There is a small perennial plant, Apium repens (creeping marshwort) which is only known to be recently found at two sites in the – Port Meadow in and our very own, Walthamstow Marsh.

In 2002, botanist Brian Wurzell found young plants of Apium repens in the ditches on Walthamstow Marsh.
The plants flowered with the characteristic long peduncle and bracts of Apium repens. It was later confirmed that the plants were very similar to the forms on Port Meadow. In 2003 cattle were re-introduced on Walthamstow Marshes to maintain the open conditions the plant requires. In the summer of 2004 A. repens had hundreds of inflorescences.

Fast forward to Walthamstow 2017 and how fares the rarest of plants on the marshes?

Answer = to be confirmed.

There are two small patches of an Apium species on Walthamstow Marshes surrounded by marker stones, presumably at the place of the 2002 repens discovery, one bigger than the other.

Larger specimen on the left, smaller on the right.

There are also many other patches of Apium in the surrounding ditch and Bomb Crater Pond: 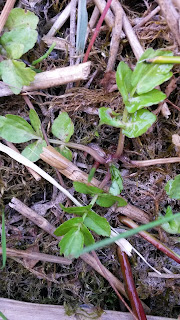 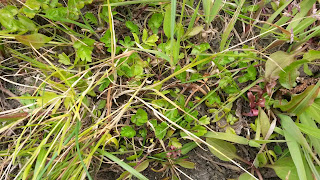 Here’s where it gets interesting (frustrating). Apium repens has a close relative, Apium nodiflorum (AKA fools water cress), which it closely resembles and also hybridises with, forming the hybrid, A. x longipedunculatum.

In the above May 2017 photos, the leaflets are a little longer than wide, a feature of Apium nodiflorum. Apium repens has more or less orbicular leaflets, and has up to 6 pairs of leaflets.

All would become clear when it flowers in the summer.

Fast forward to summer… and sadly, it’s Apium nodiflorum all round so far.

For a positive Apium repens id, you are looking for something with leaves about as long as wide, with a flower stalk much longer than the stalks supporting the individual rays, and with bracts at the point where the peduncle divides to form the rays. It also roots at all the nodes. 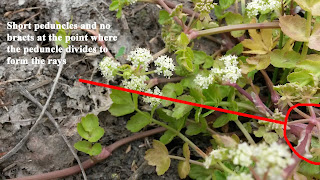 The biggest stone circle patch has short peduncles and no bracts at the point where the peduncle divides to form the rays. The smaller stone circle Apium is not currently flowering.

Short peduncles and an absence of bracts are equally apparent with the numerous other Apium patches on the marshes: 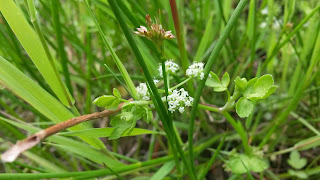 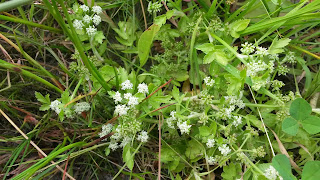 The following annotated photo and sketch are good examples: 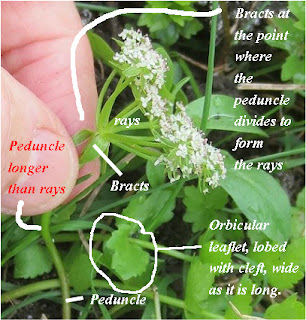 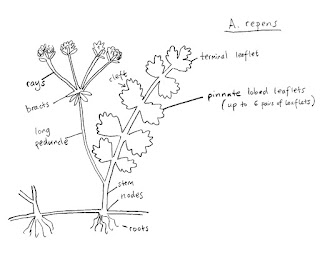 LNHS Recorder and Forensic Botanist, Mark Spencer, photographed a patch of Apium repens on the marshes in September 2016. So, hopefully it is still there, somewhere.
Posted by Walthamstow Birders at 00:27 No comments: 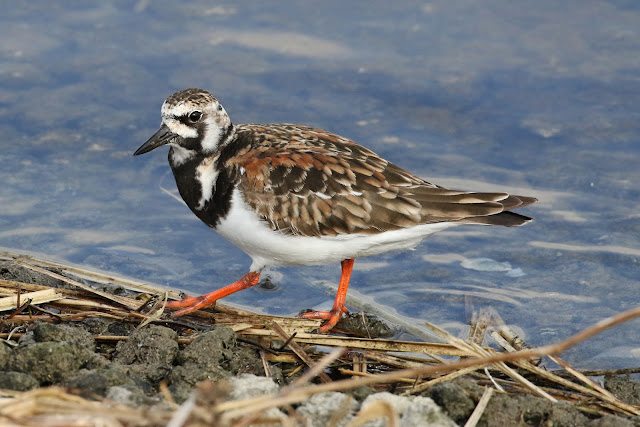 May - in keeping with most London sites - was mediocre rather than marvellous. But along with expected late summer visitors, it did provide the first Osprey of the Spring together with Turnstone and Sanderling to take our wader count for the year to 19 and the year list at the reservoirs to 128. Last year, however, we hardly added any new species to the patch list in the last six months so we have to hope the autumn proves more rewarding in 2017.

Three tame Barnacle Geese dropped onto No 5 on the 23th  but unlike last year's bird disappeared overnight. A couple of pairs of Gadwall hung around until the month's end while a female Teal and a pair of Shoveler on the 6th were late records. The newly planted reeds seem to have encouraged more Pochard to stay with a mother and two young seen on No 1 on the 29th while Shelduck numbers also seem higher than usual. 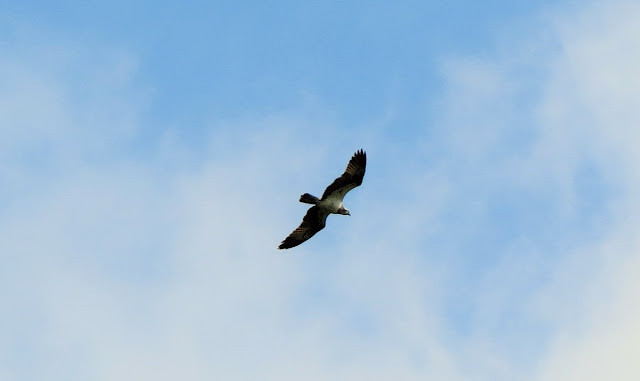 Red Kites were recorded on the 21st and 28th while a record ten Buzzards, in a month in which they were relatively scarce were seen on 14th. It had looked as if Osprey would escape us this Spring until LB had a late bird on the 25th - a fitting reward in taking part in filming for the Wildlife Trust. There was, however, disappointment when the female of the Peregrines which appeared to be breeding was found dead under its nesting pylon early in the month. The first Hobby was seen on the 4th with two other records on the 6th and 11th. 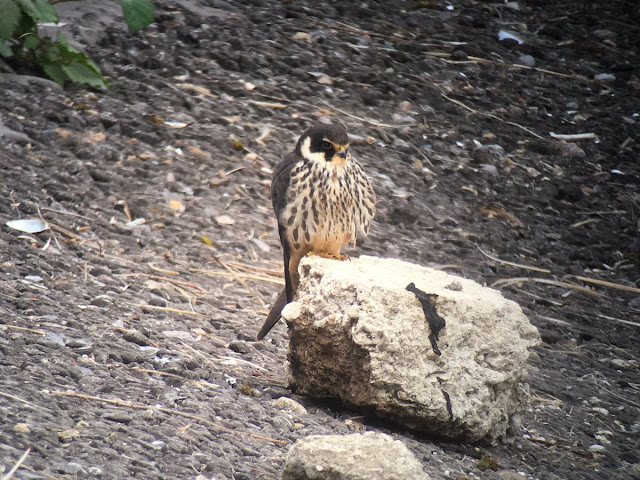 It continues to be a good year for waders both in diversity and numbers - at least until the 23rd after which none could be found on the reservoirs at all. Oystercatchers have been much more regular than in the past when they have often proved difficult to get on year lists with singles or a pair seen up to the 23rd.After the large numbers when No 4 & 5 were drained, in contrast there were  only two records of Little Ringed Plover while Lapwing, for some reason, continue to be outright rare with just two on the 4th.

Three Sanderling flying south over Lockwood on the 17th was fitting reward for PW and JP braving the drizzle. They are annual but usually solitary. Dunlin were recorded on the 1st and 11th while a Snipe lingered at the top of No 1 to the first day of the month. A Whimbrel.  unusually,  rested on the bank of Lockwood on the 4th after two had been, rather more typically, been seen flying over east on the 1st. The only record of Redshank was a single on the 5th but the same day saw three Greenshank together. 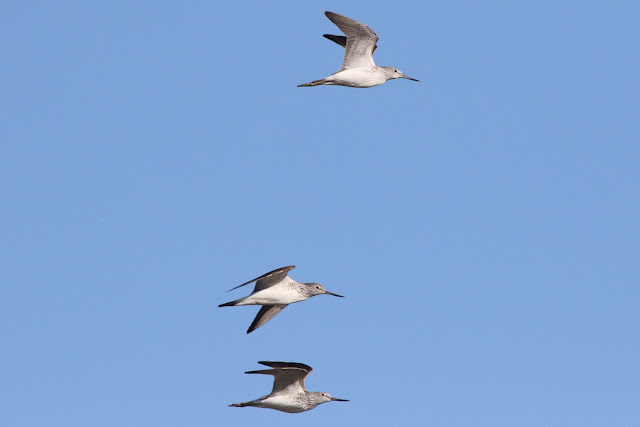 A trio of Greenshanks on the 5th captured by jarpartridge

Common Sandpipers peaked with 10 on the 5th with the last being seen on the 14th, We had not one but two  Turnstone with the first on East Warwick on the 4th and 5th and a different bird confirmed from photographs on Lockwood on the 9th and 10th.

In comparison to waders, we did poorly for gulls and terns with no marsh terns at all and only a 2cy Yellow-legged Gull on the 12th to interest our larophiles. Our resident Common Terns appeared to arrive back on the 1st with 10 around Lockwood and on East Warwick with numbers building to 24 on the 10th.  Passage of Arctic Terns was slim with three seen on the 3rd, a single on the 5th, six on the 8th dwindling to four next day.

The first large arrival of Swifts was also on the 1st after small numbers in April. Yellow Wagtails were recorded on six days with three on the 8th the peak count. The first and  only Whinchat of the Spring on the reservoirs was seen on the 4th with a late male Stonechat next day. Wheatears  continued to be pretty thin on the ground with the last on the 20th

A singing Garden Warbler for at least 10 days from the 8th in the willows at the top of No 1 allowed us all to compare its song with the surrounding Blackcaps. It's the first potential breeder on the reservoirs itself for a couple of years although they are found on the patch to the north and south. Spotted Flycatchers are much more regular in the autumn so singles on the 16th and 28th - both found by JP - were a surprise. A single Jackdaw was seen on the 2nd with two on the 12th. 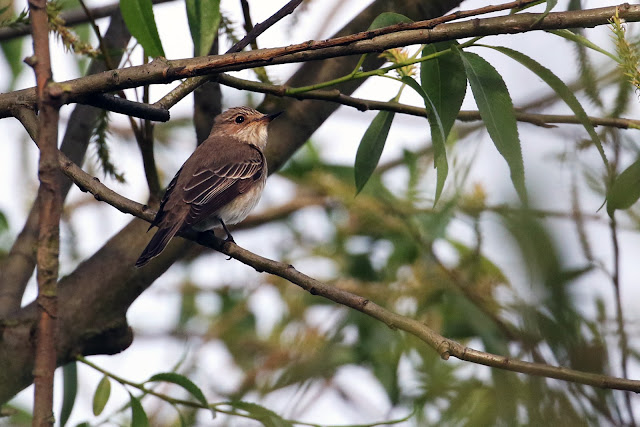 On the non-bird front, the reservoirs' carp population has sadly been devastated by disease. The worst affected has been No 1 with more than 600 dead fish found. The outbreak has led to coarse fishing being suspended.

Posted by Walthamstow Birders at 18:17 No comments: