That Walthamstow record goes to Sue Huckle,
with her 2 male REEVES' MUNTJAC at the WaterWorks NR. 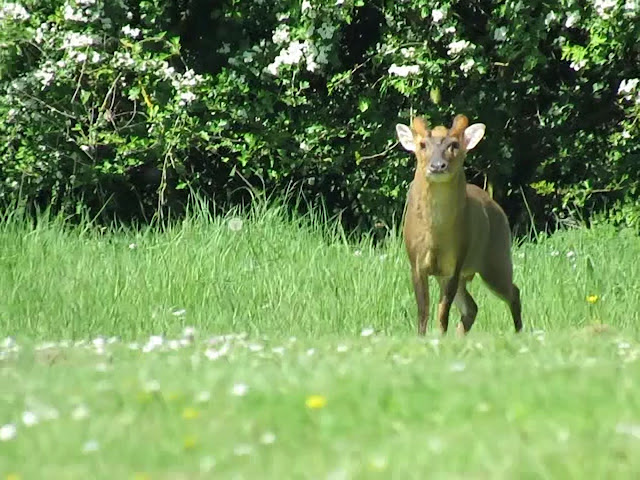 Sue's first sighting was on the 1st of April and her photos were not an April fool.

And her videos of two different males sealed the deal!

To give the discovery some context, take a look at where 'order' is in relation to 'species' here:

@grahamhowie
Posted by Walthamstow Birders at 14:02 No comments: 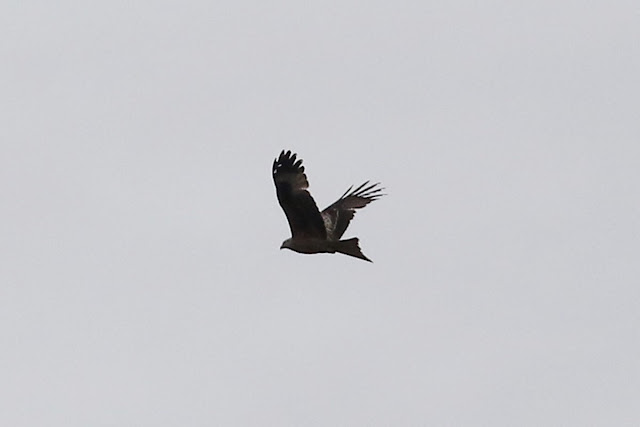 Walthamstow's first ever Black Kite pictured - and identified - by @jarpartridge

The reservoirs' extraordinary run of rarities continued this month with the first ever Black Kite and the first Hoopoe for 25 years. Neither were as obliging as some of the other good birds this year but there was plenty more to see. April also brought a very obliging Ring Ousel, two Ospreys, a flock of Brambling, at least one Sandwich Tern and eight Scoter as well as the arrival of pretty well all the expected summer migrants. 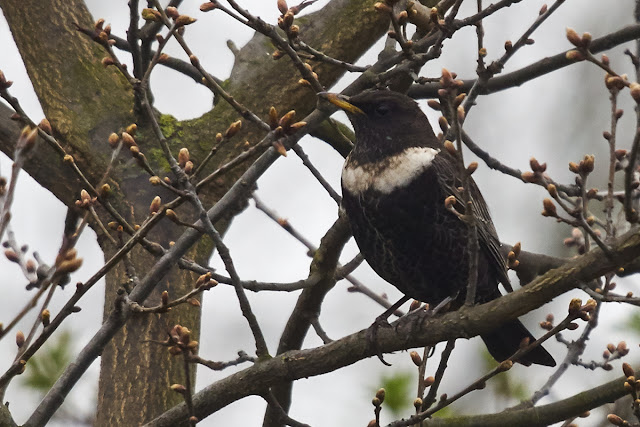 In all, 19 species were added to the reservoirs' year list to take it to 126, five ahead of this time in 2017. As well as those species already mentioned, April saw Sedge Warbler, Swallow, Reed Warbler, House Martin, Common Tern, Yellow Wagtail, Greenshank, Lesser Whitethroat, Arctic Tern, Common Whitethroat, Whinchat, Swift and Hobby recorded for the first time this year. The only disappointment was that poor weather for passage on the 28th kept the annual patch day list low with just 78 species recorded, one short of last year's already below-average total.

Even for a month renowned for its mix of weather, the conditions this month were very varied. It included a heat-wave with the highest April temperature for 70 years in London and a wet, windy and cold end of the month which saw migration halted and hundreds of hirundines frantically trying to feed over the reservoirs. 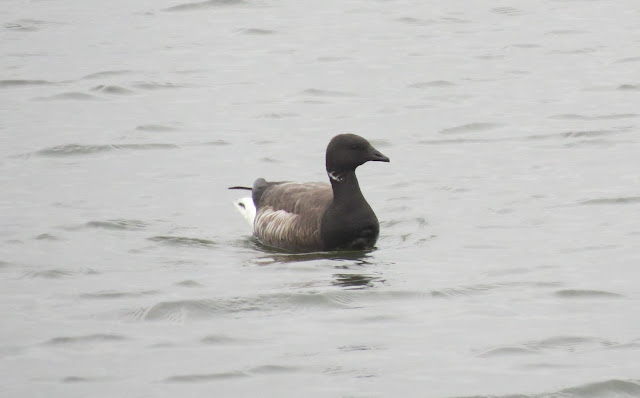 The second Brent Goose record of the year was a bird found by LB which dropped in briefly onto Lockwood on the 11th before carrying on its migration. Shelduck numbers continued to build up during the month with a top count of 31 on the 24th. As many as seven Shoveler remained in the week leading up to the patch day but, as usual disappeared, for the count itself. A drake Wigeon appeared at the same time as the Brent Goose on the 11th while up to six Red-crested Pochards were seen early in the month. 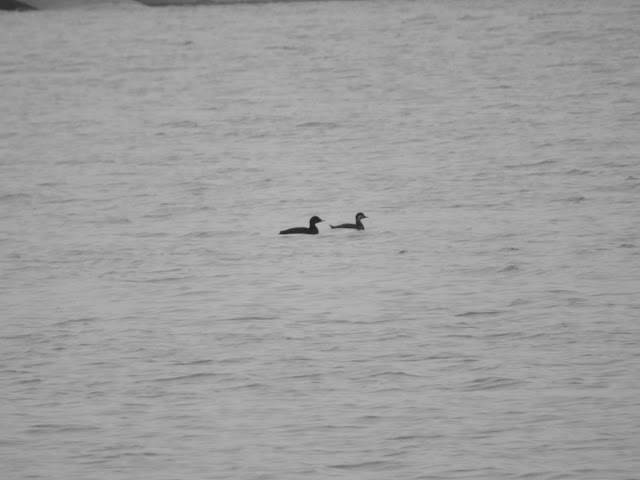 Overnight sound recording has revealed that Common Scoter migrate overland in good numbers so it is no surprise that bad weather brings down birds on inland reservoirs and lakes. London had a very high number this month and Walthamstow did not miss out. DDL found two on East Warwick in heavy rain on the 8th, giving QG a surprise house tick. The duo were presumably the same birds on Lockwood next morning and grew to eight by lunchtime before departing when the rain stopped. Goldeneye stayed until at least the 13th when three were seen while the last Goosander was a female on the 5th.


Spring is the best time for Red Kite on the reservoirs so records on at least five days with two on the 11th, 16th and 22nd were not unexpected. What was a complete surprise - including to those watching it at the time over East Warwick - was that a bird early on the 24th was Walthamstow's first ever Black Kite. JP deserves real credit for taking a whole series of shots and then following up his nagging doubts about the bird with a forensic investigation. Amazingly, it was the second Black Kite he had found within a week and was seen across London as the morning went on. A more detailed account and photographs of the kite - and other Walthamstow birds - on perdixbirding.wordpress.com 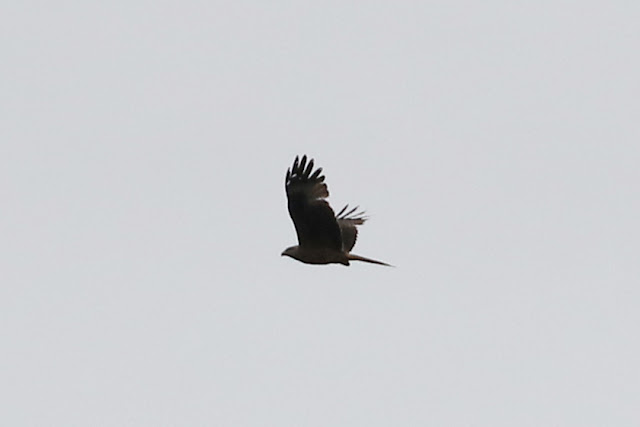 As expected, Buzzards - either passage birds or wanderers from Epping Forest - were recorded regularly throughout the month with eight on the 5th the highest count. Ospreys are far rarer but are now annual with PW finding a distant bird on the 2nd and PR a second on the 13th. The first Hobby of the year was seen on the 23rd. A Water Rail was still around the No 1 reed bed on the 11th.

It was, however, a disappointing month for waders except for a report from an unknown observer of 36 Bar-tailed Godwits going north over Lockwood on 29th. It is a big number for the reservoirs but it was on a day when there were several large flocks seen around the capital. But otherwise there were just  regular appearances from a pair of Oystercatcher, a relatively poor showing from Little Ring Plover with a maximum of two on the 8th,a single Greenshank on the 12th and a Dunlin on the 26th. The first migrant Common Sandpiper appeared on Lockwood on the 8th building up to seven on the 24th while Green Sandpipers seemed to disappear for the summer on the 9th after three had been seen on the first day of the month. 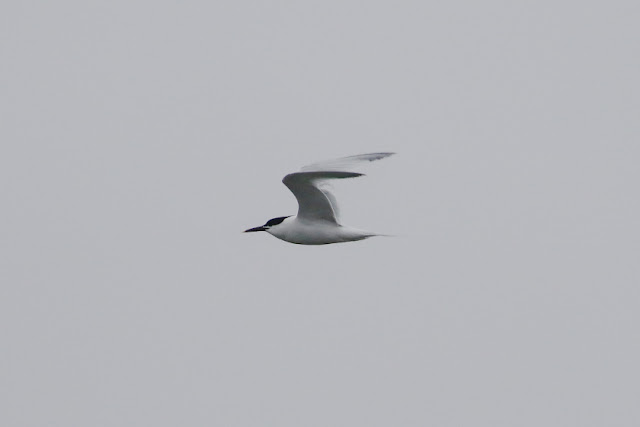 The first Common Terns of the year were two birds flying fast north on the 5th with what seemed like an early potential breeder arriving and staying on the 20th. Arctic Terns only pass through on their way north with three on the 16th and two on the 28th. Sandwich Tern are much scarcer so a single seen on 9th, 10th and 12th may have been the same bird touring the valley reservoirs.

The return of the Swifts is as eagerly awaited as the first Wheatear but they kept us waiting this year with 30 arriving in a rush on the 23rd, a week after the first was seen last year. On the 6th, LWT volunteers found an odd-looking bird feeding on the path between No 1 and 3 reservoirs and quickly realised they were watching a Hoopoe. They did not recognise how rare it was as it wasn't until next morning that the news was passed onto regular patch watchers. Fortunately, it was still around the old hide for the  the lucky four who first came to check it out but unfortunately although it seemed to fly back into the same area, it was never seen again. The last Hoopoe at the reservoirs was in October 1993 - also at the bottom of No 3 although there was an equally flighty bird at the Waterworks three years ago, 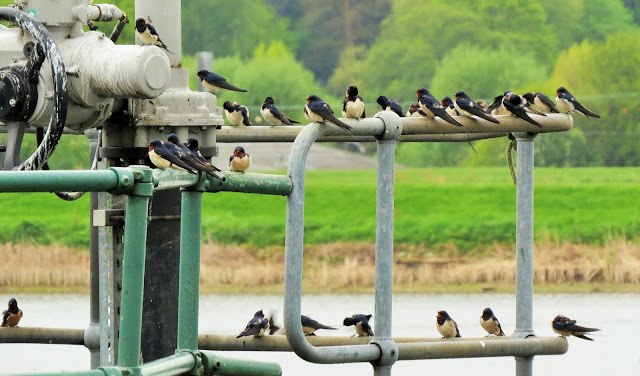 The first Swallow was on the 3rd with small numbers trickling through until the end of the month when the dreadful weather saw hundreds forced to halt their journey north and search for food over the reservoirs. They rested on anything they could find with more than 70 lined up on the concrete bank of High Maynard on the 30th.  A single House Martin was seen on the 5th, eight days ahead of last year but the local breeders, like Sand Martins, did not arrive back until much later in the month. Yellow Wagtails, with the first on the 7th, were five days later than 2017 but they were recorded on at least eight days and often on the ground rather than just flying north.  There was a nice passage of White Wagtails, too, with 14 counted on the 11th.

A Whinchat was attracted to the new flower meadow on the 20th while Wheatears, at least compared to the dismal Spring showing last year, were much more common. As usual, we had to wait a couple of weeks after the early pioneers but birds, often in small parties,, were seen regularly after the 2nd with the highest count of seven on the 22nd. 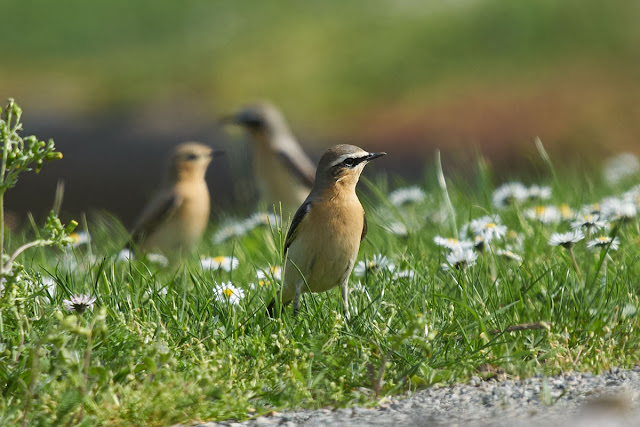 A party of Wheatears enjoy the sunshine on Lockwood pic @owlturbot

Ring Ousels are supposed to be wary but no one told the male first found by GJ in what is now known as Hoopoe hollow on the 11th. It moved to the busiest section of the reservoirs just south of the engine house where it fed and rested for the next four days, unperturbed by the steady procession of visitors. A tardy Fieldfare was still at the reservoirs on the 17th and two Redwing remained until at least the 10th. 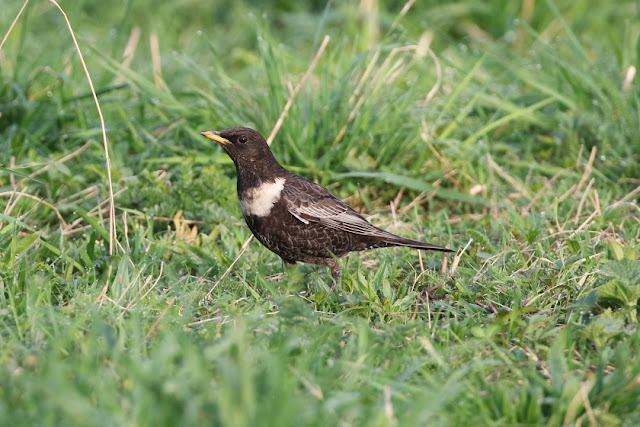 The tamest Ring Ousel anyone can remember seeing pic @jarpartridge

The early warblers seemed to prefer the waterworks rather than the nice new habitat at the reservoirs with the first Reed and Sedge Warblers not being seen until the 14th, days after they had returned to the marshes. It was five days later than the first singing Sedge last year but actually a day earlier than the first singing Reed. The 14th also seen the first Lesser Whitethroat with six being seen on the 19th. This was the same day the first Common Whitethroat arrived but, unlike the last species, these seem scarcer at the reservoirs so far.  Blackcaps, in contrast, seem very common with singing birds widespread after the 5th. Willow Warbler passage seemed slim but at least one could be heard singing most days.

Rooks at the reservoirs are often singles and usually just flying over as was the case with one on 6th so four resting on the filter beds on the 17th were an uncommon sight. So was a flock of Brambling which was first found by QG near the engine house on the 10th before moving to the trees behind the fishermen's hut on the corner of No 4 and 5. At their maximum, there were at least eight, including a couple of lovely males, with two remaining until the 14th. 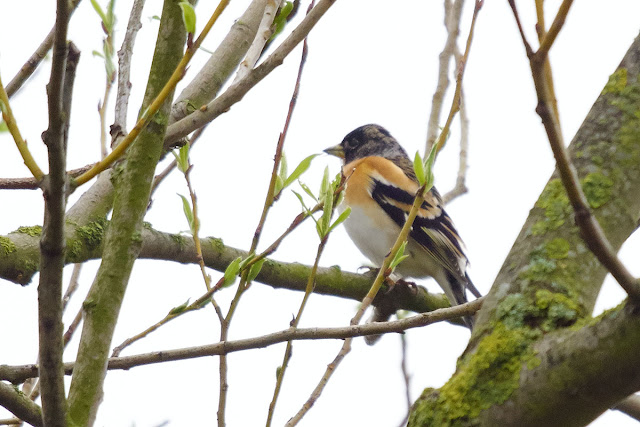 One of the male Brambling pic@owlturbot

Two Siskin were seen on 8th and two Redpoll on the 5th. After 77 days and a huge amount of enjoyment to a great many birders, the Little Bunting was last seen on April 6. It may be a long time before we get another but then we said that about our recent run of rarities and the reservoirs keep surprising...


Posted by Walthamstow Birders at 21:32 No comments: