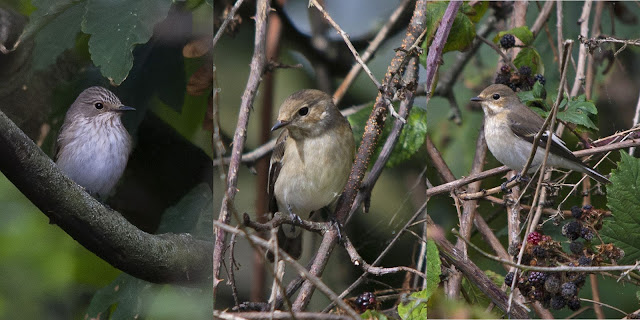 August was another excellent month with a good array of waders, raptors and passerines passing through the reservoirs although their visits were often frustratingly brief. Records included the first Wood Warbler since 2016 and the first Marsh Harrier since 2018 as well as Pied Flycatcher, Great Egret and Black Tern. Skylark, belatedly, and Common Redstart were also added to the annual list.

The month also saw the second and third Ospreys and Greenshanks of the year and the second Turnstone as well as tagged Mediterranean Gulls and Tufted Ducks which proved again how far some birds come to enjoy the safe haven the reservoirs provide.  The seven new species take the 2020 year list to 130 - four more than this time last year. 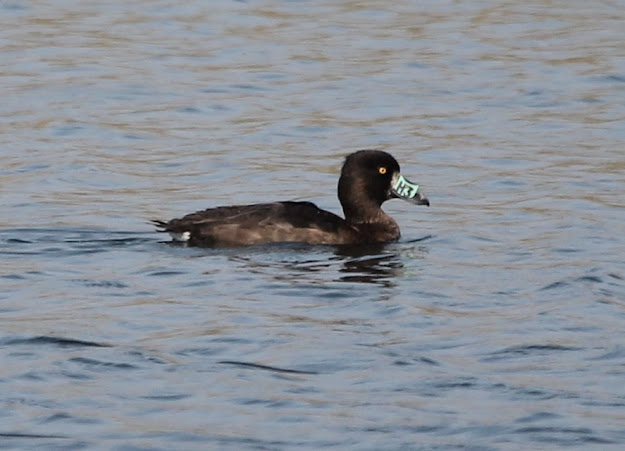 At least two young Shelduck liked the Wetlands so much that they stayed on No 3 right through the month despite the disappearance of their parents and siblings to the coast. The reservoirs remain a nationally-important site for Tufted Ducks to carry out their post-breeding moult. A count early in the month recorded 2,100 across the reservoirs, slightly down on last year's 2246 but above the 1900 of the year before. Among them on High Maynard on the 7th &10 was a bird fitted with a nasal saddle at Mayenne, 140 km WSW of Paris in June 2018. It is the third time that Tufted Ducks from the French ringing scheme have been recorded at the Wetlands in recent years. Teal, Shoveler and Gadwall all returned in small numbers with seven Shoveler back on East Warwick by the 30th. 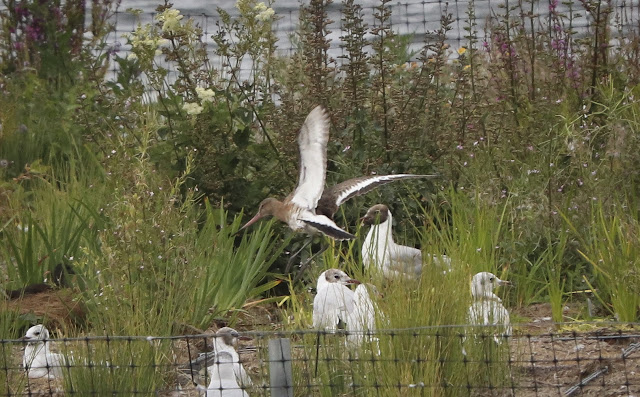 The Wetlands continued to draw in waders with 11 species seen during the month, a far better performance than last year. A flock of eight Oystercatchers over west on the 23rd was the largest number that can be recalled with, more typically, one on the 3rd while a single Lapwing was seen on East Warwick on the 14th &15th.  A Whimbrel flew south on the 13th while another Black-tailed Godwit rested on the East Warwick raft on the 4th.  After the first Turnstone for three years last month, it was inevitable that the second would follow almost immediately with a single photographed by SN flying south over Lockwood on the 8th. 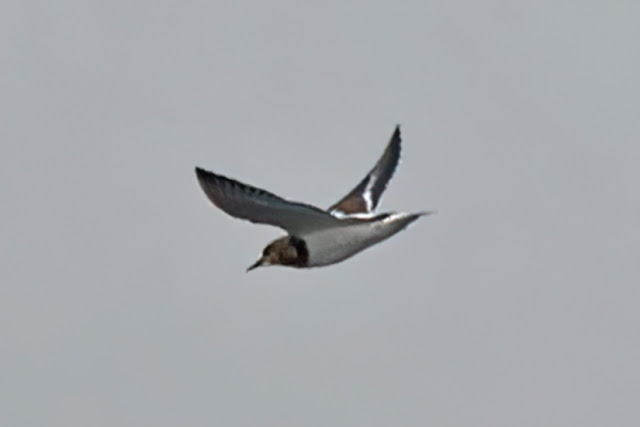 The second Turnstone of the year, like the first, sadly did not stop pic @sjnewton
Dunlin were seen on the 3rd and 24th with the first Snipe of the autumn on the 17th. Common Sandpipers were present throughout the month with the maximum count of 19 on the 11th, slightly below last year's peak of 22. Single Green Sandpipers were recorded on the 7th, 25th and 28th. It was a good month for Redshank with individuals on the 3rd, 10th, 11th, 14th and two on the 27th. The 10th also saw the second Greenshank of the year which remained until early the next morning with another on the 17th. 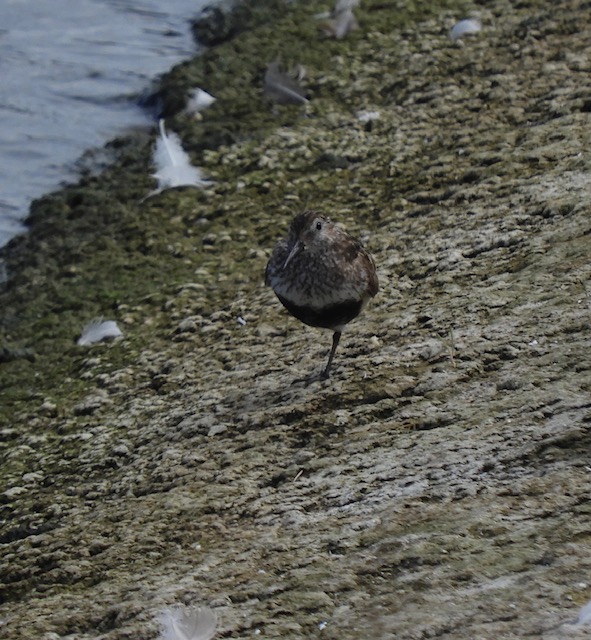 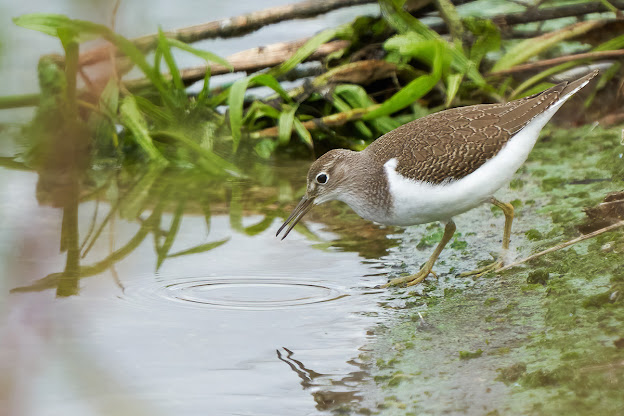 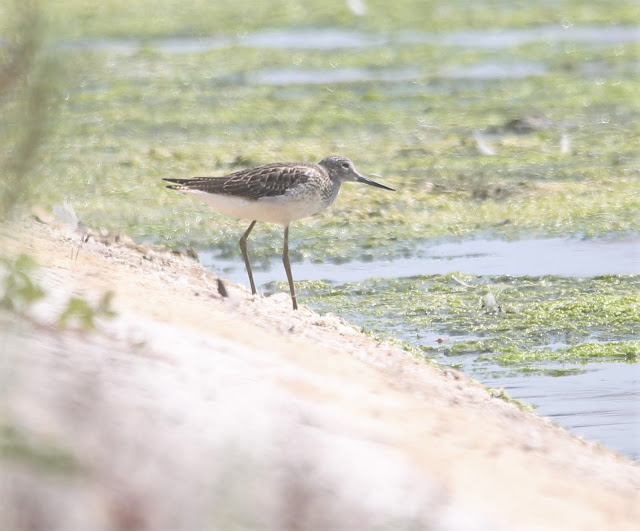 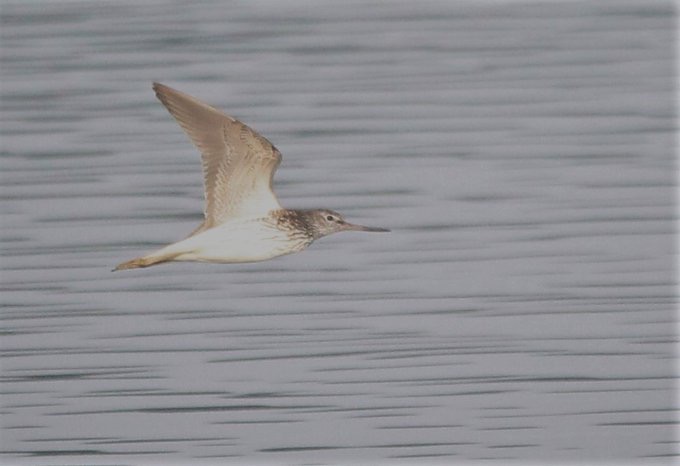 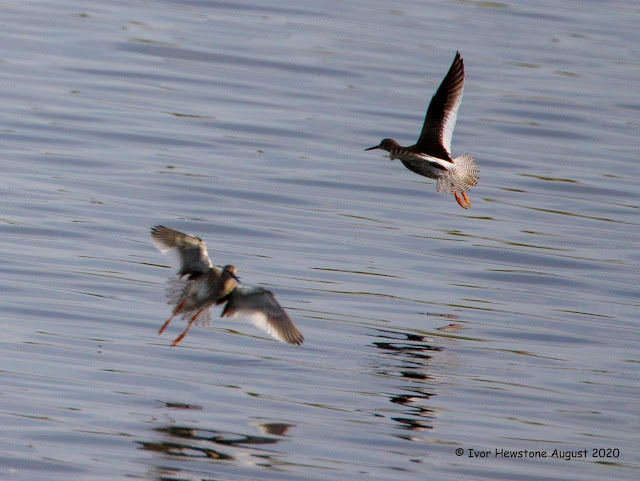 Two Redshank on Lockwood pic @IvorHewstone
It is not just ducks which travel a long way to the Wetlands. For the third year, a Black-headed Gull which breeds in Poland returned to Walthamstow. Even more remarkable, was the colour-ringed juvenile Mediterranean Gull found and photographed by RE on the 9th. It turned out to have been rung at its breeding colony in the eastern Czech Republic on June 17th, less than two months before being seen on Lockwood.  Common Terns, after successful breeding, gave some fantastic views with at least six still in residence on the 31st. The first - and perhaps only - Black Tern of the year was seen by PL flying north on the 30th. 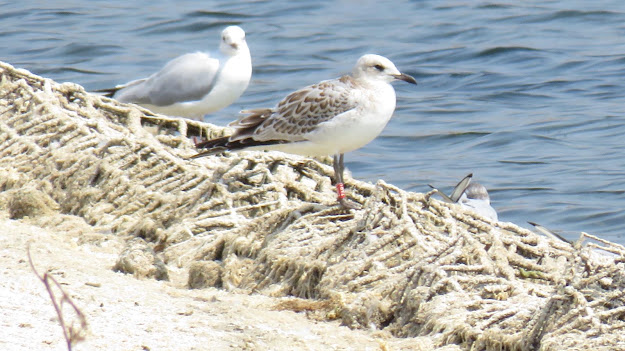 Mediterranean Gull arrived from the Czech Republic pic @wheresrhys
As breeding numbers of Great Egrets increase in the UK, they are becoming more regular, if still rare, at the Wetlands. The bird picked up by LB going north over Lockwood on the 8th was the fifth successive year they have been seen while they were only recorded once in the previous five years. 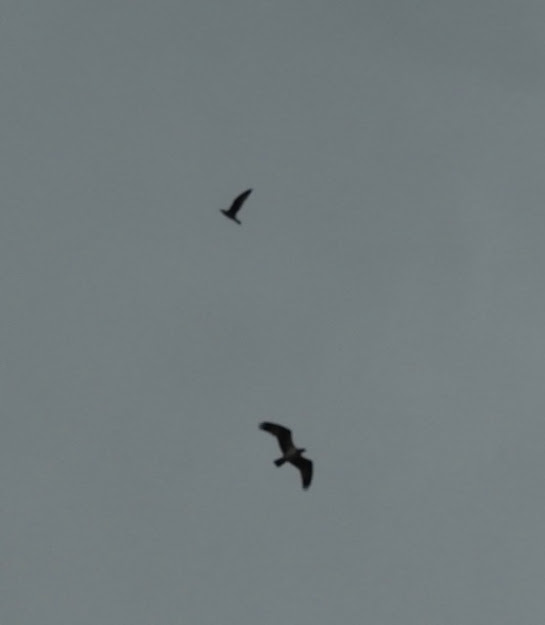 Very much a record shot of one of two Ospreys this month pic @porthkillier . 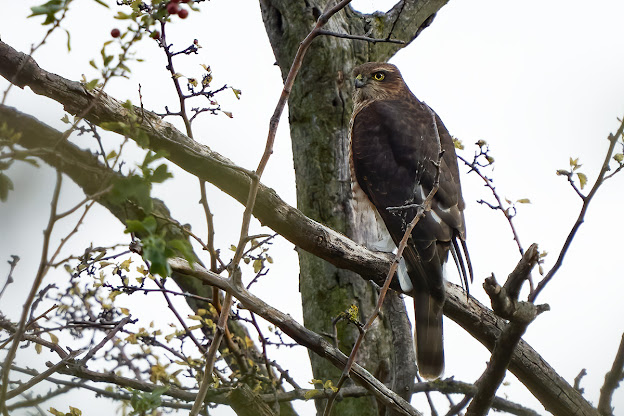 and a rather better photograph of a Sparrowhawk pic @OwlTurbot
The second Osprey of the year used the reservoirs to gain height before crossing London on the 27th with another being seen by visiting birder GB two days later. Marsh Harrier is a much rarer bird at the Wetlands with the female-type picked up by PR on the 3rd the first since May 2018. It was later seen over Wanstead. Buzzards were seen on the 4th and 28th which was also the date of the only Red Kite.  Two adults Peregrines were semi-resident on the pylons while Kestrel and Sparrowhawk were also seen regularly. The same was true of Hobby which were recorded on at least 11 days in the month with two hunting on the 2nd.
Up to 70 Swifts were still feeding over the reservoirs up until the 20th with 20 on the 25th and single figures until the end of the month along with much larger numbers of Sand and, in particular, House Martins. Swallows, however, continue to be extremely and worryingly scarce this year with hardly any passage this autumn. A Skylark, the first of the year, was found on the 8th by CF on Lockwood. 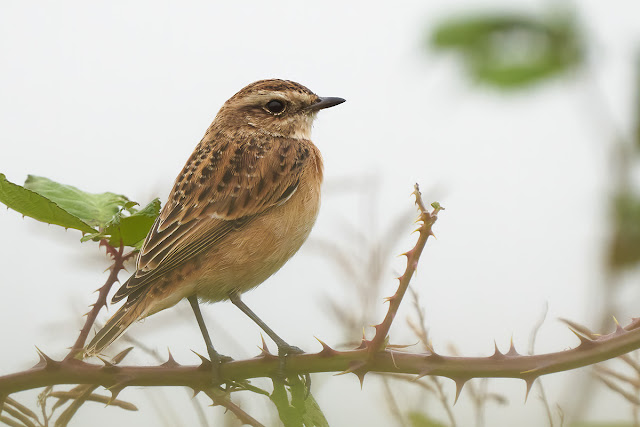 Whinchats performed well during the month pic @OwlTurbot
The Wetlands are very much in the shadow of nearby Wanstead when it comes to attracting migrants in the autumn but August did see the reservoirs record all we might expect. The star bird was a Wood Warbler found by RE late on the 19th - the first since a singing Spring bird in 2016. A female-type Common Redstart on the 10th put in an equally brief appearance.  Whinchats were rather more obliging with records on the 9th, 24th and 28th with two on the 20th and three on the 27th. 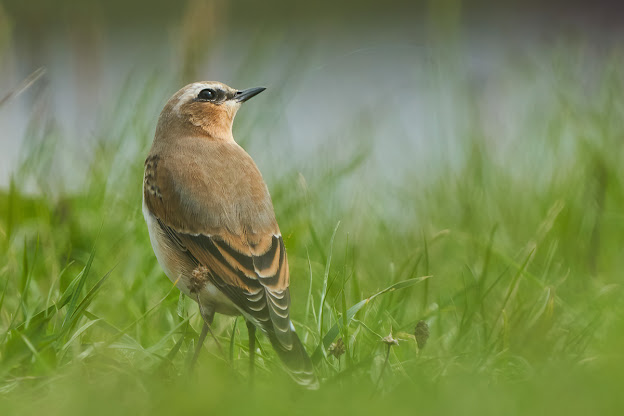 Wheatears were seen on 12 days after the 8th with a rather disappointing maximum of two on the 23rd, 25th, 26th and 28th.  It looked as if the Wetlands was going to miss out on the influx of Pied Flycatchers which seemed to have turned up in every green space in London this month until AMP saved blushes by finding one by the central pylon on the 20th. It was  joined by a second bird next day with one being seen irregularly until the 23rd. 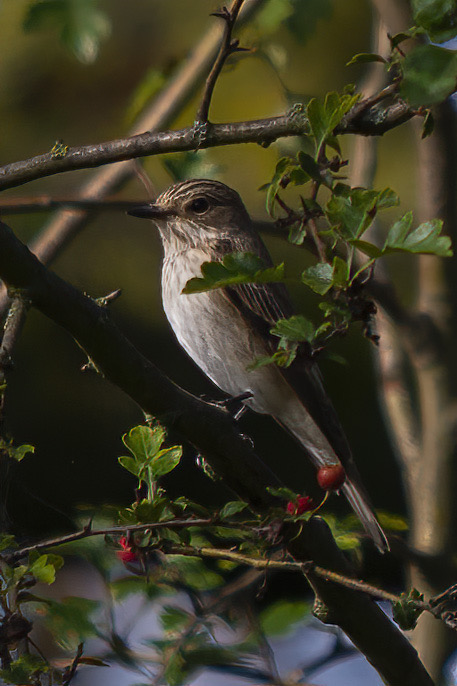 Spotted Flycatcher is a regular if scarce visitor in August pic @sjnewton
The first Spotted Flycatcher of the month was also found on the 20th with one being seen in the same trees as the two Pied Flycatchers on the 21st & 22nd, with another on the 30th.  Yellow Wagtails are also very scarce this autumn with the only records a single on the 28th and an excellent flock of around 12 seen going south by LB next day.
Willow Warblers numbers built up from mid-month but, unlike some years, daily counts did not reach into double figures. The last Sedge Warbler was recorded on the 28th although undoubtedly others were hiding as was almost certainly the case with Garden Warbler which were seen on at least two days. Common Whitethroats, Lesser Whitethroats, Chiffchaffs, Blackcaps and Reed Warblers, which all bred, were seen until the end of the month.
DB @porthkillier
Posted by Walthamstow Birders at 19:26