I have been having a few nagging patch feelings of late. I had been picking up and ticking on other patcher’s finds for a while, but feelings of not contributing significantly to the patch year list have been building.

Today I had an induction/shadowing morning at Rye Meads RSPB, as myself and another person are due to become once-a-month leaders in their 'Messy Welly' pre-school group. (thanks Sue)

As there have been a few interesting birds around lately I took my birding gear, I thought that on my way back down to Hackney Downs I’d jump off the train at Tottenham Hale and scoot round to the Lockwood and see what the rain might have brought in. 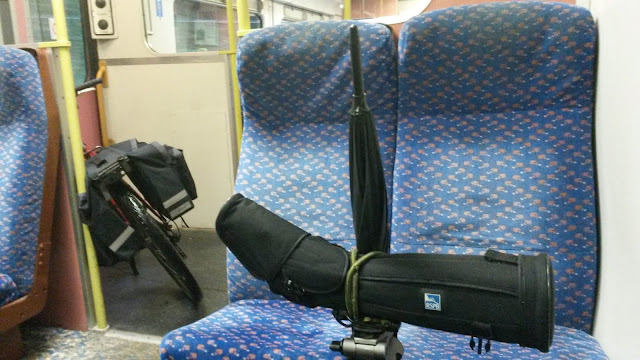 I almost went straight on to Hackney, but I didn’t, and jumped out at Tottenham. I had my bike, so I figured a quick dash along the road to see nothing and dash back couldn’t hurt.

I saw that the last sighting in the log book was on the 18th. That spurred me on a little. The place hadn’t been checked over for a few days and, with the weather, something could be waiting to be seen.

As I approached the southern tip of Lockwood I could see that the water level of the reservoir was at the lowest I had ever seen and that the edges all around were very busy with birds. There was exposed mud at nearly all the edges which are normally submerged. 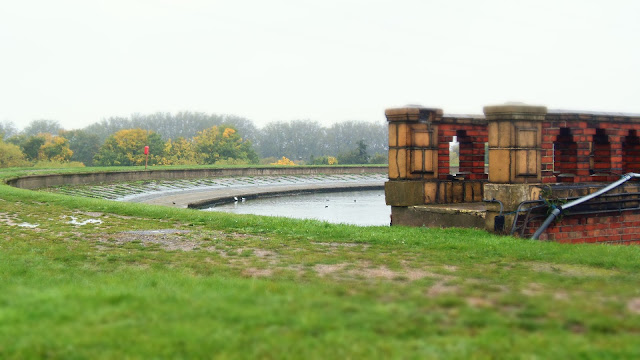 I immediately saw a Little Egret feeding along the southern edge and thought that a bit unusual. So I took a snap, thinking that that might be the most interesting bit of my visit. 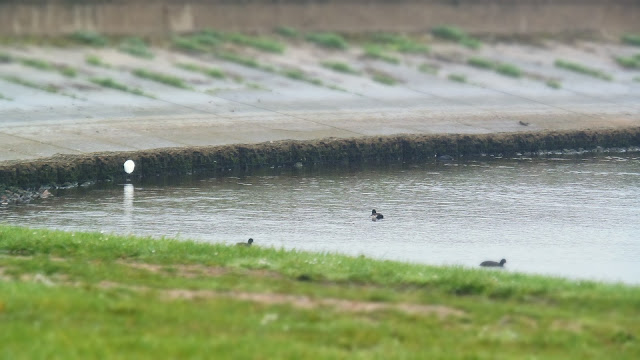 But then, I looked at the Egret again and worked backwards to find...a GLOSSY IBIS doing a similar bit of feeding.

I snapped two photos through the rain and then watched it as it took flight northwards and seemed to settle halfway up the east side of Lockwood.

I tweeted out the two pics to #londonbirds and @WildWalthamstow. I couldn’t call any of the patchers as I had lost my phone recently and my new phone had no numbers in it.

I sat down behind the southern Lockwood tower and wondered what to do next...when @birdingprof called...then @LolBodini called...next thing we were all walking up the west side of Lockwood, scanning the east side, @StuartFisher16 joined us.

There was no sign of the bird but fortunately, a short while later the GLOSSY IBIS was relocated in the drainage channel just north of Lockwood. @JW_Davies soon joined us along with Lol C. and I passed Mike M on my way out. 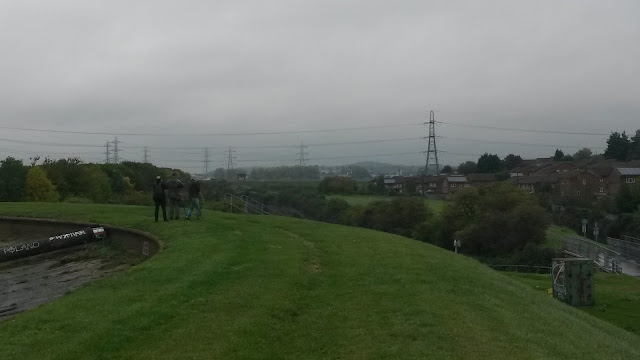 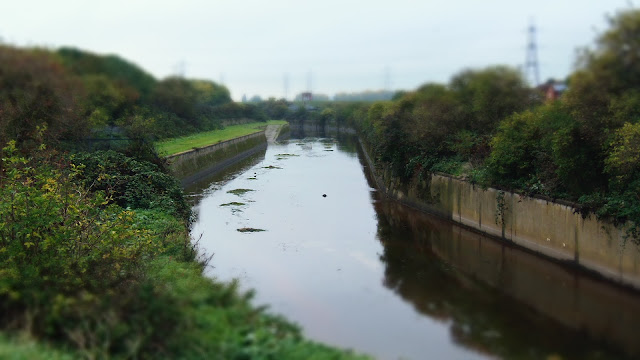 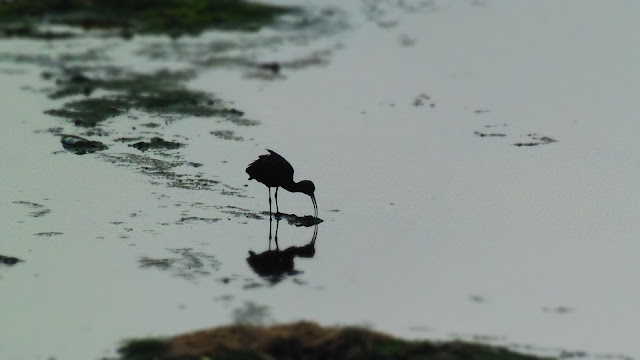 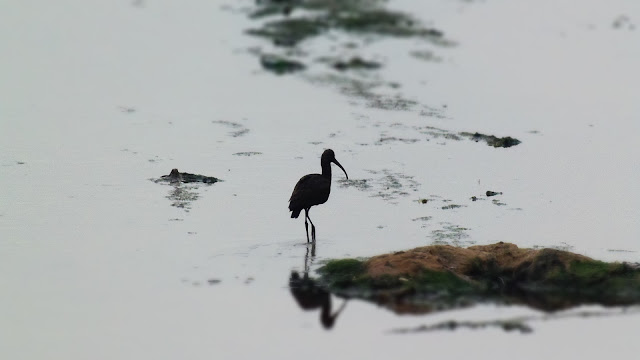 I duly recorded the sighting in the reservoir log book. 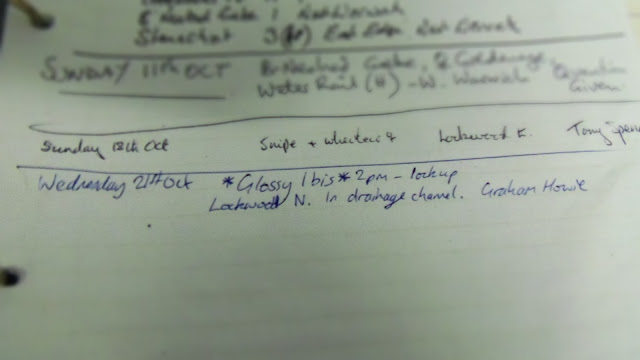 After scribbling the sighting down, the Thames water guys told me that they were locking up, I sheepishly informed them that there were a number of birders quite far up on the site checking out a rare bird. They had to give me their emergency number to text on to the people left up on Lockwood. I saw a few make it out. But there might be a few left up there...

This is the first new addition to the patchlist #247 since 22nd Mar 2012, long expected, but all credit to Graham for plugging away and getting it, and getting the news out too! Some of my dodgy shots below. PW 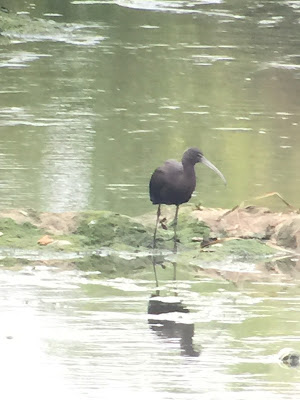 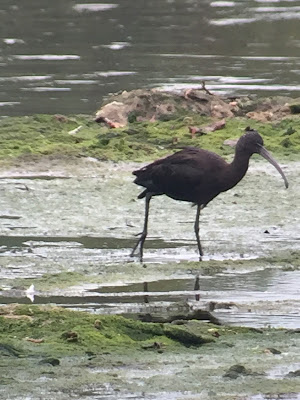 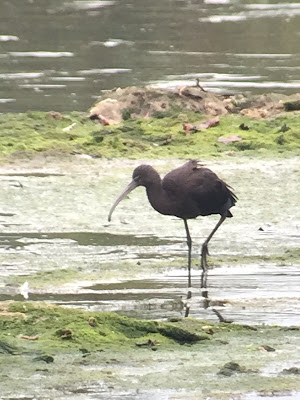 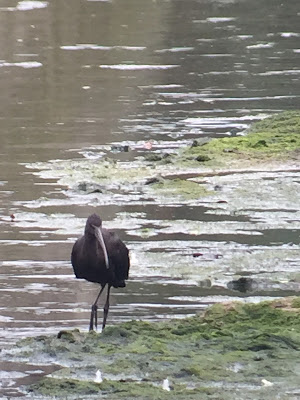 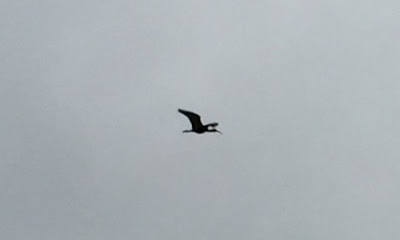 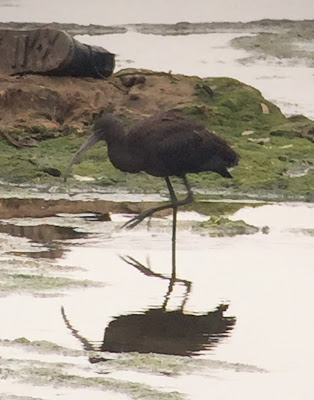 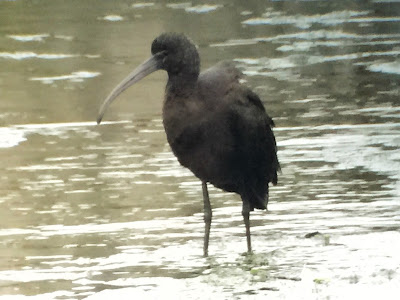 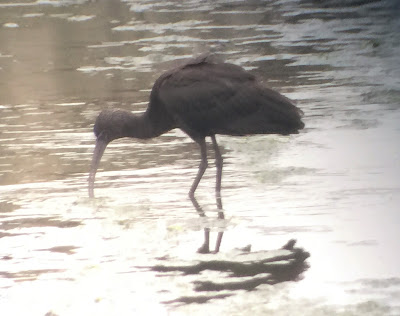 Posted by Walthamstow Birders at 23:21 4 comments:

As most of the locals are working/sickening/Scillying etc. I guess it behoves me to keep the blog alive, at least for this week, after that I’m off to Scilly myself and what do I care:-)

I’ve strategically taken off days throughout September and October in order to whizz off and see the fabulous Birds being found during the autumn. Unfortunately the Birds had a slightly different strategy and apart from a certain Phalarope my days off have coincided with nothing, nada, nil. We don’t talk about the Acadian Flycatcher, which due to a disastrous mix up arrived a day too early. Today was one of those days that was supposed to see me gadding off to Norfolk for a haul of Rare, or at least a large haul of Scarce, but again the Birds were seemingly not copied in to the memo.

So Reservoirs it was then. (I shan’t bore you with the ‘overnight rain, strong winds, must be dripping in Waders’ nonsense, so let’s move swiftly on) I thought I would check the log book in the Fisherman’s permit room in case there was anything new recorded and was delighted to find this well considered observation; I later bumped into the Community Engagement Officer for the Walthamstow Wetlands project, I wonder if she will take the suggestions on-board.

Stepping past the untidy gateway, and making sure I didn’t ingest any of the clearly dangerous water, I proceeded towards the Lockwood to see what the Wild Trust had released into the aviary today.

A 2nd winter Yellow-legged Gull on the weir by the Low Maynard is what, and amazingly it didn’t flush on first sighting me, like everything usually does from here, oh no, it waited until I had set up tripod, scope, phone adaptor, glasses and started to focus, then it did the off:-(

A Skylark flew over the Lockwood and a there was a fine 1st winter male Wheatear along the East side. A passing Lol joined himself to me and we continued on to the South side.

Lol hadn’t seen the Black-necked Grebe and I was happy to see if I could improve my picture of it from Sunday, it was still there, but the light did not lend itself to successful photography.

A Water Rail was calling from the Northern Reedbed, I had a, presumably different, Bird in the Southern Reedbed on Sunday. The Stonechats also seen on Sunday had now split up with 1 still on the West Warwick and 2 on the East Warwick.

Singing Cetti’s Warblers were on No’s. 1 & 2. A dozen House Martins, possibly locals, were around the Filter Beds and the female Goosander was still on No.4. I think it is oiled as, it is constantly preening and, it’s stayed on the same reservoir for days, they are normally so flighty. Siskins and Goldcrests were much in evidence, the former as flyovers and the latter invisible but vocal in various corners of the patch.

Nothing to set the notebook alight but 63 species was not bad and would have made a great set of padders if only we had had the big one for which to pad.