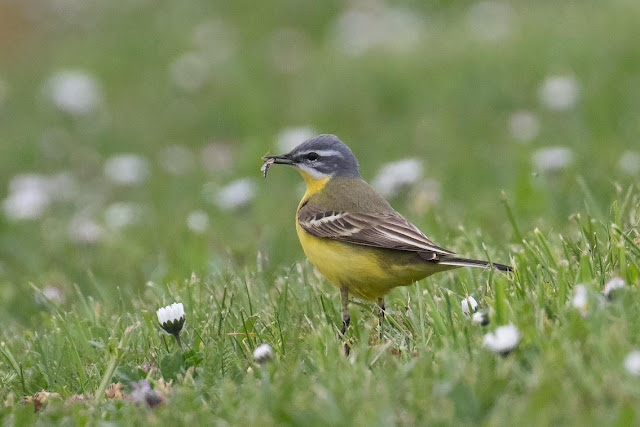 After a slow start to the year, the Wetlands bounced back to form in April. It may not have been the rarity-fest of 2018, but there was plenty of variety to see and enjoy. In one superb 15 minute period, a Blue-headed Wagtail, Osprey and 25 Little Gulls were seen within a couple of hundred metres of each other. 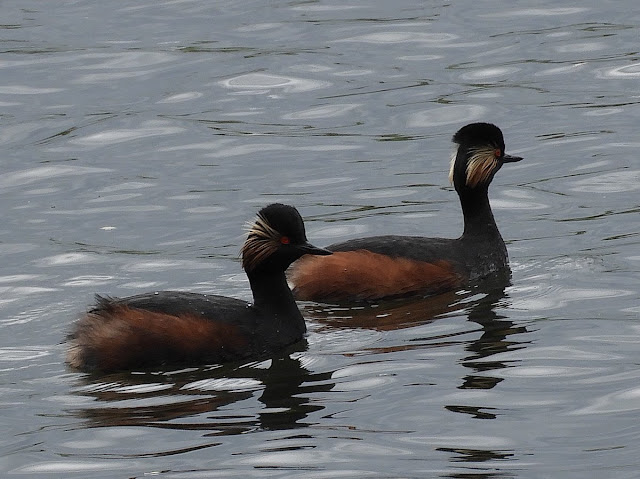 The month saw the first Black-necked Grebes and Garganey for two years which both performed well to their admirers and a male Common Redstart which was the definition of elusive. Among other highlights were no less than three Short-eared Owls, a party of three Sandwich Terns, another Avocet as well as Cuckoo and Bar-tailed Godwit.

In all, 24 new species were added to the year list - four more than the same month in 2018 - although the 113 total still lags well behind last year's incredible 126 at this stage. The only let down was that April did not produce an out-and-out rarity although it seems very likely that the big bird for the month - in all senses - passed over unseen.

While April as a whole lived up to its traditional reputation as the best month for birding at the reservoirs, annual patch day on the 27th was a big disappointment. Gale-force winds stopped migration dead in its tracks and made finding any birds which had arrived very difficult. The result was that only 68 species were recorded across the greater patch, the lowest total in the seven years the counting has taken place and easily beating the previous worst performance of 74 in 2014. 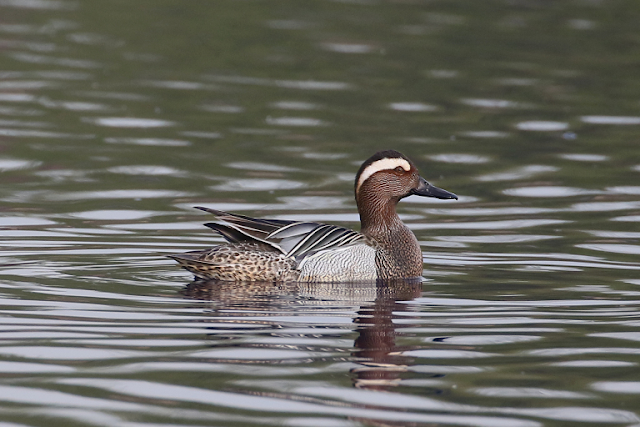 The drake Garganey which turned up on No 4 was the first for two years as 2018 was a rare blank year for this species. It was found on the 16th, went missing on the 17th, but commuted between No 4 and No 3 on the next two days. It clearly took a liking to the Wetlands because it turned up again in the same corner of No 4 on the 30th. 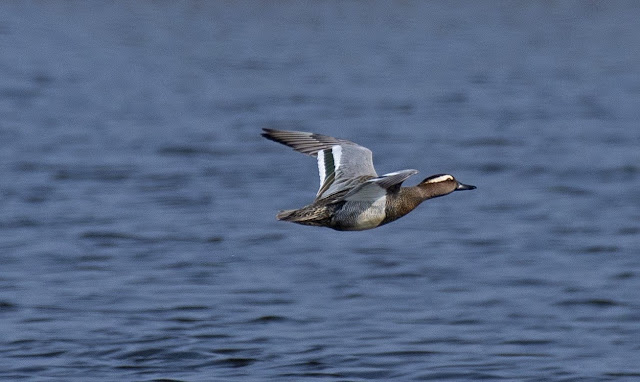 The cold winds which held up summer migrants may also have held back wintering birds from departing. The last Shoveler normally leaves just before patch day but this year six remained until the 28th with two until the end of the month. The wintering drake Scaup stayed almost as long with the last sighting on the 23rd - almost a month longer than its previous latest departure day. Let's hope it has a good summer wherever it goes and returns as usual in early December for its sixth winter. The last Goldeneye left on 16th, again three days later than last year.

Like Garganey, Black-necked Grebes are pretty much annual so their absence last year was a surprise. It made a confiding pair in full-summer plumage on No 4 on the 24th all the more appreciated. For the second month on the run, however, it seems likely that a good bird was missed despite being looked for.  This time it was a White Stork seen over Wanstead on the 16th and then half an hour later over Alexandra Palace which means it must have been visible from the reservoirs if not actually above them. 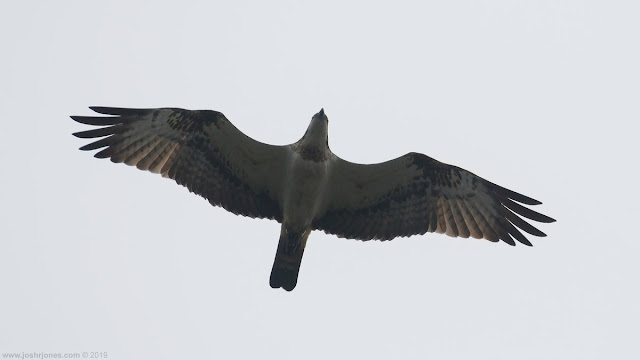 Little Egrets, however, can't be missed and there was very good news about breeding with a visit to the islands discovering 37 nests on No 1 & 2. Grey Heron pairs  are holding steady with 44 nests - with 30 pairs on No 1 - but it seems only a matter of time that they are overtaken by Egrets. April is the best month to hope to see a passing Osprey with one so low over East Warwick on the 8th that photographs showed not only that it was rung but enough of the ring to suggest it was likely to be a Scottish-born bird. Two Buzzards were seen on the 3rd with singles on the 10th, 17th, 20th, 25th & 30th with Red Kites also on the 3rd, 10th and 16th. 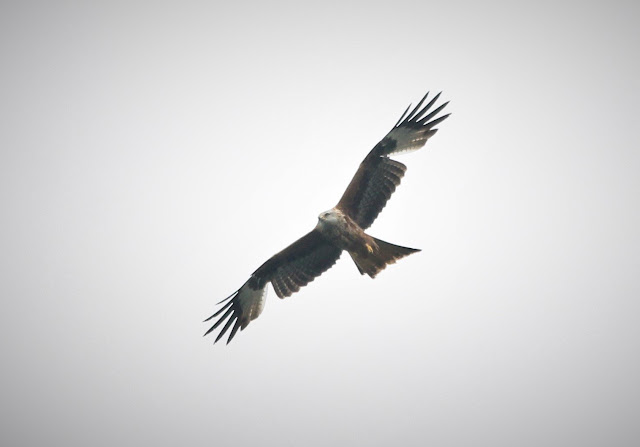 A second Avocet for the year turned up on No 4 on the 9th. A day earlier, the same murky conditions saw two Ringed Plover fly north low over Lockwood in the company of two Dunlin, both the first records for the year. 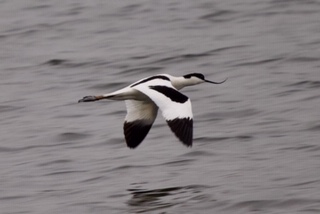 Little Ringed Plover were seen so regularly on East Warwick during the month that it is suspected they must be holding territory nearby, perhaps on the filter beds. The first Whimbrel of the year were two which dropped onto East Warwick island on the 23rd, with another on the 25th and two more on 28th. 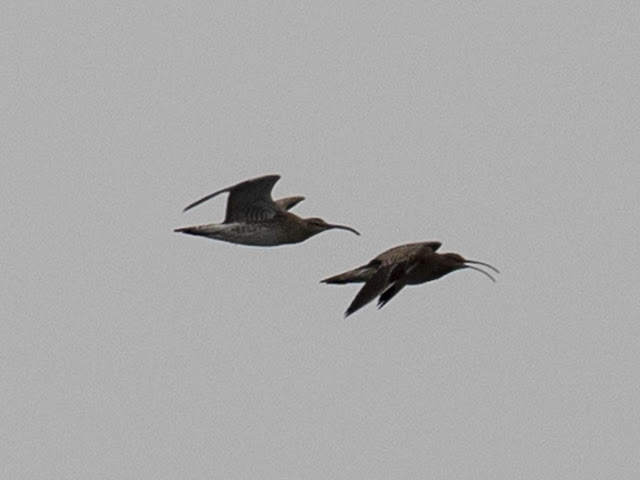 The third Black-tailed Godwit of the year - another confiding bird - was found on East Warwick on the 6th. Much less common at the reservoirs are Bar-tailed Godwits so the one picked up high over No 4 on the 30th by JP could easily be the only record of the year. 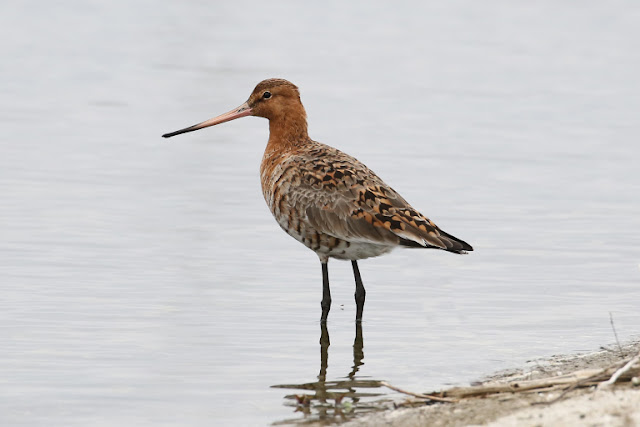 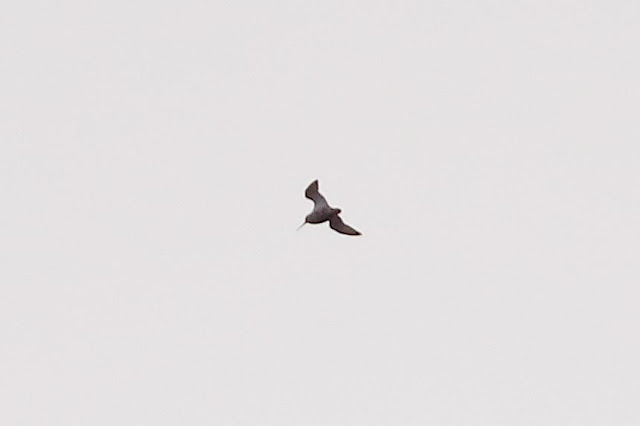 The only Redshank of the month was a single on the 1st, the sole Oystercatcher was on the 22nd while late Snipe were recorded on East Warwick on the 16th & 18th. Good money could have been won on a bet that Common Sandpiper was going to be the last of the common waders to be seen in 2019. But with no wintering birds this year, the first was not seen until the 15th - a week later than what was thought to be the first migrant last year. The maximum count was eight on the 24th with none being recorded on the last few days of the month. A passage Green Sandpiper was on East Warwick on the 25th. 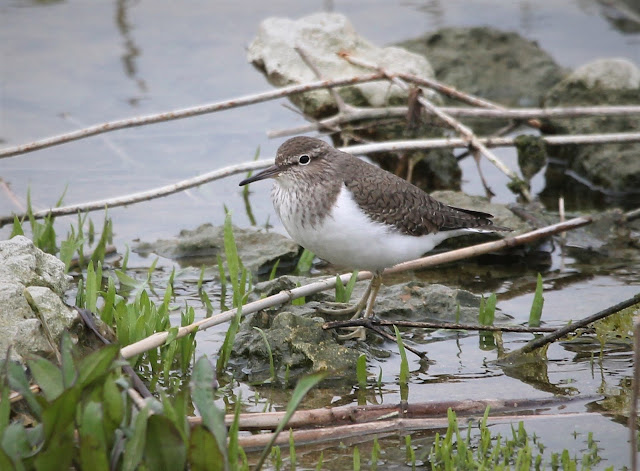 The persistent north easterly wind and cloudy conditions saw remarkable numbers of Little Gulls pass through London this Spring. Walthamstow got its share with a single on the 6th, then at least 27 including a flock of 25 on the 8th, 11 more on Lockwood next day and a final individual on the 25th. For context, the large flock is about five times as many Little Gulls as I have seen in total in 30 years of watching the reservoirs. 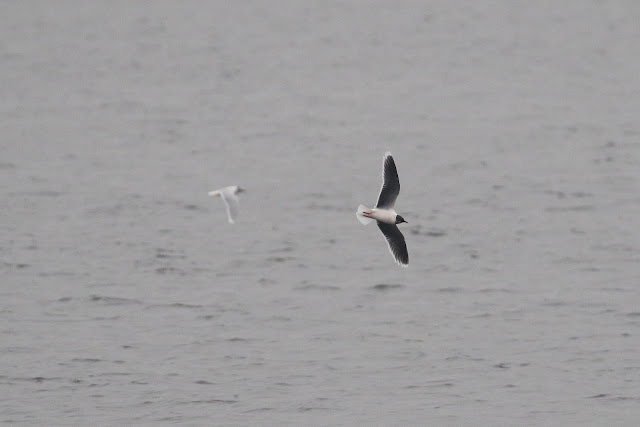 Three Sandwich Terns, having missed CF when they flew over his daily haunt of Woodberry Wetlands on the 5th, kindly carried on to find him on Lockwood 10 minutes later.  The first Common Terns of the year were on the 8th with passage birds throughout the month. Among the peak count of 27 seen in gloomy conditions on Lockwood on the 27th were our breeding birds which arrived back noisily five days earlier. Three Arctic Terns went through Lockwood on the 29th with one lingering next day. 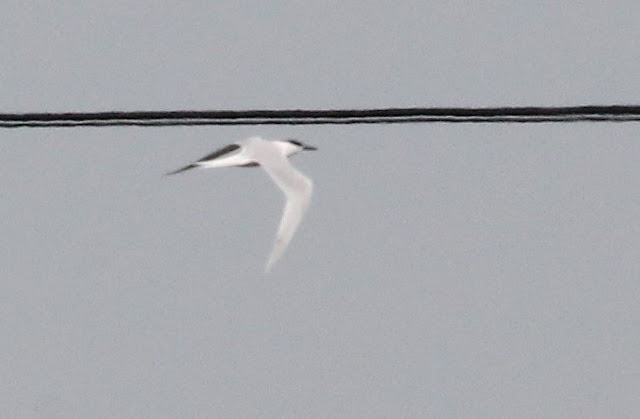 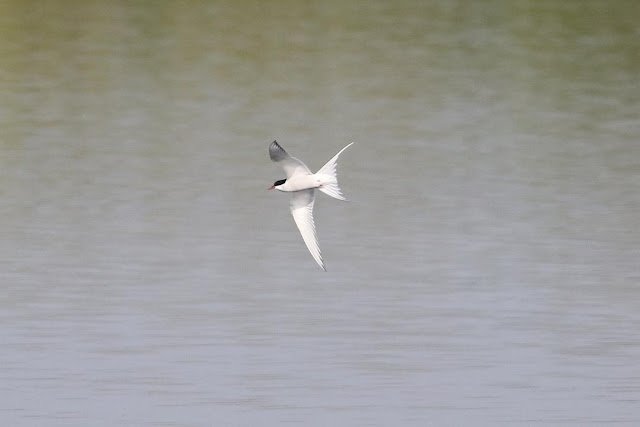 After the welcome return of a calling male Cuckoo for a couple of days in early May last year, DC had a silent bird fly over East Warwick on the 20th. The reservoirs might expect two Short-eared Owls a year so three in a month was unexpected. One flew around the south side on the 3rd with  records also on the 15th and the 23rd. Two days later than last year, the first Swifts were seen on the 25th with a big arrival on the last day of the month. Migrant Jays were clearly passing through the reservoirs mid-month with one party of 11 recorded.

The first Swallows and House Martins were seen on the 2nd, slightly ahead of last year. Singing Willow Warblers continued to be heard in small numbers with five on the 10th the maximum but they had pretty much dried up by the final days of the month. The first Sedge Warblers arrived on the 9th  - five days earlier than last year - with three singing birds while the first Reed Warbler was on the 14th, exactly the same date as 2018. Lesser Whitethroat was a week later with the first not until the 23rd (although they were back earlier on the marsh) and Common Whitethroat was also behind schedule with the first on the 18th compared to the 14th again last year.

Small numbers of Fieldfare remained at the reservoirs until the 17th while migrant Redwing, which had been missing for most of the winter, arrived mid-month with 10 on the 10th and the last bird seen flying north on the 24th. A cracking male Common Redstart, a species which is scarcely annual at the Wetlands, was a good find by PG on the 12th. It stayed around for a couple of days but required persistence and luck to see. 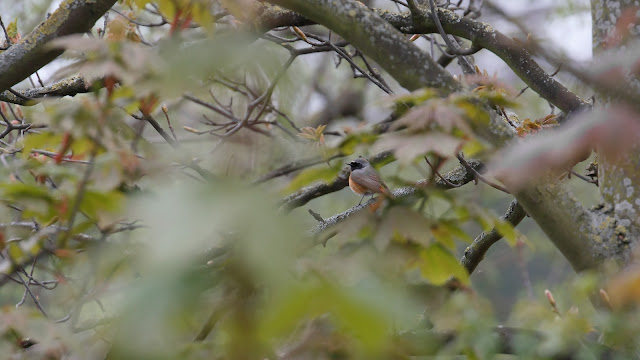 The first Whinchats of the year were two birds on the 24th, four days later than the only one of the Spring last year. Wheatears continued to be seen in small numbers with records on 11 days with a maximum count of five, which all dropped into East Warwick in the afternoon, on the 18th. 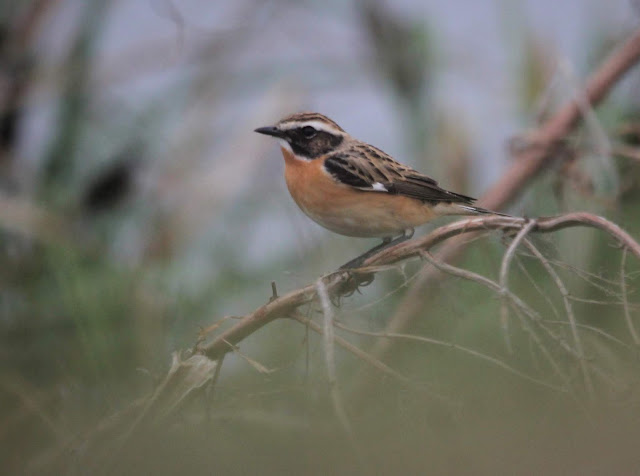 House Sparrows have not featured in this round-up before. For the last few years, they have been restricted to the extreme north and south of the complex but this month for the first time they could be seen collecting nesting material in several new places on the Wetlands including around the Engine House. 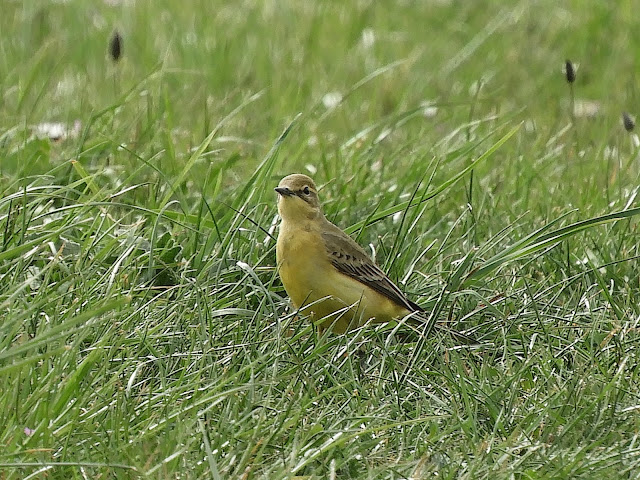 Yellow Wagtails had a very good showing this month. The first two were seen on the 7th, exactly the same initial date as in 2018, with records on nine other days. These included a remarkably high count of  20, presumably brought down low by the gloomy weather and strong NE wind, on the 8th which contained groups of up to seven landing and then flying on. A party of three that fed briefly on the side of East Warwick included the super-smart Blue-headed form, a very unusual visitor to the reservoirs.

Meadow Pipits were also seen throughout the month with 40 counted in one flock on the 2nd. For the second successive year, Brambling turned up on the reservoirs on their return migration. The maximum day count was three but it is certain more birds were involved with the last being seen on the 17th. 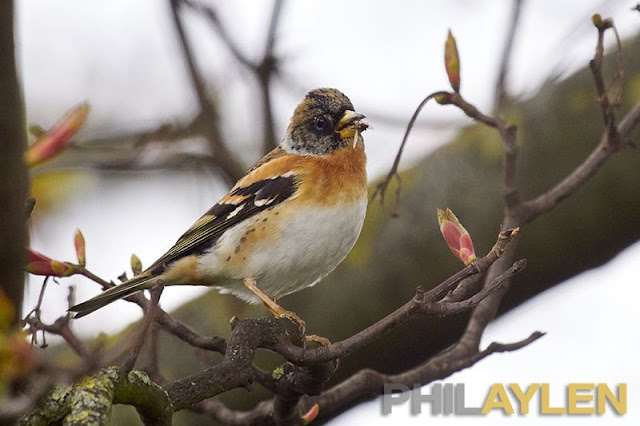 One of at least three male Bramblings which fed at the bottom of No 3, pic @OwlTurbot

More bird photographs and news from the Wetlands and further afield on:
perdixbirding.com
joshrjones.com


Posted by Walthamstow Birders at 15:57 No comments: