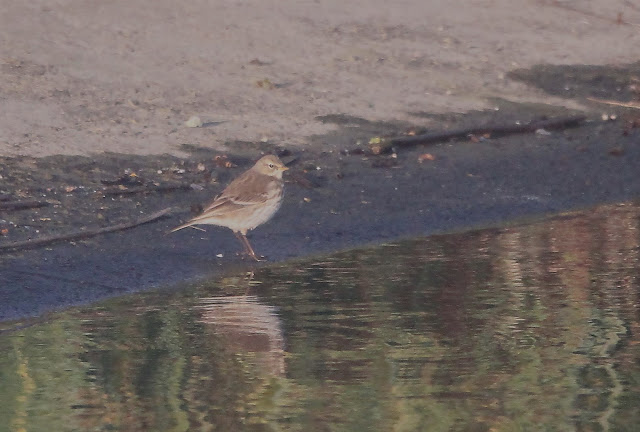 Water Pipit living up to its name on East Warwick pic @Chris_Farthing
November, as usual, produced enough out-of-the-ordinary birds to keep interest high. The month saw the first Water Pipit of the year and second Woodcock as well as a nice mix of winter finches including feeding Lesser Redpoll. Great Egrets continued their exceptional year including an unprecedented flock of five while November also saw a very late House Martin and the third Brent Goose record. The Water Pipit takes the year list to 143 - two behind 2020 but well ahead of 2019. 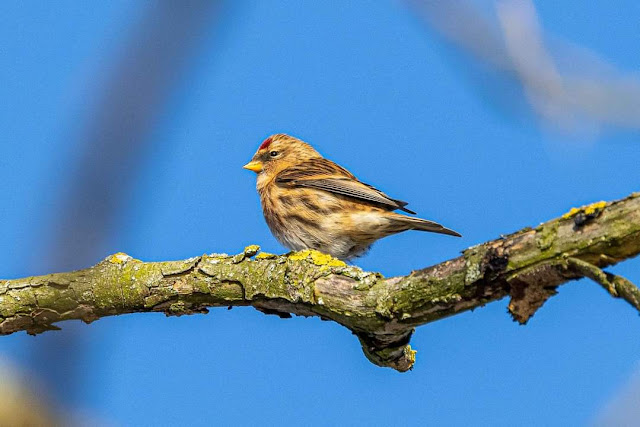 A Brent Goose flew south down Lockwood before resting for an hour on the 26th. The first Shelduck of the autumn returned on the 16th - bang in the middle of returning dates from the previous two years. A Mallard with 12 young on the 24th was either a very late or very early breeder.  A single Wigeon was seen on the 4th with nine on the 15th, seven on the 23rd, two on the 25th and another single on the 30th. The post-breeding Shoveler flock had dispersed by mid-month with just one left by the 19th. 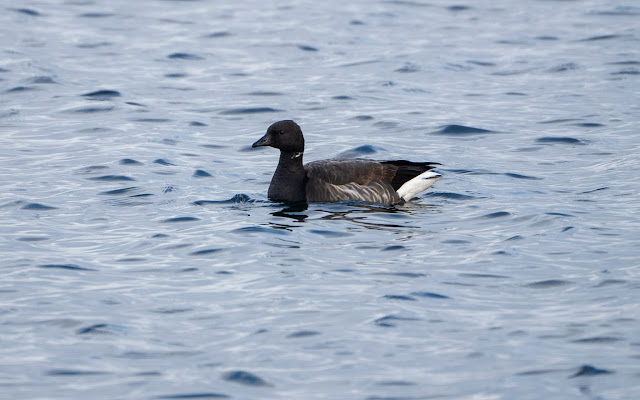 This Brent Goose made a brief stop on Lockwood on its way south @ AMP
Three Goldeneye including two smart drakes were seen throughout the month largely on Lockwood with others occasionally across the complex. Goosander were early arriving back with the first on the 7th, ten days earlier than last year. They were also more regular with up to four surprisingly tame birds seen, most often at the north end of High Maynard until disturbance gets too great. 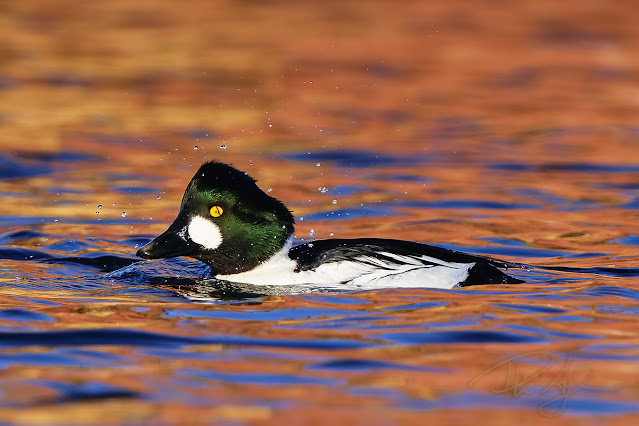 Good numbers of Lapwing were seen with 45 on the 4th - a good day for movement - including a flock of 29,  another 20 on the 15th, three on the 9th and a single on the 23rd & 24th. Just as last November, the month delivered the second Woodcock with CF finding one on the 22nd. Passage Snipe were seen on the reservoir banks on the 4th and 23rd with two on the 22nd.

What might be a faithful wintering Common Sandpiper returned on the 4th - a day later than last year and two days later than in 2019. It stayed throughout the month with two seen from the 5th to the 12th. As last year, Green Sandpipers were also recorded more regularly from the 25th when the water level was not too high in the flood relief channel.

Scanning of the Black-headed Gulls turned up another visitor from Norway hard on the claws of last month's Rock Pipit. It had been rung near Oslo in 2011 when it was already a near-adult so is at least 12 years old. Although it is regularly seen in Norway in the summer, this is only the second time it has been recorded abroad with the last sighting in Regent's Park in 2017.

The remarkable year for Great Egrets continued with PL having a flock of five flying north over Lockwood on the 4th - which were embarrassingly missed by several of us on the reservoir at the time - with another on the 8th. A Red Kite was seen on the 21st while the pair of Peregrines had still not managed to persuade one of last year's young to make its own way in the world.

After last year's flurry of Skylark records with twenty seen, there was, just as in 2019, only one record on the 9th. A very late House Martin - well over a month after the last record - fed over the flood relief channel for at least 15 minutes on the 19th. Blackcap are not regular winterers at the reservoirs so the males seen on the 4th and 5th at opposite ends of the site were presumably migrants. 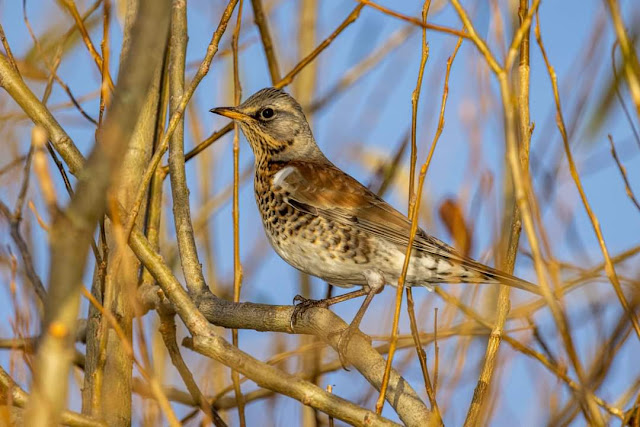 In a good month for thrush migration, this Fieldfare was one of a few to land pic @MLP 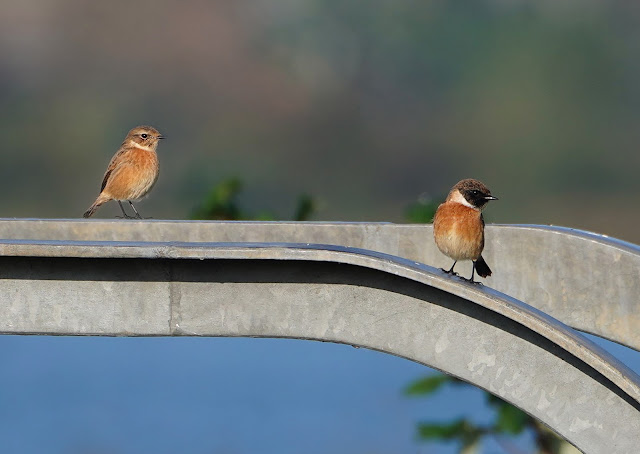 Stonechats were back wintering at the Wetlands pic  @AMP

Thrush migration was stronger and longer than last year when four Redwing was the miserable peak count with 320 on the 4th and 140 next day with 60 still moving west on the 24th. Fieldfare numbers were also higher with 80 on the 4th, twice the highest count last year.  Stonechats were seen pretty much daily with a peak count of six on the 5th. 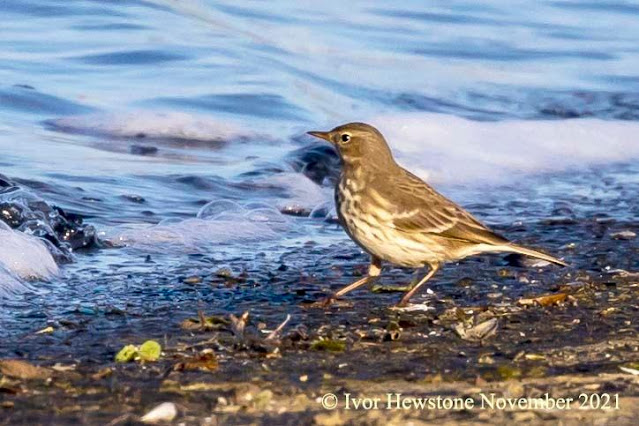 Highlight of the month was this Water Pipit, a less than annual visitor pic @IvorHewstone

Water Pipit is by no means annual at the reservoirs with records in only two of the last seven years so the bird found by CF on East Warwick on the 16th is easily the scarcest species seen this month.It seems to have been a good month for winter finches across the region and, for once, the Wetlands did not miss out. Brambling were seen across the month with singles on the 4th, 15th & 25th, with two on the 10th and four on 14th. 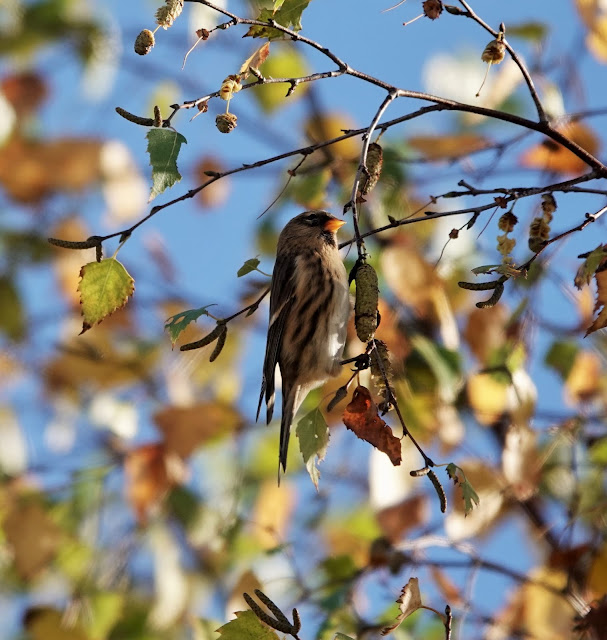 Lesser Redpoll are usually only seen flying over so the four found the feeding near the Engine House on the 4th by LB were in great demand. The single seen in flight by CF the previous day was presumably from the same flock which was also feeding in the same small silver birch on the 5th with two still in the area until the 8th at least. In recent times, Siskin records have also largely been limited to flight records as was the case with the single bird on the 7th. But CF found a flock of 10 feeding in alders next day although, unlike the Redpoll, they unfortunately did not linger.

Posted by Walthamstow Birders at 18:41 No comments: