Jan & Feb on Walthamstow Marshes SSSI and the WaterWorks NR

On the 2nd of January three Lesser Redpoll were roaming the waterworks.

A Firecrest was seen near the raptor view point bench of the marshes on the 7th of January.

A Red Kite made its way over the waterworks on Jan the 8th.

On the 11th of Feb a Nuthatch was seen and heard from the bridge near the horseshoe thicket of the marshes.

A Siskin went north over the marshes on the 25th of Feb.

A Woodcock was flushed from the horseshoe thicket of the marshes - also on the 25th of Feb.

Other sightings of note were:

Posted by Walthamstow Birders at 20:06 No comments: 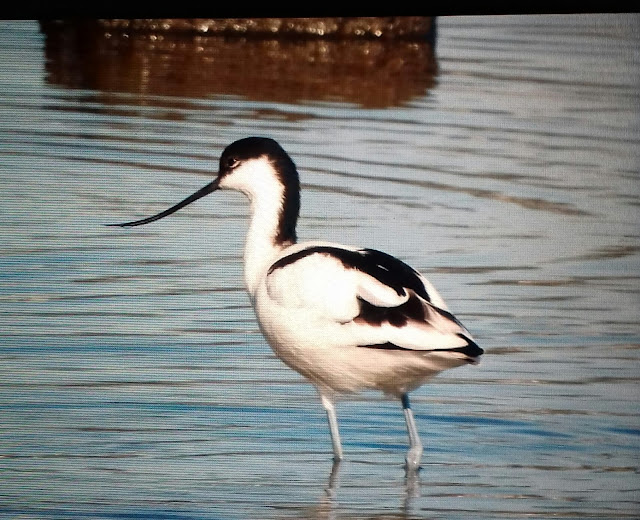 The generally mild weather helps explain why the winter was pretty dull at the Wetlands. No new birds were added to the 2018 year list in December which remained on 143, two more than the previous year. The only highlights of the month were the return of the drake Scaup to No 4 for its fifth winter and the discovery of a Reed Warbler, only the second record for London in December.

January was even duller but February did see some early returning waders with both Black-tailed Godwit and Avocet. The 76 species seen so far in 2019 on the reservoirs is well down on the exceptional 90 already seen by the same time last year. But the Little Bunting saw more far extensive coverage early in 2018 while five more species have been seen this year within a couple of hundred yards of the reservoirs' boundary without yet making it on the annual list.

Shelduck numbers began to build with 11 in December and 14 at end of February. PL counted 53 Gadwall and 74 Teal in January while up to 50 Shoveler could be seen with numbers falling fast from mid-February. The cold snap in December displaced six Wigeon onto Lockwood with two remaining until the 16th. 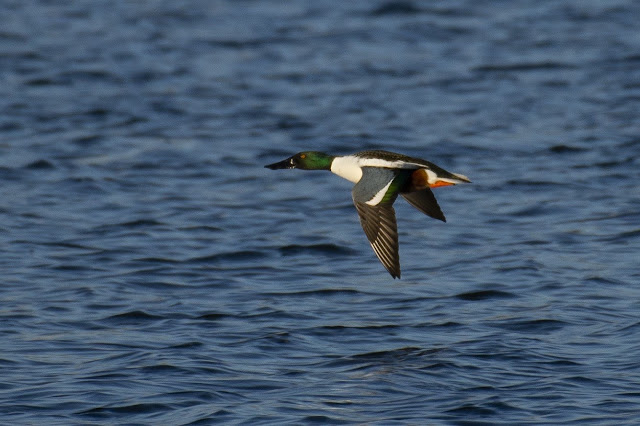 Up to 50 Shoveler spent the winter, largely, on East Warwick pic @sjnewton

Just three days later than last year, the drake Scaup returned to its favourite corner of No 4 on December 6th for its fifth winter. Unusually, it went missing for four weeks from the middle of January - perhaps to KGV reservoirs where a drake turned up around the same time - before coming back on February 9th and staying throughout the month. It was much more active than in the past and was often found feeding in the south-east of the reservoir. 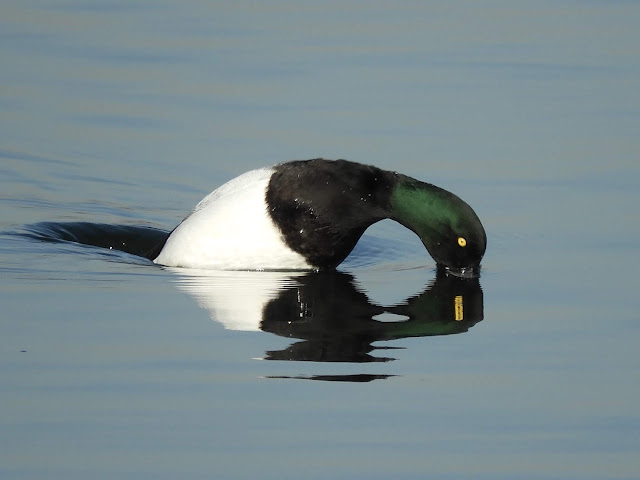 Up to twelve Goldeneye have been scattered across the reservoirs this winter with at least seven birds remaining until the end of February. It has been slightly easier to catch up with Goosander this year with a relatively tame pair regularly on Lockwood in the morning and another pair joining them occasionally. 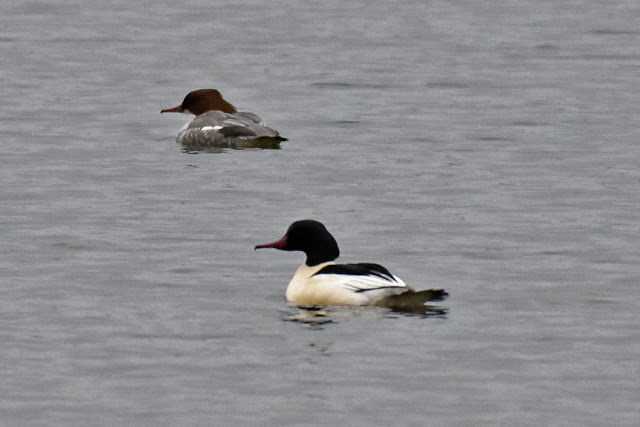 Goosander on Lockwood were less skittish than usual pic @sjnewton

A Red-legged Partridge seen on the side of Lockwood on February 28th was the first on the reservoirs since 2017. The first young Great Crested Grebe of the year was seen on January 20 on No 3. Grey Herons, too, wasted no time in breeding with four nests having young by the end of February. No large birds of prey were seen but the pair of Peregrines regularly surveyed the Wetlands from the favourite pylons. 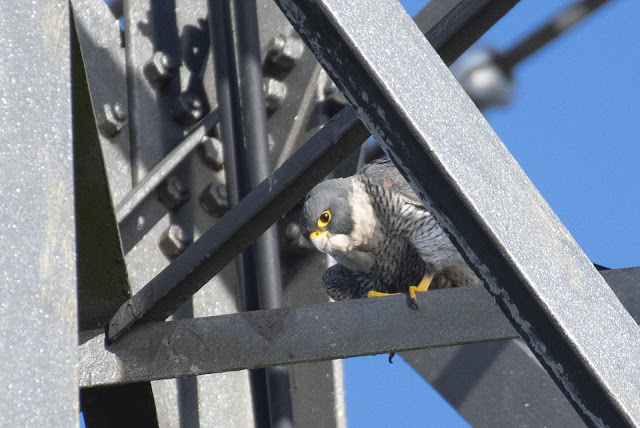 An Avocet found by RE on February 24th means the wader has now turned up for three successive years after a three year period with no records at all. It was a surprisingly tame individual which remained most of the morning on High Maynard, enabling LC finally to add it to his patch list after 55 years of birding at the reservoirs. 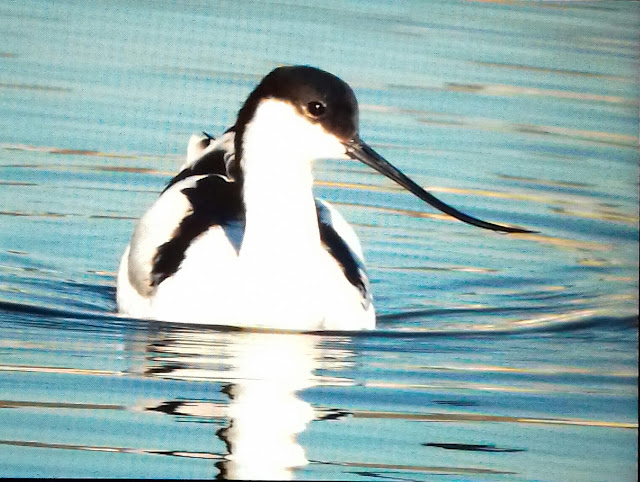 The Black-tailed Godwit found on TG's birdwalk on East Warwick island on February 14th, which remained until next day, was also tame but this was likely because of injury either from flying into a wire or a Peregrine attack. A sharp frost on January 29th saw a high count of six Common Snipe on the banks of the reservoirs, presumably displaced from Walthamstow Marsh. 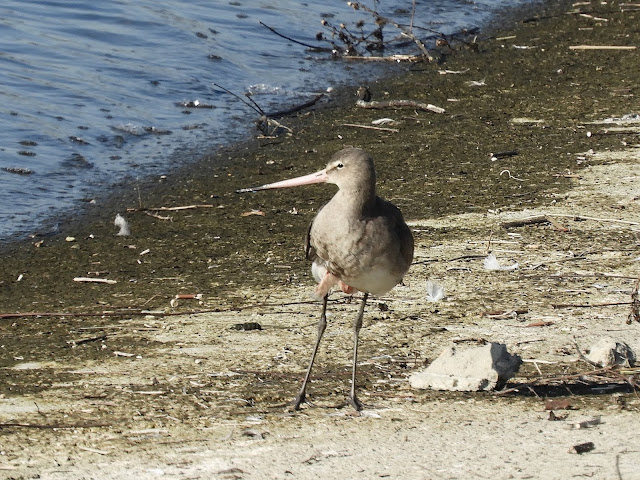 For the first time for several years, no Common Sandpipers have wintered on the reservoirs. But Green Sandpipers were seen occasionally, usually in the overflow channel, with a maximum count of five on January 2nd. The temporary absence of some of the reservoirs' gull enthusiasts helps explain the paucity of records this winter. But even without their expertise, Yellow-legged Gulls were found on the filter beds on January 11th with a 3CY bird on Lockwood on February 14th and February 21st.

Skylarks were seen on January 23rd with two on February 24th. Meadow Pipits continue to be scarce with just one or two occasionally around Lockwood. Stonechat numbers were also low with a maximum of two seen.  Fieldfare were by far the commonest of the winter thrushes with 20 in December and up to 50 by the end of February in contrast with just the odd individual Redwing.

Small numbers of Chiffchaff winter at the reservoirs and the warm weather at the end of February saw at least four in song. The last Reed Warblers, however, should leave in October at the latest so the bird found by JW on December 10th & 11th on No 3 was an exceptional record. It seems to be only the second Reed Warbler seen in London in December with the first in nearby Leyton in 2013. 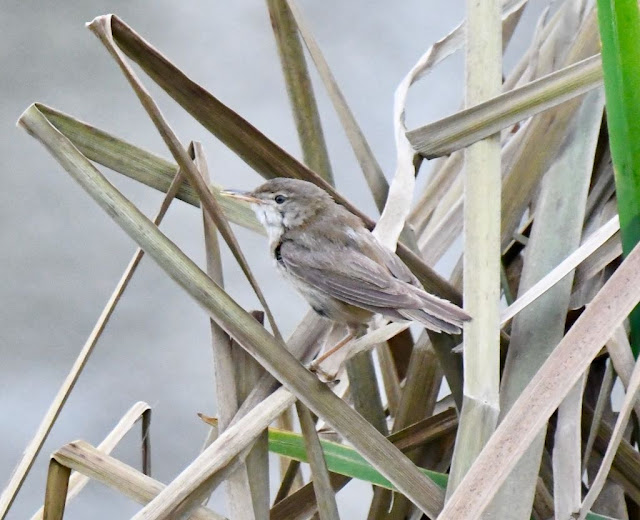 Late winter and early spring are the best time to see scarcer corvids at the reservoirs so the first Jackdaw on February 14 was again right on schedule and started a mini-run of records in the month. It is a mystery why such a common bird nearby turns up so infrequently at the Wetlands. Compared to last winter when c80 Linnets and a dozen Reed Buntings could be seen around the flower meadow, numbers of both species seemed far lower this year. The largest flock of Linnets was 35 while Reed Buntings were largely restricted to the No 1 reed bed with a maximum of six seen in a day.

Posted by Walthamstow Birders at 17:53 No comments: