In 2013 the rangers of Hackney Parks and Green Spaces pollarded a tree in which had a Little Owl occupying one of its hollow branches. The Little Owl could be regularly viewed from the WaterWorks NR Pitch & Putt.

A year 2 child’s dad (in the class I was teaching at the time) worked for HPGS and after I had mentioned what had happened, HPGS had me design a nest box which they put it up in the pollarded tree.

The nest box was mostly occupied by squirrels and stock doves for 6 years. But yesterday, Eugene Dillon-Hooper tweeted (with photos https://tinyurl.com/rzmx9fj ) that he had spotted a Little Owl on the platform of the nest box. Eugene later confirmed that Mike Messenger spotted the Little Owl earlier on New Years Day. 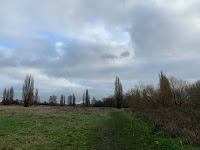 I paid a visit to the WaterWorks NR today and after a bit of searching the nest box tree (whilst 3 Treecreepers creeped, sang and called around the trees near me), a Little Owl was found in the pollarded tree to the left of the nest box tree. It called several times. The HPGS nest box was placed facing south. However, the original branch and its hole in which a Little Owl used to look out of, faced north. And today, a Little Owl was in a natural tree hollow, facing north. Maybe it doesn’t like the box or prefers facing north or is keeping an eye on the banks of the old river lee for small mammals?

On the same Feb 2013 day, before watching my last WaterWorks NR Little Owl, I also had a Bittern in the WaterWorks NR: https://archive.is/cn2m9

PS. A Little Owl tree had also been pollarded on the Walthamstow Marshes SSSI paddocks a few years prior to the WaterWorks NR pollarding. Lets hope at a third time of asking, a Little Owl can get a few good years of solid me time in its desired tree (however, there are a lot more parakeets around the waterworks these days and a 'doggy beach swimming club' very near the Little Owl tree: https://tinyurl.com/yx78u74l).

Graham
Posted by Walthamstow Birders at 14:14 No comments: