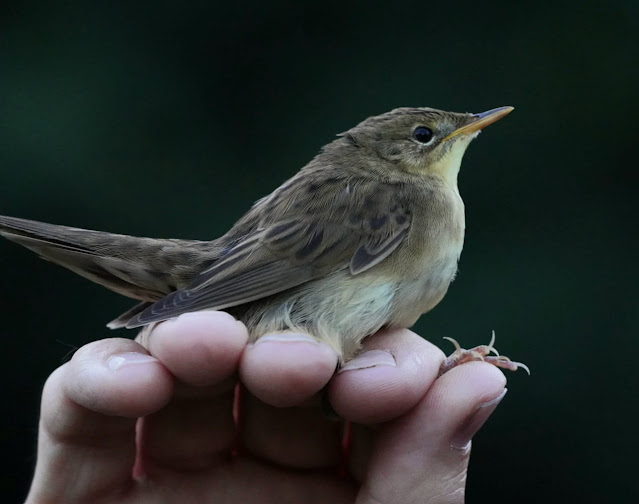 After a dismal first half of the month, August sprang to life with a series of good birds including the first Grasshopper Warbler to be seen at the Wetlands. August also brought the fourth ever record of Cattle Egret along with the first Marsh Harrier and Curlew of 2021. Black Tern and Spotted Flycatchers closed the final gaps of the species seen every year over the last decade. 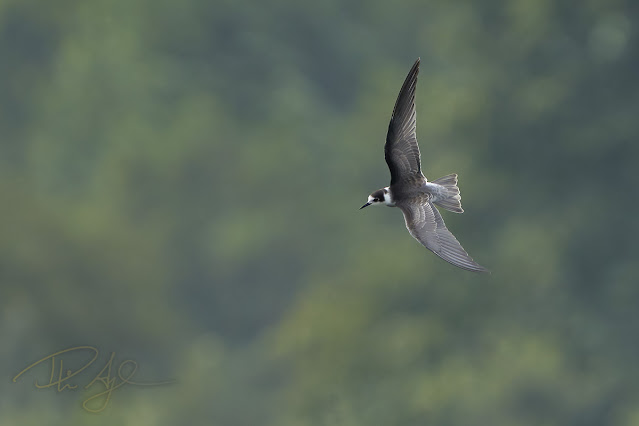 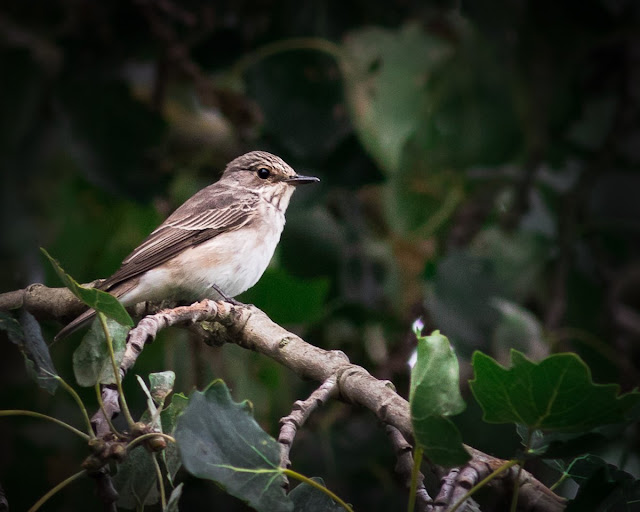 The second half of the month, also brought a steady trickle of migrants including Whinchat and Yellow Wagtails along with scarcer waders including a mass arrival of Greenshank. The six additions take the year list so far to 138, eight more than in 2020 and 12 more than in 2019. 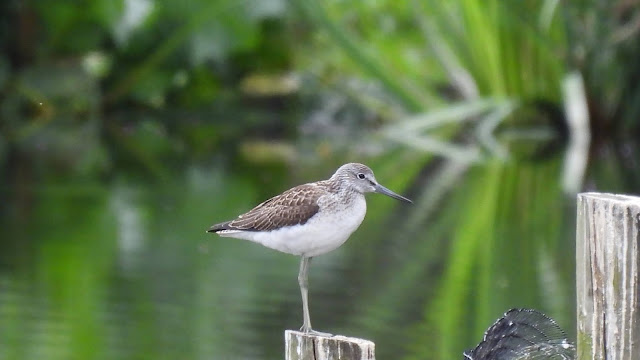 In a great month for Greenshank, this roosting bird on No 3 showed best pic @rom_london

A touch of northerly on the 23rd saw early flocks of nine Wigeon and 35 Teal arrive at the reservoirs with five more Wigeon on the 27th and three on the 30th. The first Wigeon were not seen until mid-September last year. Shoveler numbers also built up quicker with around 50 by the month's end although they were more scattered across the site than recent autumns. An all-site count mid-month found 2564 Tufted Ducks had gathered at the Wetlands for their post-breeding moult which is a higher number than recent years. As the largely male flock was loafing, females were still raising young with perhaps as many as 40 pairs breeding this summer. 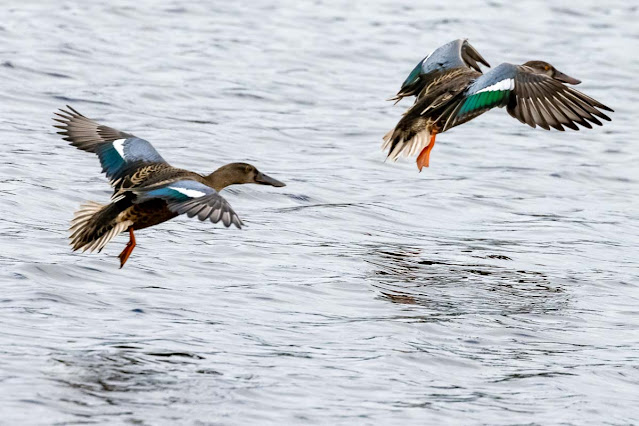 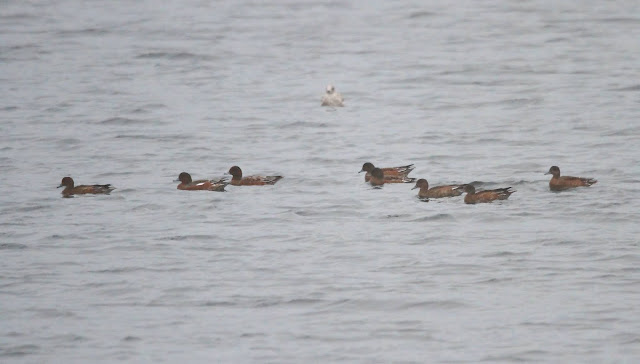 A drop in the water level saw a count of 55 Little Egrets feeding around the edges of the northern reservoirs on the 18th. The 29th was a red-letter day for rarer herons when first three Great Egrets went high north followed later by a flock of smaller herons which included at least one Cattle Egret. Examination of the photographs taken by CF at Woodberry of the same flock showed not just the adult  but also a black-billed juvenile. It is only the fourth time Cattle Egret has been recorded at the Wetlands but it is a sign of their UK expansion that three of these occurrences have been in the last two years. Another Great Egret - again seen first at Woodberry and again becoming commoner - landed briefly on Lockwood before continuing north. 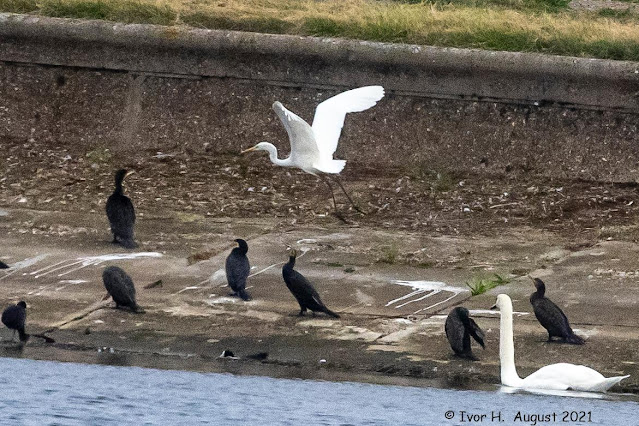 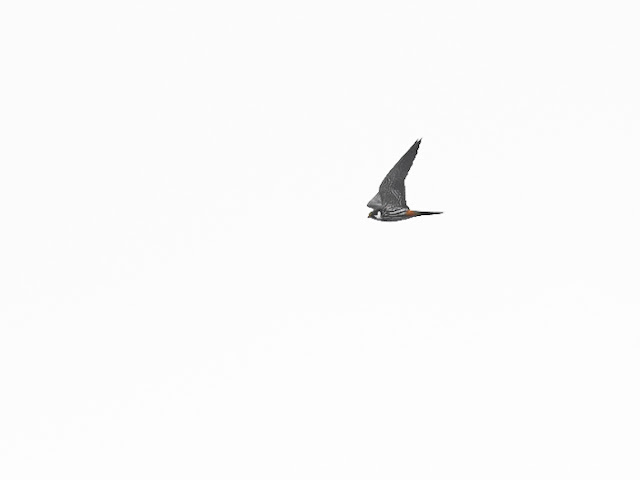 The stand-out bird of prey was a female-type Marsh Harrier on the 26th which was seen by Earl and RT while they were fly-fishing. The only Red Kite was on the 23rd and the sole record of Buzzard - which have been perplexingly scarce this year - was on the 30th. Hobby flashed through on at least eight days while Sparrowhawk, Kestrel and particularly Peregrine were seen more regularly. 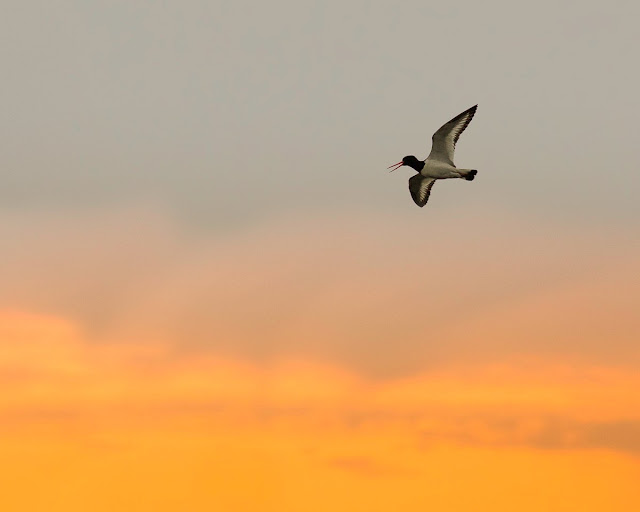 Twelve species of waders - one more than last year - were recorded in August. The only Oystercatcher was a very noisy individual on the 21st. Single Lapwing were seen on the 3rd & 23rd while the third and fourth Ringed Plovers of the year were on Lockwood on the 19th & 31st. Little Ringed Plover had been scarce over the summer but a juvenile took up residence on Lockwood on the 24th staying until the last day of the month when it was joined by two more. 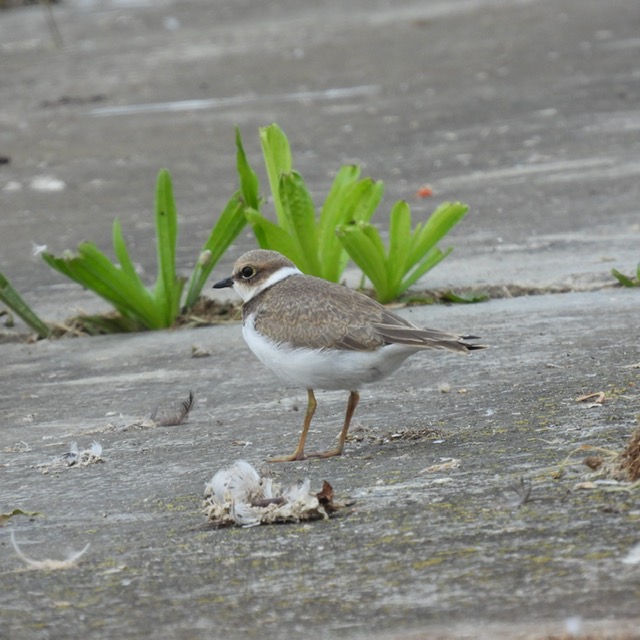 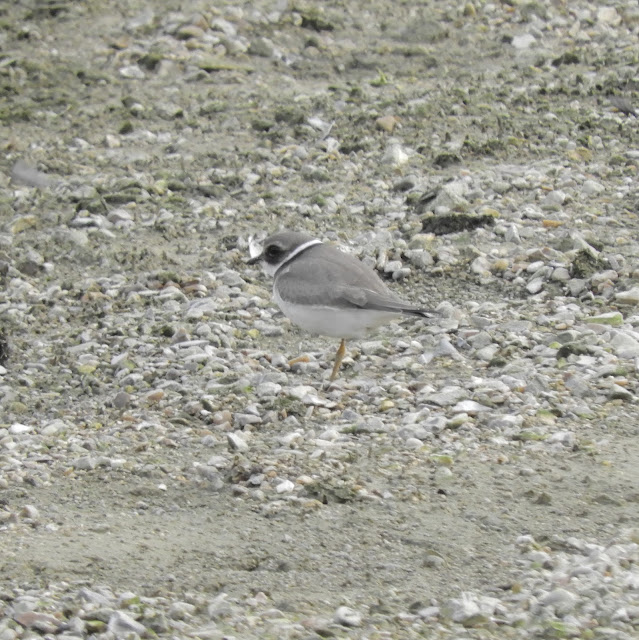 Two Curlew rested on Lockwood on the 29th - one of three new species for the year recorded that day - before heading off north. Four Black-tailed Godwit went high in the opposite direction on the 28th. After three single Dunlin in July, the only record in August was on the last day of the month. The first Snipe of the autumn was seen on the 19th, two days later than last year. 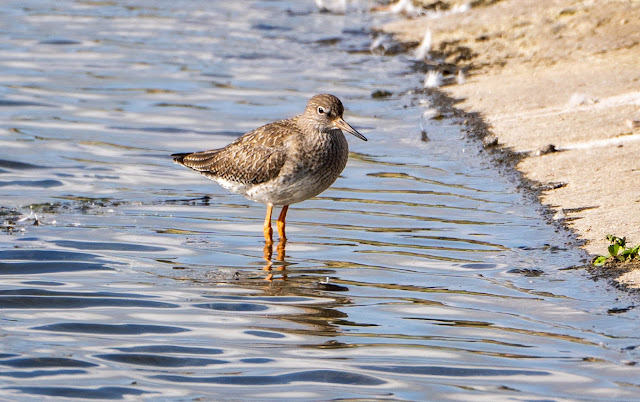 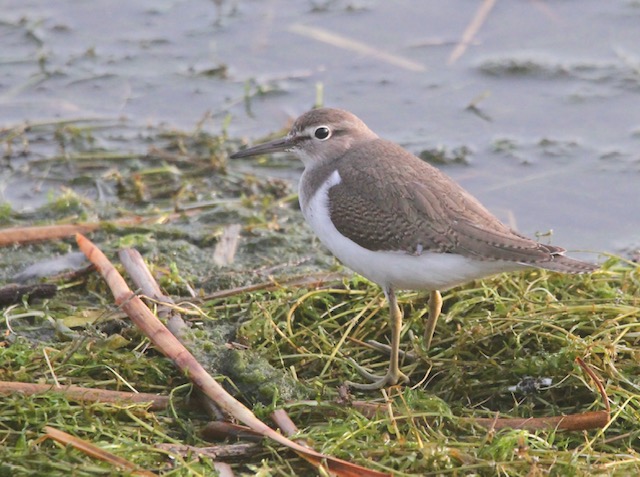 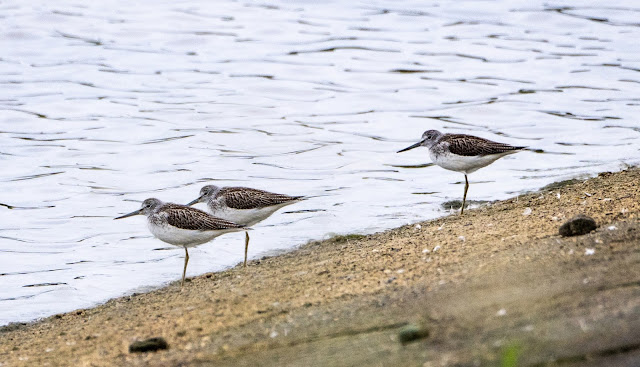 The wader event of the month was an influx of Greenshank with perhaps as many as eight including a probable six on one day. The first was found late on 18th by QG with three next day which stayed around Lockwood until the 22nd. While they were still in the overflow channel on the 21st, two more were seen heading off east high with another confiding bird roosting on No 3 reservoir in the afternoon. A single bird was briefly on Lockwood on the 23rd with the final record one heading west on the 30th. 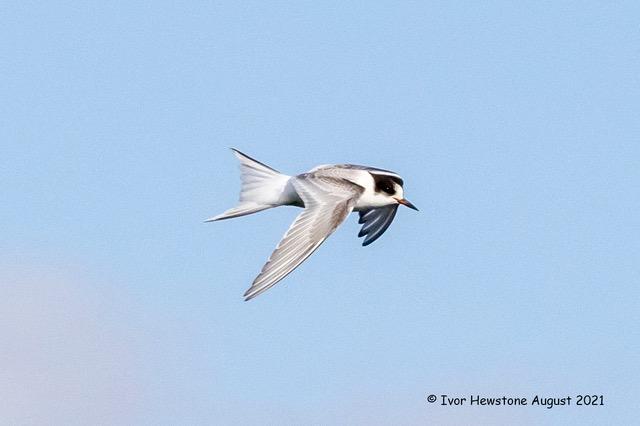 A juvenile Arctic Tern showing off its ID features on Low Maynard pic @IvorHewstone
Another young Yellow-legged Gull was picked up by RE on the 19th. Common Terns, which stayed until the end of the month last year, left en masse much earlier with the 25-plus seen on the 13th dwindling to three on the 15th with none two days later. Their departure made it easier to pick out a juvenile Arctic Tern on the 24th feeding over the Maynards. Most Arctics seen at the reservoirs are adults in Spring. 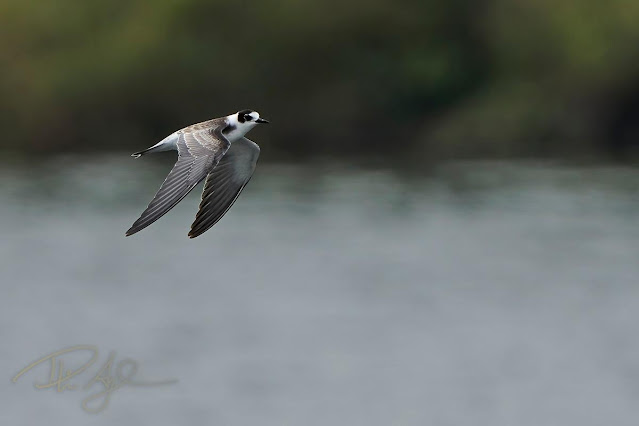 CF picked up a juvenile Black Tern on West Warwick on the 16th which stayed around all day. The species has been seen every year over the last decade at the reservoirs but seems, for some reason, much scarcer and is always a crowd pleaser. One that got away was a probable small skua - either Arctic or Long-tailed - seen by PL going south early on the 22nd in good conditions for inland passage.

The exceptional year for Cuckoos continued with juveniles seen on the 17th and 25th. Large numbers of Swifts - with lingering local birds presumably boosted by migrants - could be seen right through August with a flock of 150 feeding over Banbury on the 31st. Both House and Sand Martins also stayed throughout August but Swallows were again scarce with just two on the 16th and four on the 24th. For the first time in several years, Kingfisher successfully bred on the reservoirs on the small No 5 island with the fledged young seen enjoying No 2 & 3 reservoirs. 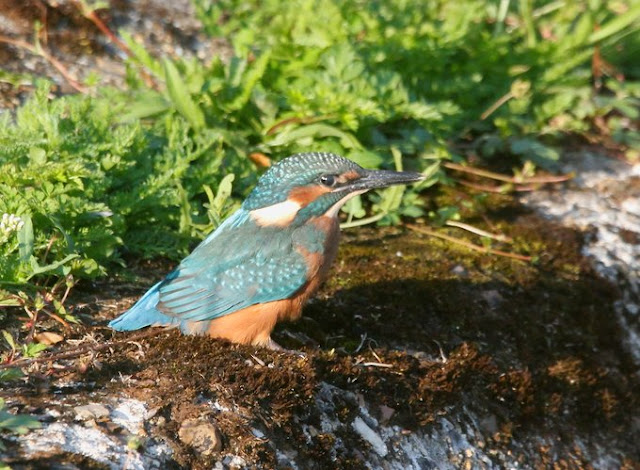 A recently fledged Kingfisher proved breeding at the Wetlands pic@Chris_Farthing

Small numbers of Willow Warblers were seen and heard from mid-month with three being caught during the constant effort ringing sessions around the No 1 reed-bed on the 15th. The results of the regular  sessions continue to amaze with an astonishing 228 Reed Warblers rung by the end of the month. Although many will be migrants passing through, it is clear that the Wetlands has a far higher breeding population than anyone ever imagined. 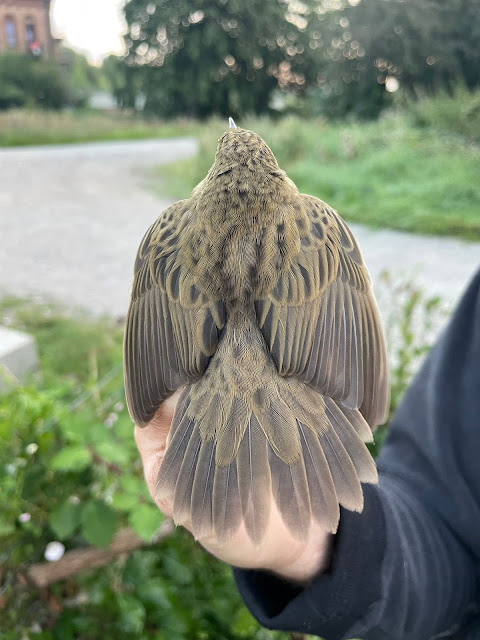 There was always the hope that something unusual would be caught and that was the case on the 29th when the first bird in the net before it had even been properly opened was a Grasshopper Warbler. While birds have been heard reeling from the reservoirs before - with the last record in May 2018 - this seems to be the first ever to be seen on the site. Sedge (10) and Garden Warblers (3) along with Lesser Whitethroats (3) have also been caught over the summer with one or two of all three species seen regularly in August. 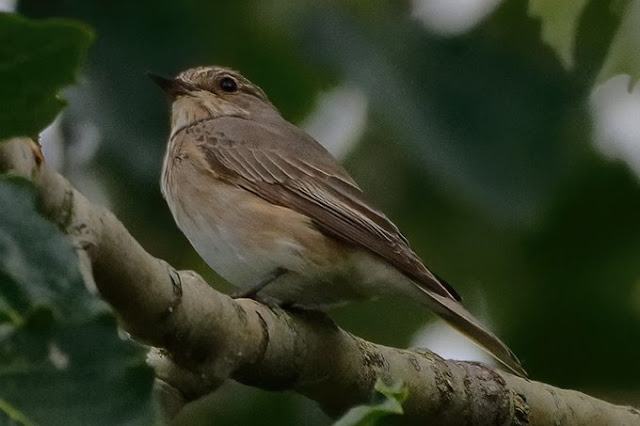 It was a slightly disappointing month for Spotted Flycatcher with the first not seen until the 20th when LB and SN found different birds. The one in the copse by the Maynard entrance stayed next day but the only other record was on the 29th. But so far there has been no repeat of the Pied Flycatchers of the last two Augusts although one did spend a couple of days over the fence on Tottenham Marsh. Whinchat, another scarce autumn migrant, had a slightly better showing with records on the 17th, 19th and 27th with two on the 22nd. 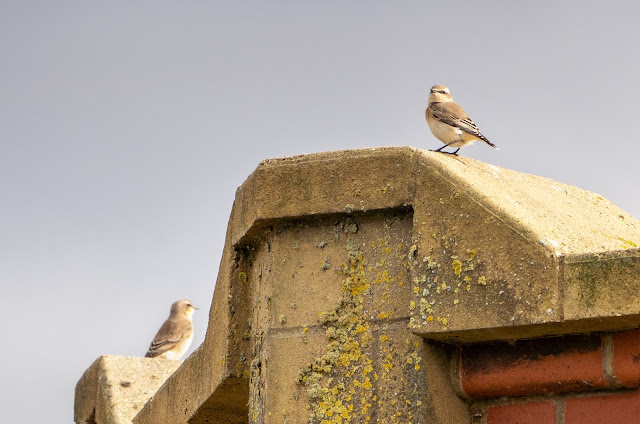 Wheatears were scarce with few multiple arrivals pic@AMP
Wheatears turned up in modest numbers with the first on the 3rd followed by two on the 12th and records then most days until the end of the month.The peak count was three from the 17th to 19th and on the 26th which is about average in recent years. Three Yellow Wagtails were also recorded on the 25th and 30th with single birds - often fly-overs - on at least four other days. The grass sadly was finally cut around Lockwood but enough was left to continue to attract Linnets with up to 20 seen in the first few days. 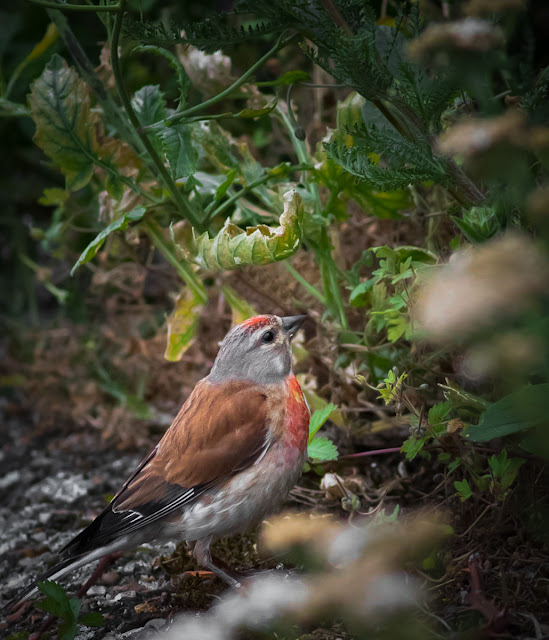 Linnets enjoyed the longer vegetation around Lockwood and became less wary pic @rudraksh9
September often vies with April as the best month of the year with nine new species added in 2020 so hopes are high. Red-crested Pochard is still the most obvious miss from the year list but it is also getting late for Osprey which has been seen in each of the last five years.
DB @porthkillier
Posted by Walthamstow Birders at 16:21 1 comment: