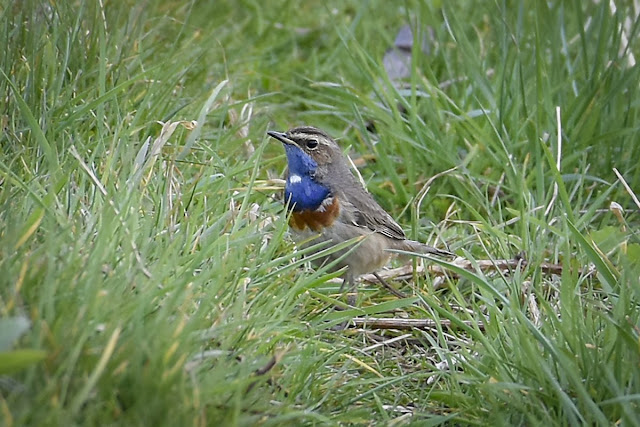 The first Bluethroat for over 80 years pic © Magnus Andersson @magnusphotog

March is always considered a good month for birding on the reservoirs but this year it was truly spectacular. The highlight was a stunning male White-Spotted Bluethroat, the first at Walthamstow since 1936. With the surprise re-finding of the male Serin and the over-wintering Little Bunting, the reservoirs hosted three London rarities during March. Add in the waders and ducks displaced by the two freezing spells and the reservoirs enjoyed one of its best ever months, perhaps the best, and could rightly claim to be - for one month at least - the capital's prime birding spot.

As well as the Bluethroat, 16 more species were added to the reservoirs' year list - Woodcock, Pintail, Grey Plover, Dunlin, Knot, Ringed Plover, Sand Martin, Rook, Little Ringed Plover, Wheatear, Bar-tailed Godwit, Barn Owl, Blackcap and Willow Warbler along with Skylark and Siskin already recorded elsewhere on the patch in 2018.  It takes to 107 the species seen this year - two more that at the same time in 2017 when numbers were boosted by the draining of No 4 & 5.

Shelduck numbers increased slowly throughout the month with 17 counted on the 26th. The Beast from the East saw an influx of Shoveler with 47 on the 2nd and at least 15 remaining until the end of the month. It also brought in a flock of 14 Wigeon onto No 1 on the 1st with three more scattered around the reservoirs the same day and another drake on the 7th. On the 1st as well, DW found a lovely drake Pintail - by no means an annual visitor - on No 1. 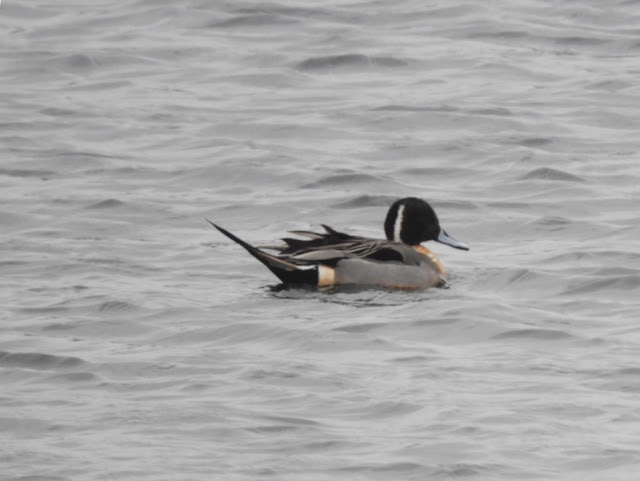 The drake Scaup, after a few days when its presence on No 4 was erratic, finally seems to have departed on the 26th - 15 days later than last year and six weeks later than in in 2016. With luck, it should return for its fifth winter in early December.  Goldeneye numbers remained high with 12 scattered around the reservoirs as late as the 27th while up to three Goosander could occasionally be seen on, or flying over, Lockwood until the 30th at least. 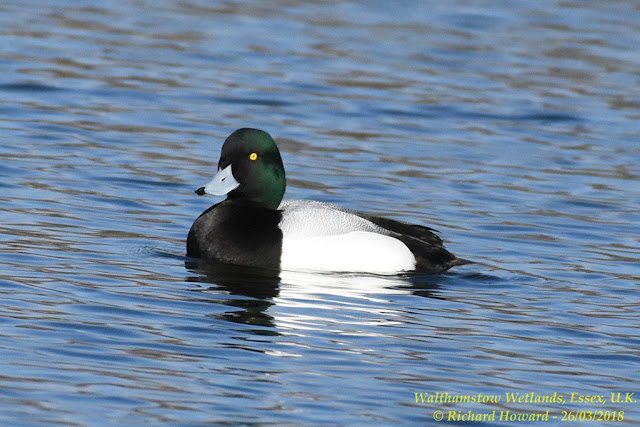 The local Peregrines and Sparrowhawks continued to show well throughout the month with three Sparrowhawks soaring together on the 21st. As expected, March saw larger birds of prey passing over with Red Kites on the 16th, 23rd and 27th and Buzzards on the 5th and 26th with two on the 16th. 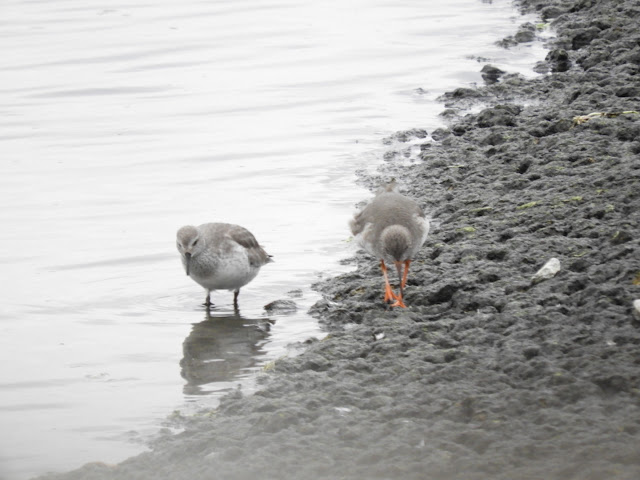 The two freezing spells, added to the usual passage, saw 13 species of waders recorded on the reservoirs which is not far off the annual total in a poor year. No less than seven species - which did not include Common Sandpiper - were seen on the 1st, the first day of the intense cold snap. They included Oystercatcher with singles also on 23rd and 28th and two on 22nd. Lapwing numbers, although nowhere near as high as the 1000+ seen at Wanstead, were good for the reservoirs with  seven on the 4th, three on the 5th, six on the 6th, 35 on the 7th including flocks of 17 and 14, and singles on the 13th and 16th.

The first day of the month saw both Grey Plover, seen by DW flying low north, and a Knot found by PW on East Warwick. What may have been a different Knot, discovered by TR, was on Lockwood for two days from the 5th.  The only Little Ringed Plover was at the north end of East Warwick on the 15th - a week earlier than the first migrant in 2017 - while CF had a Ringed Plover on the same reservoir on the 9th in heavy rain. TR earned his reward for braving terrible conditions on the 17th with a Bar-tailed Godwit, not recorded since 2015, also on East Warwick, The first Dunlin of the year were two on the 1st but there may have been as many as nine individual birds recorded around the reservoirs during the month. 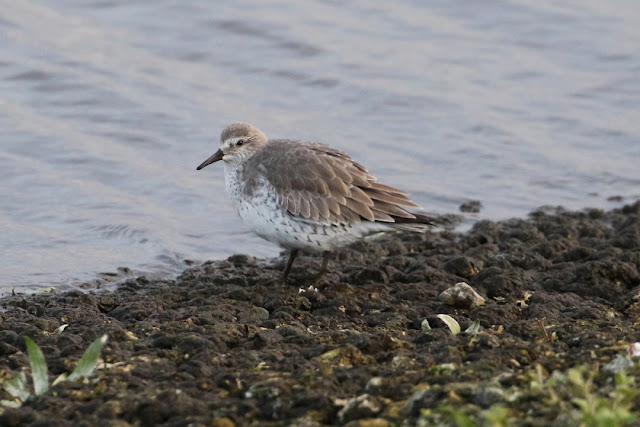 Freezing temperatures often see Woodcock turn up on the reservoirs but three on the 1st confirmed how tough the conditions were. Five Snipe were also seen on the same day with seven counted on the 21st. Single Redshank were seen on the 4th & 5th and 22nd. Green Sandpiper, whose numbers have been low because of the high water level in the overflow channel, built up from the middle of the month with four recorded on the 15th &16th and three on the 30th. Common Sandpipers clearly wintered but largely out of sight with a single on the 7th and two on the 14th.

A IY Yellow-legged Gull was found on the 20th but otherwise gulls were the one family from which expected records were disappointing. MM had to drop his usual refrain of being the reservoirs' unluckiest birder when he flushed a Barn Owl from the side of Lockwood on the 19th. It is the first record from the reservoirs since the same month in 2015 when one spent several days on Tottenham Marsh.There was also a report just off the reservoirs of a calling Tawny Owl, a species which has not been seen or heard for years, across the canal from West Warwick on the 24th.

March is a good month for passing corvids with four Rooks seen on the 13th and singles on the 16th and 24th. Jackdaws, too, were seen on several dates including two going north on the 6th and four on the 14th. The first Skylark of the year for the reservoirs flew over on the 7th while, also just off the patch, a Woodlark was seen on Walthamstow Marsh on the 17th. Sand Martins returned pretty much on cue with a single on the 13th and two on the 14th, 15th and 17th before the cold snap and northerly winds put an end of passage until three on the 29th and two on the 30th. 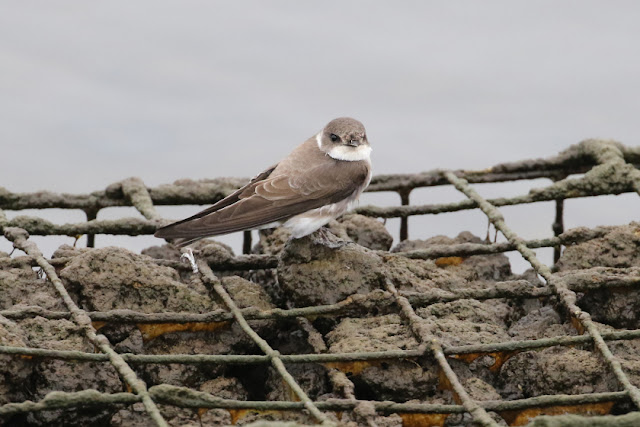 By the end of the month, Chiffchaffs were singing intermittently around the site but the only Blackcap was heard on the 23rd and the sole Willow Warbler was briefly in song on the 31st. Cetti's Warblers seemed to have survived the freezing spells with perhaps eight birds singing by the end of the month. Small numbers of winter thrushes continued to be seen with 20 Redwing on the 22nd and five Fieldfare on the 28th.

A Scandinavian Rock Pipit was on Lockwood on the 14th with either this species or a Water Pipit seen in terrible conditions on No 4 on the 29th. The first Wheatear was found on the 16th - four days later than last year - but, as often seems to be the case, there is a long wait for the next with no other records this month. What seems certain to have been a migrant Stonechat was seen at the bottom of Lockwood on the 6th with wintering birds continuing to be seen occasionally on West Warwick.

It was a Stonechat I expected to see when a small dark bird  flew up to a low bramble on West Warwick on the 23rd. Even the brief view it gave before it dropped down into the reeds revealed it was unmistakably Walthamstow's second ever Bluethroat. Although flighty at first, it settled down in a small area from mid-afternoon to give, with patience, good views but sadly disappeared overnight. It was one of a small number of the White-Spotted form found in the UK this month after being blown off their normal migration course by the strong easterly winds. But it is only the 21st Bluethroat for London since the first was seen just across the railway line on East Warwick in September 1936. Thanks to Thames Water and London Wildlife Trust for allowing and managing special access for birders to West Warwick to see the bird. 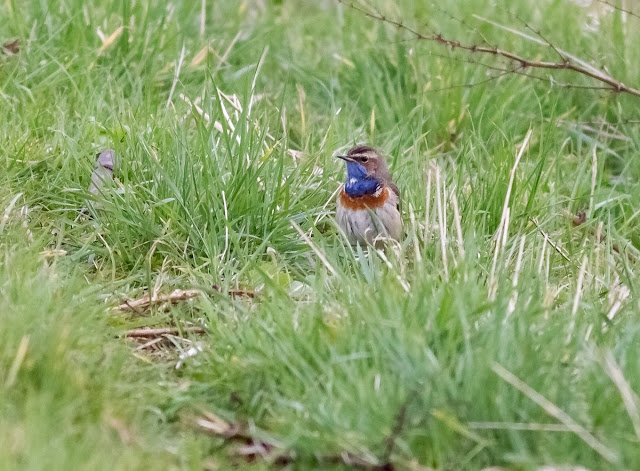 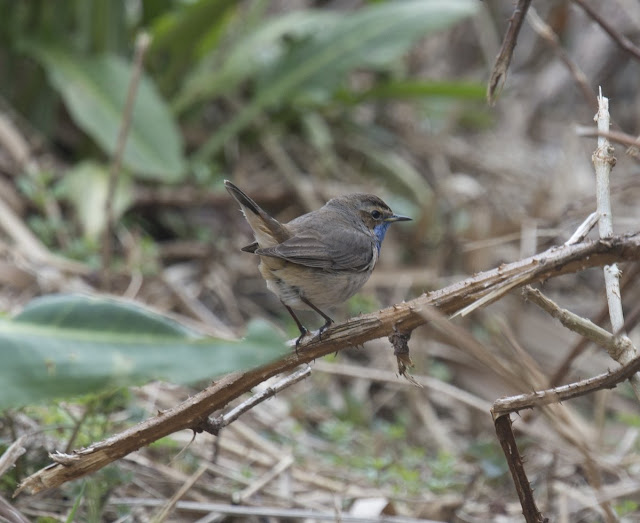 Pics by Dante Shepherd (above) and David Darrell-Lambert (below)

In any ordinary month, the re-discovery of the male Serin by JP on the 6th - more than three weeks and just a few yards since it had first been found - would deservedly have taken top billing. Where it had been is anyone's guess but, with so many eyes looking for the nearby Little Bunting, it seems unlikely it had been overlooked. This time it had the good grace to stay a little longer and was well watched on the 7th and seen briefly next day before disappearing again. 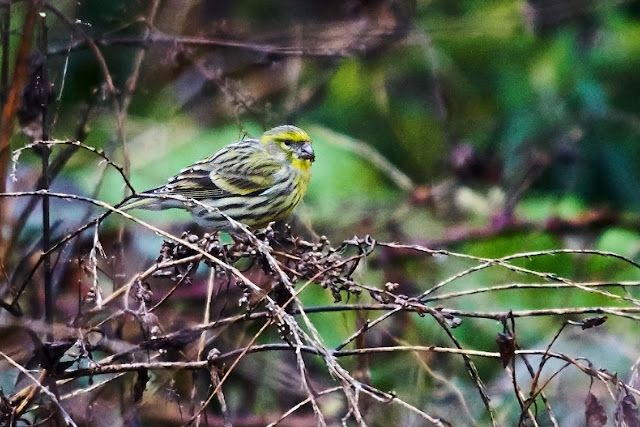 It seems likely that the Serin was attracted by the size of the Linnet flock which reached 80 in the aftermath of the freezing spell and remained 25-strong, itself a remarkable figure for the reservoirs in recent years, at the month's end. The first  Siskins of the year on the reservoirs were two seen by DM on the 27th while SH had a male Brambling on the 31st.

For a brief magical moment on the 7th, the Serin and the Little Bunting were just 40 yards apart and could be seen from the same spot. But unlike Walthamstow's other rarities, the Little Bunting stayed faithful throughout the month and began to show much more regularly around the seed tray. It is estimated that well over 1,000 birders, from as far afield as Liverpool and Limerick this month, have come to enjoy it over its 70-day stay. The Bunting also had a laugh at the expense of local birders who thought it a dull female by becoming brighter plumaged as the month went on and then beginning to sing to prove it was definitely more a Harold than a Hilda. 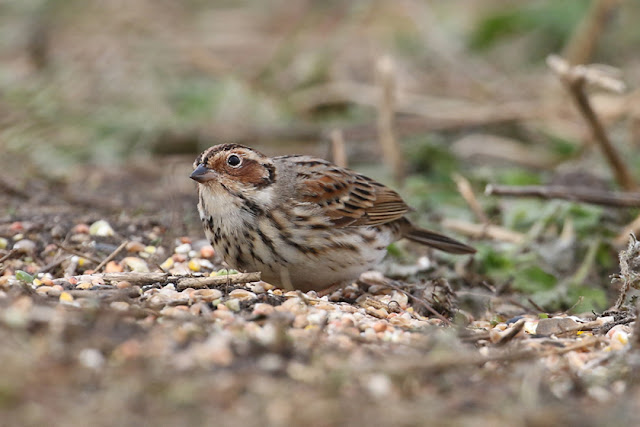