You don't expect much when you visit the reservoirs at the end of February. The winter visitors like the duck have begun to trickle away without being replaced by much. Another fortnight and there is a real sense of expectation. So today's visit was pretty much as anticipated. I did see Green Sandpiper for the first time this year with two briefly at the top end of Lockwood before they returned to the overflow ramp. A flock of c10 Siskins in the alders at the bottom of East Warwick was a reminder that it had been a very good winter for them, but otherwise it was pretty much the same old birds. There was at least one Stonechat on West Warwick and one or perhaps two Common Sandpipers on No 4. Jamie's Barnacle Goose was feeding voraciously on West Warwick, doubtlessly stocking up for its long flight north. 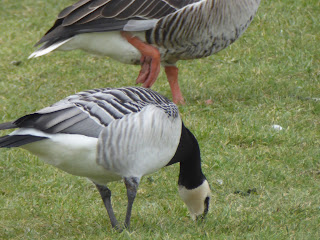 Duck numbers are right down with not a single Shoveler but I did count 46 Teal on High Maynard and probably had another 20 off the Lea and on other reservoirs. I could only find two frisky Goldeneye on Lockwood who also can't wait for Spring. 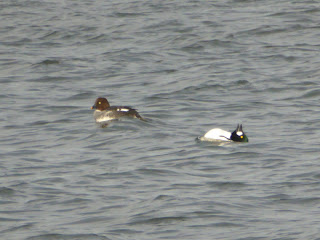 I just about crept up to a par score of 55 species for the visit without a Cetti's or a single bird of prey. But the Green Sands took me up to 70 species for the year which is one more than last year on two fewer visits. It's not bad given it has been a pretty mediocre winter and I seemed to have missed the few good birds which have turned up because I have been away. But with a little work jaunt next weekend to Seattle (and the chance of Surfbird and Varied Thrush) I could time my next visit with the first Sand Martin of the year which was the 14th. .


Posted by Walthamstow Birders at 22:40 No comments:

Stop me if you’ve heard this one before, but I have spent a fair bit of time and effort looking for the Brambling that was found by @callahanbirder on the Reservoirs on January 3rd. Originally in the old Horse paddock by the side of No.5, and well twitched by many, it promptly disappeared after a few days only for @leevalleybirder to re-find it in the Horse paddocks on Leyton marsh on January 26th. 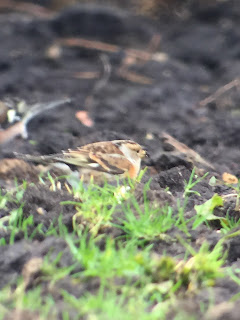 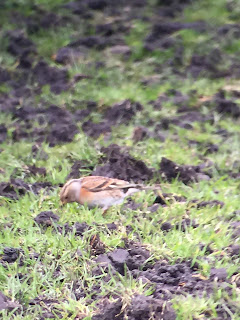 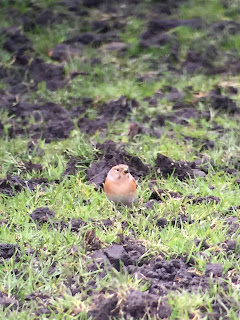 On a bit of a quest I made at least six attempts at relocating it at both sites but to no avail, somehow though, I felt it was still around. Today @stuartfisher16 saw it back in the paddocks near the riding stables off Lea Bridge Rd and got the news out quick. It was a few hours before I could get down there but, as the weather was fairly grim, I was quietly confident that this was going to be 7th time lucky. (It does seem the harder I try the luckier I get). 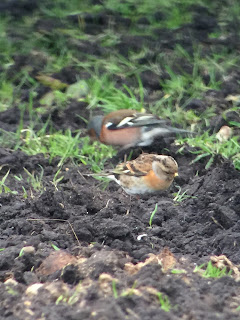 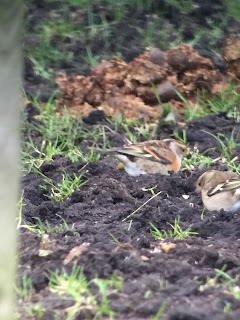 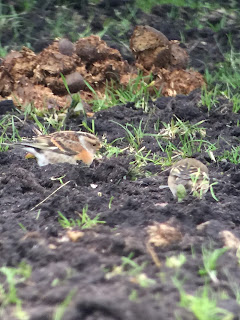 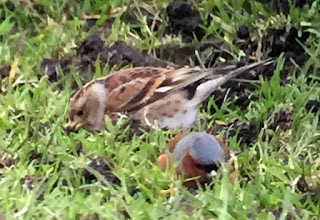 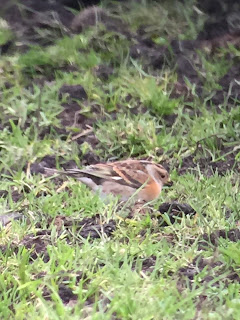 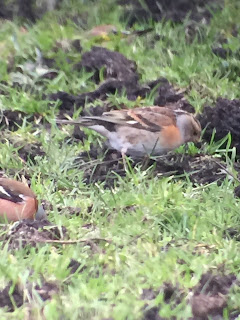 I say 'she', for that is what she is, and, on checking the plumage features, unquestionably it’s the same bird as originally found on the reservoirs. There have been precious few Brambling in London this winter so it was always my assumption that there was only one bird involved. The sites are only 2km apart, less as the Whale swims, just along the Lea overflow channel, so hardly surprising it’s just moved with the mobile Chaffinches.

Looking back at my notes I seem to see Brambling every other year on the patch, but this is definitely the closest views I’ve managed, even allowing some record shots, shame about the light, or lack of.

Whilst out I had another look for Reed Buntings but I’m afraid I have to declare them extirpated from the patch, all sightings thus far this year are clearly delusional, sorry chaps you’ll have to cross them off your lists!

It seems I narrowly missed @lolbodini when I went for a paddle in the Reed bed on Walthamstow marsh, (n.b. previously known as the ‘Dry Reed bed’, I have officially re-named it the ‘Reed bed’, for obvious reasons) two Snipe flew over it as I approached and I flushed another, which pitched down fairly quickly, though I wouldn’t like to stick any epithet on it. Apparently he didn’t see any Jack Snipe either but did see the Brambling after I left, so best wishes if you try for it.

Posted by Walthamstow Birders at 18:43 No comments:

A customer enters a pet shop.

Mr. Praline: 'Ello, I wish to register a complaint.

(The owner does not respond.)

Owner: What do you mean "miss"?

Mr. Praline: (pause)I'm sorry, I have a cold. I wish to make a complaint!

Mr. Praline: Never mind that, my lad. I wish to complain about this parrot what I purchased not half an hour ago from this very boutique.

Mr. Praline: Look, matey, I know a dead parrot when I see one, and I'm looking at one right now.

Mr. Praline: The plumage don't enter into it. It's stone dead.

Mr. Praline: All right then, if he's restin', I'll wake him up! (shouting at the cage) 'Ello, Mister Polly Parrot! I've got a lovely fresh cuttle fish for you if you show...

Owner: There, he moved!

Mr. Praline: No, he didn't, that was you hitting the cage!

Owner: I never, never did anything...

(Takes parrot out of the cage and thumps its head on the counter. Throws it up in the air and watches it plummet to the floor.)

Mr. Praline: Now that's what I call a dead parrot.

Owner: Yeah! You stunned him, just as he was wakin' up! Norwegian Blues stun easily, major.

Mr. Praline: Um...now look...now look, mate, I've definitely 'ad enough of this. That parrot is definitely deceased, and when I purchased it not 'alf an hour ago, you assured me that its total lack of movement was due to it bein' tired and shagged out following a prolonged squawk.

Mr. Praline: Look, I took the liberty of examining that parrot when I got it home, and I discovered the only reason that it had been sitting on its perch in the first place was that it had been NAILED there.

Owner: Well, o'course it was nailed there! If I hadn't nailed that bird down, it would have nuzzled up to those bars, bent 'em apart with its beak, and VOOM! Feeweeweewee!

Mr. Praline: 'E's not pinin'! 'E's passed on! This parrot is no more! He has ceased to be! 'E's expired and gone to meet 'is maker! 'E's a stiff! Bereft of life, 'e rests in peace! If you hadn't nailed 'im to the perch 'e'd be pushing up the daisies! 'Is metabolic processes are now 'istory! 'E's off the twig! 'E's kicked the bucket, 'e's shuffled off 'is mortal coil, run down the curtain and joined the bleedin' choir invisible!! THIS IS AN EX-PARROT!!

Owner: Well, I'd better replace it, then. (he takes a quick peek behind the counter) Sorry squire, I've had a look 'round the back of the shop, and uh, we're right out of parrots. 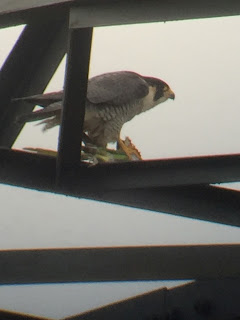 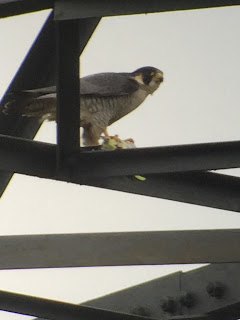 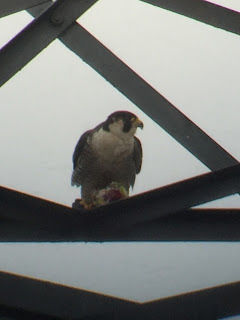 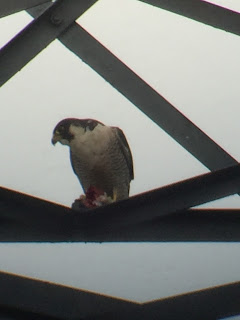 Which is a roundabout way of saying there was a Peregrine on a pylon at the Waterworks NR this morning eating a freshly dead Ring-necked Parakeet, and far from being out of Parrots, there’s another 1,999 of them around the back of the shop every night.

As it was sitting there I thought it would make an ideal candidate for a live broadcast via Periscope. After I had done it I thought there might be some sensitive souls who would find it distressing so attempted to find something cute and fluffy as an antidote, unfortunately the little Bunny that suddenly appeared hopped out of view as I eyed him up, can’t think why!

The rest of the morning was quite birdy compared to the last couple of visits to the patch. Plenty of spiffy looking Ducks in the beds; Shoveler, Teal, Pochard, Tufted Duck and Mallard but nothing new for the year, I think our enormous January list is going to haunt us for a while, still, only four weeks* till the first Spring migrant (*not a guarantee).

Twelve Stock Doves and some Greenfinch were the best of the rest in the Waterworks and it was much the same on the paddocks. No Winter Thrushes at all but Song Thrushes were especially numerous. 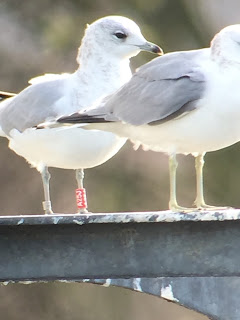 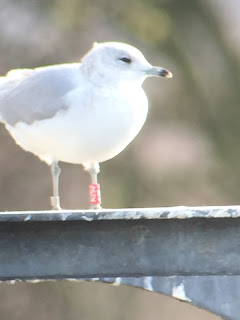 The Sun came out but the wind picked up by the time I hit the reservoirs. Highlights were a flock of 16/17 Siskin by the East Warwick hide and a German colour-ringed (A25J) Common Gull on the West Warwick. Originally rung in Hamburg and spent some time last winter in Wanstead, but appears to have come to it's senses and now with us J. The ringer kindly, and quickly, sent me this: 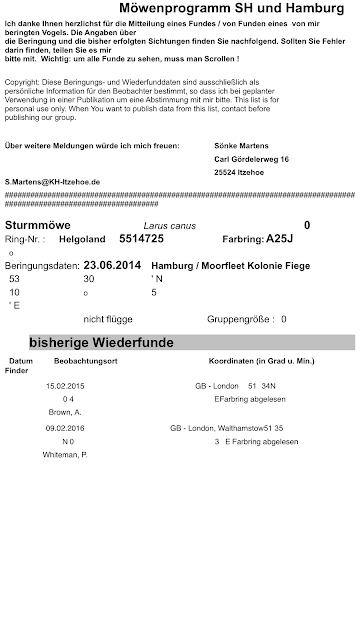 I tried to string a Yellow-legged Gull but it disappeared before I could clinch it, which is probably for the best. 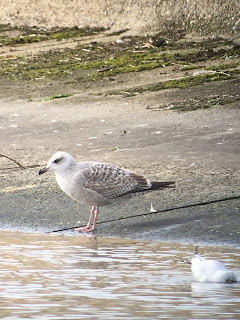 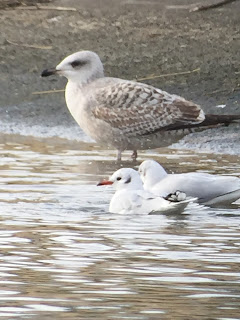 A large female Peregrine flew in from the filter beds and roosted on the No.2 reservoir pylon, always a favourite, and both Kestrel and Sparrowhawk put in appearances. I scanned the horizon for Buzzard or Red Kite but I guess they are four weeks away too.
There has been discussion about the need for a gritty, more urban-looking background picture for the blog by some of the hoody-wearing, ear-ring bedecked, punk-haired twenty-something members of the group (no, I don’t mean Pete and Dave). Hopefully their bloodlust is satisfied by the shots of a Parakeet smeared pylon. I tried to warn them where Gull-watching would lead J.

A small but recently productive group of larger Gulls are often loafing on the NW bank of the Lockwood. I've been approaching and watching them whilst sat on the ground, and then walking round so as not to flush them; and its paid off, in that they seem to let me get fairly close.

We've undoubtedly had some good Gulls this winter for an inland 'urban' site , Quite a few Yellow-legs and two 1st winter Caspian Gulls, but I thought some "decent" pics of recent Yellow-legged wouldn't go amiss as they are sometimes hardwork. This first bird was first seen sitting down and, from a distance, I really thought it was a Caspian, it looked so white-headed and snouty, after geting closer and some back and forth picture messages with friend L. Pitcher, based on the south coast, it became totally clear that this was a 1st winter Yellow-Leg, the moult in the inner median and greater coverts threw me at first, these feathers were blowing around in the wind and looked like wing damage to the bird in the field.  The 2nd generation feathers are much clearer to see in a static photo I find. 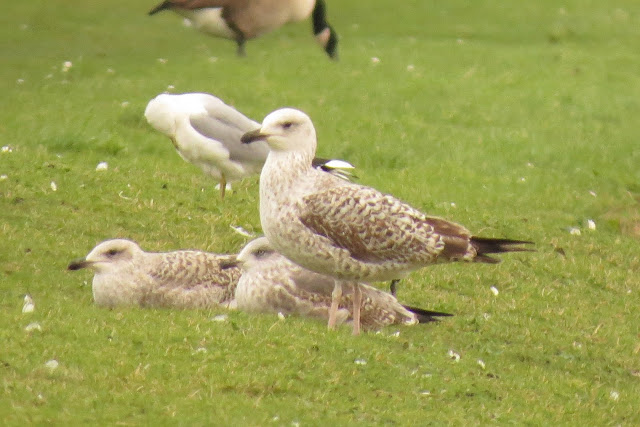 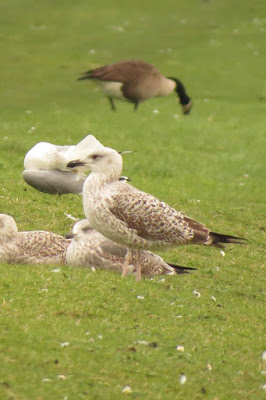 Here's the bird in flight. Note the moulted section of the wing, and faint window in the inner primaries, white upper-tail etc. 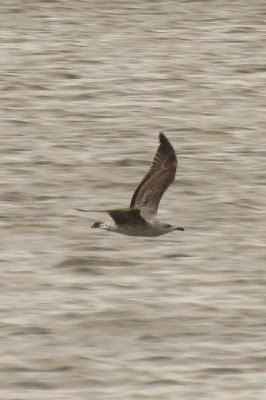 Joined below by a 2nd Winter YLG, (left) 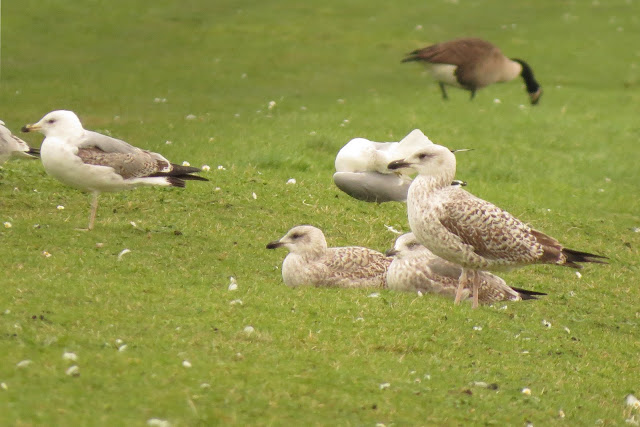 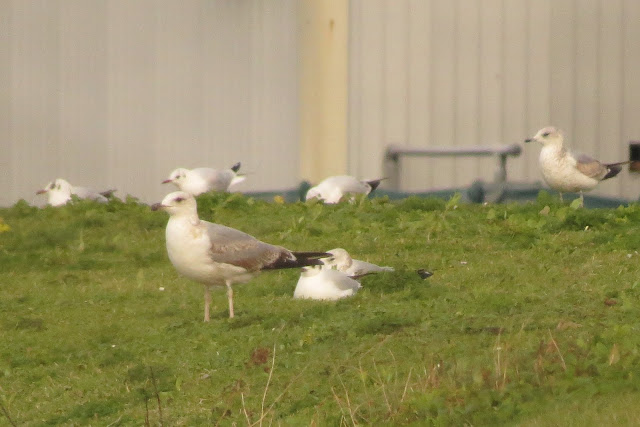 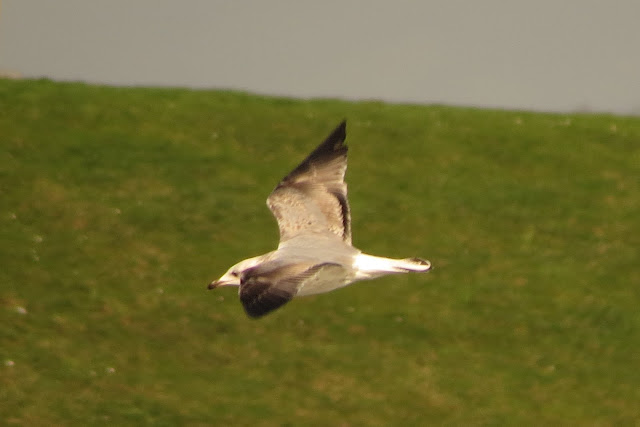 Posted by Walthamstow Birders at 19:28 No comments: