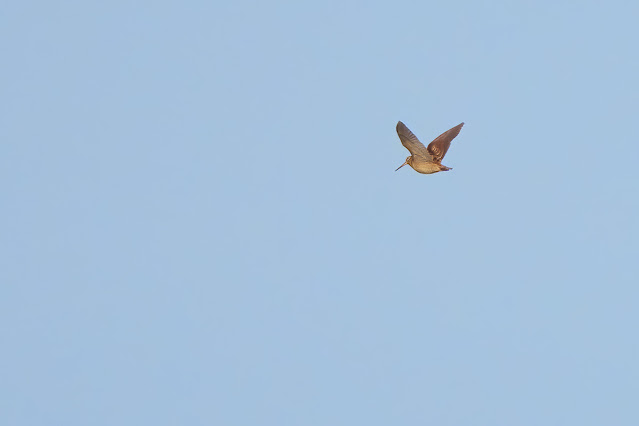 Seeing a Woodcock at the Wetlands is hard enough but photographing it...pic @OwlTurbot
Woodcock, Avocet and Rock Pipit were among the highlights of March which saw lockdown restrictions continue severely to limit access to the Wetlands for all but the last three days. The month saw the goose-fest continue with flocks of Brent, White-front and the first Barnacles as well an a exceptionally early Sand Martin. There was nothing completely unexpected but Pintail, Siskin, Blackcap, Red-legged Partridge, Wheatear, Swallow,  Willow Warbler and Rook were also added to the year list.
The 13 additions takes the total so far to 95, two above last year's figure (when restrictions were only introduced mid-March) and six above 2019. But to guard against complacency, 2021 still remains well behind the previous two years when 107 species were recorded. 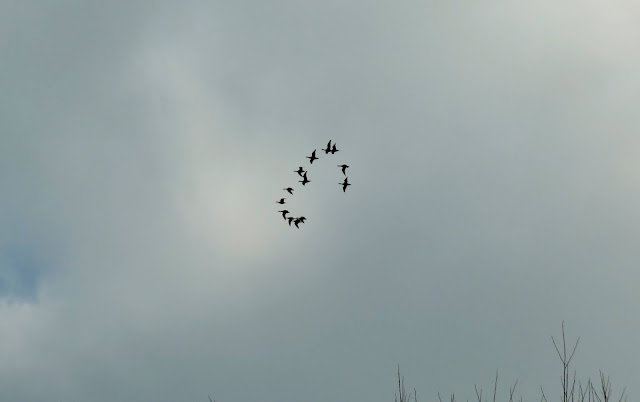 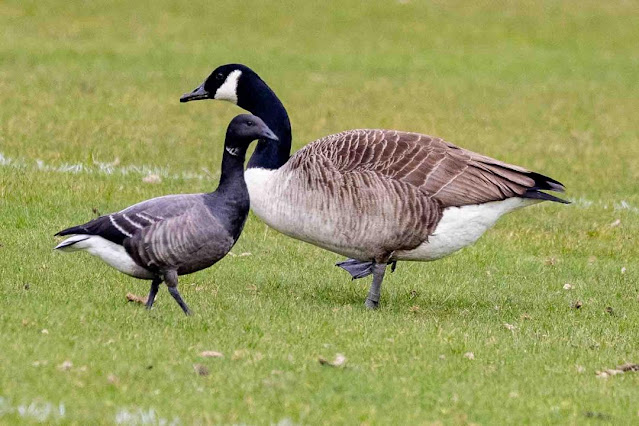 ....while another spent time between the reservoirs and playing fields pic @IvorHewstone
It was an exceptional month for geese at the Wetlands.  LB found 13 Brent Geese resting on Banbury on the 1st which flew over Lockwood before departing. It is the biggest flock anyone can remember. A more usual record was the single bird on No 5 found by DC through the fence on the 6th which stayed around until at least the 12th. It shared its time between the reservoirs and the nearby playing fields and was sometimes accompanied by the long-staying White-fronted Goose which was seen intermittently until at least the 16th. In an unprecedented winter for the species in London and the south-east, LB had 25 more White-fronts high over Lockwood on the 19th. 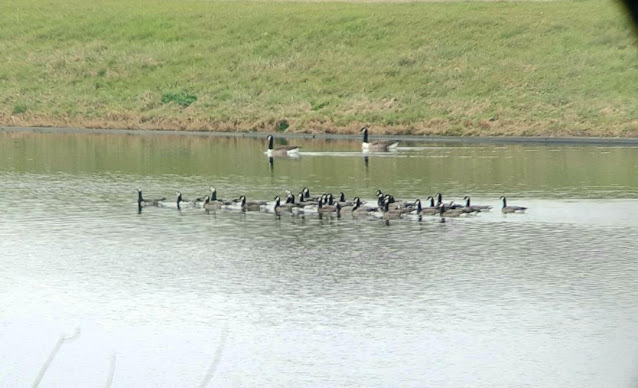 The pure(-ish) Barnacles are towards the front of this motley crew pic @ LolBodini
LB, whose loft window overlooks the north end of Lockwood, also found a 30-strong flock of small geese resting on the water on the 7th. Forensic examination of long-range photographs suggests that they were a mix of Canada, Barnacles and hybrids probably from a population on the Essex coast. But three of them looked pure enough to put Barnacle Goose on the reservoir list for the year. They make up for missing the four seen on Walthamstow Marsh on the 2nd. 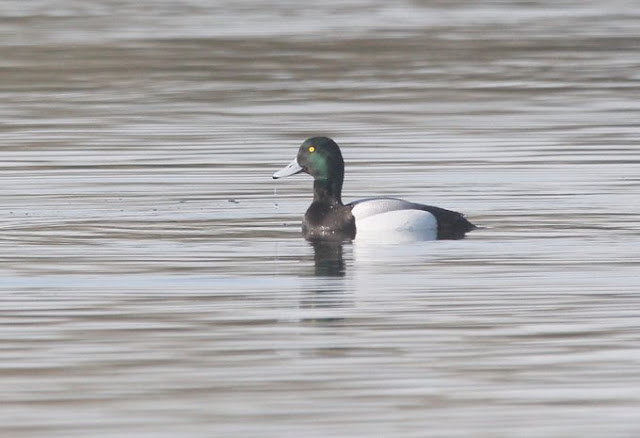 A smart drake Scaup back on the familiar haunt of No 4 pic @Chris_Farthing..... 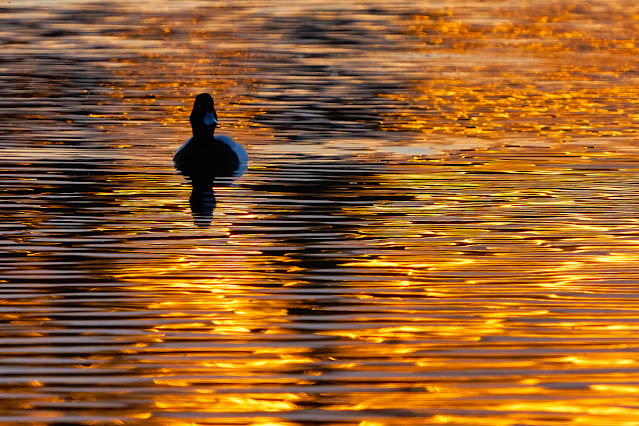 ......... which hung around long enough for @OwlTurbot to take this stunning dusk shot

In contrast, lack of access certainly had an impact on duck records with Wigeon still a striking omission from the year list. PL found the first Pintail with three on the 7th with a female staying until next day. When the Wetlands opened up fully, CF found an obliging drake Scaup on No 4 on the 30th which raised questions about how long it had been there and whether the resident winterer had returned. Up to five Goldeneye were still around into April while the odd Goosander continued to be seen until mid-month. 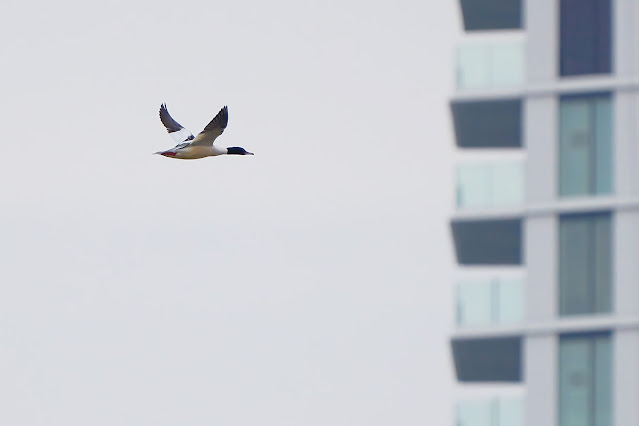 A drake Goosander making a typically flying visit to the Wetlands pic @OwlTurbot
TR found a Red-legged Partridge, which are just about annual at the reservoirs, on the 25th in a period when there seemed to have been an influx - presumably from some rearing shed - into north London. During a session to ring young, 31 Grey Herons were found to be nesting on No 1 and No 2 islands, slightly down on the last two years.
February's Great Egret continued to make regular visits to Lockwood until at least the 5th while DW, just before he departed for Alderney for the year, had two flying over on the 27th. Two Spoonbills seen on Walthamstow Marsh early on the 4th seem to have departed west without crossing Wetlands' airspace. 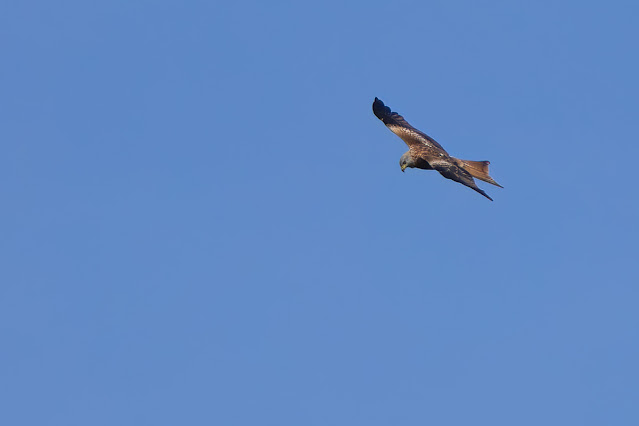 Red Kites were recorded on at least seven days in March pic @OwlTurbot
March is traditionally a good month for raptors and there were happily no restrictions at looking up at the sky. Single Red Kites were seen on at least seven days with three Common Buzzards on the 9th and singles on 19th, 27th and 30th.  With most of their favourite reservoirs out of bounds, waders were always likely to be under-recorded. The only Lapwing was seen on the 3rd but LB's loft again enabled him to see two Avocets flying north early on the 24th, ten days after he found the first one last year.
In a remarkable co-incidence, the first Woodcock was also found by the same observer two years running with PA photographing one on the 8th over the Maynards, 12 days before he saw last year's bird. The easing of restrictions from the 29th showed the Common Sandpiper had continued to winter out of sight on No 4 while a Snipe was still found in the No 1 reed-bed on the 30th. 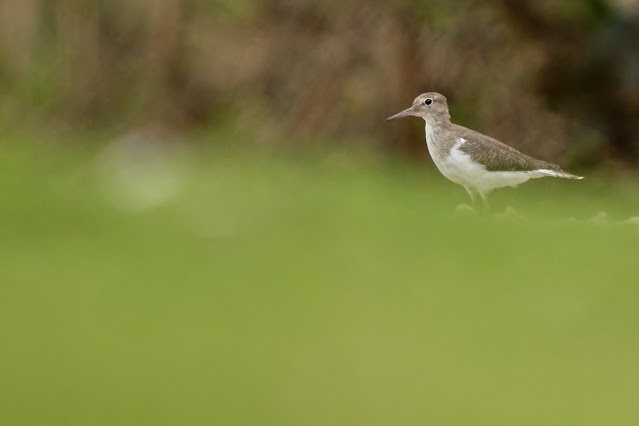 The Common Sandpiper showed itself when lockdown restrictions eased pic @OwlTurbot
Early Spring is the best time to see Rook, a scarce bird at the reservoirs. Even so four records in a month is unusual. The first was seen on the 29th by PA with three individuals - or one doing interval training over the Wetlands - next day. Three Jackdaws on the 28th were more normal.
The main reason March is one of the favourite birding months is the return of the summer visitors. They were in a hurry to get here with the first Sand Martin of the year - and the first in London - seen by RT on the 3rd. Not only was it 13 days earlier than last year but may be the earliest record at the reservoirs since 1992. Another was seen on the 5th and 7th but it wasn't until the 25th that more than odd birds were noted with 90 going through on the 29th. Swallows, with two on the 29th, were also earlier than in 2020 when the first did not arrive until April.
The first Blackcap was heard on the late date of the 20th but by the 29th, eight were singing across the site. The 29th also saw the first Willow Warbler, again several days before last year, and 13 singing Chiffchaffs. 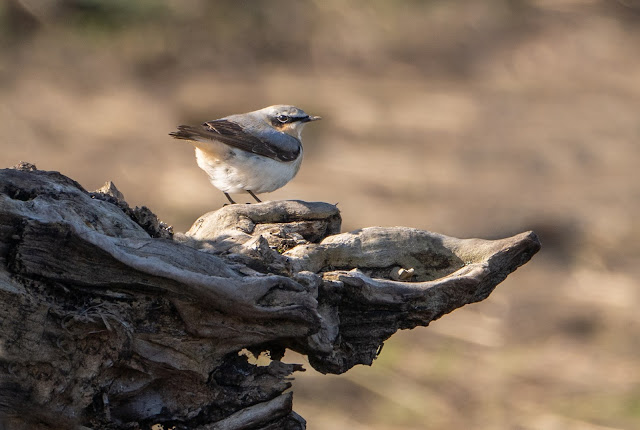 Wheatears were late to arrive but made up with good views and numbers pic AMP.... 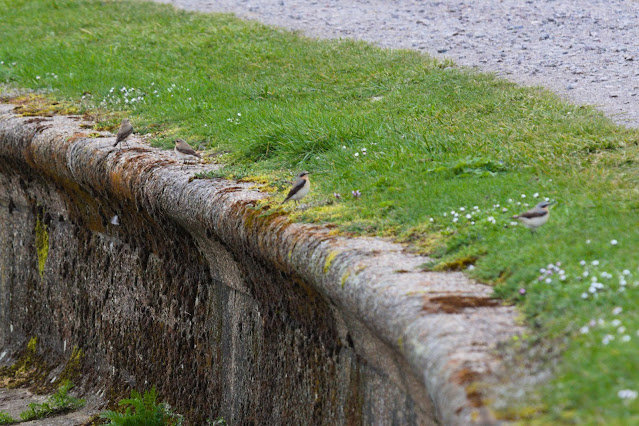 ........with small parties of mainly males seen both north and south side pic@Callahanbirder

Wheatears were, however, late this year which may be partly explained by some of their favourite areas being out of bounds. QG won this year's prize by finding the first on the 28th - 12 days later than last year - but they made up for their tardiness by arriving en masse next day. With large numbers seen across London, 11 were counted, a high total now for the reservoirs any time of the year.  The lifting of access restrictions also showed there were still a few winter thrushes around the reservoirs with two  Fieldfare and a Redwing seen on the 31st. 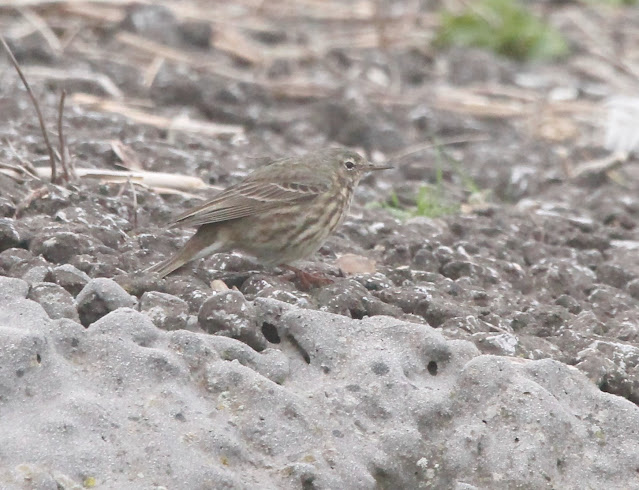 An early Rock Pipit was one of the star birds of the month pic @Chris_Farthing
Early Spring or late Autumn are the best time for Rock Pipit at the reservoirs but in the last two years it has not been seen until October. CF broke the trend when he found one on Lockwood on the 18th. A second or perhaps a Water Pipit flew over on the 27th. For the first time in several years, no Brambling were recorded but the first Siskin of the year was seen by PL on the 14th.
DB @porthkillier
Posted by Walthamstow Birders at 13:51 No comments: