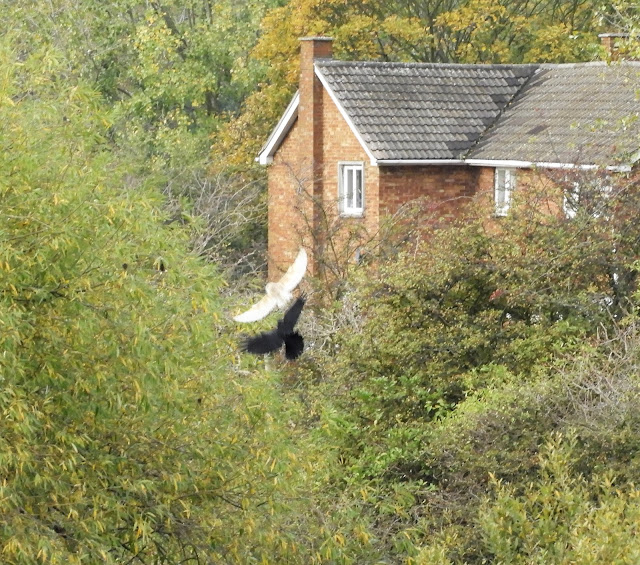 October was, depressingly, the first month  in 2018 in which a new bird was not added to the reservoirs' year list. While last October's seven additions were exceptional, it does demonstrate what a lacklustre Autumn it has been so far. This includes visible migration, for which October is usually the best month, but was very slow right across the city. The sole highlight was the second Barn Owl of the year. It leaves the annual total stuck on 139 which is now, despite such a fantastic Spring, just two above last year's figure.

Shoveler numbers remained high with 100 on the 15th with East Warwick again being the favourite haunt. A drake Wigeon was seen on the 2nd and females on the 22nd and 29th. The first Goosander of the autumn was a red-head on the 14th, a fortnight earlier than in 2016, and the first Goldeneye were a pair on Lockwood on the 28th, just one day earlier.

Waders were scarce throughout the month with no Common Sandpipers, which have wintered for several years, seen so far.  There were two Lapwings on the 17th & 19th and a Common Snipe on the 15th with two on the 30th. Green Sandpipers were, however, seen regularly - usually on the overflow channel - with a maximum count of three on the 28th.

Barn Owls are scarce birds on the patch with just two records in the last seven years. So two in 2018 is highly unusual. After one was flushed from the top of Lockwood in March, a second came out of the trees along the Lea on the 23rd where it was pursued by crows until doubling back and landing on Tottenham Marsh. Presumably the same bird  was reported two days later on the south side of the reservoirs.

Skylarks were seen or heard on the 21st, 29th and 30th. The last Swallows of the Autumn were two on the 6th. Blackcaps are rarely seen in winter on the reservoirs so the male on the 15th may be the last until the Spring. Visible migration was slim but 80 Fieldfare went into roost over Lockwood on the 25th, ten moved west on the 28th and 100 next day. The 28th also saw the largest movement of Redwing with 200 while PL heard both Siskin and Redpoll on the 21st.

Up the three Stonechats were seen throughout the month while a tardy Wheatear spent a fortnight around Lockwood and was last seen on the 15th.  The grassy sides of Lockwood used to attract regularly parties of 15 or more Meadow Pipits but numbers have decreased dramatically in recent years with a maximum of two seen during the month.

Fortunately, it is already clear that November is going to be a better month........


Posted by Walthamstow Birders at 18:19 No comments: