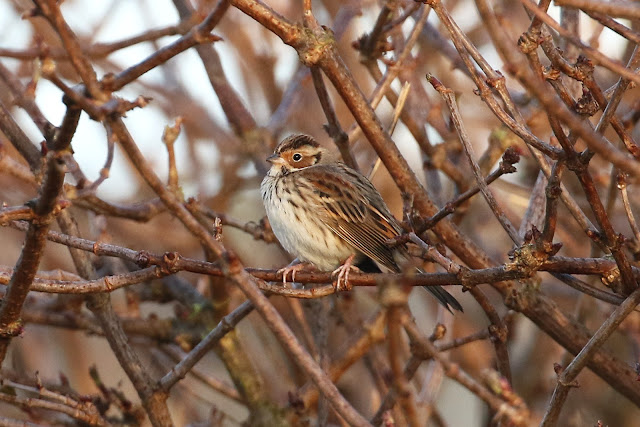 The discovery of  Walthamstow's first ever - and only London's 11th - Little Bunting put the reservoirs on the birders' map this month. It drew a steady stream of admirers who often had to return for views of what could be an elusive bird.  But it also meant that the long-staying Scaup on No 4 got plenty of visitors as did the Wetlands cafe. In all, 80 species -  including the late additions of Coal Tit and Brambling - were recorded this month on the reservoirs (with four more on the larger patch) which was exactly the same figure as last year.

Two Brent Geese seen by PL flying south over Lockwood on the 10th was a very unexpected record. Shelduck numbers built up slowly throughout the month with a flock of seven on No 5 on the 30th. The first Wigeon of the year were three which arrived with a flock of Teal on No 5 on the 8th with four more seen on East Warwick on the 14th. Shoveler numbers seemed right down on previous years which is a concern. But the drake Scaup continued to enjoy its fourth winter on No 4 and the maximum count of Goldeneye of 12 across the reservoirs on the 28th and Goosander of five on the 11th show only a slight decrease on last year. 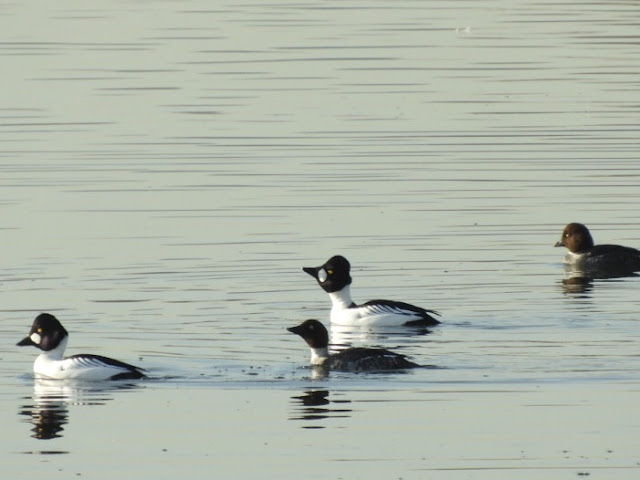 Four of a flock of six Goldeneye displaying on No 5

Last January saw both Red Kite and Buzzard recorded in January but this year the only birds of prey were the resident Peregrines, Sparrowhawks and Kestrel. The Peregrines could be seen displaying together as well as hunting regularly over the reservoirs, giving hope that they might breed in the locality. Among their intended prey on the 8th was an unusually early Oystercatcher which only escaped by landing on the water on East Warwick. The 8th also saw the first Lapwing of the year with two more flying south on the 23rd. Redshank were also not seen until March last year but the increased coverage this month saw one recorded flying south on the 21st by those waiting for the Little Bunting to appear.

The reed bed at the top of No 1 continues to attract Snipe as does the hidden lagoon on the island of East Warwick were four were seen to fly in on the 24th. At least two Common Sandpipers are wintering on the reservoirs but, largely due to the high water levels in the overflow channel which have displaced them from their favourite areas, the only record of Green Sandpiper was one on No 5 on the 21st.

A near adult Yellow-legged Gull was seen on High Maynard on the 19th while, outside the reservoirs, the second Glaucous Gull in successive years on the wider patch was found by JP on  Leyton tip on the 28th. Last year's bird, which was also a IY, moved between the tip and the filter beds but there has been no sign so far. 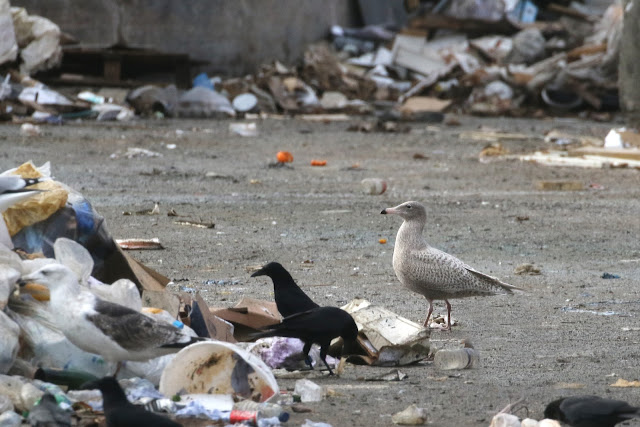 Meadow Pipits are another bird where the numbers seem well down this year on the reservoirs.  While up to a dozen could be seen on the grass around Lockwood last January, only singles were seen this month. Stonechats have also been scarce this year but a female was on West Warwick on the 28th and 29th. 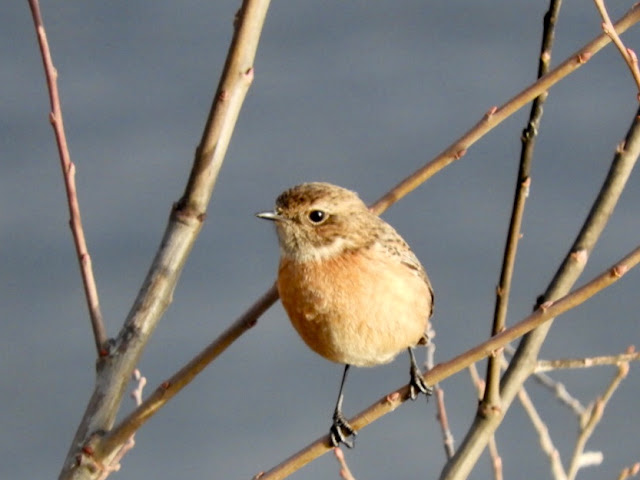 For some reason, Chiffchaff, too, seem nowhere near as common this winter on the reservoirs and on nearby Tottenham Marsh with just a couple seen at the top of Lockwood and along the Lea both north and south of the road. Reed Buntings, however, are a real success story with seven seen together in the reeds at the top of No 1 on the 1st, an extraordinary count for recent years. They moved later in the month to feed on the weeds between the Engine House and East Warwick where a nice flock of around 30 Linnets were also in residence.

It was in this area with its bigger cousins that PW and DB discovered the Little Bunting on the 19th. Although it was faithful to this small area until the end of the month, it stayed hidden in the weeds when feeding and could only be seen when it flew up occasionally into the hedge. As it was only found because it dropped in with a Reed Bunting right next to the path, it could have been there for some time. 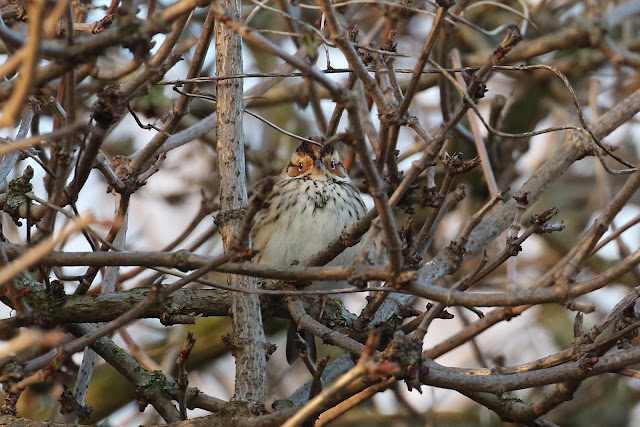 Little Bunting in typical pose hiding in the bush pic@jarpartridge

It is the rarest bird to be found on the reservoirs since LB's famed Dusky Warbler in February 2010 and, on the wider patch, since the Common Rosefinch in 2016 on Walthamstow Marsh which was also the 11th for London. The last Little Bunting in London was the wintering bird at Amwell in 2007. This was also found in January and stayed until mid-April by which time it was singing. So there may be plenty of time to catch up with it yet.....

* Late additions to the monthly list were Coal Tit, which are surprisingly scarce at the reservoirs, heard by CF on the 1st and two Brambling seen by AW between the Engine House and No 4 on the 20th.


Posted by Walthamstow Birders at 17:23 No comments: