The Patch on eBird (& Why do so few birders use eBird?)

Why do so few birders use eBird?

eBird is the world’s largest biodiversity-related citizen science project, with more than 100 million bird sightings contributed each year by eBirders around the world.

With a few minutes spent on the mobile phone app, birders can record their sightings and their data would contribute to this. Many birders spend time blogging or tweeting about their latest escapades in the field, so why not put the sightings to conservation use on eBird? 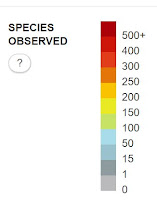 eBird is a useful tool.

To give eBird a patch watching context, Walthamstow Reservoirs is the 3rd top London ‘Hotspot’ for number of species recorded and Walthamstow Marshes is the 9th. 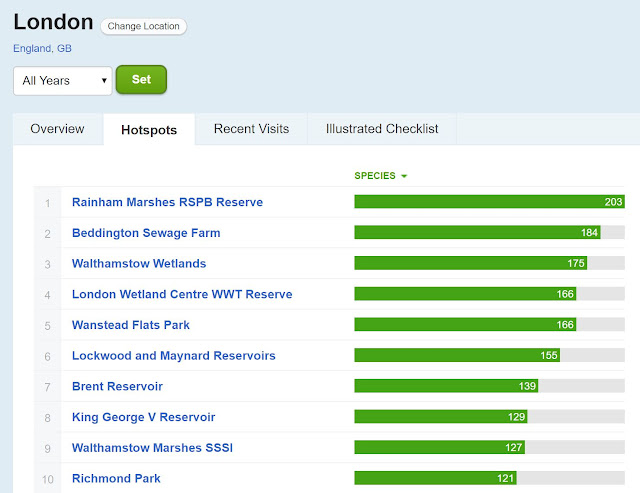 Bird blogging or tweeting, at its best, informs another birder or wildlife enthusiast of wildlife news or shares where and when to view wildlife; at its worst, it is someone’s holiday photos or latest tick (somewhere in between does a bird blog or tweet lay).

With eBird, there is no question of its usefulness. An eBird report can contribute to graphs, data and trends for the patchworker or conservationist. For example:

January to December Observations of Waterfowl on Walthamstow Marshes 1900 - 2018 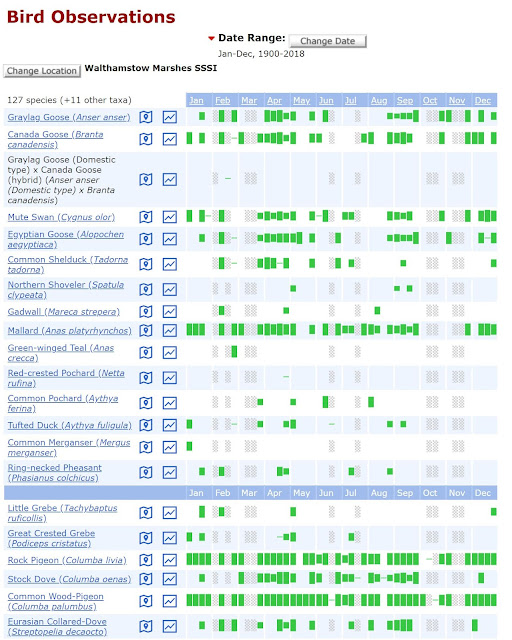 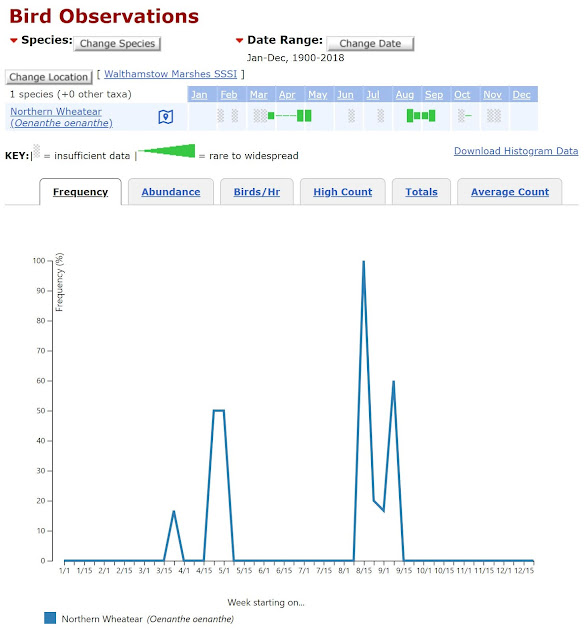 This is a link to London's eBird data (find your patch from here):


So, why do so few birders use eBird?

Posted by Walthamstow Birders at 18:02 No comments: 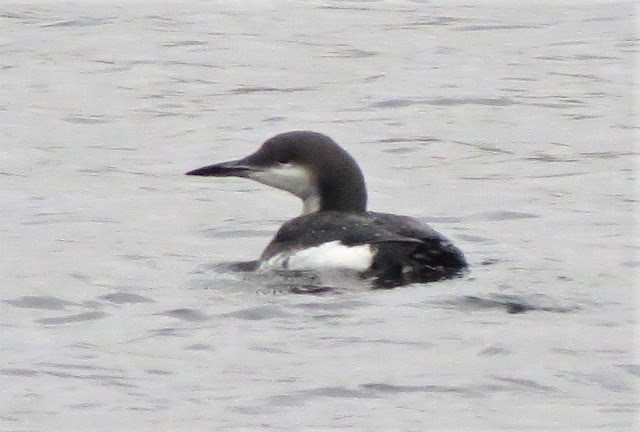 After a blank month in October, the reservoirs returned to form with four new species for the year. They included the first Black-throated Diver since 1996 along with Slavonian Grebe, Red-breasted Merganser and Avocet. November also brought another Common Scoter, Ring Ousel and Rock Pipits together with news of where some of our wintering birds breed. The four additions take the year list to 143, two more than 2017's total as well as taking the wider patch total to 150.

The first pair of Shelduck, after the post-breeding moult in the North Sea, returned to the reservoirs on the 21st.  Pintail are unusual so two records - a female on the 10th and a pair on the 19th - was exceptional. Mid-month also saw Wigeon take up residence with two on the 17th, three next day and singles on the 19th & 20th. Shoveler numbers remained high with 98 on the 4th but had decreased to 40 by the end of the month. 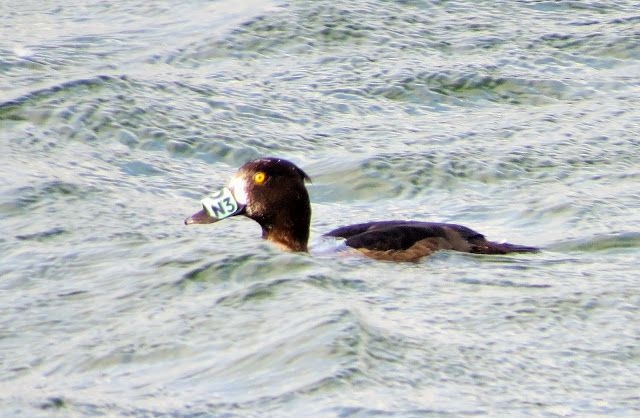 News came through this month that a Tufted Duck with the nasal band DN3 on Lockwood in September was ringed in Ampoigne, north-west France in June 2016 and had been seen the following February in the less exotic surroundings of Crowthorne, Bucks. 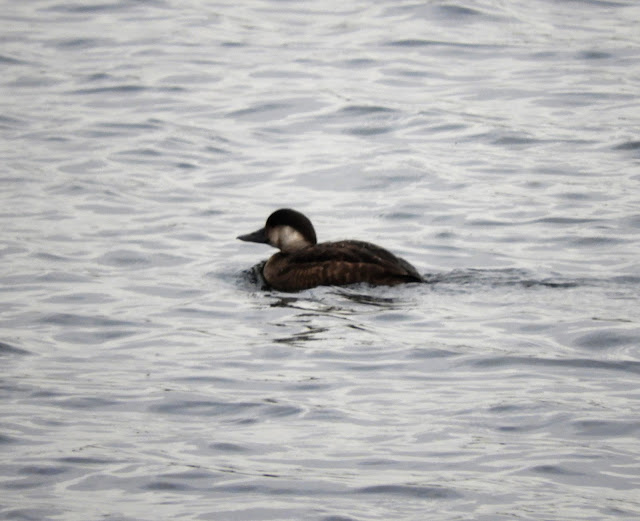 The second record of Scoter this year was a tame female type on Lockwood on the 6th. Red-breasted Mergansers are not annual on the reservoirs - with no records for either 2015 and 2016 - so the two females found by RE on No 5 on the 17th were an excellent addition to the year list. Goldeneye numbers increased throughout the month and had reached eight by the 25th. 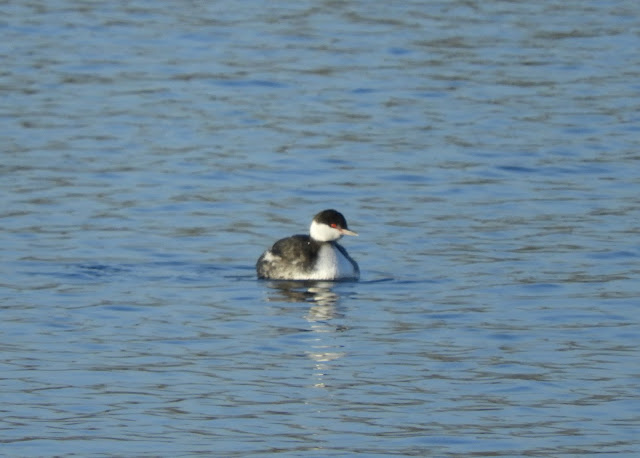 The first Slavonian Grebe since 2013 was on Lockwood

The month's stand-out bird was the Black-throated Diver found by LB on Lockwood on the 24th. It is the first record since February 1996 and the first diver of any kind on the reservoirs since a Great Northern in 2013. It stayed all day, with a brief trip to Banbury, and overnight until seen flying off south early on the 25th. It may be that this was also the unidentified diver seen briefly on No 5 on the 27th although it could have been a Great Northern with an influx of up to four at nearby King George V. In an exceptional month for Lockwood, it also attracted a winter-plumaged Slavonian Grebe on the 10th, the first on the reservoirs for five years. 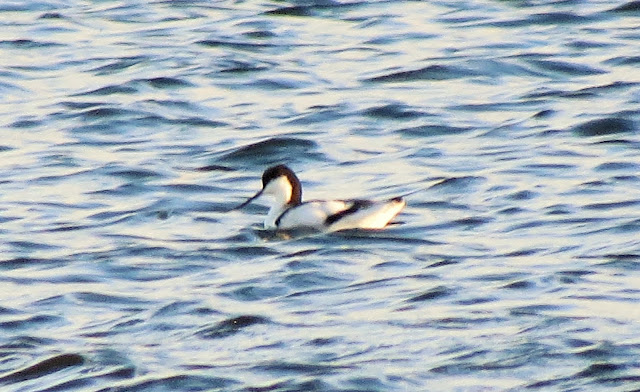 In what has been a poor autumn for waders, the discovery of an Avocet on East Warwick by TR on the 19th was a treat - particularly as it has been a bogey bird for many of the local birders and stayed long enough to be added to lists. It spend much of its time swimming with the ducks. Until a party of five on Lockwood, which were also seen swimming, last year, there had not been an Avocet at the reservoirs since 2013.

An Oystercatcher was on No 5 on the 25th with  single Lapwings on the 4th and 9th and two on the 26th and a Common Snipe on the 10th. A maximum of four Green Sandpipers were seen on the 25th although they often go missing from the overflow channel while again no Common Sandpiper was recorded. 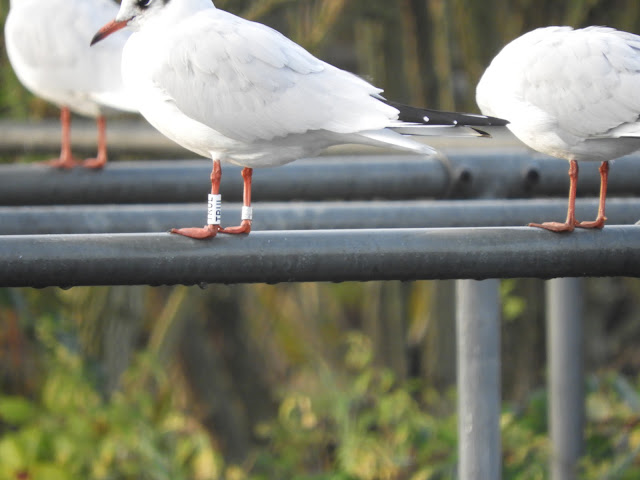 A Black-headed Gull with the white colour band TRUL by Low Maynard in early November turned out to be over eleven years old and very well travelled. It had been rung as an adult in Hamburg in March 2010 and has spent the last two summers at least breeding in Poland close to Russian border. 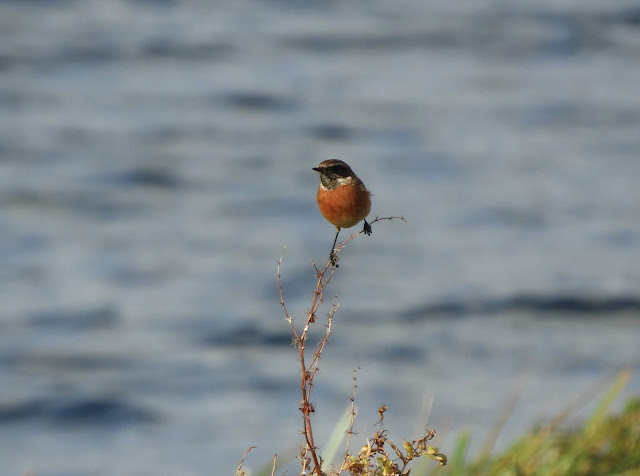 Viz mig continued to be very light with very few finches or thrushes seen overhead. The only Skylark was on the 10th around Lockwood which was also where three much scarcer Rock Pipits were found by LB on the 1st. Up to three Stonechats regularly visited the reservoirs from their wintering quarters on Walthamstow Marsh. The second Ring Ousel of the year was a late male which flew past RT south when he was fishing on No 5 on the 8th while small numbers of Fieldfare continued to be seen early in the month. Three Chiffchaffs were seen on the 25th and another Siskin flew over on the 4th.


Posted by Walthamstow Birders at 07:15 No comments: