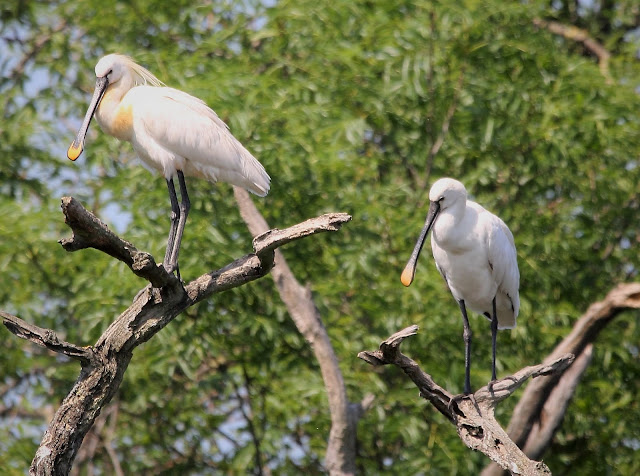 A pair of Spoonbills graced the Wetlands in May pic @Chris_Farthing

May's undoubted highlight was the appearance of a pair of spectacular Spoonbills. One or more of the pair were seen on at least four days with, even more excitingly, mating witnessed when the pair visited the heronies on  No 1 & No 3. Along with explosion in breeding numbers in the UK in recent years, their behaviour raises hopes the Wetlands might be seeing more of them in future years.

May also saw regular appearances from a species whose population is very much going in the opposite direction with a Cuckoo also seen and heard on four days. More expected additions to the annual list were Garden Warbler and Common Redshank which takes the number of species seen so far in this extraordinary year to 113. This is only three below 2019's total which, given the continuing restrictions to access, shows the Wetlands is still pulling in the birds.

Shelduck are one of the earliest breeding ducks and three broods were seen on the 30th. Their biggest challenge now will be to escape the attention of the gulls looking to feed their own growing families. Two Shoveler,  perhaps failed breeders, were seen on the 29th with four next day. 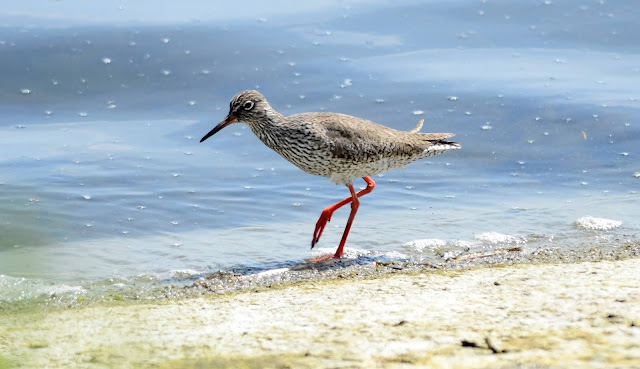 The lack of early access as well as the fine weather helps explain why it was another poor month for waders. But the 6th saw the first Redshank of the year arrive for a two-day stay, nearly two months after the first record in 2019. Oystercatchers were seen on the 4th, 6th and 30th with a pair  on the 26th.

Little Ringed Plovers seemed much scarcer than usual with just one on the 19th. In contrast, the exceptional run of Whimbrel records continued when, on one of the rare gloomy days, RE had seven heading north. Up to three Common Sandpipers were seen daily during May with the last recorded on the 25th - eight days later than the final bird last year.

Two adult Mediterranean Gull went north noisily, with a brief stop on East Warwick, on the 9th. After last year's depressing blank, it is great to see Common Terns back nesting at the Wetlands.  Four pairs have taken up residence on the floating platform on East Warwick, ignoring the chain of special tern rafts built for them on West Warwick. Hopefully, they will expand across the Wetlands in the future. Three Arctic Terns were seen on the 2nd when rain disrupted their journey north with one next day. 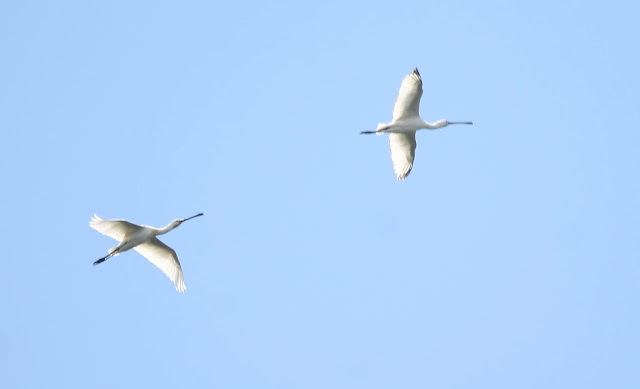 When CF spotted two Spoonbills circling over the Wetlands on the 18th before moving off, it seemed like the birds were only making a flying visit from Rainham where they had been resident for several days. But to the joy of patch birders, he re-found the pair on the 21st among the herons and egrets on No 2 island. This time they spent the day here and on No 1 with a quick feed and brush up on East Warwick.

Even more remarkably, CF found the adult on East Warwick island on the 25th giving weight to the idea that the well-travelled pair, which have also been seen in Kent and Surrey, may have roosted on the reservoirs in the intervening period. The final sighting this month was the immature again circling East Warwick on the 31st. 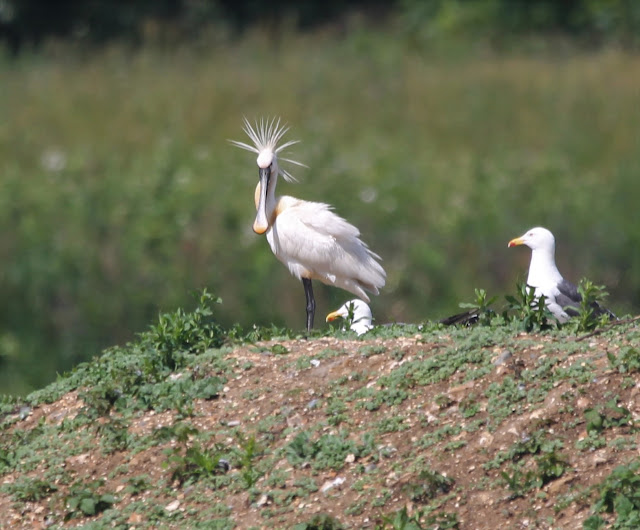 The last records of  Spoonbill were three high over West Warwick in September 2016 with a fly-through single three years before. The last bird to land was one which spent much of the day on East Warwick island in June 2006. Although this month's pair were an adult and immature which made successful breeding unlikely, their behaviour has raised hopes that Spoonbills may soon follow in the footsteps of Little Egrets and colonise the reservoirs. 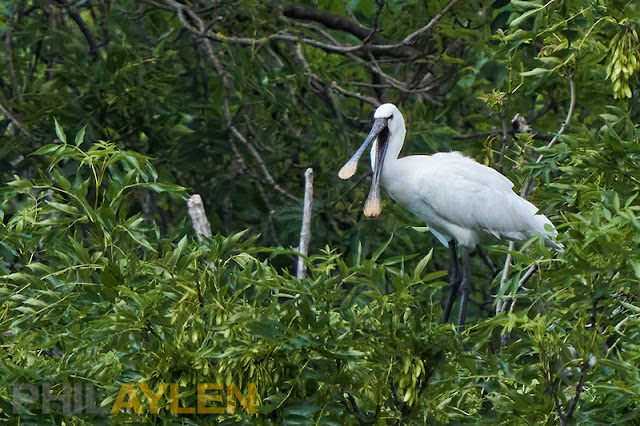 ……...And showing off its bill pic @OwlTurbot

One species which may already be nesting nearby after an absence of several years is Hobby. Birds were seen hunting on the 2nd, 7th and 13th with two on the 10th with further records in early June. This compares to just one sighting in May last year.  Two Buzzards were seen on the 2nd, with singles on 10th, 16th and 17th. while Red Kites were recorded on the 10th and 17th.

It has been a good number of years since the reservoirs have echoed regularly to the sound of Cuckoo so this month's records has been very welcome. The first sighting was on the 7th,with birds seen or heard on the 9th, 10th, 21st and 30th with other records from Walthamstow Marsh. Garden Warbler made it onto the Wetland's list when what was thought to be the bird holding territory at  north end of the marsh kindly made a visit on the 12th. Single Wheatears were seen on the 1st, 3rd and 5th. 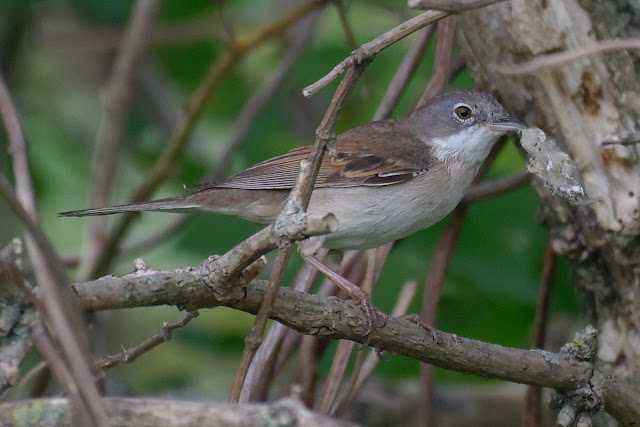 Both Green and Great Spotted Woodpeckers are believed to have bred on the Wetlands while Sedge Warblers and Lesser Whitethroats, along with Whitethroats, Blackcap, Reed Warbler and Chiffchaff, continued to sing throughout the month. DW's survey work also suggests the reservoirs hold 10 Cetti's Warbler and seven Reed Bunting territories as well as two pair of Goldcrests. The nest boxes are hosting 11 pairs of Blue and 13 pairs of Great Tits which have also set up home in the Swift tower until the Swifts make use of it next year ….hopefully.

Posted by Walthamstow Birders at 16:37 No comments: