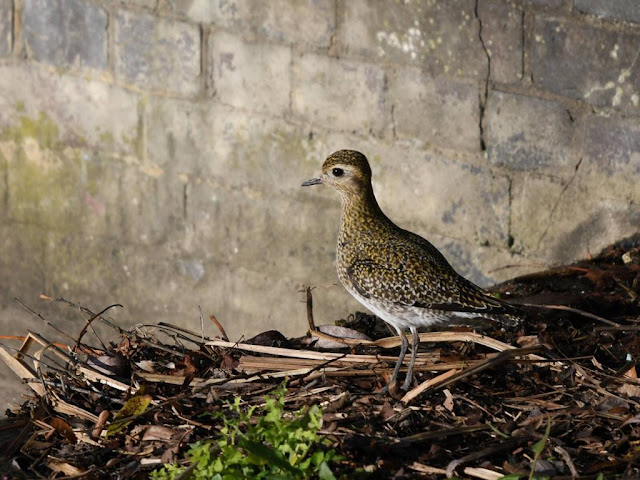 This smart Golden Plover was the final addition to the year list  pic @olistephenson
December, often a lacklustre month, carried on the good birding of the year with the first Golden Plover of 2020 as well as continued appearances of White-fronted Goose and Yellow-browed Warbler. Firecrest and yet another Great Egret were also recorded along with good numbers of Lapwing and Green Sandpipers.
This final addition to the year list takes it to a record 146 which, given the heavy restrictions on access in the Spring, is remarkable. In 2019 only 133 species were seen while 143 were counted in both 2018 and 2017. The only regulars missed were Garganey, which could easily have slipped through unseen when parts of the Wetlands were out-of-bounds in Spring, and Barnacle Goose although the White-front was a more than adequate replacement. 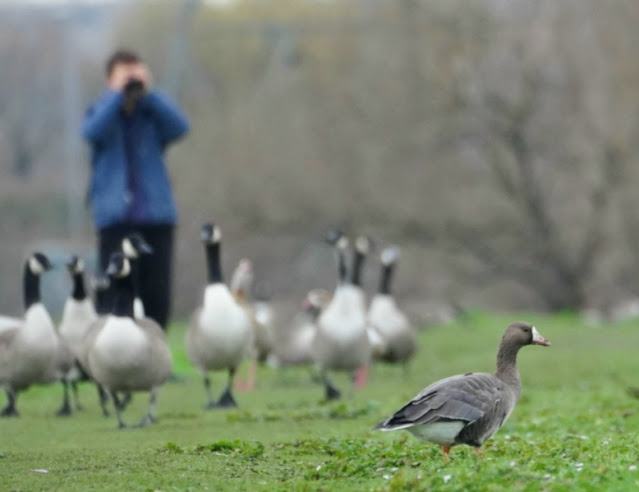 ............ and seemed to get more approachable the longer it stayed pic @sjnewton
The Russian White-fronted Goose continued its welcome stay at the reservoirs until the 3rd before moving to Walthamstow Marsh. But it returned - presumably when disturbed - on at least the 16th & 19th and was seen to be heading this way on other occasions perhaps to roost. Shelduck numbers  slowly built up with seven on the 17th.
A Wigeon was seen on the 4th. Goldeneye numbers increased slowly to six by end of the year with up to four Goosander seen as well. There was sadly, however, no sign of the regular drake Scaup which had returned to No 4 in late November or early December for the last six winters. 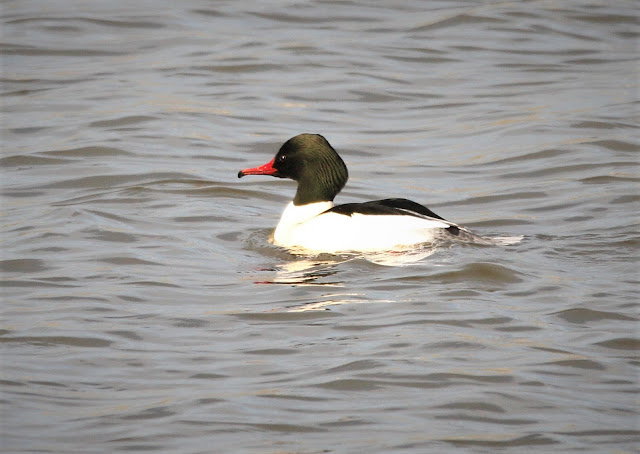 Among the usually flighty Goosander was this obliging drake pic @Chris_Farthing
Wader of the month and perhaps year was the amazingly tame Golden Plover found by OS on High Maynard. It is the first at the Wetlands since one flying over in the gloom in 2017 and the first on the ground anyone can remember. November's pulse of Lapwings  continued early in the month with 14 on the 1st, two on East Warwick island on the 7th and a single next day. 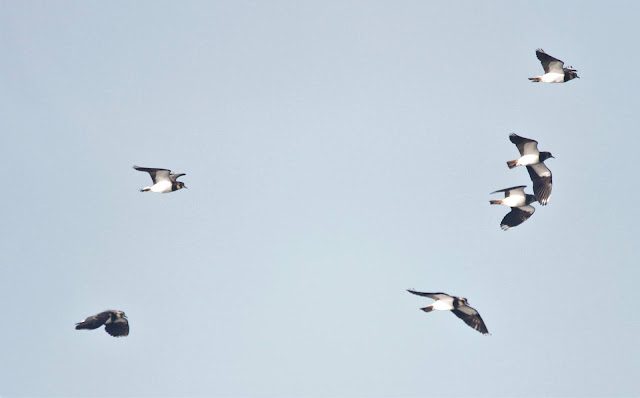 It has been a very good autumn for Lapwing at the Wetlands pic @Chris_Farthing
The wintering Common Sandpiper was seen regularly on Nos 4 & 5 while the very high water levels in the overflow channel increased sightings of Green Sandpipers throughout the month with a maximum of five together on the 9th.  The fourth Great Egret of the year - a once rare species being seen with increasingly regularity across London - was found by DW on the 4th. A Buzzard on the 1st got a frosty welcome from the local crows. 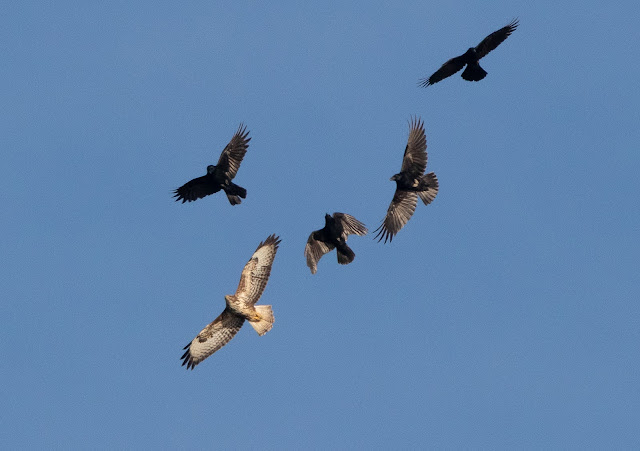 This Buzzard's Wetland visit was not the promised peaceful experience pic @EugeneDH_Bass
Another Coal Tit sighting on the 7th makes this the best year in recent times for this once-rare visitor to the reservoirs. Much more excitement was generated, however, by the continued presence of the Wetlands' first Yellow-browed Warbler which was seen regularly along the Lea up to the 7th. It was again recorded on the 14th & 17th by when it was spending more time on the other side of Tottenham Marsh where it was being seen occasionally to the end of the year. As often happens, one scarce bird leads to the discovery of another with DC hearing a Firecrest on the 1st as he waited to re-connect with the Yellow-browed. 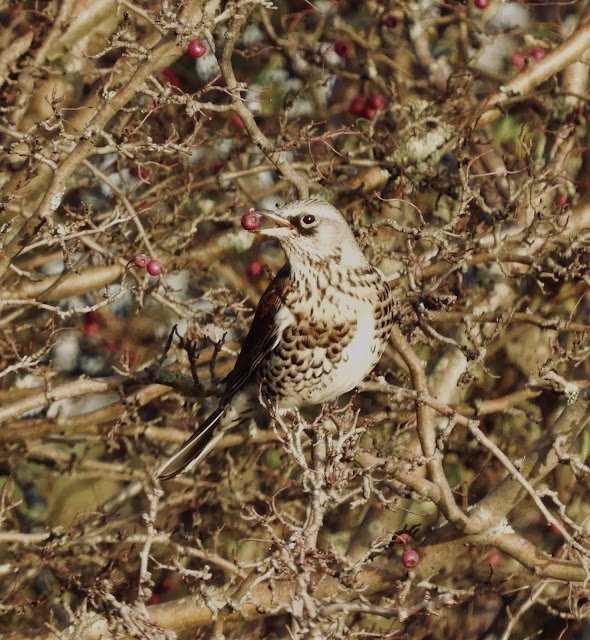 Only a few Fieldfare have so far stopped to enjoy the berries pic @porthkillier
A last Skylark of the year was seen on the 14th and more Meadow Pipits than in recent years are wintering. But very small numbers of wintering thrushes fed on the reservoirs although there was a movement of 18 Fieldfare and 25 Redwing on the 15th. In contrast, it continues to be an excellent winter for Stonechat with at least five counted on the 11th. 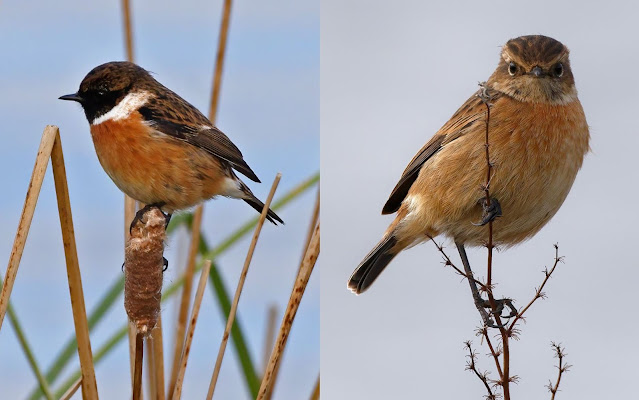 Two of five or more Stonechats which graced the Wetlands in December pic @sjnewton
DB @ porthkillier.
Posted by Walthamstow Birders at 16:15 No comments: