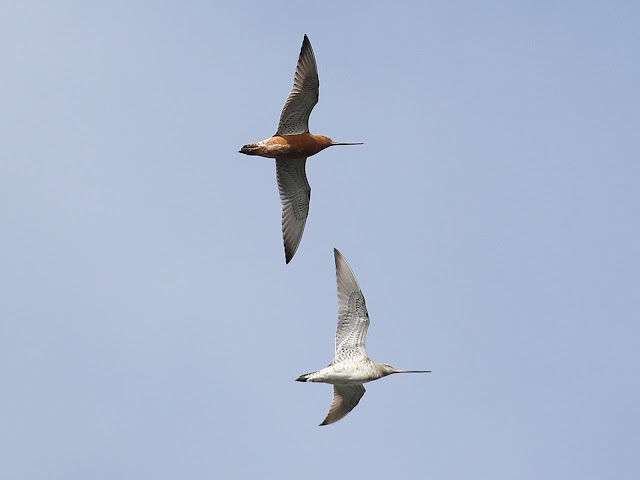 While the Wetlands - unlike many reserves - remained open throughout April, the restrictions to prevent the spread of Covid-19 continued to limit access. But those who lived near enough kept plugging away and managed to record all the summer breeders and most of the expected passage migrants. In all, 16 species were added to the year list - Brambling, Swallow, Willow Warbler, Sandwich Tern, House Martin, Sedge Warbler, Yellow Wagtail, Reed Warbler, Swift, Common Whitethroat, Lesser Whitethroat, Common Tern, Whimbrel, Arctic Tern, Dunlin and Hobby.

The discovery, however, of Common Redstart, Cuckoo and Whinchat a couple of hundred metres away - and the fact that 24 species - eight more - were added to the year list last April - was a sign that some species must have slipped past unnoticed before the site was open or in areas where access is not permitted. This might explain why the 109 total at the end of April is four down on last year and 17 below 2018's record 126.

Another factor may have been the largely settled weather which, while encouraging some species to return to the Wetlands earlier than normal, enabled passage birds to keep flying north without stopping. There seem to be far fewer Willow Warblers, for example, in London than usual. But among the highlights of the birds which were recorded were, incredibly, three more Bearded Tits and unprecedented numbers of Bar-tailed Godwits and Whimbrel.

Shoveler numbers, perhaps helped by less disturbance, were higher than in recent years with 13 counted on the 22nd. Wigeon records book-ended the month with a single bird on the 1st and two on the 30th. The last Goldeneye was seen on the 5th - 11 days earlier than the final sighting of last  Spring although a late bird might have been hiding on West Warwick, one of their favourite reservoirs. It looks as if as many as five pairs of Shelduck might be breeding but the gulls, as usual, will take a big toll on their young. 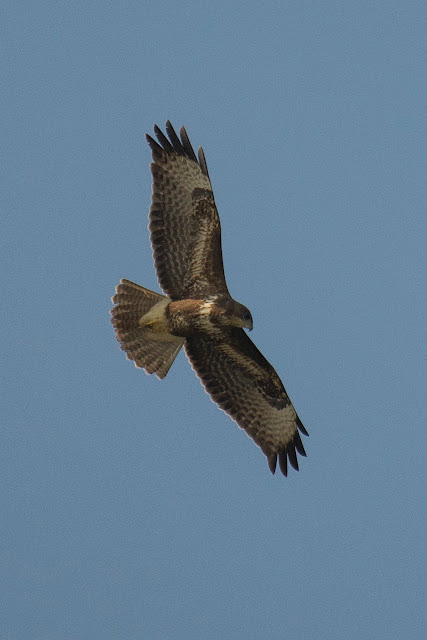 Buzzards were seen regularly over the Wetlands pic @sjnewton

Red Kites were recorded on at least six days with two on the 12th, 19th and 27th but more were seen just off site. This was also the same for Buzzards with around 15 seen from the reservoirs alone. A probable Marsh Harrier moved through low over No 1 late on the 12th. The first Hobby was seen by LB hunting down the overflow channel on the 29th. It has been several years since Hobby bred close enough to the reservoirs to hunt over them during the summer so the fact it was seen next day too is hopeful. 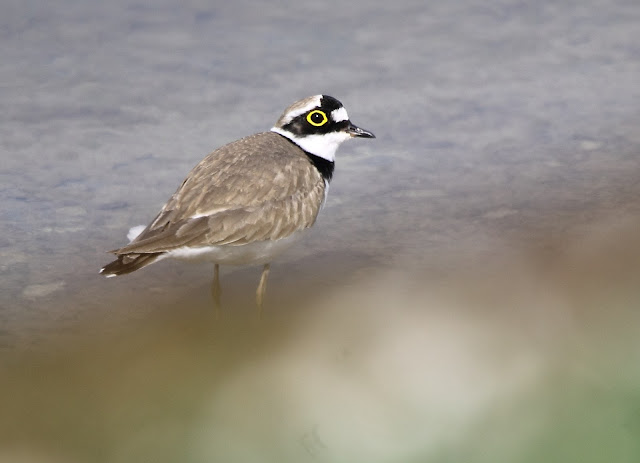 2020 had been a surprisingly poor year for waders but April helped fill some embarrassing gaps on the annual list. Up to four Oystercatchers and Little Ringed Plovers were seen in the month which might suggest that they are breeding nearby. LB, who has the advantage of over-looking Lockwood from his house, had 12 Whimbrel flying north on the 28th in murky conditions and two more going the opposite way next day. 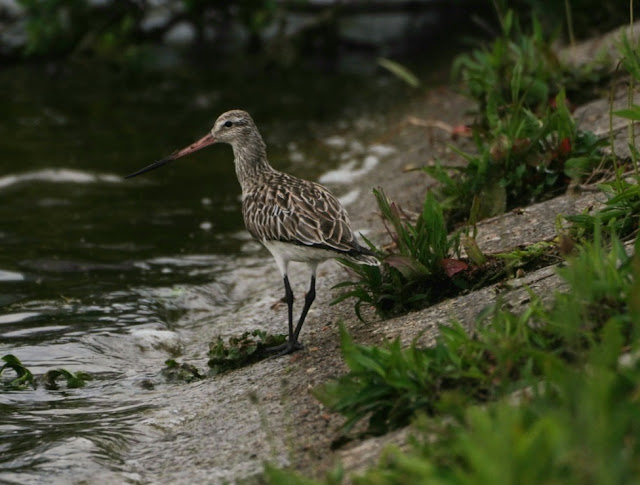 The rain of the 28th also saw seven Bar-tailed Godwits recorded. They were part of a remarkable passage this Spring birds with 18 on or over the reservoirs for a species which is normally just about annual. Seven more including another on the East Warwick island were seen on 20th, with two on the 13th and one which spent the day on No 4 on the 29th.

The 29th also saw, belatedly,  the first Dunlin of the year feeding on East Warwick. Single Green Sandpipers were seen on the 14th and 16th while a Common Sandpiper on the 17th may have been the first returning migrant - two days later than in 2019. Greenshank and, amazingly, Redshank have still to be seen this year as well as Black-tailed Godwit, usually the commonest of the pair.

After a major decline over recent decades in the Grey Heron colony at the Wetlands, numbers seen to be stabilising with between 42 and 45 nests counted. They were joined by at least 20 pairs of Little Egrets but survey restrictions mean the final total is certain to have been closer to last year's 37 nests.

The good run of Little Gulls continued with an adult on Lockwood on the 19th. Arctic Terns are another species whose migration can be disrupted by bad weather with ten waiting for the heavy rain to pass on the 28th - a day earlier than their first appearance last year. They formed a mixed flock with Common Terns which were first seen on the 18th, ten days later than the first sighting in 2019.
But the good news is that several pairs were still feeding on the reservoirs at the end of the month which must raise hopes that they will make use of the new rafts.  Four Sandwich Terns flew through on the 6th, two days later than three did the same last year. 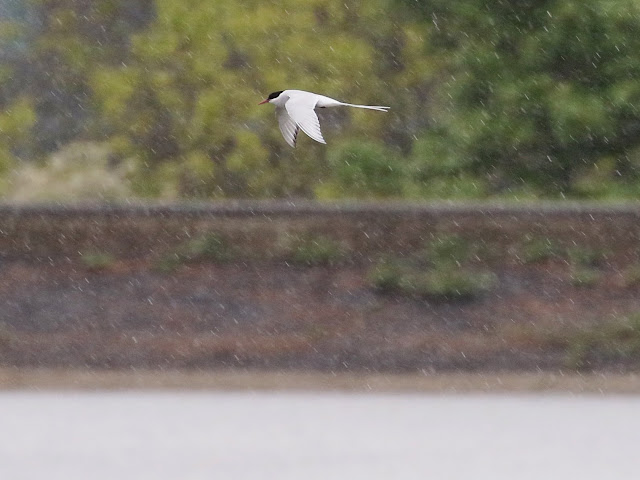 It has continued to be a good Spring for Rooks with two seen on the 3rd and singles on the 7th and 14th. After the excitement of wintering Bearded Tits which seemed to have finally departed in mid-March, one was again heard on the 9th. But when DW tracked it down next day, he found it was not only an un-rung so a new bird but was also with two other males. At least one stayed until the 10th. 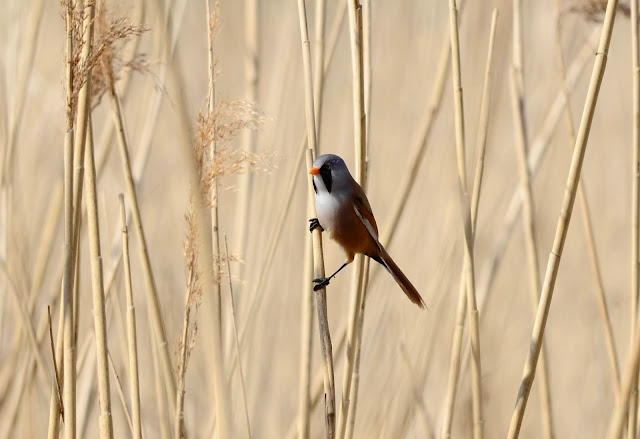 Swifts were one species which definitely arrived back ahead of schedule. The first sighting was on the 13th, 12 days earlier than last year and ten days ahead of 2018. By the 22nd, more than 100 were feeding over the reservoirs, at least a week before the large arrivals last year.  The first Swallow was seen on the 4th, two days behind last year with the first House Martin on the 6th, four days later than in 2019. The rain at the end of the month saw good numbers of both and Sand Martins feeding over the reservoirs..

Warblers in general seemed to be earlier than recent years. The first Sedge Warbler on the 8th was a day ahead of 2019 and six days before 2018's first bird. Even better news was that for a species now reduced to just a couple of pairs, no less than six were singing on the 11th. Reed Warblers,  too, arrived slightly ahead of schedule with the first on the 12th, two days earlier than both the previous two years.

Willow Warblers were slightly delayed with the first on the 5th. But this might be down to the fact that early visits to check for singing migrants were not possible this year. The first Lesser Whitethroat on the 14th and Common Whitethroat the day before were also just earlier than the previous two years.

Yellow Wagtails can make a claim for being the most regular migrant with the first arriving on the 8th, just a day later than in both 2019 and 2018. Wheatears were seen on at least seven days with a maximum of four on the 18th. The Wetlands now seems a regular Spring stop-off site for Brambling. Despite the limited access, a female was seen at the bottom of No 3 on the first two days of the month.

DB @porthkillier
Posted by Walthamstow Birders at 20:07 No comments: