A Spot of Patching

On Lockwood reservoir:
GH
Posted by Walthamstow Birders at 17:37 No comments: 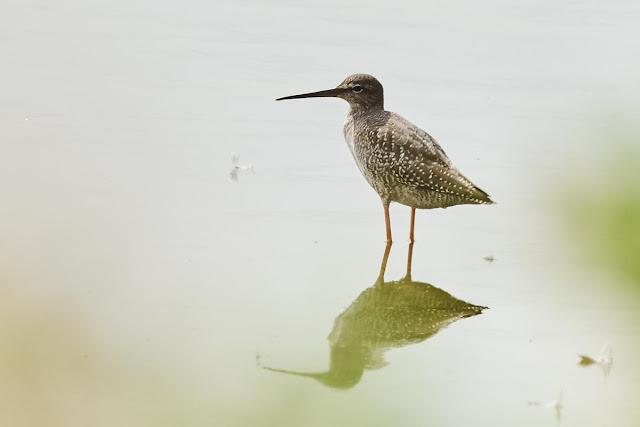 The long-awaited draining of Lockwood finally started towards the end of August and almost immediately drew in the first 'gettable' Spotted Redshanks on the reservoirs for 30 years. But the continuing construction of the track around Lockwood also restricted access throughout the month to evening and weekends which meant the best vantage point for daytime migration was largely out-of-bounds. Every cloud has a silver lining and the increased focus on the southern reservoirs helped turn up Common Redstart as well as at least a few of London's Spotted Flycatchers.

Walthamstow holds a nationally important count of post-breeding Tufted Ducks and PL recorded 2,400 on the 13th. Gadwall and Shoveler numbers began to build up slowly with nine Gadwall and eight Shoveler by the 16th, largely on East Warwick. The three young Shelduck hung around for much of the month. As Lockwood drained, it became a magnet for Little Egrets with 36 counted on the 27th.

Sparrowhawks were again increasingly obvious after breeding with birds frequently seen hunting or soaring overhead. PL saw one young Kestrel at the traditional usual nest hole which may explain why this species, too, was more often recorded. There was more good news with a pair of Peregrines re-appearing at the reservoirs mid-month which could often be seen and heard on the central pylon. Three Buzzards were seen on the 24th and singles on the 25th and 28th while hunting Hobby were seen on 5th, 27th & 28th. 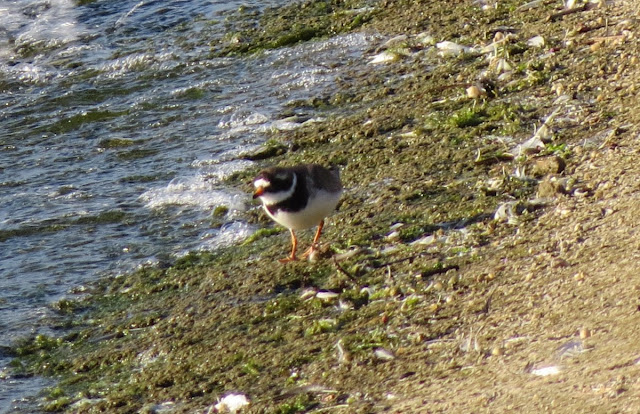 Ringed Plover - a new addition to @LolBodini's house list. He left the house to take the picture

Little Ringed Plover were only seen on the 13th and 15th and were unusually matched by Common Ringed Plover records this month. The first was spotted by LB on the side of Lockwood from his loft on the 18th  while a second was flushed by a Sparrowhawk and departed high and in a hurry on the 30th. Lapwing continue to be relatively scarce with just a single on East Warwick on the 5th.  Dunlin records were also fewer than usual probably again because of lack of visits and disturbance on Lockwood. Singles were recorded on the 1st and 31st with three on the 5th while Green Sandpipers, commoner in winter than the autumn, were seen on the 21st and 26th. The highest count of Common Sandpipers was 15 on the 29th. 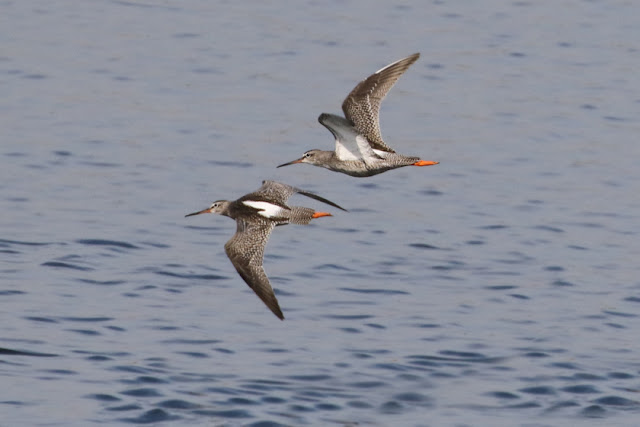 The highlight of the month - and not just because I found the first - were a pair of Spotted Redshank  on Lockwood from the 26th which stayed, despite all the disturbance, until the end of the month. Four were recorded in 2013 but they only stayed for 20 minutes which explains why they were either new for the patch regulars or the first - in the Prof's case - since East Warwick was drained in 1984. Amazingly, they weren't together initially with the second found by GJ who though he was watching the original bird - only to be told it was actually further up on the other side of the reservoir. While tame and obliging at the start, they became increasingly wary which may have been due to all the flashing lights and machinery they saw. Intriguingly they were apparently joined briefly by a third shank on the 28th. Single Common Redshank were seen on the 1st and 17th with two on the 10th while the only Greenshank recorded were a pair on the 15th. 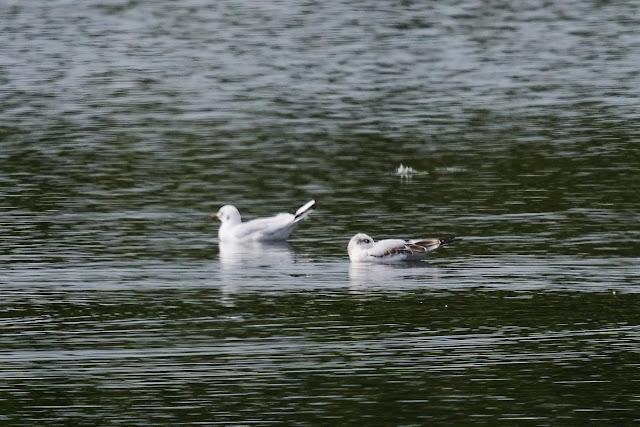 The juvenile Mediterranean Gull which had taken up residence up the valley at KGV kindly made an appearance on Lockwood on 26th for those coming to see the Spotted Redshank. The only Little Gull of the month was seen by MM also on Lockwood on the 12th while the first returning Common Gull was seen next day. Two more Common Terns had fledged from the raft on Lockwood by the 5th with the sixth and last on the 13th. But all the adults and young had disappeared by the 23rd - perhaps encouraged not too hang about as long as usual by the construction work. The only other terns seen were a distant party of seven on the 26th which may have been Arctic.

Right until the 31st, small numbers of Swifts could still be seen with the House Martin flock over No 5 and the filter beds early in the day while the insects were low. In contrast, the resident Sand Martins seem to have moved out by the 13th but small parties could be seen migrating south along with the odd Swallow. Larger numbers - and sometimes very large numbers - of migrant hirundines should be seen in September. Kingfishers, like Grey Wagtails, seem to have had a good breeding season and as many as five birds could be glimpsed on a visit to the reservoirs. With Lockwood out of bounds, few Yellow Wagtails were recorded with a single on the 21st and three on the 27th. 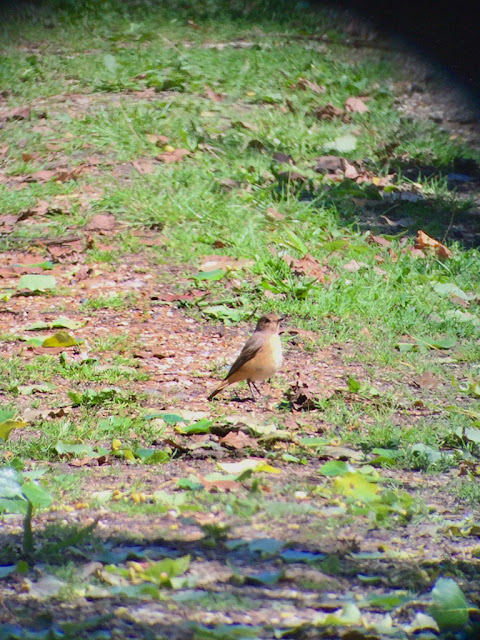 Common Redstart is barely annual at the reservoirs and is usually only seen by the finders. It was the same again with the juv/female on the path between No 2 and 3 on the 11th.  The only Whinchats seen were singles on the 10th and 25th while Wheatear numbers were low because of lack of visits to their favourite haunt of Lockwood. The first of the autumn was seen on the 15th with two on 20th and 24th,a single on the 29th and three on 31st. 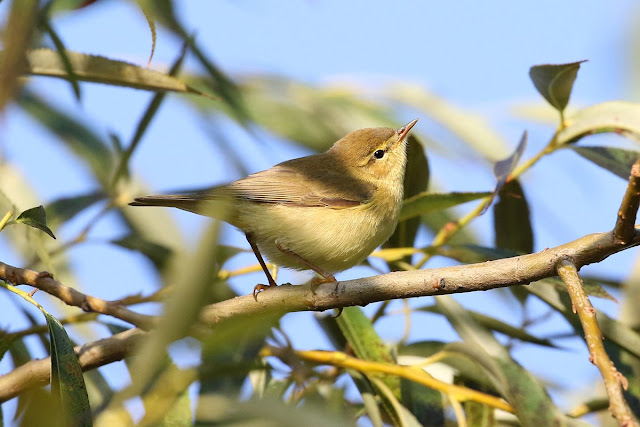 Cetti's Warblers, which had been silent and unrecorded over the summer, began to sing again by mid-month. Regular sightings of three young Sedge Warblers together in the West Warwick reed bed suggested they may have bred locally. The small numbers of Lesser Whitethroats and Garden Warblers seen  may also be local breeders which had moved in to feed on the rich berry crop. Willow Warblers were also recorded throughout the month, often with birds in song, with 20 recorded on the 31st the highest number seen. It seems to have been a good year for passage Spotted Flycatchers in London but it took a lot of hard work to find any on the reservoirs. The first was seen on the 16th, with two on the 20th, singles on the 24th and 30th & 31st. 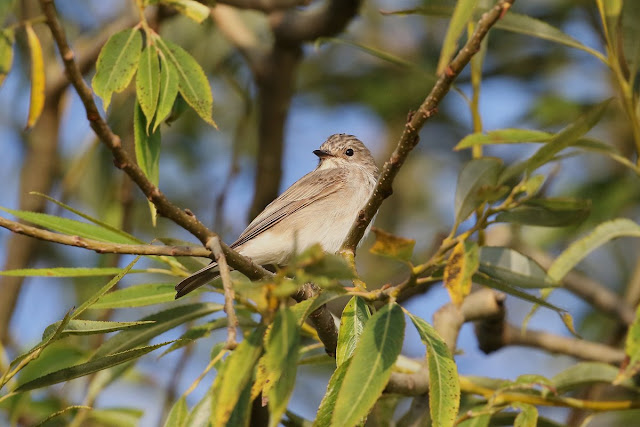 August is usually just a taster for the main autumn migration month of September at the reservoirs. With the track almost finished around Lockwood which should allow access at least to the east side and another two metres of water to be drained out of the reservoir, the next month could be very promising.

Posted by Walthamstow Birders at 22:24 No comments: