Last year on Walthamstow, the first Pied Flycatcher turned up on the 29th of April during the 5th Annual Walthamstow Patch Watch day (a female on the central path of the reservoirs). Then that was it for 2017.

Fast forward to Autumn 2018 and we’ve had a definite 5 (possibly 7 but could be same birds) all in the same spot - the front paddocks of the Lee Valley Riding Centre. 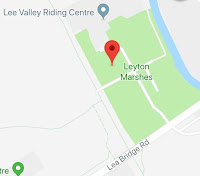 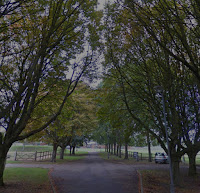 On the 13th of August, J-P Elmes, Matt Cunningham, Sue and Mark observed at least 3 separate birds on the front paddocks.

And, on the 3rd of September Mark and Lol observed at least 2 separate birds on the front paddocks.

Also on the southern side the patch were Garden Warbler and Willow Warbler in the WaterWorks Nature Reserve.

As was a juvenile rat.

On the marshes, a 4 raptor day was fun.

And the Whinchats have been daily on the Bomb Crater Field.

Also, on the reservoirs, the East Warwick island was inspected and it was quite disappointingly not scrape like (thanks to DW for pics). 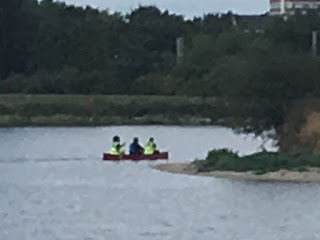 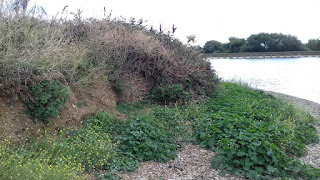 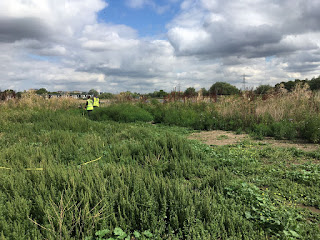 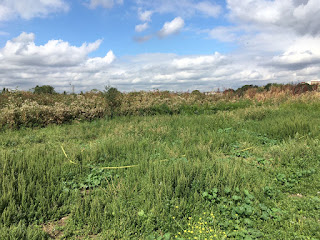 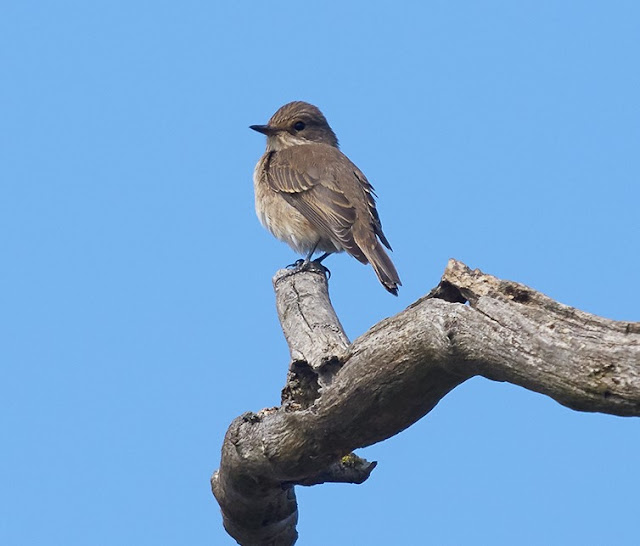 August - not for the first time - was a pretty hum-drum month on the reservoirs. But it finished on a high with the discovery of six Black Terns on the last day. Spotted Flycatcher, a regular passage migrant in August, was also added to the year list which now stands at 137. There was also late news of another breeding species with Shelduck raising young on the East Warwick island although, as usual, the young did not last long with so many big gulls around.

In contrast, both Little and Great Crested Grebes seem to have had a successful breeding season with family parties on many of the reservoirs during the month. The post-breeding flock of Tufted Duck reached 1,979, down on last year's figure of 2,400 but remains of national importance. Mid-month's wildfowl count also found 124 Pochard and 566 Coot.

The only record of Buzzard were three seen on the 18th and Hobby this summer remained scarce with one on the 22nd and then perhaps the same bird almost daily until the end of the month. But Peregrines could hardly been missed with at least two very noisy young on the pylons or frightening the ducks and gulls as they were taught to hunt by the parents - one of which was seen to grab a Gadwall. 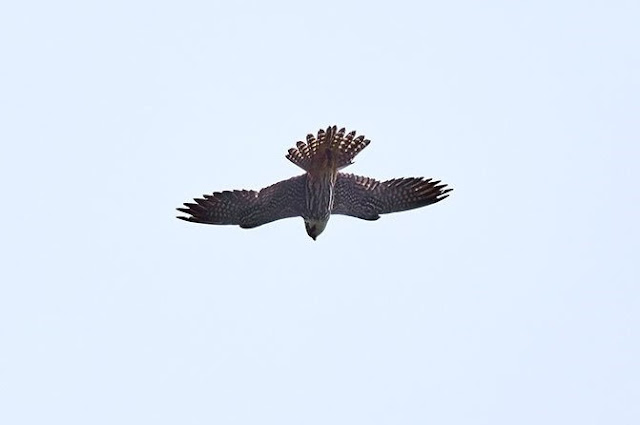 Wader passage was poor. There was only one Lapwing on  the 31st but for the second time this year, a large - by Walthamstow standards at least - flock of Black-tailed Godwits was seen when P&TR had 12 flying over No 5 on the 2nd. Single Dunlin were recorded on the 5th and 14th. Common Sandpiper numbers remained low with eight on the 1st the highest count while a Green Sandpiper made an appearance on the 3rd. The sole Greenshank was seen low over Lockwood mid-afternoon on the 31st by those watching the Black Terns, giving an indication of what slips through unnoticed.

Common Terns successfully fledged their two young and the family remained right through the month. They were joined by other adults and young, presumably from further up the valley, with a maximum of 16 being counted on the 17th. Six Black Terns, including one in near full summer  plumage, were found feeding over Lockwood late morning on the 31st and remained until mid-afternoon when five flew off high SW with the straggler following soon after.  The 19th saw the second Yellow-legged Gull of the autumn. 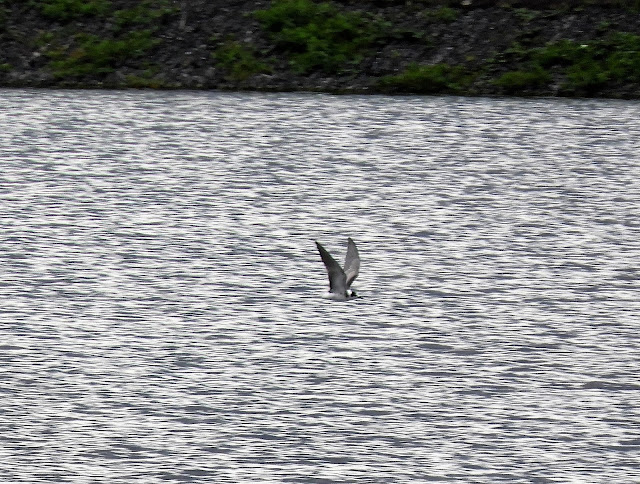 One of a very mobile flock of Black Terns over Lockwood

As seems to have been the case elsewhere, Swifts appeared to leave early this year. While in 2017, there were still around 30 over No 5 and the filter beds until the end of August, the local breeders had disappeared by the middle of the month, with eight on the 25th and five next day likely to be passage birds. But there were still plenty of House Martins from the colony at the Filter Beds and dozens of Sand Martins around until the end of the month with a handful of Swallow trickling through.

The odd Willow Warbler was also seen early in the month but passage started in earnest with 15 on 21st and 17 on 30th. Garden Warblers, for some reason, continued to be scarce this year on the reservoirs with just a single on 28th but small numbers of Whitethroat, Lesser Whitethroats, Reed Warblers and plenty of Blackcaps could be found in the tit flocks. Cetti's Warblers, which had been silent for the last few months, again started low-level singing towards the end of the month. 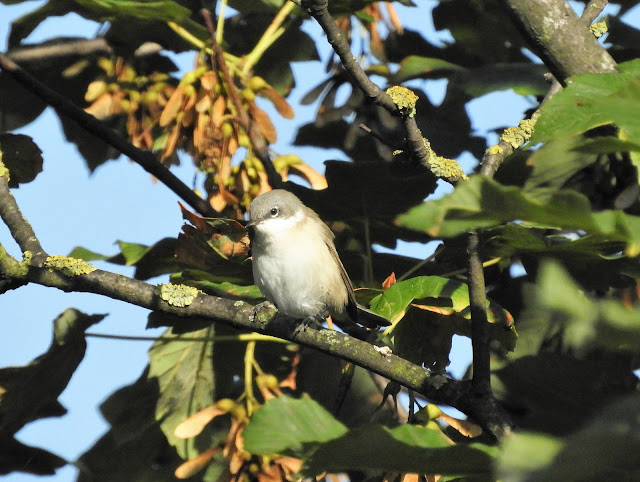 MM found 2018's first Spotted Flycatcher on the reservoirs on the 19th, with another or the same on 21st. This was the start of a nice run with three on the 24th, at least four on the 28th and next day, with one remaining until the 30th. There was no sign, however, of Pied Flycatchers which turned up at many sites across London this year including nearby Woodberry and Walthamstow Marsh and, to add insult to injury, in PL's garden just a few hundred yards from Lockwood.

Autumn Wheatear passage began on the 22nd - a week later than last year - when four were seen. The advance guard were followed by singles on the 24th, 27th, 28th and three on the 31st. Whinchat are much more common on the marsh to the south but we had singles on the 22nd and 27th. 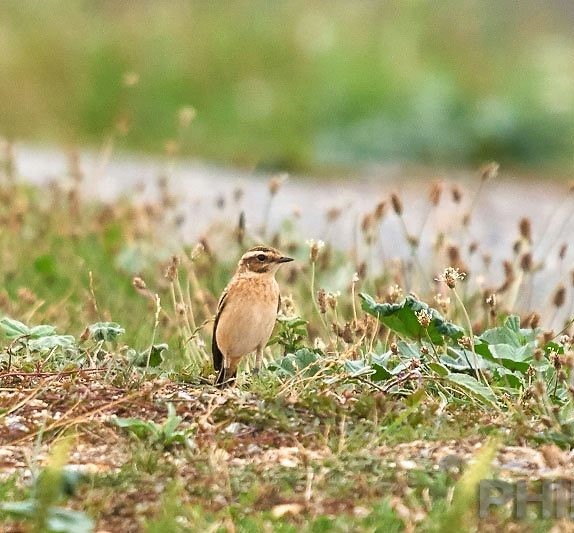 Like Spotted Flycatchers, Yellow Wagtails seemed slightly more frequent this year with two on the 15th & 17th and three on the 22nd and a single on the 29th. With the weeds at the top of East Warwick looking even more inviting than last year, a flock of 30 Linnets was  a good sign for the winter.


Posted by Walthamstow Birders at 20:26 No comments: