First for the reservoirs, second for London

You might have thought that Great Blacked Backed Gull was a regular breeder in London but it turns out it very definitely isn't. In fact the pair which have now fledged two young on the island on No 5 are not just the first ever to nest at the reservoirs but possibly only the second to be successful in the capital. Andrew Self's The Birds of London only has one definite breeding success before on the Isle of Dogs in 2010 and Pete L, who as the Editor of the LBR should know, says there have been none since. We have all seen the pair sitting on the island from time to time over the last few weeks but, as they kept disappearing, no one was certain what was going on. But Pete finally saw an adult feeding two young yesterday and found them again today on the easterly island and the water today. (Apologies for the confusion and my cock-up in posting the wrong pic.)


There was good news as well on the tern front as my pessimism about the chances of any surviving the nearby gull colony on East Warwick were proved overdone. We found one fledged young on the raft which joined its parents for a quick fish on West Warwick. It was still around when Pete phoned to say he had another young bird with adult on the bottom of High Maynard. So with the four birds still on the raft on Lockwood, it looks as if it might have been a reasonably successful breeding season. Whether they will survive a GBBG colony is something we will find out. 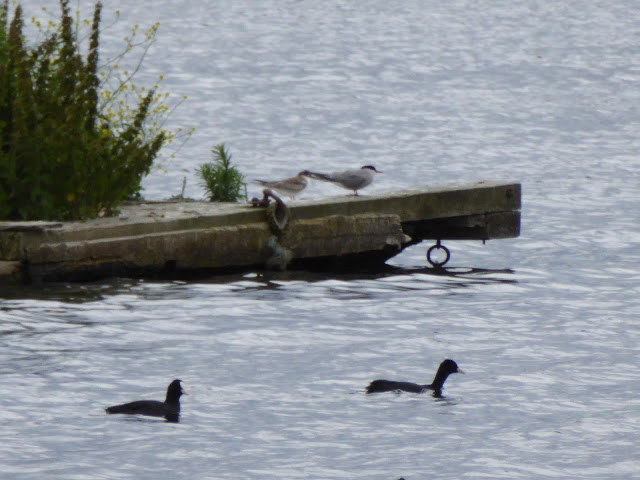 High Maynard also held a roosting Red-Crested Pochard which I presumed was a female but it woke up long enough for Pete to see it was an eclipse male with a red bill. Otherwise just a few Common Sandpipers scattered around the reservoirs and the usual two Peregrines. Long sits/sleeps at likely warbler spots produced absolutely nowt. 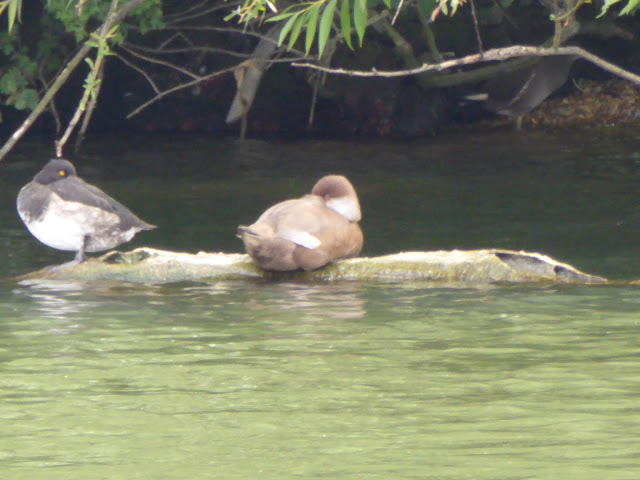 DB @porthkillier
*Oddly enough there was a dead adult GBBG on the side of No 4 by the anglers' hut and what looked to me to be another half-submerged dead bird at the bottom of the nesting island. I did see one adult fly off so the young birds are not orphans yet.
Posted by Walthamstow Birders at 20:34 3 comments:

My lack of posts over the last couple of months is not because I have abandoned the reservoirs but simply because the regular visits have given me very little to write about. In fact, apart from the Med Gulls which I have failed to see, it has been what you expect for the summer. When Thames Water drew the water down on Lockwood earlier this month to produce a very good edge, we did collectively find six species of waders - LRP, Common Sand, Dunlin, Greenshank, Redshank and six over-flying Whimbrel - to prove the 'drain it and they will come' adage. But once the water levels returned to normal after a week so did the waders which have, by and large, been limited to Common Sandpipers. Even when I found a long grass snake skin on the side of Lockwood, I discovered Jamie had already seen it. 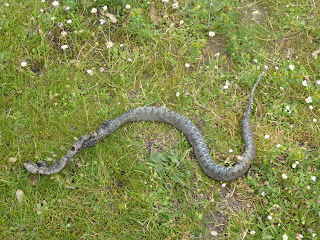 Today's visit was similarly lacklustre except for finding at least four well-grown young Common Terns on the raft on Lockwood. Given the way you now get mobbed by the anxious parents just for walking on the bank, they must have a good chance of surviving the gulls. 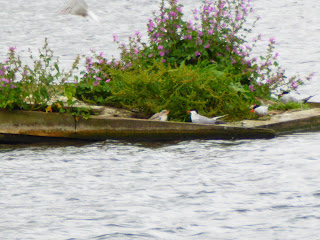 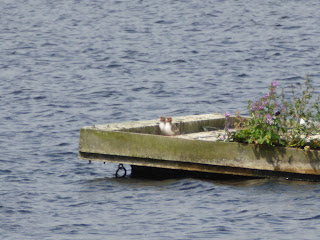 I can't remember any terns breeding on Lockwood last year, although there was a fair bit of displaying and pair bonding late into the season, and the one young I saw peeping out of the weeds on the raft on East Warwick, unsurprisingly, did not last long. According to NB who looked today, I think it is the same story this year. So let's keep our fingers crossed.

I counted at least six Common Sands on Lockwood and there was another on the mud islands which have formed in the over-flow channel which are certainly worth scanning as the autumn progresses. And with a young Willow Warbler in the tit flock on the central path, it is definitely - thank god - on its way.....

Posted by Walthamstow Birders at 19:42 No comments:

In the excitement over last weeks Rosefinch, I neglected to broadcast my report of 3 Mediterranean Gulls over the marsh. 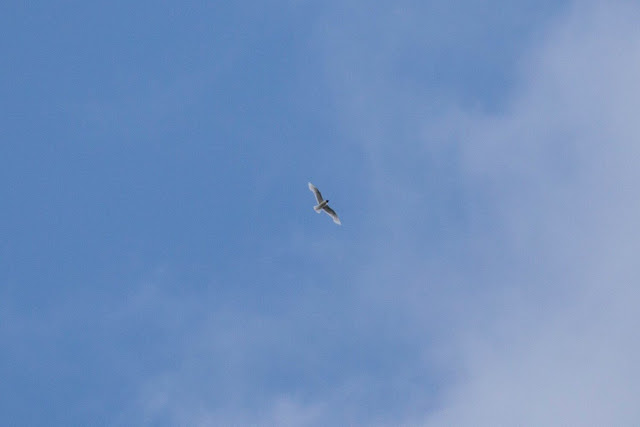 On sunday the 5th ten minutes before i first heard the finch, a flock of c40 Black-headed gulls were circling high above, in amongst the calls of the Black heads I heard the more nasal 'posh' sounding call of Med gull,  Scanning the flock i picked out an adult and second summer.  Most birds in the flock, black heads included, were moulting inner primaries. 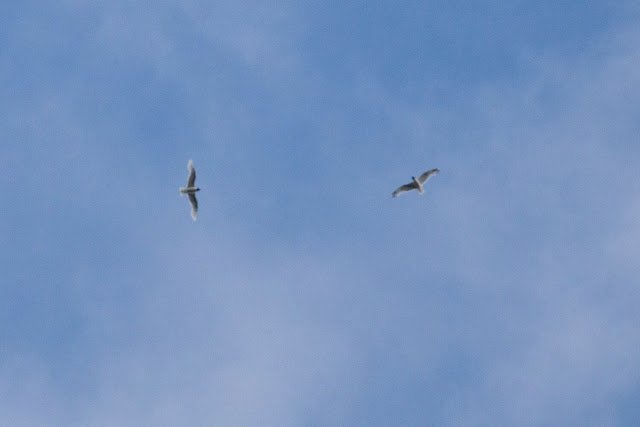 Looking at the images later on, i found a first summer bird in there too. Apologies for bad photos, the birds were high up. 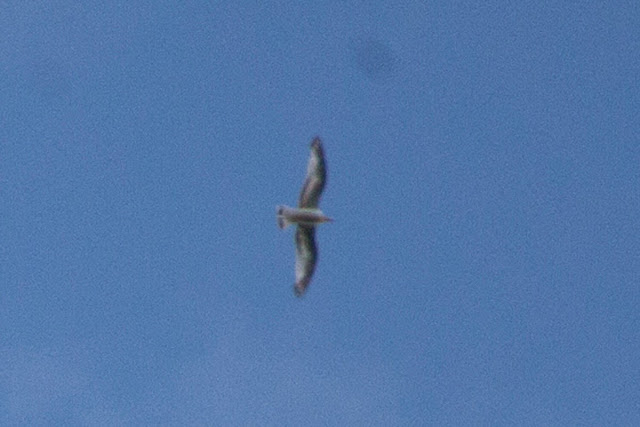 I couldn't see any Juvs, so perhaps non and failed breeders relocating. July is a time for med gull movement along the south coast so i imagine the thames estuary birds move about now too.

Even though they breed in their hundreds in the mouth of the Thames, Med gull is a difficult bird to see on the patch. A few years ago a had a second winter bird early November fly over the bomb crater field and I've struggled to see one since. Both Paul and Davey L have seen an adult since these birds, but i imagine thats a different bird to the adult in this flock as they remained high up and drifted NE.

@jarpartridge
Posted by Walthamstow Birders at 13:56 No comments:

On approaching the underpass along the main path of Walthamstow Marsh I heard a distant; sweet and bright dysllabic whistle. Then the repeating of a section of song, four syllables, unfamilar but defiantly totally arresting.  Honestly, my thinking was Rosefinch. But having only heard one sing in the flesh once before i was reluctant to blast out a hasty tweet. I tried to record the bird, which seemed to be mobile, sent the recording to Paul, Stu and friend Laurence P, saying "This sounds like a Rosefinch", then " gimme a call Paul, this thing sounds good..."

My video efforts were poor and not very audible. There is little high ground and i couldnt see the bird at all. I was cautious as there has been an escaped Canary type thing on Hackney Marshes a week or so ago and I didn't want to mess this up.

Eventually Paul arrived and the bird had been silent for 15 mins.  Then it called clearly a 5 syllable undulating song. Paul said 'Thats got to be Rosefinch' , I scanned and saw the bird distantly perched up in a Hawthorn.. "ITS A RED ONE!', 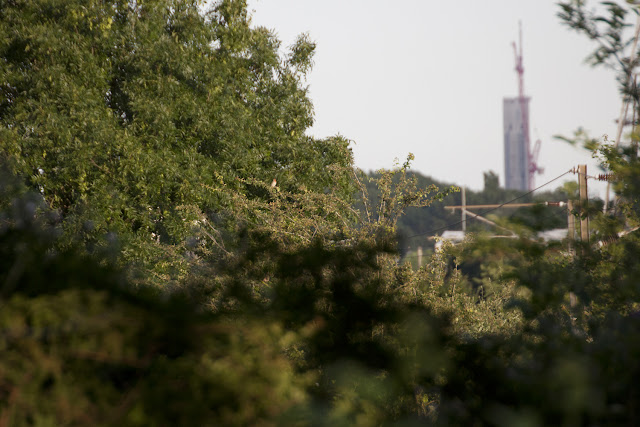 The appropriate texts and calls to locals as well as RBA etc were made and people began to arrive. 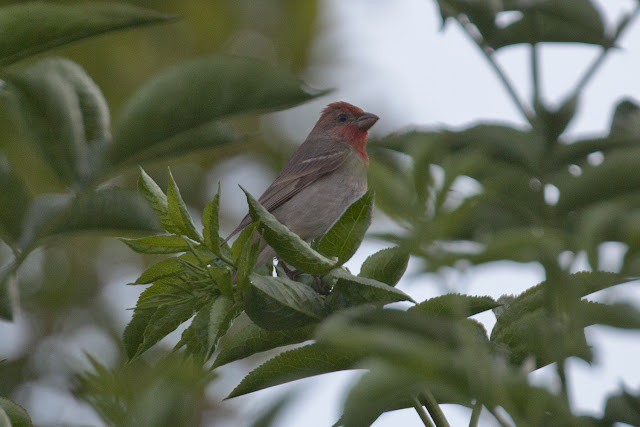 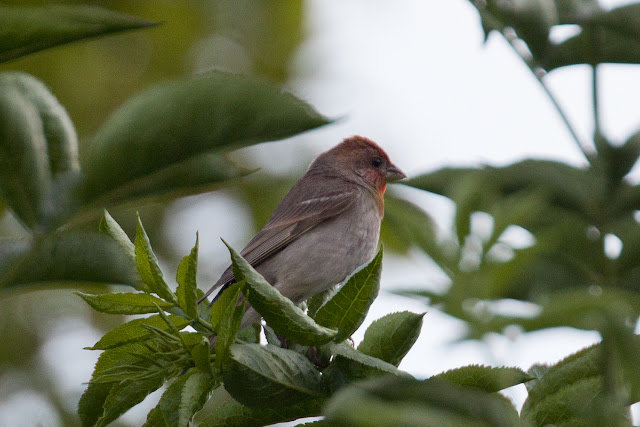 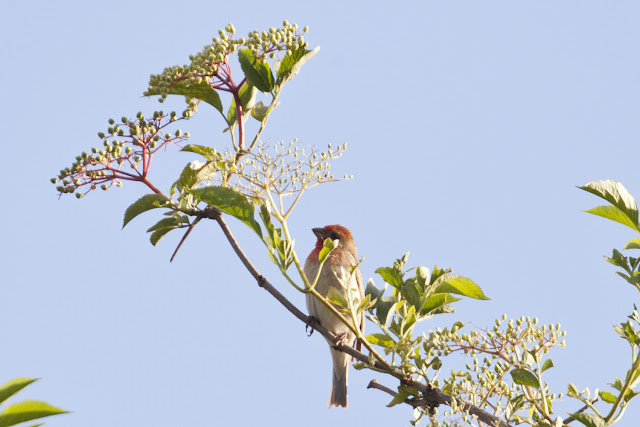 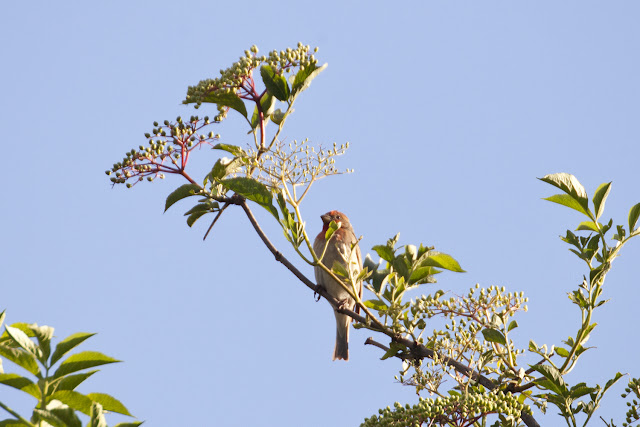 It Seems to be a First Summer Male, the median coverts are white- tipped rather than pinkish red and the The red tones aren't hugely extensive. But a beautiful bird and an interesting time of year to see this species in Britain.

Many people seem to have come to see, and hear it and I'm very pleased to have eventually found a (much more) twitchable bird on the patch.

Posted by Walthamstow Birders at 21:23 No comments: