Hopes of catching up with Jonathan's Green Sandpiper yesterday paid off when two flew up briefly from the overflow channel and landed at the top end of High Maynard - my first for the year on the reservoirs on my last visit of 2014. A Common Sandpiper did the same trick which means that I am going to have to alter my usual route and walk round the east side of High Maynard in future. Thirty-odd Teal were around the islands but I thought I had dipped out on Goosander until three flew north over Lockwood and clearly landed on Banbury. Not sure where they are coming from but don't think it is the reservoirs themselves. Two Chiffchaffs enjoyed the sunshine on the west side of Lockwood. There was no sign of the Scaup again on No 4 but the log book said it had appeared on Lockwood at 4pm yesterday so I went back to make sure I had not missed it. I hadn't but did find a pair of Goldeneye which hid from me first time round. So it is clearly still in the area but now more mobile as the Prof predicted.  Just in case anyone intended to make an early start on the 2015 Year List. I was told the reservoirs are closed on New Year's Day.
DB  @porthkillier
Posted by Walthamstow Birders at 16:39 1 comment:

Only two days left of 2014, so I went to the WaterWorks hoping that there would be a Bittern waiting there for someone with a camera. Sadly, there wasn’t.

But there was a Cetti’s Warbler mooching about (on the ‘big boring bed’ that has recently developed into a ‘potentially quite interesting bed’), letting me get glances of him through my bins. Of course, he was adamant that he was not going to be photographed. I respect that. I think if I was a bird (I do think about that), I could be a Cetti’s. I bet they don’t have a Facebook account either.

On my way out of the WaterWorks, a flock of around twenty Fieldfare flew over towards the paddocks, so I couldn’t resist a wee peak. It was thrush central! There were scatterings of Redwings, Fieldfares, Mistle Thrushs and Blackbirds everywhere.

I tried to snap some, but my fingers felt like they were experiencing the early onset of frostbite and I failed miserably.

Strolling in the Sunshine

A gentle stroll around the reservoirs on a lovely still, sunny but crisp day.Twenty six Fieldfare which flew over the north of Lockwood in two flocks were the only signs of the freezing weather to the north. Two pair of Goosander came off the top of High Maynard where JN also had a Green Sandpiper. A Common Sandpiper was on No 5 while we also had six Goldeneye and six Chiffchaffs scattered around the reservoirs. But the Scaup, which was definitely still on No 4 yesterday, was missing on the two occasions we looked.
JN DB
Posted by Walthamstow Birders at 21:31 No comments: 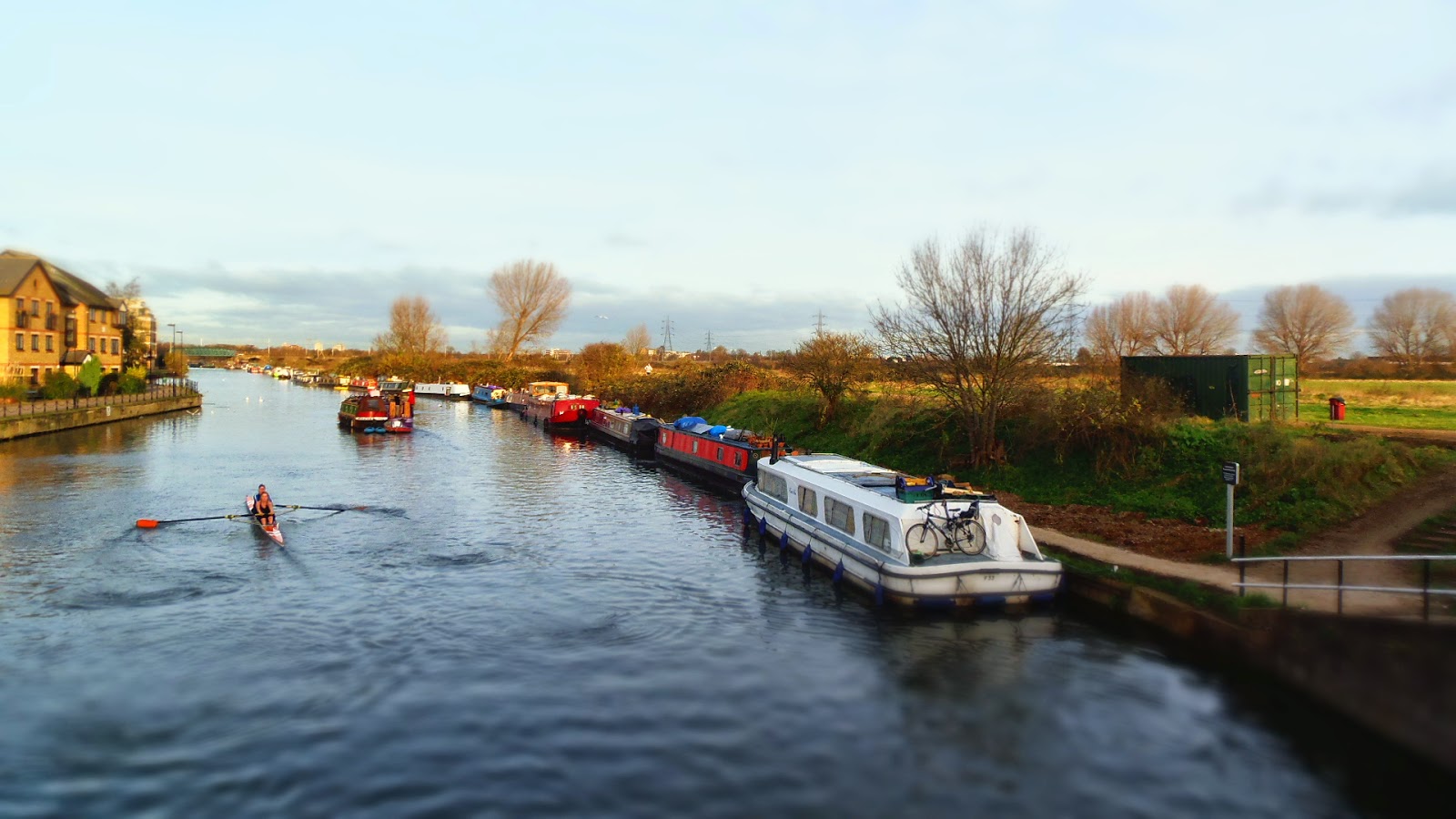 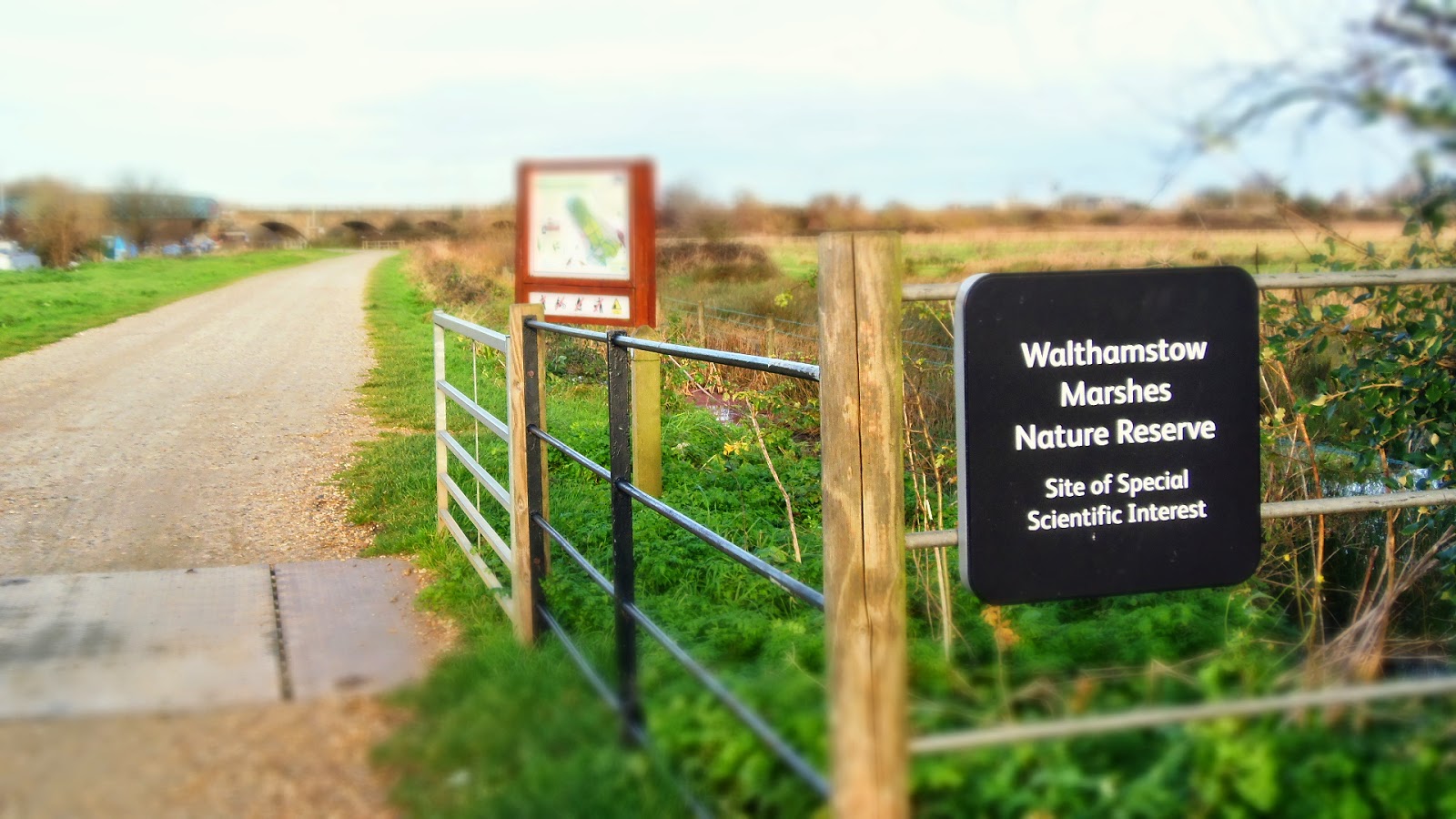 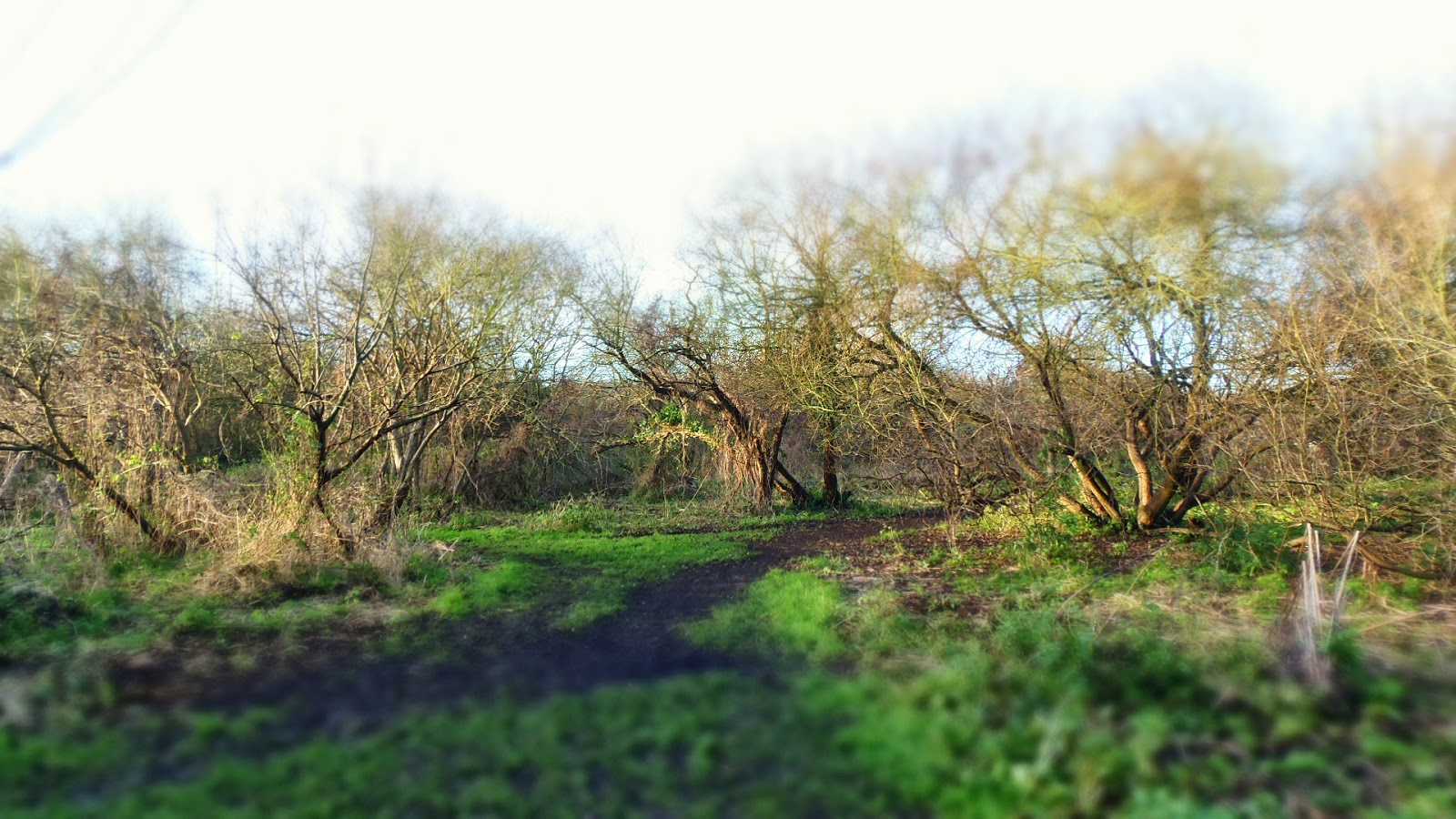 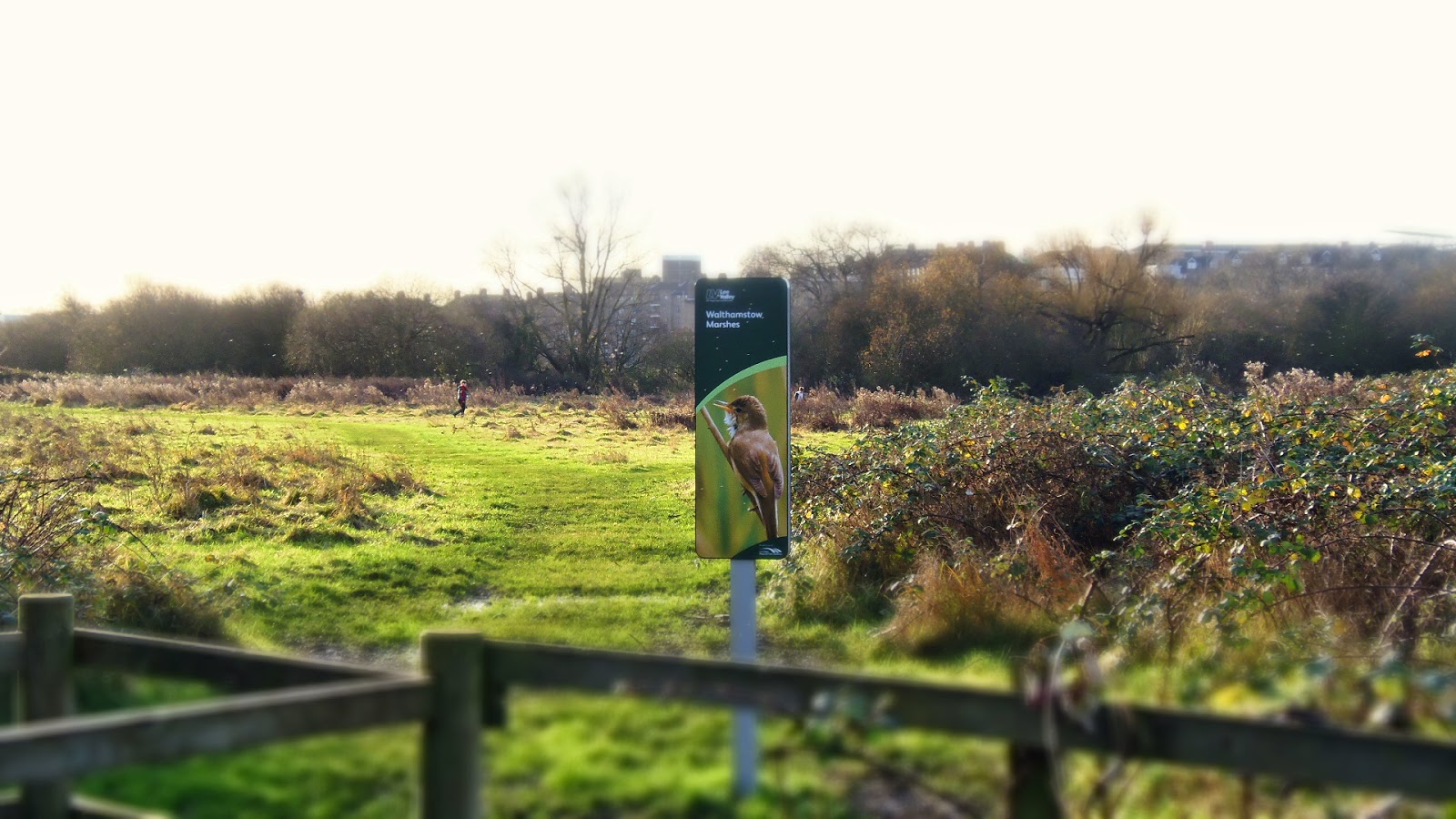 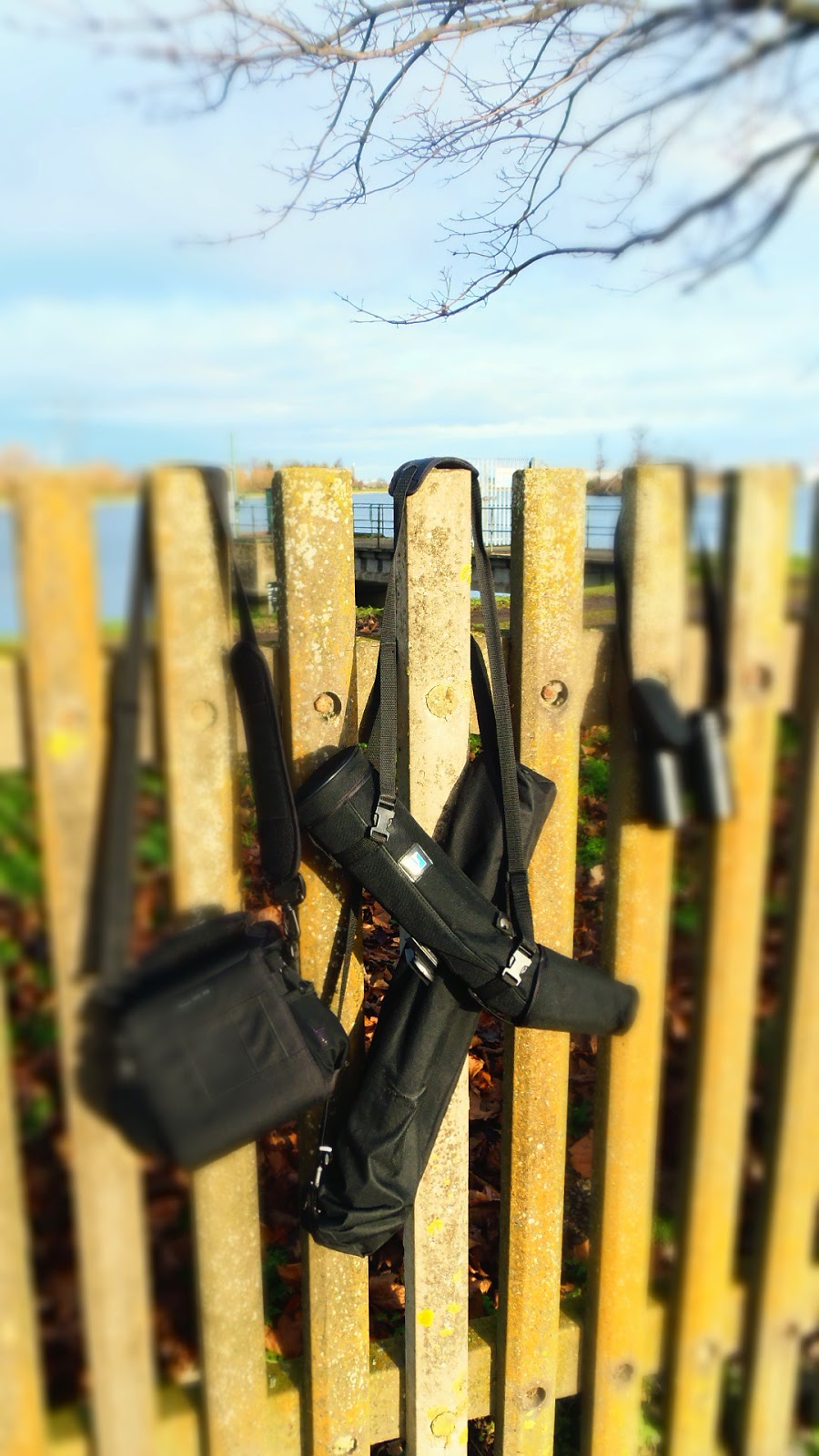 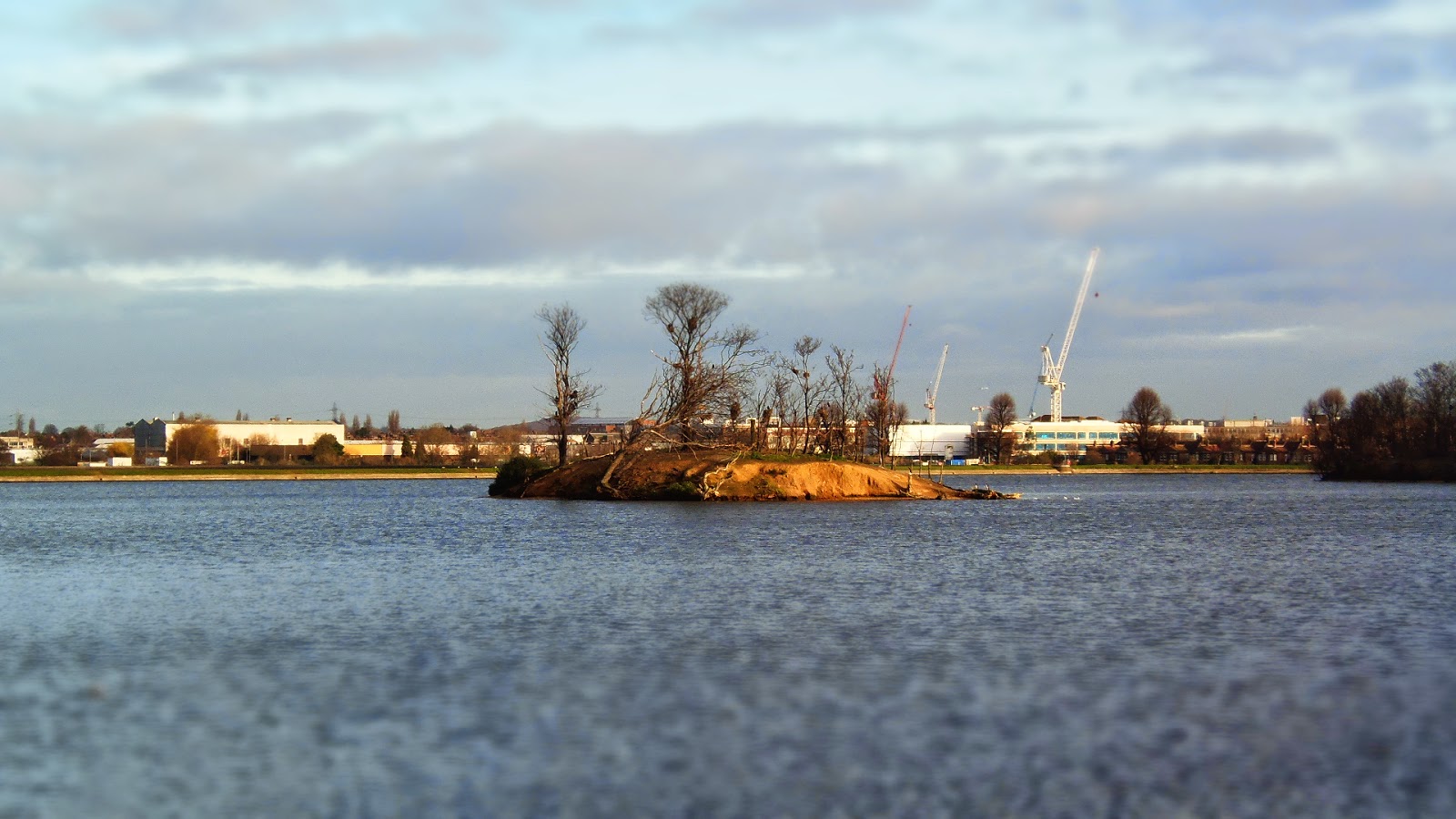 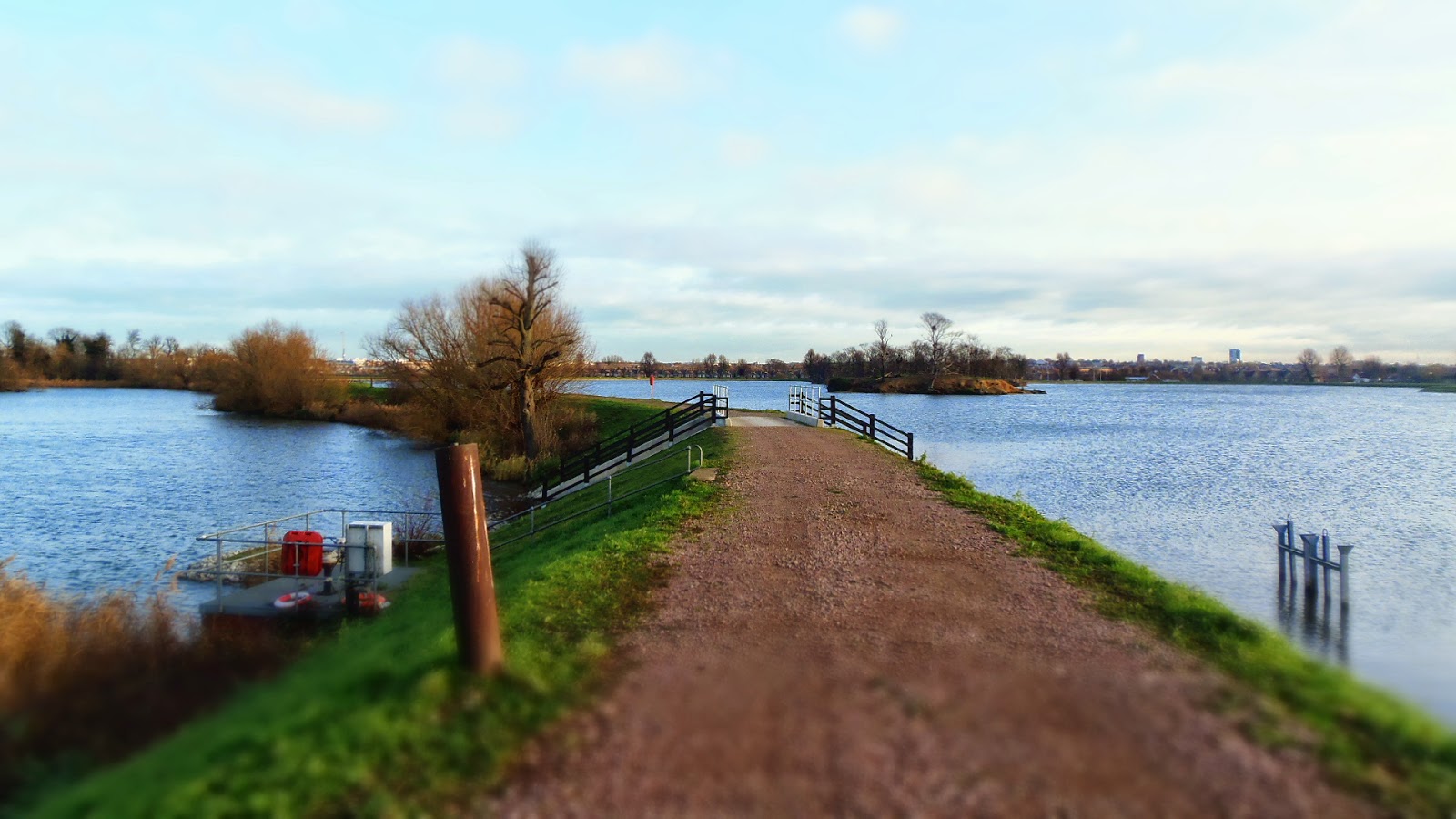 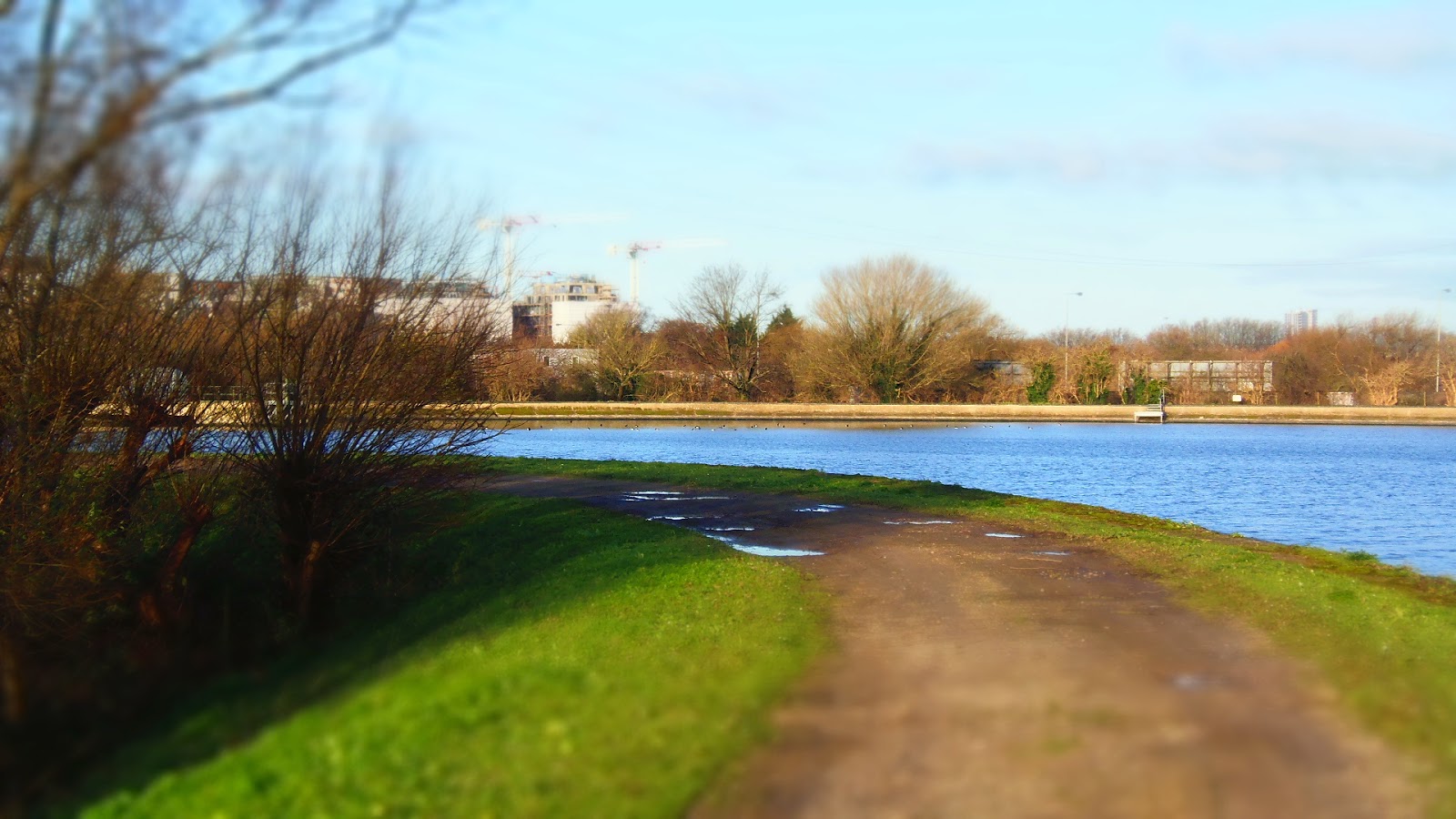 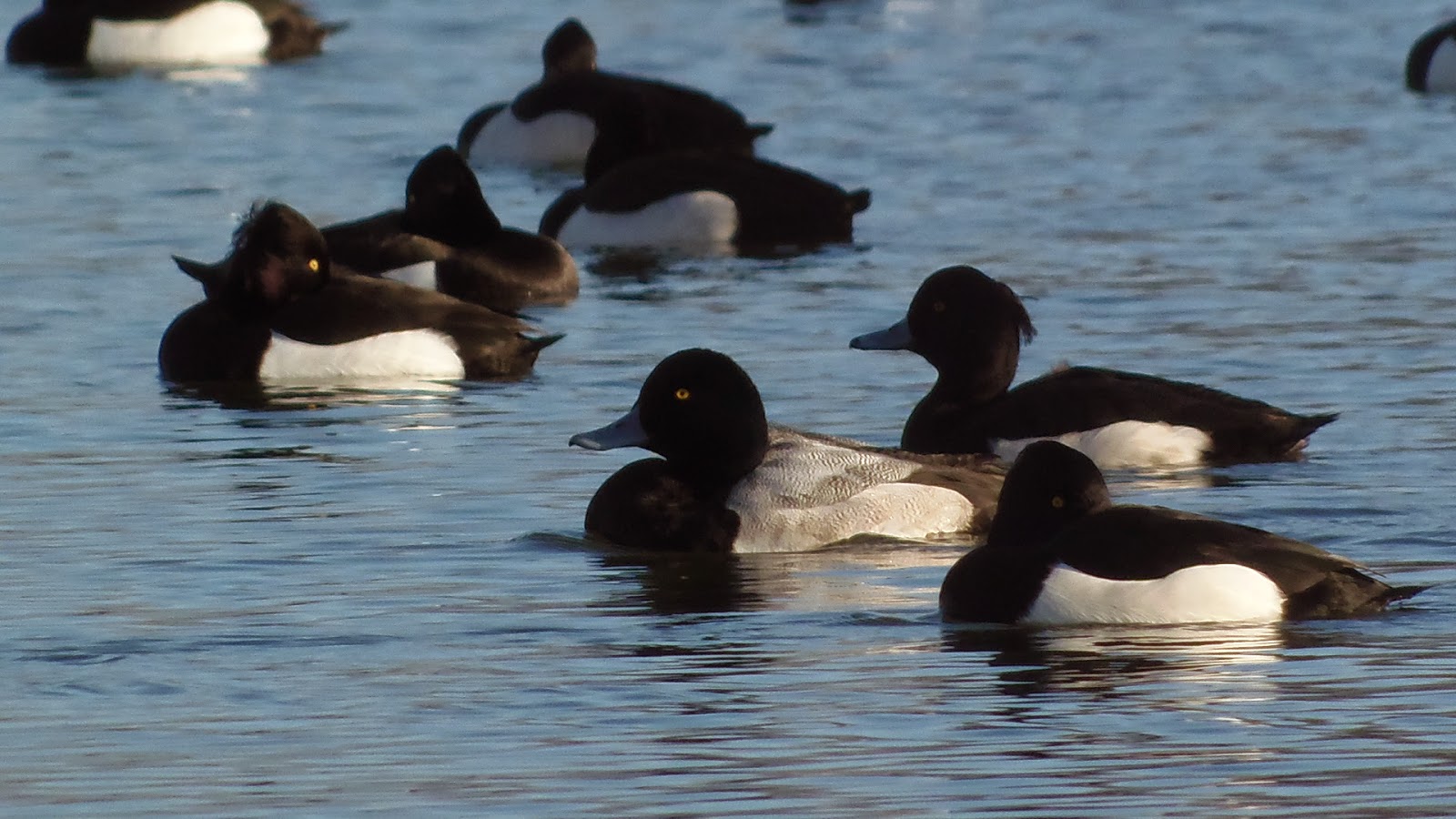 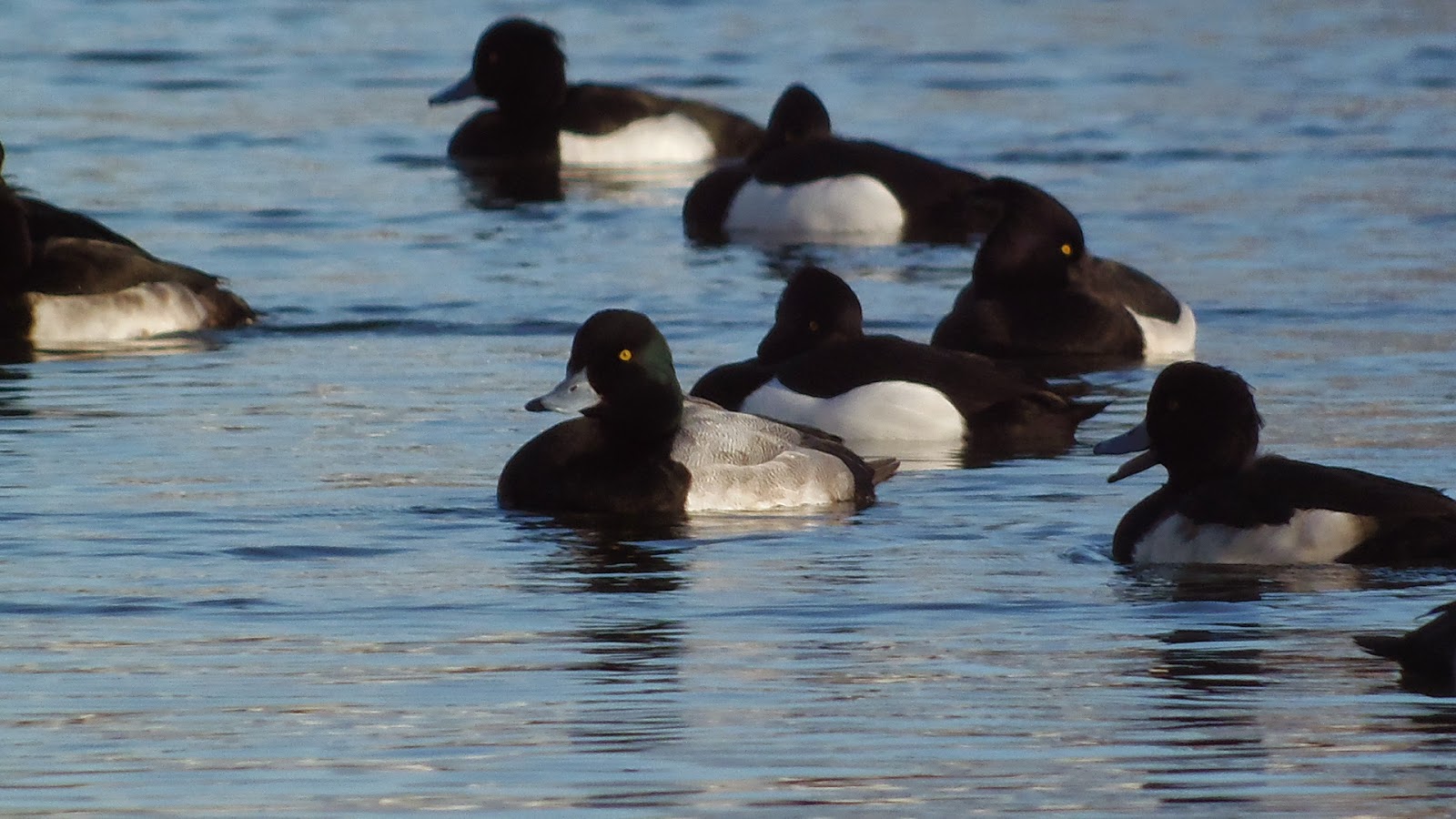 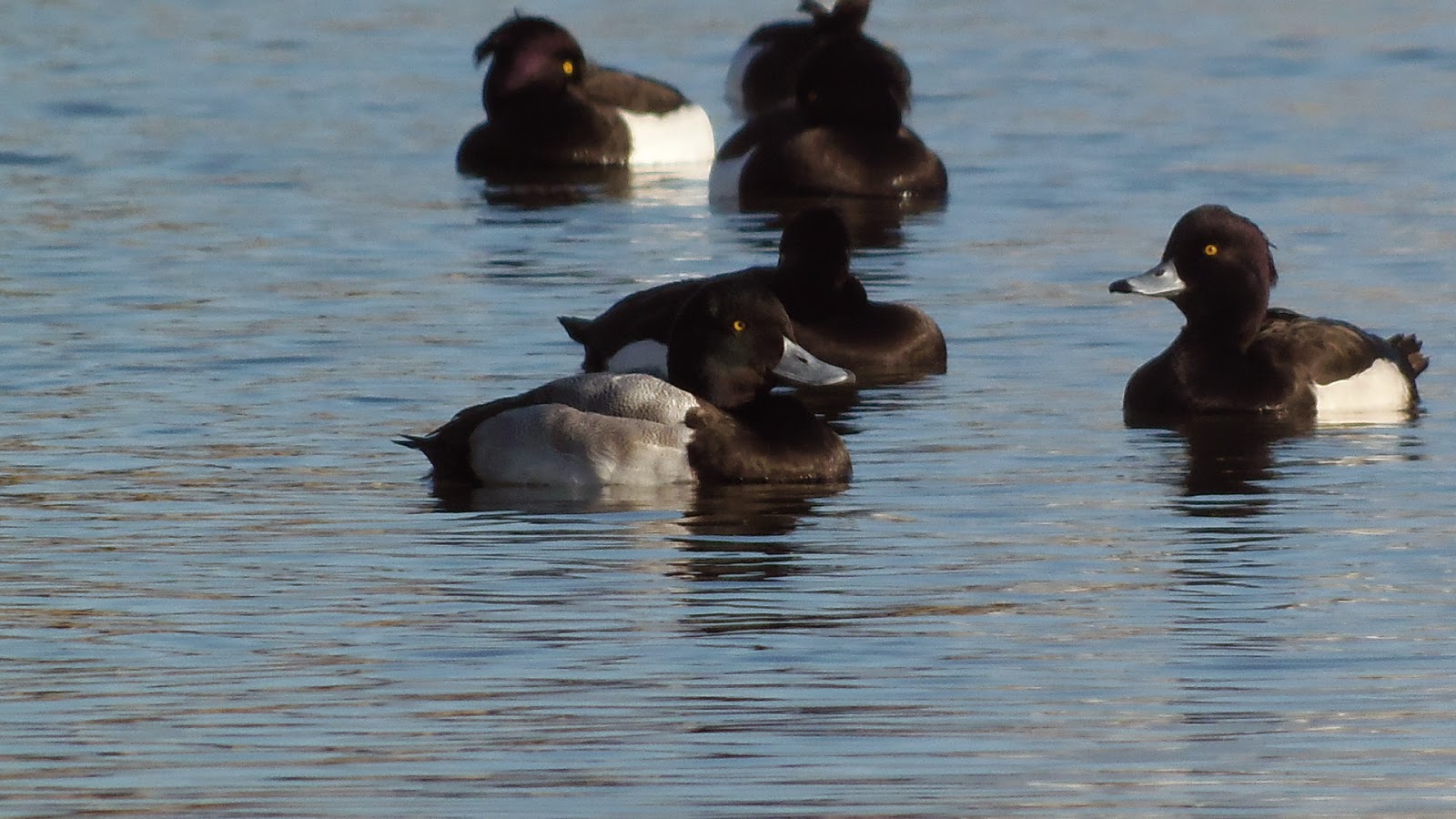 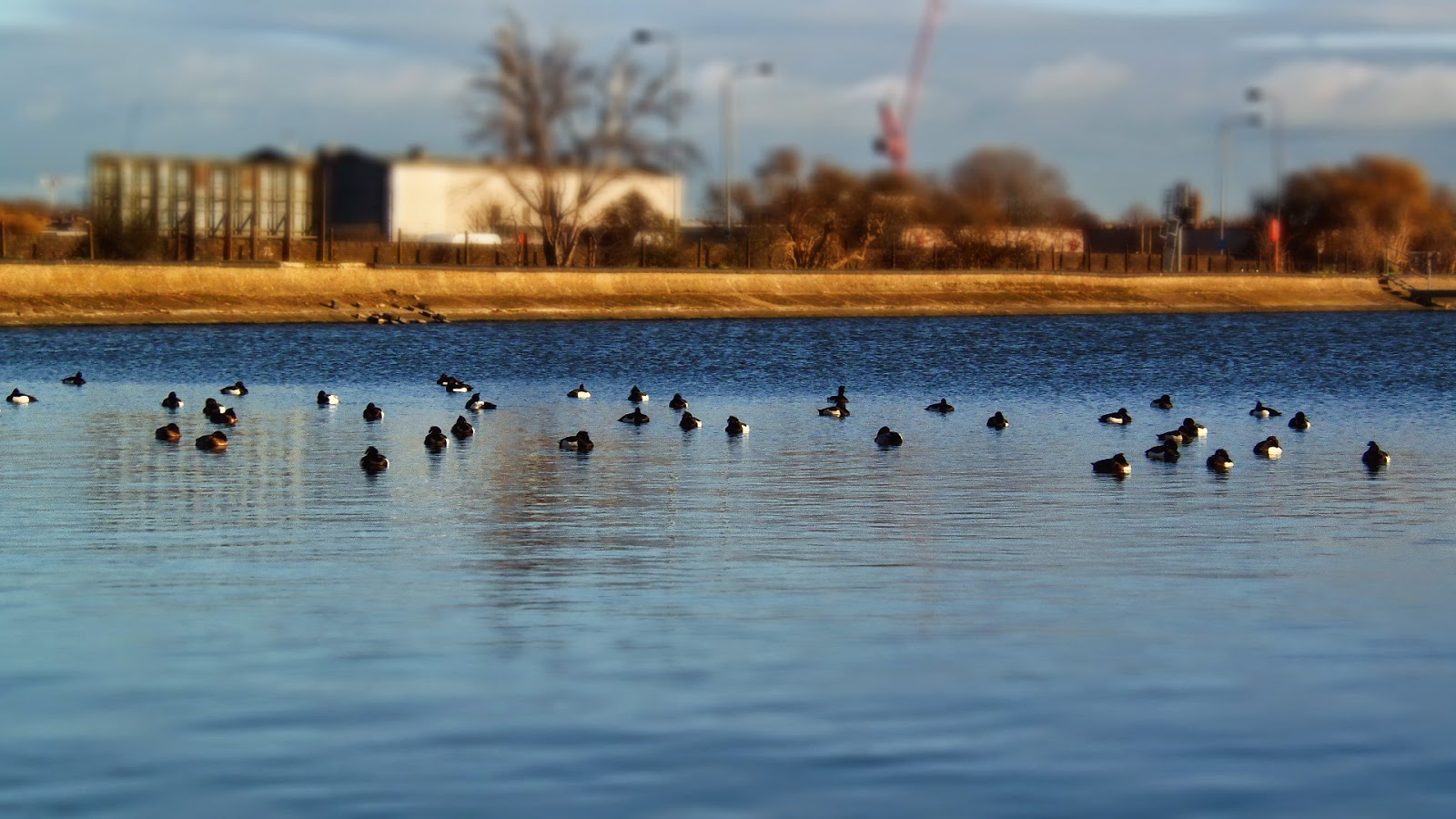 The drake Scaup remains on No 4 and is attracting a steady flow of visitors. It is even tamer now than earlier in the week and does not bother waking up when people approach. Two Goldeneye were on No 5 where there were 16 Shelduck on the islands. Four Meadow Pipits - the first I have seen for a few weeks on the reservoirs - flew out of the field at the east end. A Stonechat was on East Warwick and Paul and I had another on the marsh from the bottom of West Warwick when we were watching the five feeding Little Egrets that JN had reported from the train. Our planned walk round Lockwood to look for the Med Gull from yesterday was aborted when we met JP and Jonathan who said there was no sign. They had three more Goldeneye with a Common Sand on High Maynard. A brief stop at the Filter Beds also failed to connect with the Med Gull but we did see - and Paul heard - three Goldcrests in the fir trees. DB @porthkillier
Posted by Walthamstow Birders at 23:51 No comments:

A brief account of today’s patch excursion. Having done the reservoirs recently I thought I should do the Waterworks NR and then check out the magic roundabout.
A good start was the Peregrine, a probable male, launching attacks on the Ring-necked Parakeets from the pylon on the South edge of the reserve; needless to say I never got lined up in time for a shot. Didn’t see whether it got one but the squawking told me that they were clearly not happy to be Falcon fodder. Just after that a Sparrowhawk zipped through the beds; I obviously arrived at breakfast time. 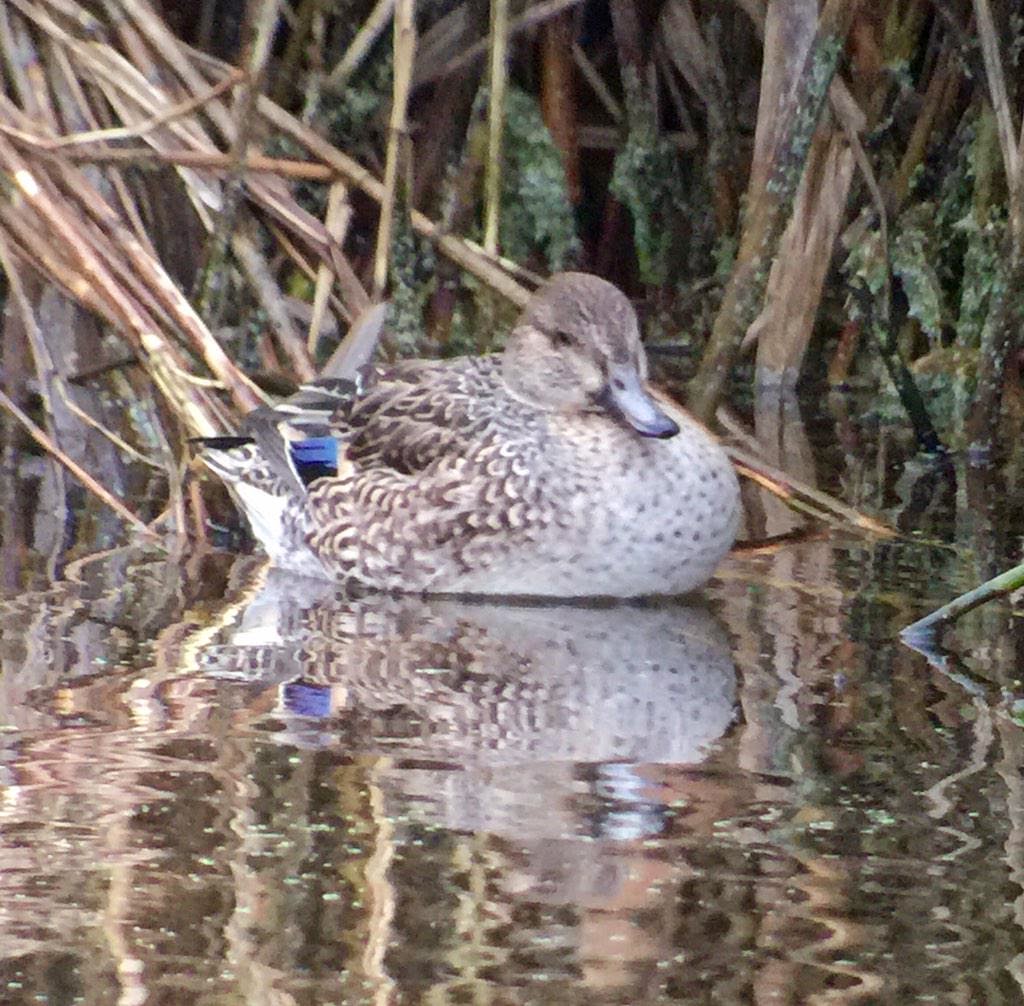 The Duck are all looking spiffy now they have finished eclipse and quite a few male Teal were cavorting around, the females looked a bit bored. The water level is way up in second bed on the left, way too much really but it is better than bone dry so we will have to see what turns up in there, apart from giant ceramic Fish that is. 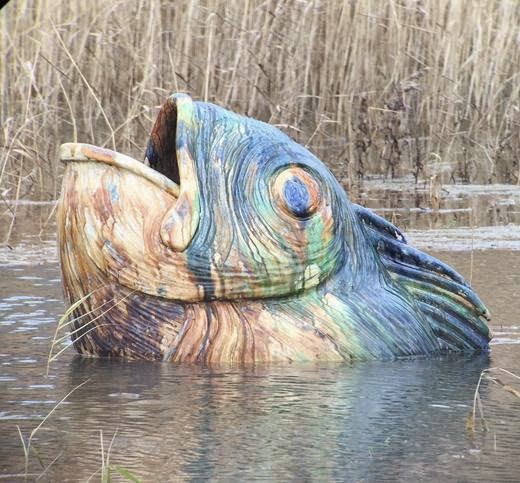 The best bed is usually the third bed on the left (I really must memorise the numbers!) but is getting quite encroached by Reeds, today it held....a Moorhen.
I heard at least one Cetti’s Warbler and one Water Rail, possibly two of each though as usual no sightings.
I checked the river down in the South-east corner of the Pitch and Putt but the level was very high and, apart from seven Gadwall, didn’t offer up much. I also checked a lot of the Trees along the Southern edge by the Lea in case there were any roosting Little Owls, the lack of leaves made it easier than for the last six months but the lack of Owls was a disappointment although not a surprise.
A calling Meadow Pipit became two, then a small flock and finally 30. One had a white forehead and throat. There is obviously scope for something good-ish to turn up in the now weedy and overgrown Pitch and Putt, there were a few Goldfinch and three Greenfinch blogging about too. 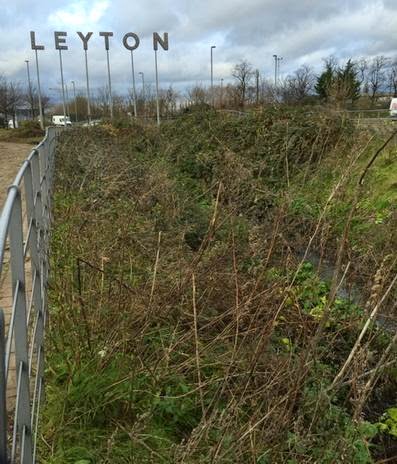 It was now time to pop down to the traffic island at the Southern end of Orient Way and see if I could get a new late date for Reed Warbler, as it turns out I could and did. According to JWD, who I met down there, this is the latest recorded Reed Warbler ever in Britain. It has generated a bit of interest since I found it (or more accurately strung it as one of Stuarts Whitethroats) and there is an i.d. thread running on Birdforums, with some trying to talk it up into a Caspian Reed Warbler (spp. fuscus) which it potentially could be, however even trapped birds have failed to make the grade so don’t hold your breath on that one.
A male Stonechat, Grey Wagtails, Song Thrush and lots of Brown Rats made up a good supporting cast but no sign of the often present Water Rail or the formerly present (seen up to the 15th Dec but not since the scrubby stuff has been manicured) Whitethroats.


@birdingprof
Posted by Walthamstow Birders at 16:49 No comments:

Arrived to meet John W walking away from No 4 who told me he'd just had the drake Scaup - asleep as usual - but when he returned to photograph it, the bird had disappeared. We had another look but there was no sign. He continued round the southern reservoirs and I went across the road.

It was slow going with just 22 Teal on High Maynard until I got to the north end of Lockwood where the Scaup was just off the east bank with a few Tufties. It spent most of the time with its bill tucked away but did wake long enough to swim past me. Apart from two Goldeneye (Adam W had four in the afternoon) and a Sparrowhawk soaring, the only other record of any note were 25 noisy Magpies together in the trees in the top field.

The Scaup was still there when I looked across the reservoir from the west side but, by the time I got to the south end, I couldn't see it. Sure enough, I found it again back on No 4. Which, considering it spends its entire time asleep, is a pretty neat trick. It was still there in the late afternoon.

DB @porthkillier      * with thanks to the Prof for the headline ....if thanks is the right word
Posted by Walthamstow Birders at 20:02 2 comments:

When Jamie and I worked the reservoirs, hard, last Thursday, one of the species foremost in my mind was Scaup. Almost annual on the patch and absent so far this year, weather turning cold, Wildfowl moving, there had to be a chance didn’t there? It turned out the chance was fat (seems to be an obsession with weight on this blog!).
Fast forward to this morning and I get a text from Pete L:
‘Poss male Scaup on No 4 Res wjith tufted ducks’
followed shortly by:
‘On way home now. Head and plumage of ‘scaup’ lonk ok for pure bred bird. Only one brief view of bill, thats’ what needs a check’
I sort of got his driftJ
﻿

I wasn’t free till 13:00 but got down there straight away. The bird was in the North-west corner and quite close to the bank. Mostly dozing, though with one eye on me, it certainly looked the part but the crucial thing was the nail. Long story short it was ok. A personal and patch year tick to boot. The bird does like to keep its head tucked in though! So here’s the incontrovertible proof.
Pete also had two Common Sandpipers together on No.5 and yesterday a drake Goosander on the Banbury which might be viewable from Sandpiper Close E17. These Goosander are very skittish on the patch so the Banbury being fairly ‘Eintritt verboten’ might mean it stays put awhile.
I knew I should not have said ‘....but it’s nearly over’ too soon as with the Scaup and yesterdays Merlin (Stuart F had one, a probable female, zooming over the Jubilee Park towards Hackney Marshes) that puts the patch on 137 for the year.


Thanks to Pete and Stuart.


PW @birdingprof
Posted by Walthamstow Birders at 15:14 No comments:

As David B has already mentioned 'The exhortation for not departing prematurely until a hormonally challenged person of the feminine gender in a terpsichorean situation has performed’ somewhere downthread, (never-leave-until-fat-lady-sings. ) I thought it might not be a bad point to present the cumulative patch yearlist. It's not beyond the realms of possibility that we might add one or two before 2015 arrives but I suspect it's pretty much a wrap. 135 is not one of our best showings but it's not too shabby either.


Posted by Walthamstow Birders at 14:37 No comments: