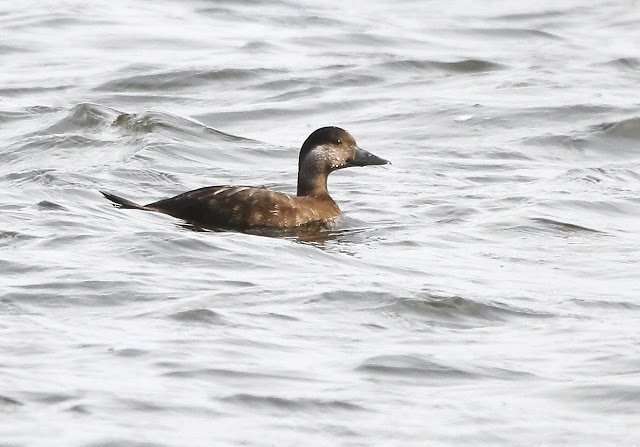 One of three Scoter recorded in October pic @Chris_Farthing
Another good month with the highlight being the long-awaited and long-overdue first Yellow-browed Warbler for the reservoirs even if it rather spoilt the historic occasion by keeping resolutely out of sight. October also brought two more excellent additions to the year list in Kittiwake and Crossbill - both extremely rare - as well the more regular Rock Pipit and Short-eared Owl. There were also  several records of fly-over Siskins and Redpoll which, like Crossbill, were seen in unusual numbers in London this autumn as well as late dates for summer migrants. The five additions take the annual total so far to 144 which is not only 13 above last year's figure but also 2018 & 2017's totals. 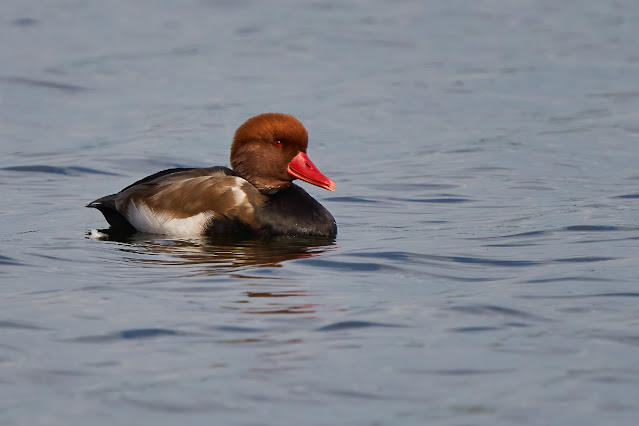 Ducks continued their good autumn showing. The young Shelduck spent the entire month lounging around the southern end of No 3. Individual Wigeon remained from the September influx until the 17th with ten recorded on the 14th. The second Red-crested Pochard of the year was a smart drake on the 5th. News came through of the origin of another Tufted Duck with a nasal saddle found by CF at the end of September. The saddle does not seem to cause any problems as the drake is at least seven years old having been first caught at Saint-Philbert-de-Grand-Lieu near Nantes in western France in November 2013. With a peak count of 1197 Tufted Ducks in early October, it was not short of company... 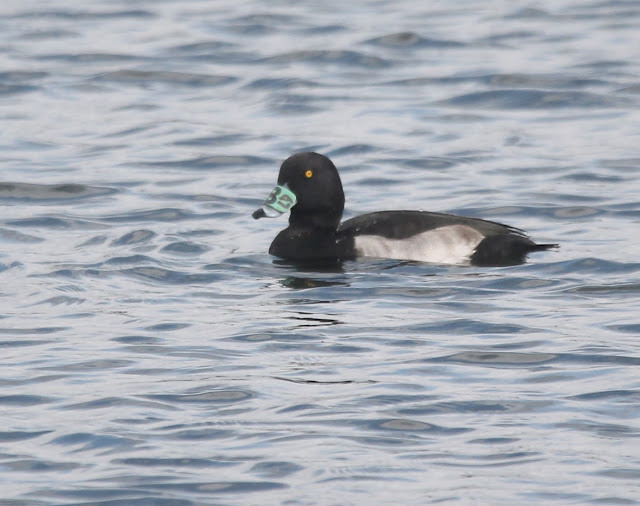 The first Goldeneye of the autumn was a young female-type on the 17th which only stayed until the next day. Our regular birds had still not arrived by the end of the month. Common Scoter is not even annual at the reservoirs with blank years in five of the last ten so two separate records in one month is exceptional. The first were a pair seen by GJ on the 17th arriving from the north on Lockwood before departing south 20 minutes later while CF found a female on West Warwick two days later. 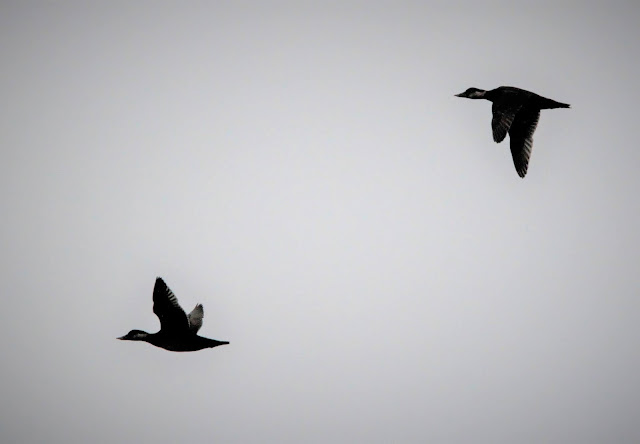 A pair of Scoter departing after a brief rest on Lockwood pic @Chris_Farthing.
September's two Black-necked Grebes remained on Lockwood until at least the 15th with one being seen up to the 19th. Water Rails were heard and occasionally seen throughout the month across the reservoirs. 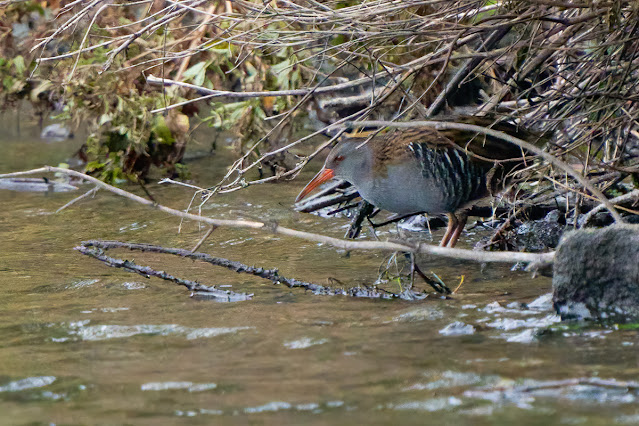 With the Woolley hide shut, seeing Water Raid is far harder this winter pic@OwlTurbot
October was, as usual, a poor month for waders with just five species. They included four  Lapwing on the 3rd and another on the 16th & 17th while the only Dunlin on the 18th narrowly escaped a hunting Peregrine.  Small numbers of Snipe were seen while Common Sandpipers were recorded in ones or twos until the 10th. High water levels in the overflow channel again meant Green Sandpipers, too, were scarce with records only on the 3rd & 12th. 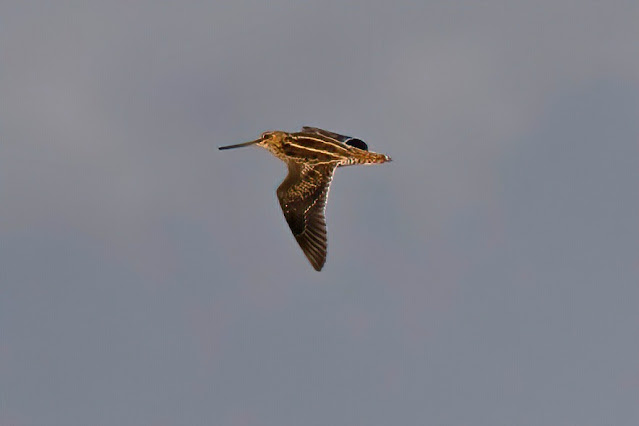 Common Snipe were regularly feeding on the reservoir banks pic @sjnewton
The Wetlands are, for good reason, rarely considered a sea-bird hotspot. But DC earned his reward for braving torrential rain and gale-force winds on the 3rd when a young Kittiwake - the first for at least three years - went north over Lockwood. This was followed, to his amazement, soon after by the second Gannet of the year going south. Different Yellow-legged Gulls were found on 12th and 15th.  There was more proof that Great Egret are getting commoner when the third record of the year was seen by CF going south very early on the 26th. 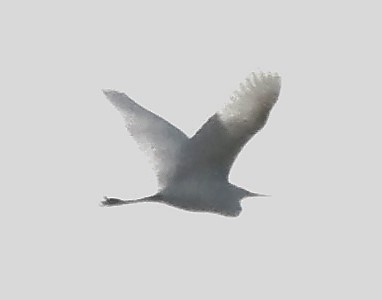 The third Great Egret of the year flew south with two Little Egrets pic @Chris_Farthing
Birds of prey, apart from the regular Peregrines and Sparrowhawks and more occasional Kestrel, were restricted to a Buzzard on the 13th. But LB plugged one of the gaps on the year list when he saw a Short-eared Owl over Lockwood on the 23rd. There was no repeat of last year's mass Jackdaw migration except for one flock of around 50 on the 12th.  Coal Tit, while still bewilderingly rare at the Wetlands, appears to be another species getting easier to see with two on the 18th and another on the 26th. Two Skylarks were also seen on flying over on the 18th with a third on the 28th and two more on the 31st.
After being scarce throughout the Spring and early Autumn, there was a spate of Swallow records with six on the 2nd, two on the 3rd & 5th and the last on the 12th - seven days earlier than the final sighting in 2019. The last Sand Martin was seen on the 2nd while as many as 60 House Martin were still feeding over the reservoirs on the 7th when most seemed to depart. A very tardy individual was seen on the 28th, two weeks later than the last record in 2019.
A late Sedge Warbler was seen on the 1st and an even later Willow Warbler on the 10th. But the warbler of the month - and the year - was a Yellow-browed Warbler which DC heard calling several times just across the Lea in the Ferry Boat Inn car-park. Despite searching thoroughly, it stayed out of sight and presumably vanished with the accompanying tit flock into the Paddock scrub. As Yellow-browed has now been recorded across London, it was inevitable one would eventually turn up at the reservoirs but it just a shame it did not hang around. 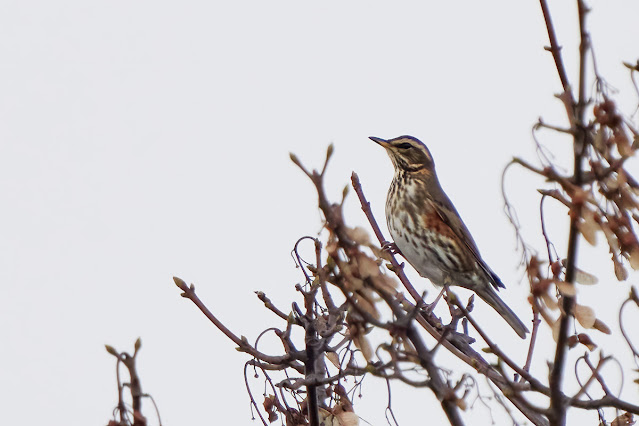 Redwing were few in number this month but always a treat to see perched pic @OwlTurbot
In some Octobers, a westerly passage of winter thrushes as well as Wood Pigeons, Starlings and finches can be a feature of early mornings but not this year. The highest counts of Redwing were 70 on the 12th and 30 on the 15th while Fieldfare were even scarcer. Compared to last year, when 270 were counted on one day, Fieldfare numbers did not reach double figures although the first six on the 12th were five days earlier. 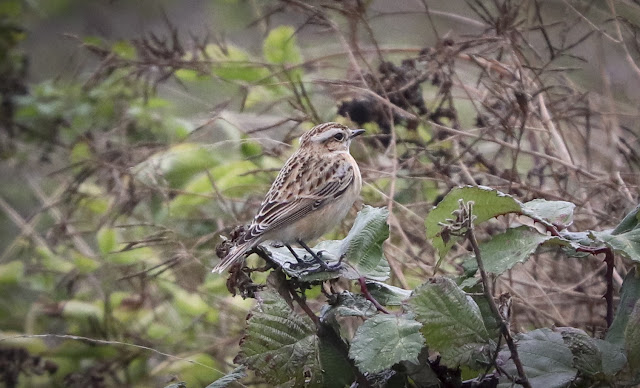 This Whinchat stayed eight days later than the 2019's last record  pic @EugeneDH_Bass
Stonechats kept up their good showing throughout the month - with highest count of six on the 7th -  as did Whinchat with a late record from the 6th to the 10th. Three Wheatears were also seen on the 6th & 7th with the last one  - earlier than usual - on the 10th. 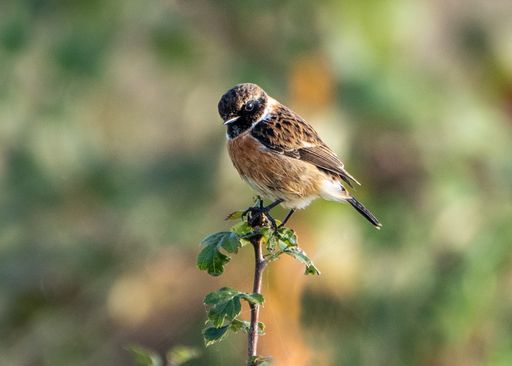 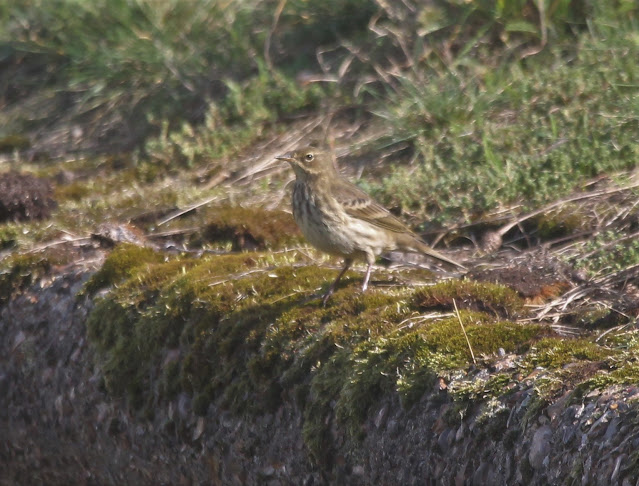 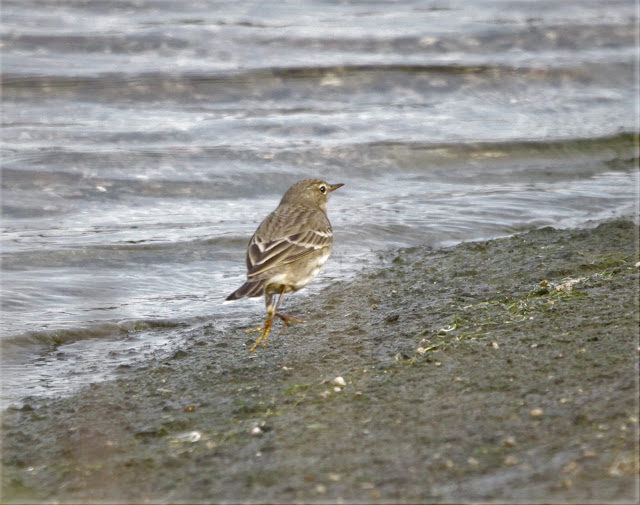 The Wetlands often has to wait until October for the first Rock Pipit of the year. This month there could have been as many as three. The first was found by RE on the 1st which was presumably the same bird seen on the 3rd. Another was found by CF on 14th with records until the 17th while a third was photographed by RS on the 27th. It was also a good month for scarce finches not just at the Wetlands but across London. The highlight was eight Crossbills - a species only recorded on the wider patch in four of the last ten years - seen flying low over No 4 by RE on the 9th. Lesser Redpoll were also seen on four dates with six on the 24th and 27th and eight on 31st while single Siskin were seen on several days with small numbers overflying on the 10th. The list was completed by a Brambling found by AMP on 18th. 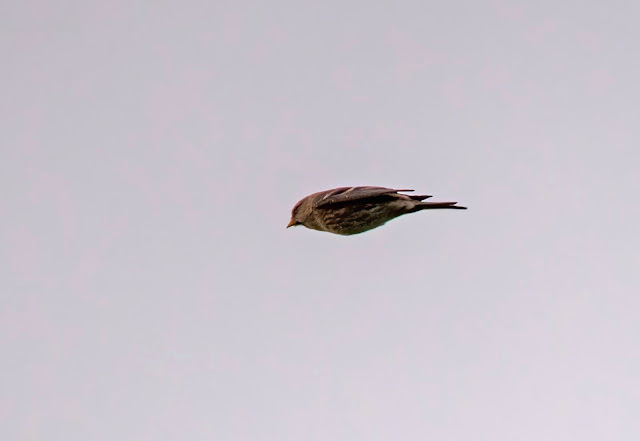 One of a surprisingly high number of Redpoll seen this month pic @sjnewton
With so many species already recorded, it is going to be hard work to add more to the year list. But the reservoirs are still waiting on our annual visit from Barnacle Goose.
DB @porthkillier
Posted by Walthamstow Birders at 12:31 No comments: