Another fairly disapointing photo from the other day, Same bird, same day... I jus thought the scope photos were blank, but this one almost worked, you can see the bill fialry well, and shawl and leggyness. Just thought i'd add it 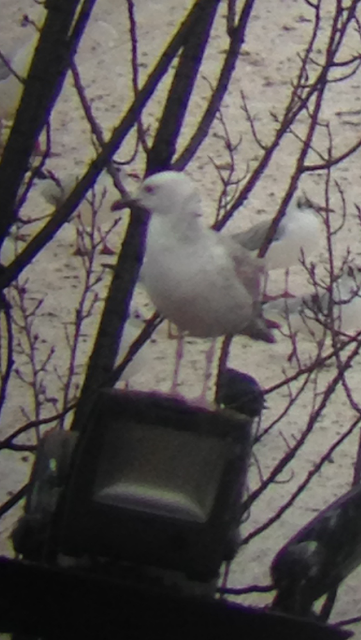 I've been down almost everyday since and havent seen the same number of gulls and there doesnt seem to be a pattern in when they arive so, but i will keep going over the next month i suppose.


Posted by Walthamstow Birders at 18:04 No comments:

With recent sightings of caspian gulls up in the pre roost gathering at amwell and a single bird at Wanstead as well and many being found in the Thames area in general I've turned my attention to gulls for the last few visits to the patch.

Today was Leyton tip, a difficult place to view, with much of the feeding area obscured, however there were probably a couple of hundred large gulls present today, on the tip and on the few surrounding rooves, this is , i reckon the best site locally in my opinion. Double figures of Great Black Backs and around ten or so 'Argentatus' herring gulls were the first birds of note, also at least 4 Jackdaws were present.

When scanning through gulls in winter I'm always on the look out for white headed birds of any age, often 1st winter great black backs catch your eye, in flight or whilst scanning through resting birds, with their contrasting black and white tail, dark tertials and White head...  however I picked this bird up in flight, it showed the clean white upper tail and contrasting black band and white head, exaggerated by the head streaking being mainly in the hind neck, which is the shawl thing people talk about. I could see dark tertials and clean whiteish under wing. The bird then landed on a roof and stood obscured by other gulls and the roof itself.  knowing from flight views that i had a good caspian candidate at least, I fumbled some photos through my scope and through my camera whilst the bird bickered with surrounding herring gulls, (of course not diagnostic behaviour but a good sign)

The bird then came to the front of the roof and through my scope I was able to check the following features;

A number of pale grey scapulars, with white fringes,

It was a nice, constrasty bird, the blacks were black and the whites were frosty white , just the kind of 1st winter you want to come across.

The bird flew onto a lmp post and faced me for a while but i still wasnt able to get a shot of the back end stuff... then it flew the rubbish tip itself , i think  had it in flight brielfy after that but it wasnt seen again.

My apologies for the photos, much of my desription, isnt on view here and it doesn't show much beyond pale head, a 'kink' in the kneck, which i read somewhere is a caspy thing, you can just about see the top of the tertials and  the bird spent most time obscured and when did show i wasn't quick enough to phone scope it, ill be going down tomorrow so hoping its there again and photos to follow... 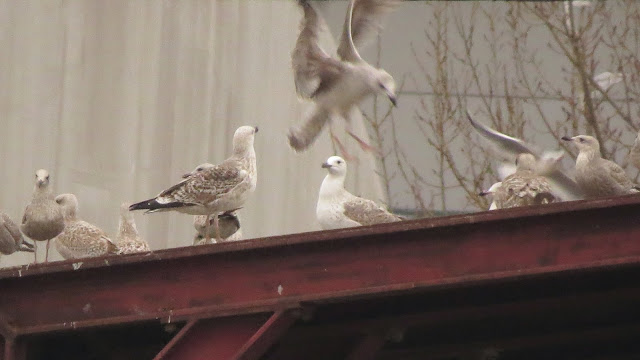 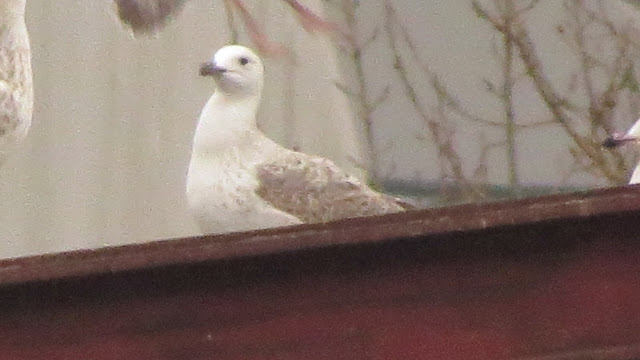 Of course any comments welcome, and any thing I miss out/overlook I'm keen to hear, it's a bird I've found before amoungst 'real gull people' and on my own, but finding one on the patch was challenge and I'm willing to stick my neck out and claim it

@jarpartridge
Posted by Walthamstow Birders at 23:55 No comments: