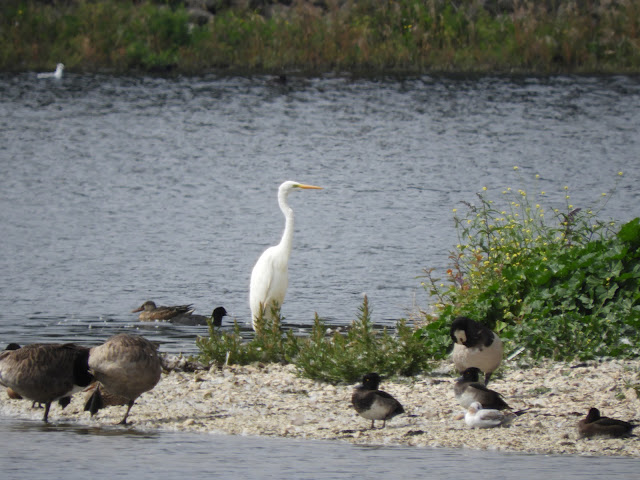 September provided more evidence that the reservoirs generally do better for migrants in Spring than Autumn. But the month did provide the first Wood Sandpipers for six years, the first Barnacle Goose of 2018 and two Great Egrets including one which stayed on the ground long enough to allow it finally to be added to patch lists. The two additions take to 139 the species seen on the reservoirs this year - nine more than at this time in 2017. 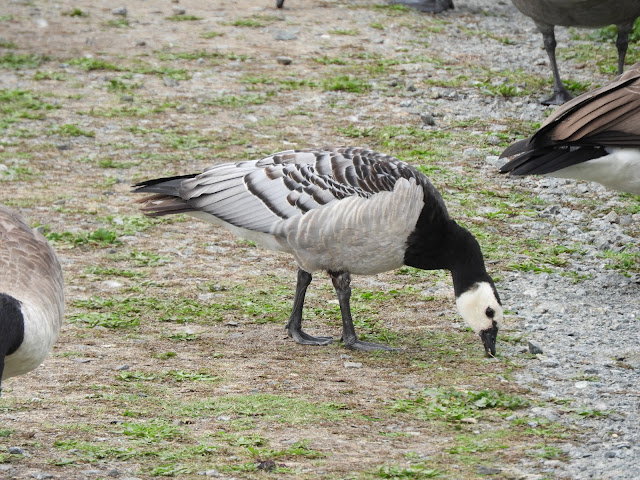 Barnacle Geese are just about annual visitors with last year three visiting for just one day. This year's singleton, as tame as usual, on the 4th had the good grace to stayed over a week.Three Wigeon, the first of the Autumn, were seen on the 5th, with one or two recorded regularly until the end of the month. Shoveler numbers usually peak in early Autumn and the 56 counted on the 19th suggested they have not been too affected by the extra visitors to their favoured home of East Warwick.

Despite being seen with greater frequency at the reservoirs, Great Egret has been a bogey species for many of the local birders with almost all past reports just fly-overs. So the bird which dropped onto the East Warwick island on the 4th and stayed for a couple of hours was a real bonus. It remained just long enough before departing high SW for @birdingprof to drive down from his new home in Suffolk to fill the gap on his patch list. More typical was a second bird seen flying over by PL on the 11th.

Two Buzzards on the 6th and a single on the 26th were the only large birds of prey seen with the sole Hobby on the 21st. But the Peregrines remained a very noisy presence on the pylons throughout the month.

Waders also continued to be thin on the ground. A Whimbrel flew south on the 15th over Lockwood. The peak count of Common Sandpipers for the Autumn was 13 on the 7th. Green Sandpipers were recorded on the 1st, 6th, 19th with two on the 23rd while there were single Redshanks on the 18th and 23rd.

The first Snipe of the season was found on the 5th, 13 days earlier than last year. But the highlight of the month were four Wood Sandpipers picked up by JP circling low over No 5 early on the 6th before carrying on south. They are the first at the reservoirs since one on Lockwood which stayed for a few days in early September 2012.  A 1cy Yellow-legged Gull  was seen on Lockwood on the 5th. The late breeding Common Tern family of adults and their two young were last seen on the 3rd.

The only Skylark was one on the 27th. While last year Swifts lingered on until mid-month, it looks as if none may have been seen this September.  Swallow passage was also very thin with the last record of three on the 23rd typical of the daily count. House and Sand Martins, however, were still plentiful over No 5 early in the month with 400 House Martins counted on the 5th with 30  on the 23rd and one still on the 30th.

Ten Willow Warblers were seen on the 5th but within days, Chiffchaffs took over as the commonest warblers in the mixed feeding flocks along the central path. These also included Common Whitethroat, Lesser Whitethroat, Blackcap and Reed Warbler early in the month as well as a Garden Warbler on the 7th.

Spotted Flycatcher was one of the few migrants which seemed commoner than in recent years. The good run at the end of August continued with singles on the 6th and 11th, two on the 10th and the last on the 25th. The only Whinchat was one on the 5th while the first Stonechat of the Autumn was on the 24th, the same day as the first bird turned up at neighbouring Wanstead.

Wheatears were another species in short supply with three on the 5th and singles on the 11th, 13th, 23rd and 30th. Yellow Wagtails, however, had a good month with birds on at least eight days with two on the 6th and a remarkable ten on the 24th. Grey Wagtails were also widespread throughout the month with a count of 11 together in the overflow channel on the 13th suggesting the hot, dry summer meant a successful breeding season.

Time is running out to add Garganey and Turnstone to the year list. But the last quarter should still provide the opportunity for Black-necked Grebe, the other unexpected omission so far.


Posted by Walthamstow Birders at 19:46 No comments: