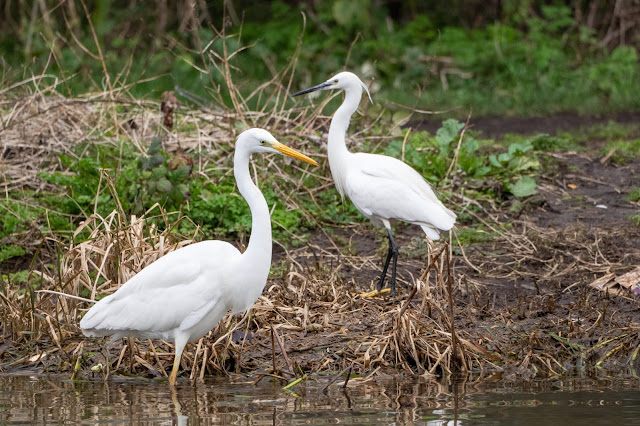 Great White Egret, here with Little Egret, visited Lockwood from Tottenham Marsh pic  AMP
Rarest bird of a month was undoubtedly Raven, only the second record in recent years.  But it was the Great White Egret on nearby Tottenham Marsh, which finally visited Lockwood, and the re-discovery of January's White-fronted Goose which attracted most attention. The month also saw the first Lesser Redpoll of the year along with the more expected Dunlin, Greenfinch, Jackdaw and Snipe.
The seven additions take the Wetlands' year list to 82 which is one more than last year and six more than in 2019 - remarkable again given that much of the Wetlands remained out-of-bounds for the entire month. The discovery of a Golden Plover resting on Tottenham Marsh and a dead Knot on Walthamstow Marsh during the week-long freezing spell from the 7th strongly suggests that, as last month, some species must have passed through the reservoirs unseen. The 2018 'Beast from the East', for example, saw seven species of wader along with Pintail and a flock of Wigeon on the first day alone.
The adult White-fronted Goose, seen in early January, was rediscovered by AMP on the 9th, presumably having been out-of-sight somewhere in the area.  It was seen on and off for the rest of the month around the north reservoirs or on No 5 through the fence at Coppermill Lane. 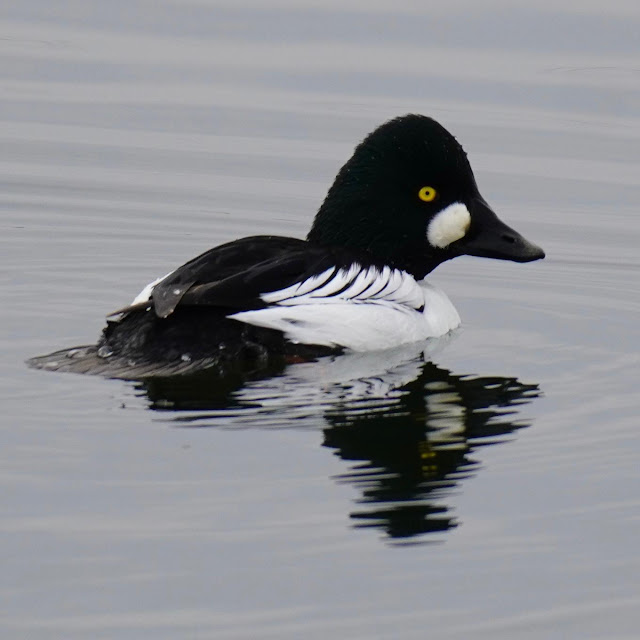 This fine drake was one of eight Goldeneye wintering at the Wetlands pic @ alex_aspden
Eight Goldeneye and four Goosander were counted on the 11th during the all site survey which was the only time access to Nos 4 &5 and both Warwick reservoirs took place during the month. The survey also found 22 Teal, 77 Gadwall, 323 Tufted Duck and six Shelduck while nine Shoveler were seen on the 16th. 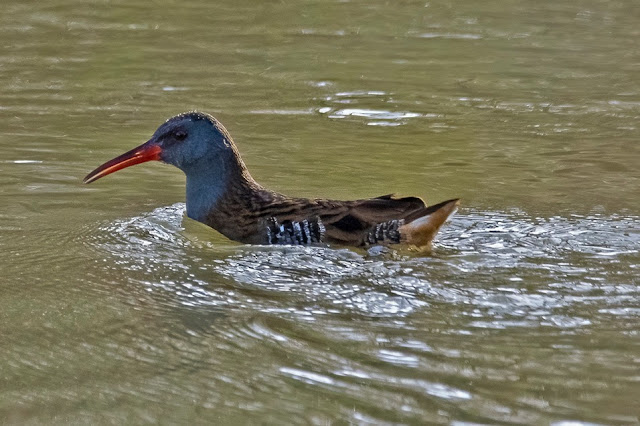 A normally skulking Water Rail  showing itself by swimming across the Lea pic @sjnewton
Although the movement of Lapwings during the freezing spell did not compare to the many hundreds seen over nearby Wanstead, ten were seen resting on Lockwood on the 7th building to a peak of around 150 on, and over, the Wetlands on the 11th - with 40 going east on the 16th after the thaw. 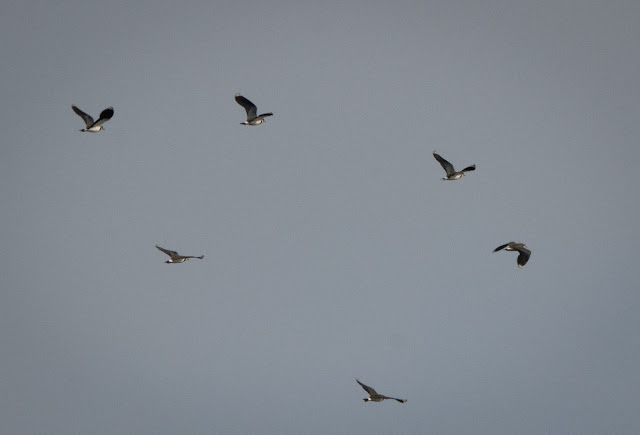 Over 200 Lapwing were seen during the freezing spell pic @EugeneDH_Bass

A Dunlin  was found on the 11th on East Warwick during the survey which also showed the Common Sandpiper was still wintering on No 5. Ice in the past has seen good numbers of Common Snipe on the reservoirs. But with the most likely spots off-limits, it was only added to the year list on the 26th when one was spotted in the No 1 reed-bed. A 1W Caspian Gull was seen by DH on No 5 through the fence on the 1st. 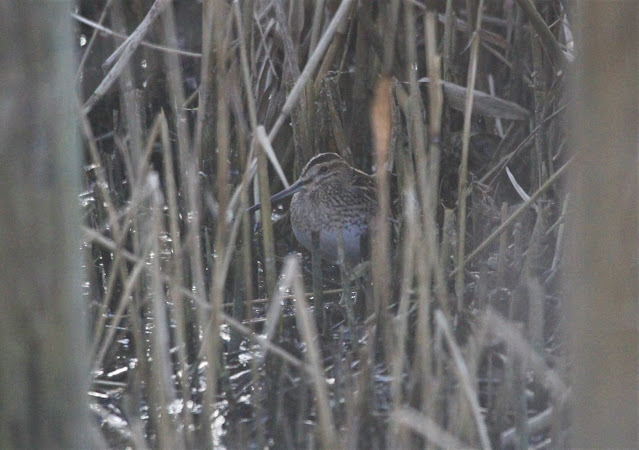 Common Snipe giving itself up by feeding close to the path pic @ Chris_Farthing
The confiding Great White Egret which took up residence on Tottenham Marsh from the 19th delighted birders if not the fast reducing local rat, vole or fish population. It was finally added to the reservoirs' list when seen by LB resting around Lockwood on the 21st to provide an excuse for these just off-site fantastic photographs. What was once a true rarity - seen only once in five years from 2010 - has now been recorded annually since 2015. The month, however, could have been even better if the White Stork spotted going west over Tottenham Hale on the 23rd by PL had been seen over the reservoirs. 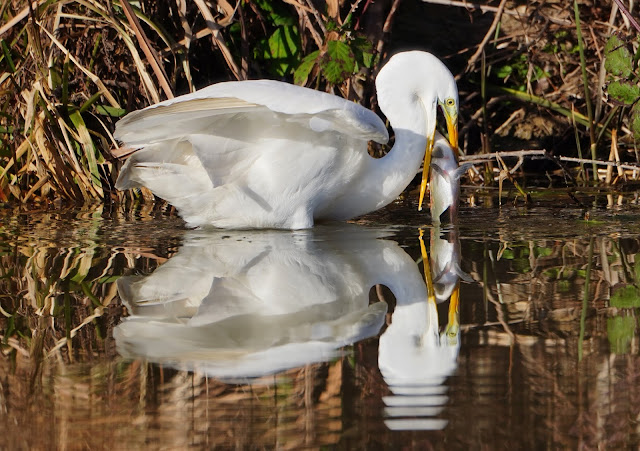 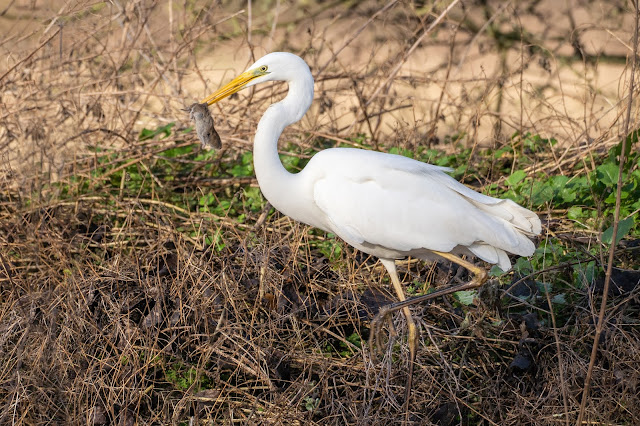 The regular Spring movement of raptors began on the 26th when two Red Kites and a Common Buzzard took advantage of the good conditions. Like both Great White Egrets and White Stork, Raven records in London are increasing rapidly.. But while they have been seen nearby, the only recent record for the reservoirs was in 2016 until one was seen by OS over West Warwick on the 23rd. A pair were also seen on several occasions over Tottenham Marsh with one seen again over the reservoirs on the 27th.  Jackdaw is another species which seems to keep to a rota with the first on the 21st two days later than last year. 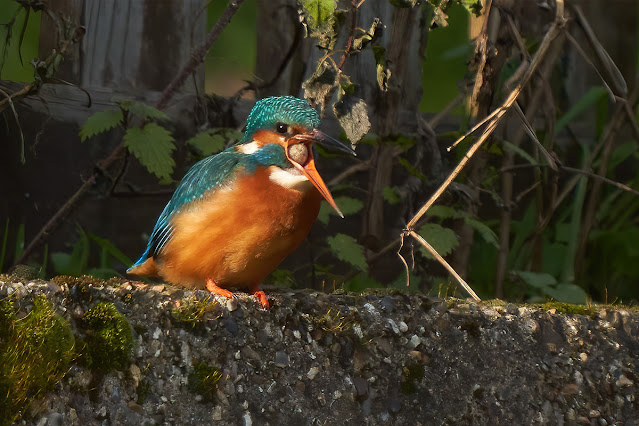 A  stunning photograph of a Kingfisher coughing up a fish ball pic @OwlTurbot
The all-site survey found a Stonechat and 16 Meadow Pipits on the 11th with numbers probably boosted by the freezing conditions. Two Lesser Redpoll were seen by JP on the 14th while the first Greenfinch returned on the 18th. 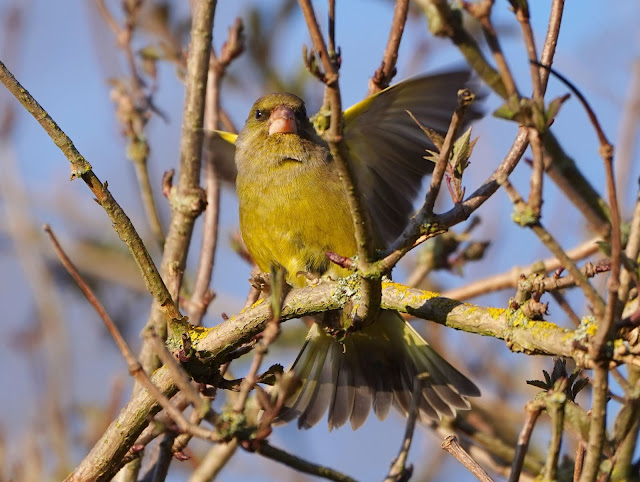 Greenfinches, which seem to disappear for the winter began returning this month pic AMP
DB @ porthkillier
Posted by Walthamstow Birders at 21:07 No comments: