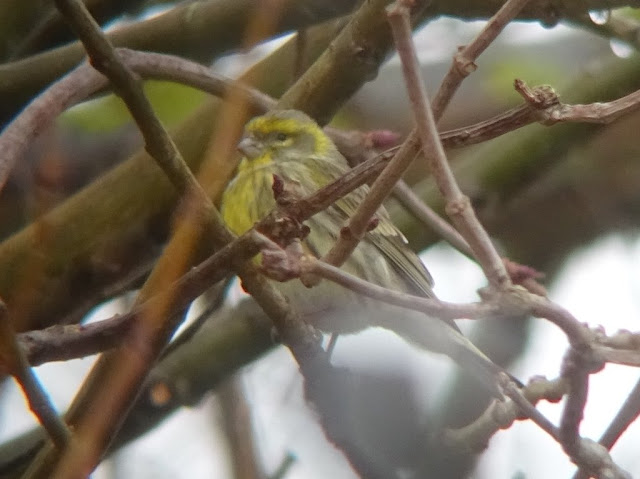 For the second month running, a new bird was added to the reservoir's all-time list with the discovery of a male Serin. It is an example of what's known in the States as the Patagonia Picnic Table Effect - named after a famous lay-by in SE Arizona - where birders looking for one rare bird find another. It takes the reservoirs' list to an impressive 236.

Unlike the Little Bunting which remained all month, the Serin was sadly only seen for a few minutes. More predictably those waiting patiently for the bunting also added Red Kite and Red-crested Pochard to the year list while Mediterranean Gull, Bullfinch and Redpoll and two more reservoirs' rarities in Great Egret and Glaucous Gull were seen as well. It was an exceptionally good month and takes the total number of species seen this year already to 90, five more than this time in 2017.

RT, who spends most of most days fly-fishing on No 5, always has a good chance of fly-overs and scored again with a Great Egret low towards the egret islands on the 18th. Despite becoming much more common in London, it remains absent from most of the patch regulars' list. Four Red-crested Pochard were seen on the 13th flying towards West Warwick. The drake Scaup remained all month on No 4. It has already stayed longer than it did in 2016 and is coming up fast towards its 2017 departure date. A female Scaup was also seen on East Warwick on the 14th by several birders but, despite being Valentine's Day, did not stay long enough to pair up with our resident male. As many as a dozen Goldeneye, now often in pairs, could be found scattered around the reservoirs while up to three Goosander were seen, usually early, on either High Maynard or No 4 before flying back towards the Banbury.

The first Red Kite of the year was seen on the 2nd with the first two Buzzards on the 22nd. The next two months are usually the best for both species. The pair of Peregrines could be seen hunting and displaying regularly over the reservoirs throughout the month. 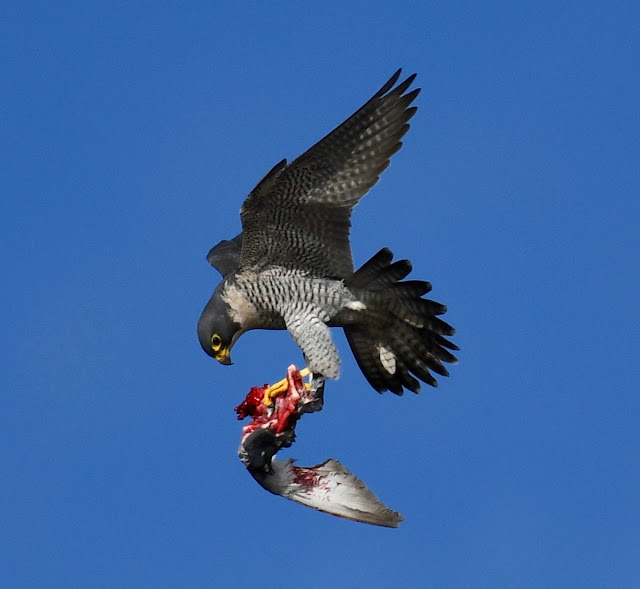 Despite a good edge around East Warwick, waders remained scarce throughout February. While two Common Sandpipers wintered on the reservoirs - and were seen together on the 14th - they kept out of sight for much of the month. Green Sandpipers were also far less obvious than in previous winters with singles seen on the 8th, 12th, 26th and 27th. Lapwing numbers, however, were good with five on the 20th, eight on the 24th, three on the 26th and a cold weather movement of 47 on the 27th including a flock of 32 as the Beast from the East swept in. A few Snipe were seen as they flew between reed-beds.

After the Glaucous Gull seen at Leyton tip last month, PW spotted a juvenile flying south close-by over No 4 on the 23rd. It was also reported next day from the filter beds and on the 26th. It means that after a gap of over 20 years on the reservoirs, Glaucous Gulls have now appeared in two successive years. An adult Mediterranean Gull was resting on the filter beds on the 20th.

Meadow Pipits, for some reason, also continue to be scarce this winter with singles recorded on just three dates. MM, however, had an early Rock Pipit on the 20th on the rocky shore of East Warwick. Fieldfare were resident in good numbers throughout the month with a top count of 70 on the side of No 5 on the 19th. In contrast, only a few Redwing seem to be wintering at the reservoirs. And while some recent winters have seen three Stonechats regularly in the reed beds around the Warwicks, a solitary female was seen on only a handful of dates this month. 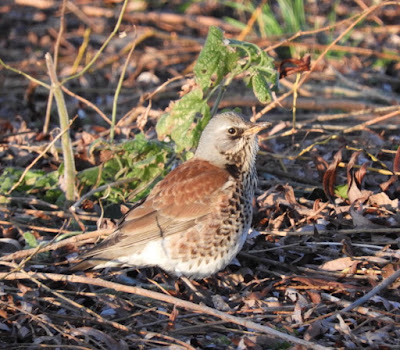 A tame Fieldfare took up residence around the Engine House

Cetti's Warblers restrained themselves to short bursts of song this month. Chiffchaffs numbers were again low but could be seen, in the company of Goldcrests, feeding on the southern section of the Coppermill stream. Both were also seen occasionally in the bunting bush. With so many alders, Redpoll should be a more frequent visitor to the reservoirs but the single seen and heard flying over on the 7th by DM was all too typical. Bullfinches are even more scarce so two seen flying over Lockwood from Tottenham Marsh by SF on the 10th may be the only ones recorded this year.

There is, however, no shortage of Linnets this winter. The flock on the weeds between the Engine House and East Warwick built up steadily throughout the month and hit over 80 on the 28th when presumably the heavy snow prevented birds feeding on the ground. It is a remarkable number for recent years. And it was this flock which apparently help attract the male Serin to the same general area on the 10th.which was found by visiting Herts birder Roy Hargreaves. Its stay was all too short but stayed long enough to pose for a couple of photographs in the hedge around the feeders and even to sing briefly. It remains a rare bird in London with only 21 records up to the end of 2015. 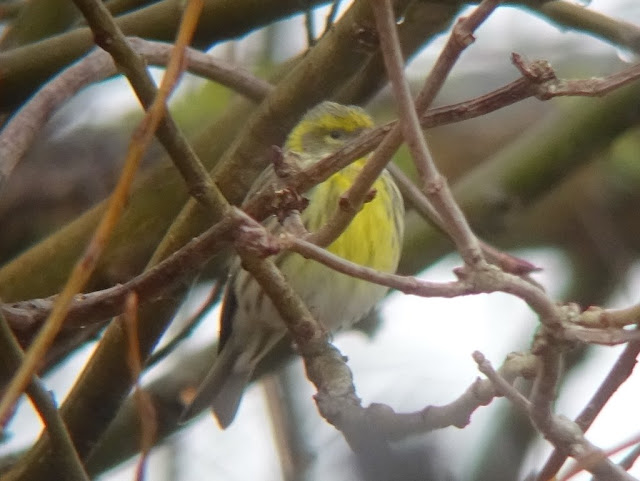 The Little Bunting was far more obliging and continued to attract birders from as far as Norfolk and Bristol throughout the month. It also took a liking to the seeds put down in front of its favourite bushes where it could be seen in the company of some of the eight-plus Reed Buntings - again a record count in recent years - on the ground for the first time. Even the heavy snowfall at the end of the month had not yet forced it to depart. 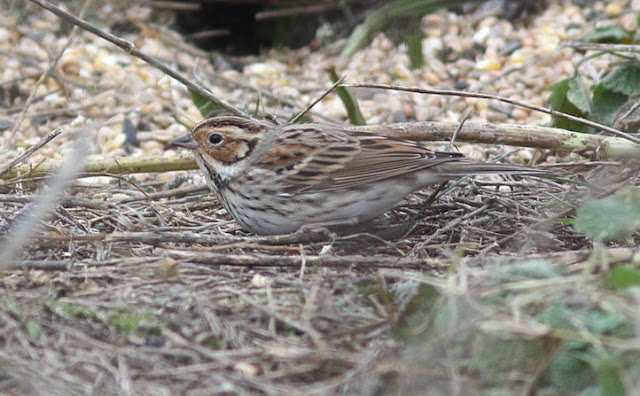 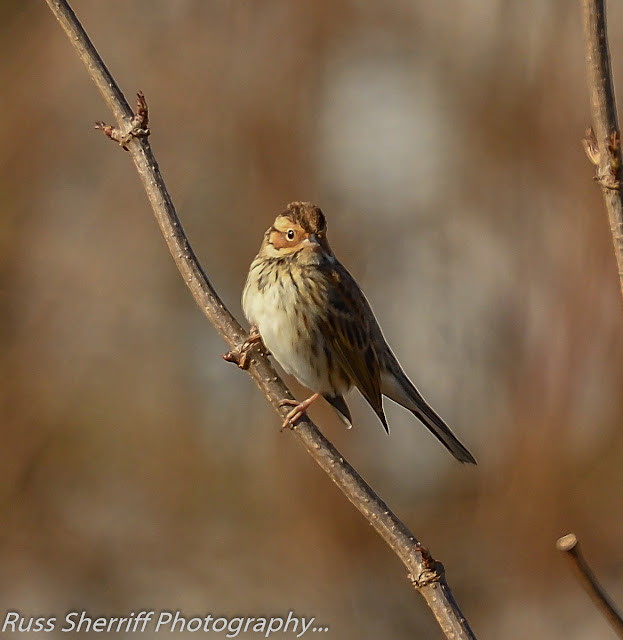 Despite the snow and freezing conditions at the end of the month, it may be only a matter of days before the first summer migrants arrive. The first Sand Martin was seen last year on the very early date of March 6 and the first Wheatear on the 12th.


Posted by Walthamstow Birders at 18:21 No comments: