With Mrs. Prof out gadding I had the opportunity to go Nightjarring or go around the patch, a no brainer I’m sure you would agree, but somehow I opted for the patch!

@porthkillier had earlier tweeted that the edge of the Lockwood looked good so I decided I would give that a bash, but first I would check out the Southern section. There were no Snakes, or anything else, under the sheets at the top of the East Warwick, though a juvenile Sedge Warbler was a welcome surprise. Terns were much in evidence all over the complex, including a well grown juvenile on the East Warwick raft. A Common Sandpiper was the only Wader there.

The mystery deepens with the juvenile Great Black-backed Gulls, I’ve still to see them. Two adults were on No.4 and a 3rd year was flying around No.5. The dead individual was still showing well between Nos. 4/5. Tufted Ducks numbers are building steadily and I’m sure Pete L will have a count for us soon. 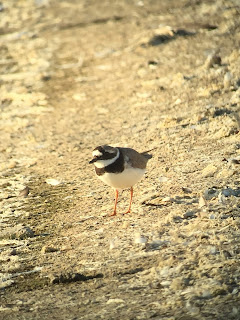 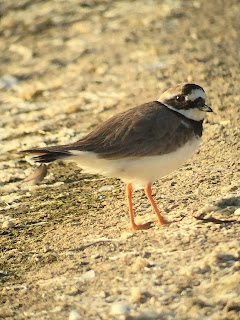 I had to drag myself up to the Northern side and decided I would just scope it from the bottom, fortunately I spotted a couple of Common Sandpipers and decided to venture up to the middle. This was a good move, as I progressed I noticed there were 4 Common Sandpipers and a Plover, initially I suspected it to be Little Ringed, being quite horizontal in carriage, as I moved closer it appeared not to have an eye ring and the breast band seemed quite deep, this was clearly worth pursuing. I stalked it closer and closer and everything screamed Ringed Plover. I couldn’t quite bring myself to claim it as it is not a Bird I see much at the reservoirs and certainly not well. (On checking my records my last two ‘sightings’ were heard only and my last actual sighting was seemingly 32 years ago!). I rattled off quite a number of shots and everything seemed to point to Ringed as opposed to Little Ringed. Ringed Plover is just about annual on the patch but they don’t often hang around, I was well pleased but decided I needed to see the spread wing to be totally happy. It proved almost impossible to flush and just kept running ahead of me at about 3m range, happily it called a few times, confirming its identity and then eventually flew a short distance…wing bar! 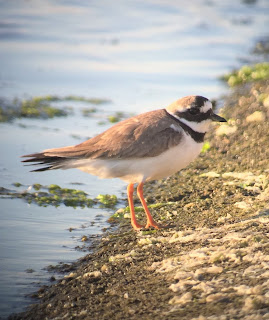 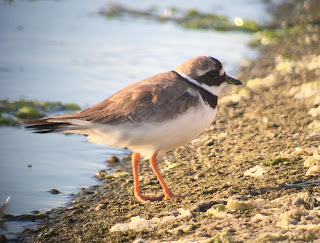 I put the news out and left it in peace, well at least temporarily as 3 joggers and a cyclist zoomed past along the bank of the reservoir, given its confiding nature I suspect it returned to whence it came. 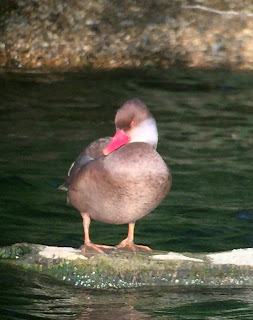 The only other Birds of consequence were a Green Sandpiper along the concrete edge of the High Maynard and the eclipse drake Red-crested Pochard still.

@birdingprof
Posted by Walthamstow Birders at 23:46