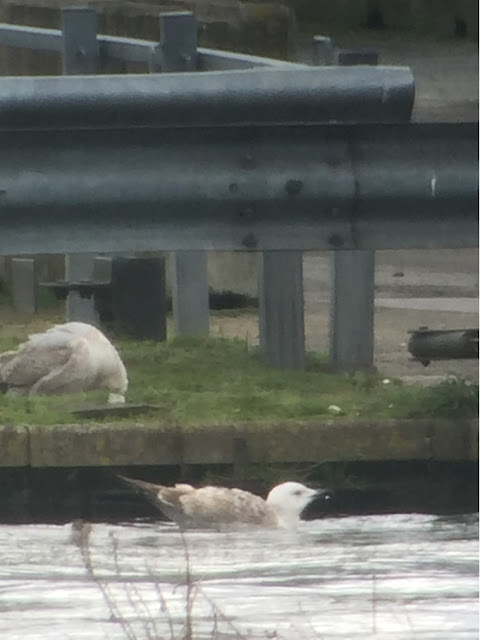 First Caspian Gull of the year found by JP who has spent all of the year so far looking at them.
pic @birdingprof
February lived up to its birders' reputation as a pretty drab month between the somewhat artificial excitement of new year listing in January and the real joy of the return of the summer migrants in March. Indeed, but for a flurry at the end of the month which included an obliging Siberian Chiffchaff, the first Curlew since 2014, Wigeon, and Caspian Gull, it would have been dreadful with the only other new birds for the year being Skylark and Red-crested Pochard.

The Wigeon, a species which has become scarcer on the reservoirs, was seen on the 27th flying north off High Maynard while the Red-crested Pochard was another one-day wonder on Lockwood on the  8th. Our resident drake Scaup stayed...well ....resident for the month largely on No 4 where the fast falling water levels inspired a burst of feeding activity in a bird which usually spends all day asleep. Peak counts of Goldeneye were 12 on the 21st with five Goosander on the 8th. A family party of around eight newly hatched Egyptian Geese on the 19th had been reduced to just three two days later. 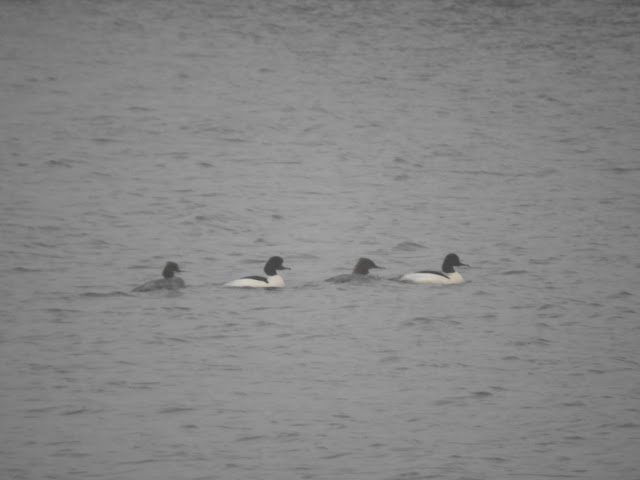 Goosander in the gloom when No 4 still had water

Despite the fantastic habitat as water levels on No 4 and No 5 continued to fall, the only wader of note was a Curlew on the 25th and that was flying north. Two Common Sandpipers continued to winter on Nos 4 & 5 where there were two Lapwings on the 16th. Two Snipe were seen on the 24th while the peak count of four Green Sandpipers was on the 1st. A 1st winter Caspian Gull was found on the filter beds on the 26th where there had been an adult Mediterranean Gull five days before. Lockwood also held a 2W Yellow-legged Gull on the 26th. The continued presence of Great Black backed Gulls on the No 5 islands, which last year hosted London;s first successful breeding of the species, suggests there might be more bad news ahead for young Egyptian Geese....

The only bird of prey of note was a Buzzard on the 21st although.Peregrine, Kestrel and Sparrowhawk continued to be seen regularly. Passerines, apart from thrushes with up to 40 Fieldfare and Redwing, were thin on the ground. Three Skylarks were seen over Lockwood on the 19th with two more on the 21st.  January's Black Redstart was seen intermittently around the filter beds until the 9th with probably the same bird re-appearing on the 28th. The highlight was a Siberian Chiffchaff found, in the company of up to five Common Chiffchaffs, in the hedges at the NE end of Lockwood on the 27th which had the decency to hang around so most patch birders could catch up with it. Green Woodpecker and Mistle Thrush were easier to see than in some years - particularly in the horse paddock - but Cetti's Warbler were so silent that it was easy to think they had disappeared. The small flock of Meadow Pipits kept faithfully to the banks of Lockwood through the month. 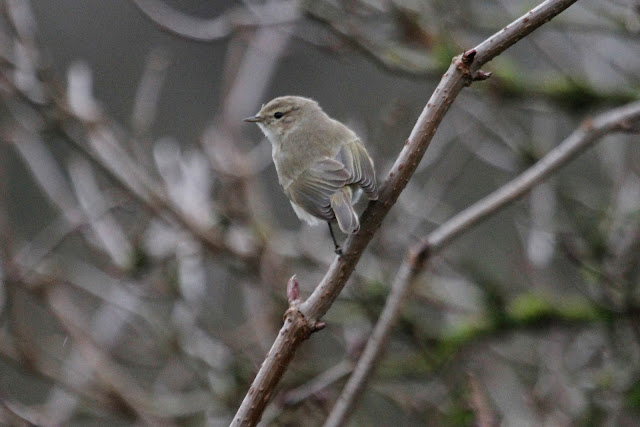 A showy Siberian Chiffchaff (if you waited long enough) pic@jarpartridge

Posted by Walthamstow Birders at 23:04