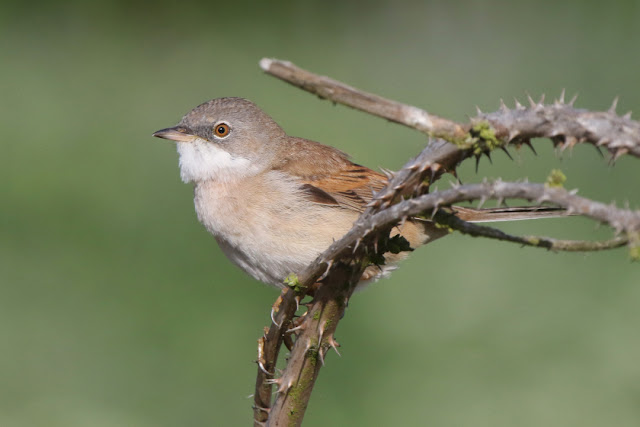 After the excitement of March, April got off to a very slow start and never really started motoring. The cause, ironically, was too good weather with winds generally from the north and west slowing down migration and clear skies allowing those that were travelling to continue on their way. Our mud-flats disappeared as well with No 4 re-filled from the beginning of the month and No 5 from the 14th so fast that it looked as if the tide was coming in. By the end of the month, they were back to normal.

But the last day of mud on No 5 did attract five species of wader while among the other good birds for the month were two very early Little Terns, a Great White Egret, Ruff, and a Pied Flycatcher which added some glitter to a rather drab annual patch day. The count across the whole patch on the 29th was 79 species – well down on last year’s record 88 but a reasonable total compared to most other sites in the capital.

Pochard and Shelduck numbers appeared to remain high throughout the month. A drake Wigeon on East Warwick on the 26th was a surprise while there was still a lingering pair of Shoveler on the 29th. Red-Crested Pochard were recorded throughout the month with seven on the 17th the highest total. The last Goldeneye were on the 5th.

The 13th was lucky for RT when he had a Great White Egret – with an accompanying Little Egret for comparison - on No 4. While getting commoner, it remains missing from most of the regular patch watchers’ lists. A count of Grey Herons at the beginning of the month found just 24 nests, a worrying decline for what was once England’s second largest colony with 100 pairs as recently as the end of the nineties.

Single Red Kites were recorded on at least four dates in the month but the general feeling is numbers were down on the last couple of years. Buzzards were also seen throughout the month with a peak count of eight on the 8th with five in the air together. The Peregrine pair continued to be seen regularly on the pylon closest to the new visitor centre, with a second male seen soaring overhead on one occasion. The first Hobby of the year and the only one so far was on the 26th – exactly the same date as in 2016.

It was another good month for waders despite No 4 & 5 being filled a few weeks too early to catch the peak migration. Oystercatchers were more regular than usual with two on the 11th and perhaps on the 29th, with singles on the 14th & 15th, 17th and 24th. Numbers of Little Ringed Plover, attracted by the drained No 5, were also high. The peak count was 11 in the late afternoon of the 4th with five still around on the 26th. With numbers regularly higher in the evening, it was thought they might be arriving from the surrounding area to feed or roost. 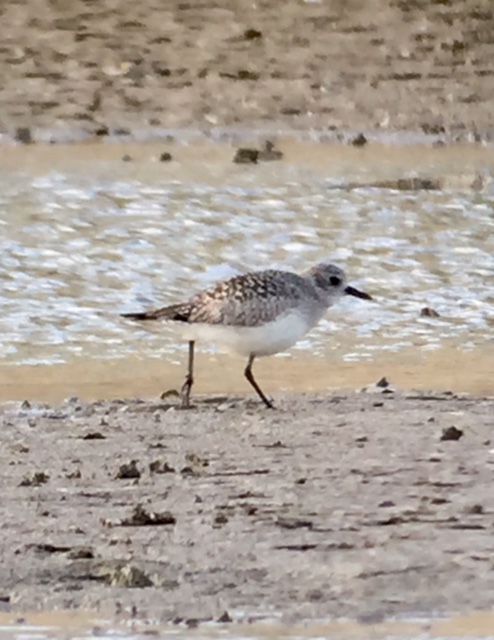 Second Grey Plover of the year enjoying the mud @birdingprof

The second Grey Plover of the year spent the day on No 5 on the 16th to allow those who missed last month’s bird to catch up with it. The same was true of two Black-tailed Godwits on No 5 on the 19th and the Ruff brought down by the rain on East Warwick on the 24th. Lapwings continue to be scarce with the only record again on the 3rd. Other expected waders were Dunlin on the 18th and 30th, Redshank on the 2nd while a Snipe lingered in the new reed bed of No 1 until the end of the month. 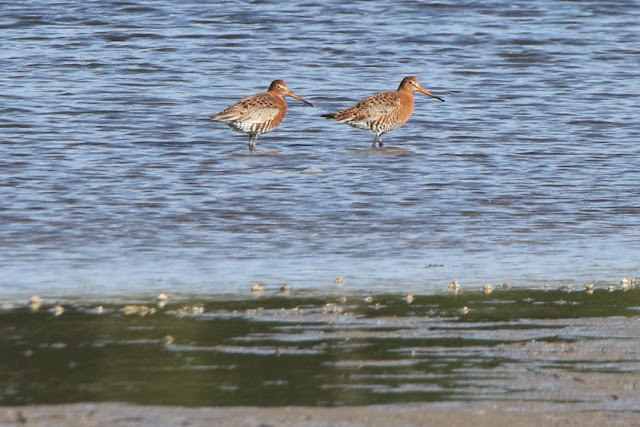 Two Islandica Black-tailed Godwits in all their finery @jarpartridge 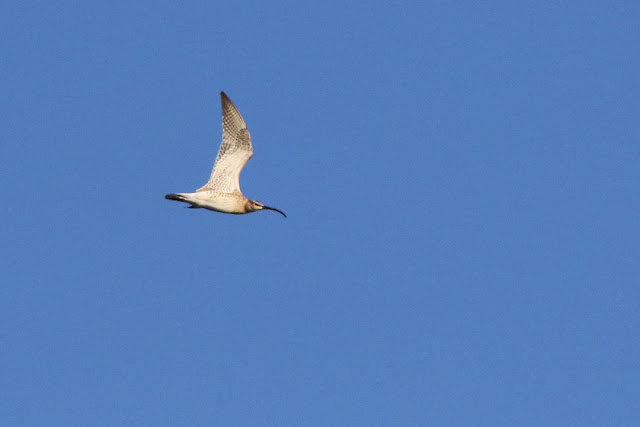 Whimbrel heading East over No 5 @jarparrtridge

The 16th wader species of the year –and the fifth of the day on No 5 - was a Greenshank on the 18th followed by a Whimbrel next day which flew over east. A second Greenshank stayed for three days on No 5 from the 21st. Common Sandpiper numbers built up during the month with six on 23rd and 28th the highest count while Green Sandpipers continued to be seen until at least the 23rd. 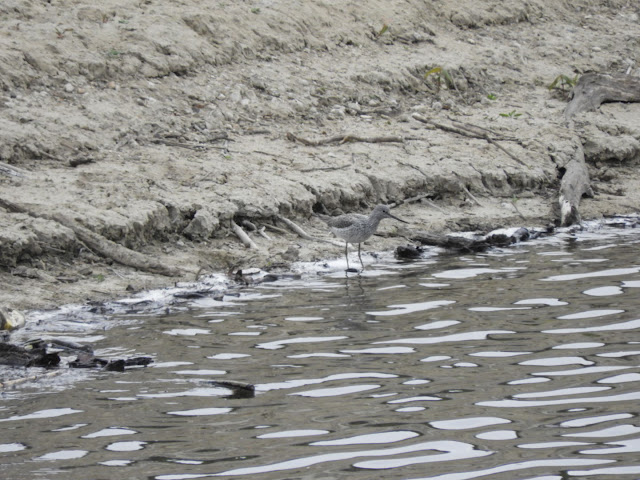 By the time the second Greenshank has arrived, the mud flats had disappeared

A first summer Caspian Gull was found roosting on No 5 on the 26th It can’t be good news for goslings or ducklings but young Greater Black-backed Gulls seemed to have taken a liking to the reservoirs in recent years with up to 22 being counted on East Warwick alone during the month, no doubt helped by a good diet of dead trout. Common Gulls usually depart by April not to return until September at the earliest but one tantalised by staying right up until but not on patch day. 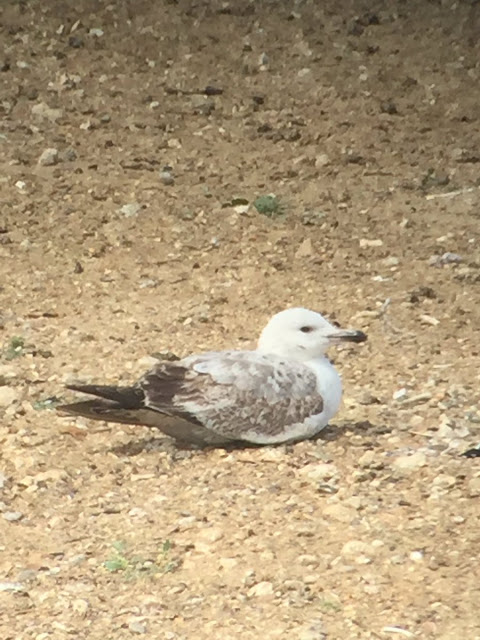 You could have got good money for a bet that the first tern would be Little Terns but PL and GJ found two on No 4 on the 9th. They only stayed a few minutes just like last year’s bird on May 8th. The first Common Terns were more than a week behind with two on 17th with just a handful until the end of the month while two Arctic Terns passed through on the 29th.

The cold and generally northerly winds of the first half of the month meant passerine passage was very slow. The first Swifts were two on 16th – a day later than last year. A single House Martin was seen on 13th with six on the 16th. Just the odd Swallow was seen in the first half of the month with a more noticeable movement from the 15th. A Skylark found feeding on the banks of Lockwood on the 11th on Lockwood stayed unusually until the 13th.

Meadow Pipits were surprisingly scarce but passage of c50 in small parties on 21st was mirrored at Hampstead Heath. The first Yellow Wagtail was on 13th with another on the 16th and then very small numbers until the end of the month. White Wagtails were also seen in small numbers from the 8th with six on the 13th. After early birds in March, we had to wait until the 9th for the first Wheatear of the month, with another on East Warwick on the 10th & 11th and a Greenland type on the 13th. The maximum count was a paltry five on the 21st including three on the filter beds. Two late Redwing were seen on the 10th.

A Reed Warbler on the 5th was – given where it was found - was likely a passage bird with two singing in the West Warwick reed-bed on the 11th the first returners. The good news is that the freshly planted reed beds are already seeing this species spread out. After the early record in March, a Sedge Warbler was back on territory at the top of East Warwick on the 9th which was the same day the first Whitethroat was seen – four days earlier than last year. Most of the breeding birds, however, did not arrive until the last days of the month. A Lesser Whitethroat was found on the central path on the 15th. Small numbers of Willow Warblers were seen with three singing on the 29th while the Siberian Chiffchaff stayed and occasionally sang as well until at least the 9th.

A Spring Pied Flycatcher is an unusual record on the reservoirs so the female found by SH on the 29th would have been the icing on the cake for those taking part in the patch day if it had not disappeared after five minutes. Corvid passage continued with three Rooks on the 3rd and another on the 19th. With 14 new additions in April, it took the reservoir year list to 121.