Last week, a couple of the local birdwatchers and residents noticed these blue signs had been displayed on Walthamstow Marshes and the surrounding area.

It now turns out that Walthamstow Wetlands are applying for a Premises Licence, which will allow Live/Recorded Music until 10pm at night and the consumption of alcoholic drinks until midnight. 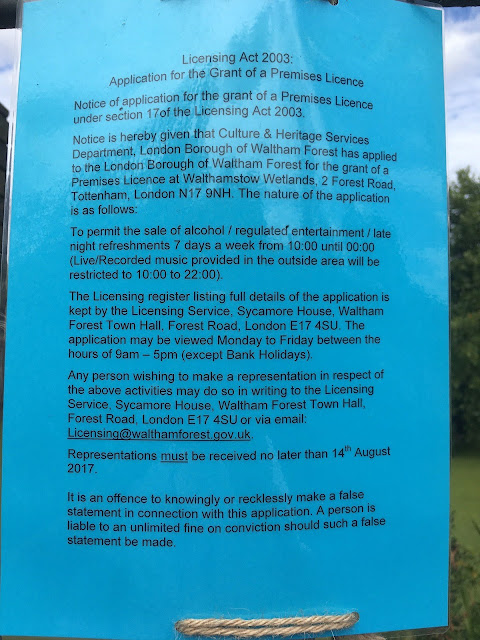 Now, at first glance, this looks like a great idea. After all, what could be better than watching nature with a nice glass of beer or wine in hand?

Unfortunately, the associated noise and lighting at such events would cause extensive disturbance to protected, schedule one species of birds and animals under the Wildlife and Countryside Act 1981.
The wetlands are, of course, nationally and internationally recognised as an important wintering ground for rare and vulnerable birds such as Gadwall and Shoveler. They also provide an important pit-stop for birds migrating to and from their breeding grounds, while over seven different species of bats have been recorded on site.

After writing to the licensing team at Waltham Forest, we were informed that 'in order to be considered relevant, representations [objections] made to applications under the the Licensing Act 2003' must relate to the following four licensing objectives:


As such, we have drafted a template letter to ensure that any objections on wildlife grounds meet these four licensing objections, which can be accessed online here.

Please copy and send your representations to the Licensing Team by post by midnight on 14th August.


Posted by Walthamstow Birders at 23:58