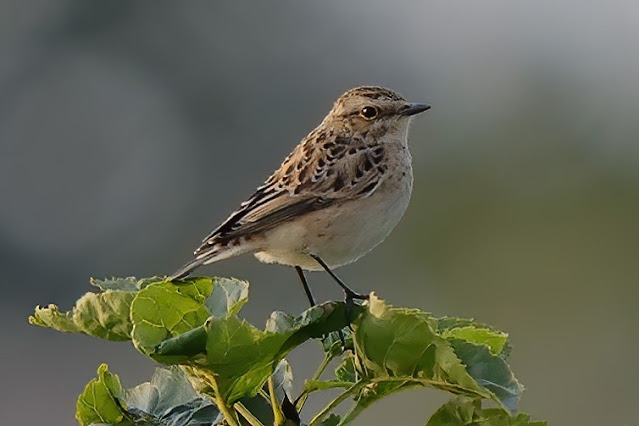 Whinchats - among the smartest of British birds - performed well this month pic @sjnewton
September kept up the excellent run of recent months with nine species added to the year list including the first Gannet since 2012 and the first Tawny Owl in recent memory. The new additions also included three ducks - Pintail, Mandarin and Red-crested Pochard - as well as a male Ring Ouzel along with fly-over Ringed Plover, Redpoll and Siskin. 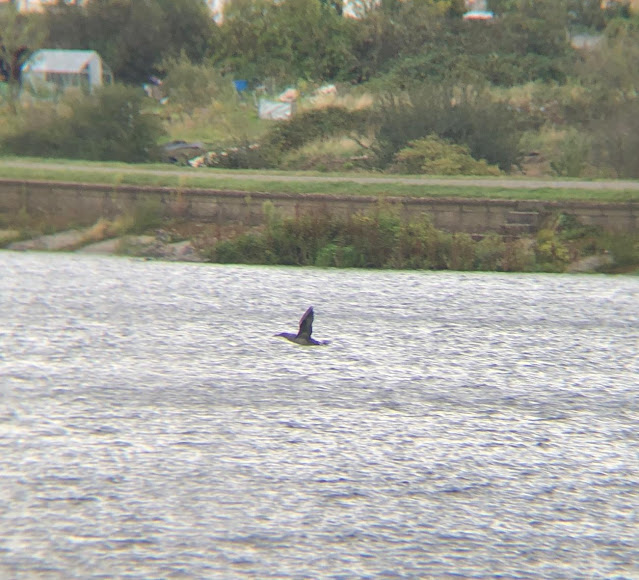 Gale-force winds dropped a juvenile Gannet onto Lockwood pic @wheresrhys
September also saw the second Great Egret of the year, two obliging Black-necked Grebes, an influx of Wigeon and a trickle of Whinchat, Spotted Flycatchers and Yellow Wagtails. The additions take the year list so far to a remarkable 139 - eight more than at the end of October in 2019 and the same total at the end of September as the Wetlands' stellar 2018. It might have been even better if the two Cranes which flew south east from Tyttenhanger to Wanstead and then onto Rainham on the 27th - a route which must have put them close to the reservoirs - had been picked up. 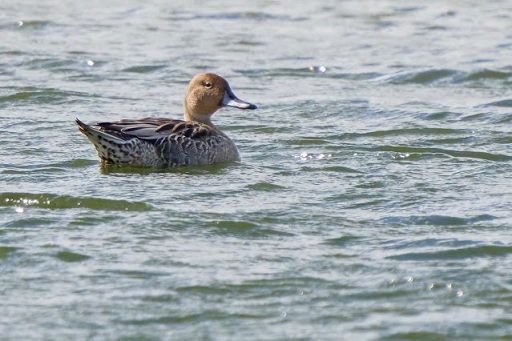 A smart Pintail began to reveal itself as a male as the month went on @pic @OwlTurbot
It was a good month for ducks at the reservoirs. A young Shelduck stayed throughout, preferring the shelter of No 1 reservoir to the North Sea mud-flats. Shoveler numbers peaked at 116 on the 16th, slightly higher than last year's maximum total of 110..The easterly airflow mid-month saw a surprise influx of Wigeon with the first recorded on the 16th, nine next day and at least twelve on the 19th and 20th with birds seen regularly through the rest month. For comparison, none were seen in September  last year. 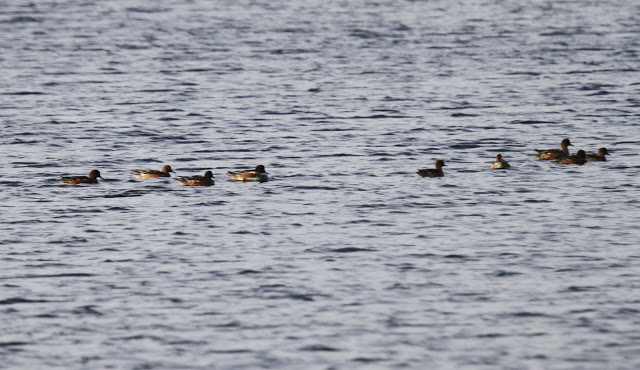 A smart Pintail was found by TR on the 2nd on Lockwood with it or another seen on No 1 on the 20th and again on East Warwick on the 24th and 28th. The longer it stayed, the clearer it became that it was a male. London has a large naturalised population of both Mandarin and Red-crested Pochard but, despite the seemingly good habitat, they rarely visit the reservoirs. A duck found by RE hiding on the southern island of High Maynard on the 22nd was, after careful study of photographs, confirmed as a juvenile Mandarin as he suspected. As usual for the species, it soon slipped away unnoticed. 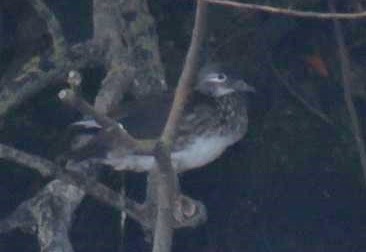 A young Mandarin made a typically brief appearance on High Maynard pic @wheresrhys
The eclipse Red-crested Pochard  found by DC on East Warwick on the 2nd was the first of the year and a month earlier than the first in 2019. Tufted Ducks remained in good numbers with a count of 1218 mid-month. But it is getting now very late for Garganey which may be one of the unexpected misses of 2020 while the Wetlands has yet to have a visit this year by Barnacle Geese. 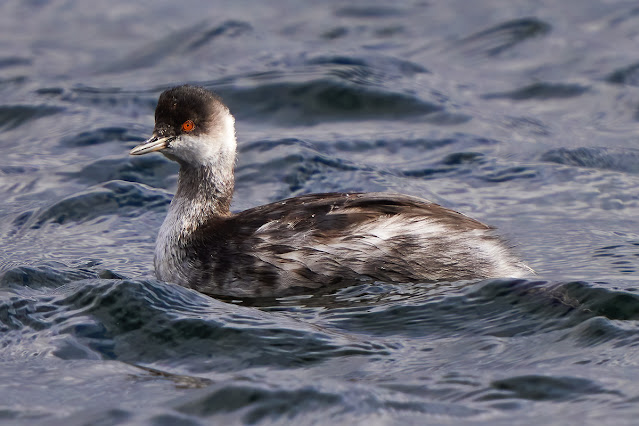 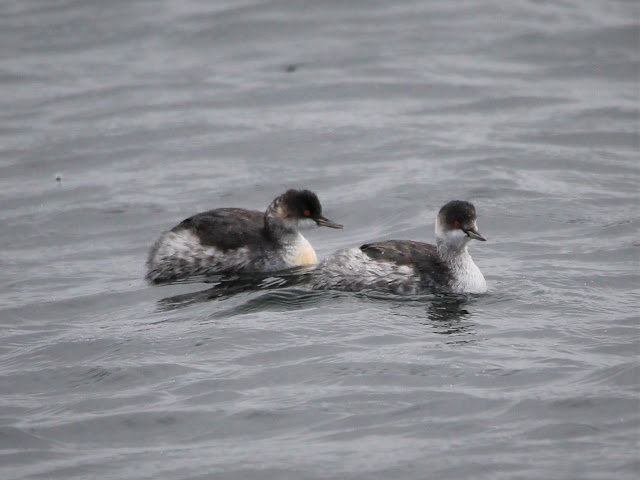 ....and was later joined by a second bird until the end of the month pic @Chris_Farthing
The second record of Black-necked Grebe for the year was found on the 18th on Lockwood and was joined by another on the 25th with both performing well until the end of the month. It was June 2012 when a Gannet - an adult - last turned up at the reservoirs. This time it was a juvenile seen by RE  landing on Lockwood in strong NW winds on the 27th. As it headed south, it collided with power lines but fortunately seemed none the worse as it changed direction and was tracked over KGV and then Hertfordshire. While watching from his loft on the 7th, LB picked up another Great Egret heading north over Lockwood.
After two good months for waders, September was poor with just five species recorded. The highlight was a Ringed Plover LB heard over No 5 on the 11th with the only Oystercatcher also a heard-only record the same day. Single Snipe were seen on the 18th, 19th and 29th with three on the 27th. Common Sandpipers were seen until the end of the month with four on the 21st the highest count while three Green Sandpipers were seen on the 20th and two next day. 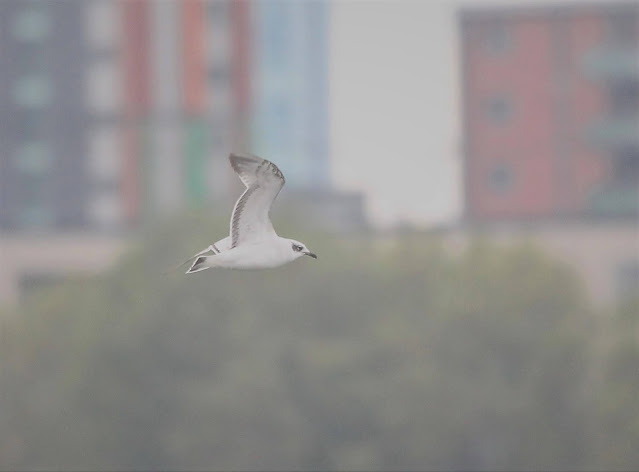 A IY Mediterranean Gull over Lockwood was third of the year pic @Chris_Farthing
The first Water Rail of the autumn was heard on the 20th with another found dead on the main road on the same day. Yellow-legged Gulls were seen on the 20th and 27th while a IY Mediterranean Gull was found by PL over the overflow channel and later over Lockwood. Common Terns lingered on with last record of a family of four on the late date of the 9th.
A Red Kite was recorded on the 22nd with single Buzzards on 5th, 13th, 20th and 21st and 2 on the 10th. Hobby continued to be frequent visitors to the reservoirs with records from at least eight days right up to the 29th with two on the 7th. Last year, there were only two records for the month and just one in 2018. DC was rewarded for an early start on the reservoirs on the 27th when he heard a Tawny Owl hooting from the nearby Paddock. Although it is a species which occurs nearby and must hunt over the reservoirs, this seems to be the first heard or seen from the Wetlands in recent years. 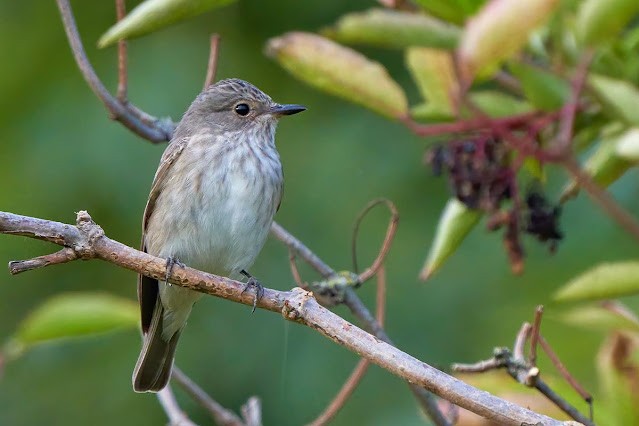 Spotted Flycatchers were enjoyed on five days this month pic @OwlTurbot
The final Swifts of the year were three on the 11th, departing three days earlier than last year. The last Sand Martin was seen on the 25th with a few House Martins, as usual, remaining until the end of the month. Last year's autumn round up commented that ''worryingly low' numbers of Swallows had been seen on passage with a peak count of only 38. This month the total number seen was far below 38 although other sites in the capital don't seem to have seen such a decline. The highest day total was a paltry six  on the 2nd & 20th with the last bird of the month, on a bitingly cold day, on the 27th.
It is always much more difficult to be certain of final rather than first dates for summer visitors. But the Sedge Warbler on the 29th was definitely later than last year's 16th as was Common Whitethroat on the 23rd rather than the 10th. The last Lesser Whitethroat of September was seen on the 26th and Reed Warbler on the 22nd but both can turn up in October as the Lesser Whitethroat did last year. Passage of Willow Warblers petered out mid-month with four recorded on the 15th. 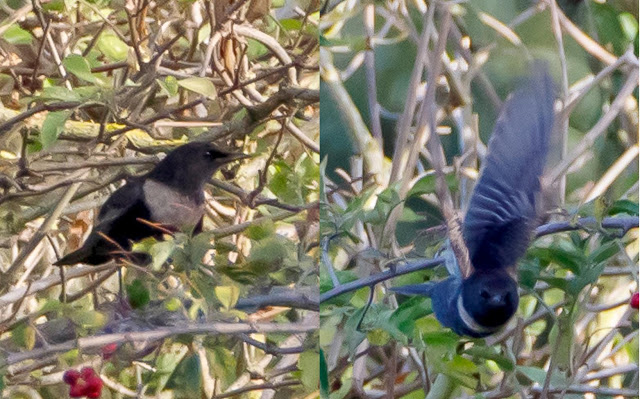 The first Redwing of the autumn were on the early date of the 27th when they were seen across London with seven more next day. Ring Ouzels are usually Spring visitors at the Wetlands so the male which fed briefly on berries early on the 17th before flying onto Tottenham Marsh closed a gap on the year list. 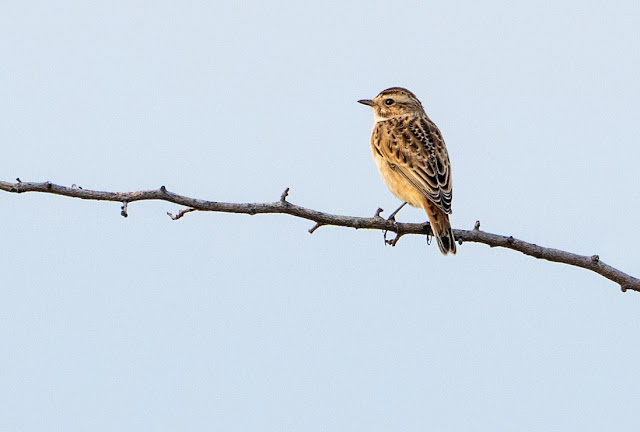 Whinchats are always photogenic ..........pic AMP
Two Spotted Flycatchers were seen on the 1st with singles on the 4th & 5th, 7th, 12th and 23rd. It continued to be a good autumn for Whinchat with two on the 10th, four on the 15th and the last on the 16th. The first Stonechats of the autumn were two on the 14th with a peak count of eight on the 28th during a major movement across London. The highest daily total of Wheatear, however, was just two on the 21st compared to three last year with singles seen until the 26th including at least one likely Greenland race bird. 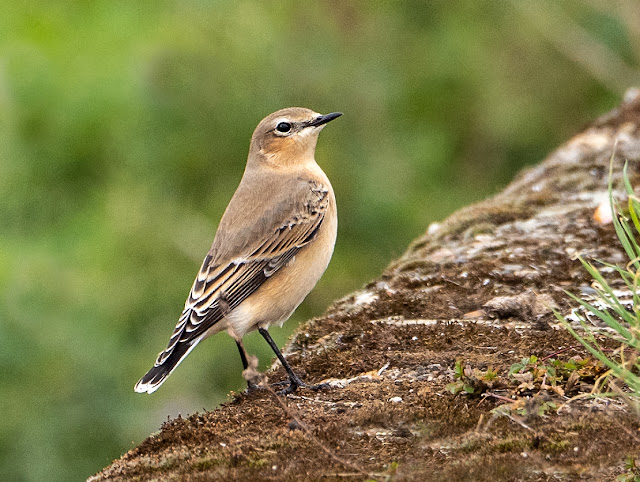 ................... as are Wheatears pic AMP
Yellow Wagtails were few in number with single birds - almost all fly-overs - on the 1st,15th, 18th, 21st and 27th. The first Meadow Pipit of the autumn were two on the the 4th with passage birds seen either resting or passing over regularly in relatively smallish numbers until the end of the month.
It has been a good month for Siskins moving across London and the Wetlands - far from the best place to catch visible migration - did not entirely miss out.  The first record of the year were six seen by PL on the 13th, with three on the 15th, one on the 20th and six more on the 22nd and one on the 26th. On the 22nd, too, NK picked out two Lesser Redpoll - another finch seen migrating in good numbers elsewhere in London but which remains a very scarce visitor to the reservoirs.
DB @porthkillier
Posted by Walthamstow Birders at 18:18