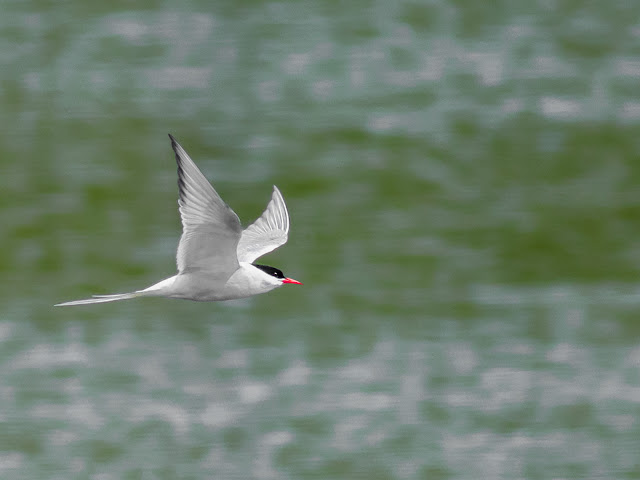 Arctic Terns graced the Wetlands at the month's end pic @rudraskh9
April started very slowly but picked up in the last few days to just about deserve its reputation as the best birding month of the year. The final week saw the first Spotted Redshank since 2017 and first Barn Owl since 2018 with a run of stunning Arctic Terns as well as a Spring Black Tern.
Overall, summer visitors at the reservoirs - as in the rest of the country - were late and certainly later  than last year which was notable for an early Spring. Cold northerlies in the UK and rain in southern Europe got the blame for some pretty barren days. But by the end of the month most of the expected species had been seen, if in lower numbers than usual. 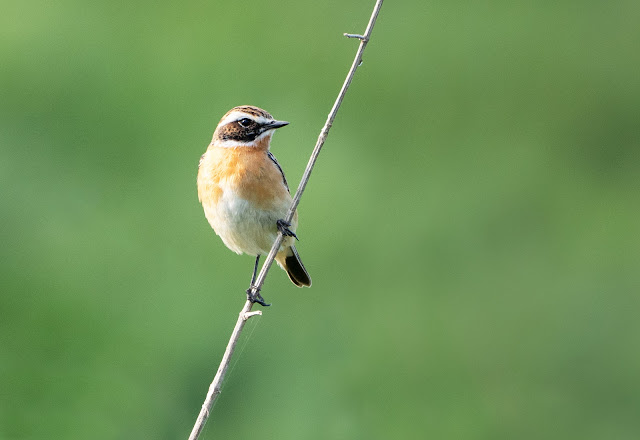 Whinchat was one of the few species seen in higher numbers pic @AMP
Passage Whimbrel,  Greenshank, Little & Mediterranean Gull, Willow Warbler, Whinchat, Yellow Wagtail, Lesser Redpoll and Siskin were new for the year as were Common Tern, Swift, House Martin, Sedge Warbler, Reed Warbler, Whitethroat and Lesser Whitethroat which will all breed at or nearby the Wetlands. April also brought a nice flock of Avocets and a semi-resident Black Redstart.
The 20 additions take the year list so far to 113 - seven behind last year's total but ahead of both the 109 in 2020 and 113 in 2019. Among the obvious gaps in the list are Redshank, Great Egret - there had been an incredible four by this time last year - and Red-crested Pochard while Ring Ousel, Nightingale,  Yellowhammer and yet again White Stork were seen just off site. 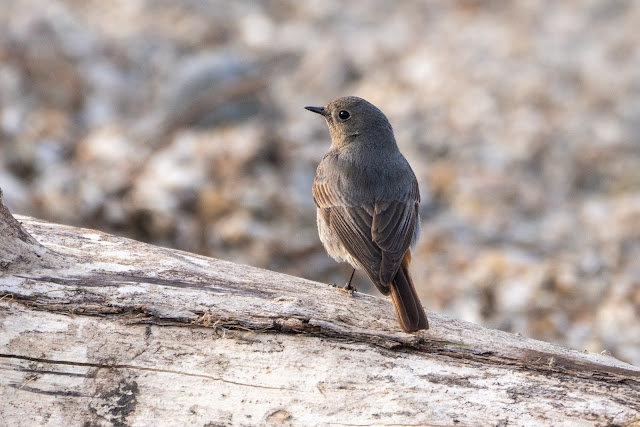 A female Black Redstart took a liking to the south end of Lockwood pic @ AMP
Last year's first attempt by Barnacle Geese to breed at the Wetlands looks likely to be repeated with a pair arriving on the 12th - a month earlier than last year - and again taking up residence on the large No 5 island. They were joined intermittently by up to three more birds with pairs regularly seen flying over Lockwood. March's female Scaup stayed on West Warwick until the 10th, Five Goldeneye remained until 2nd with the final two last seen on the 5th - 14 days earlier than the last wintering bird departed in 2021 but the same date as in 2020. 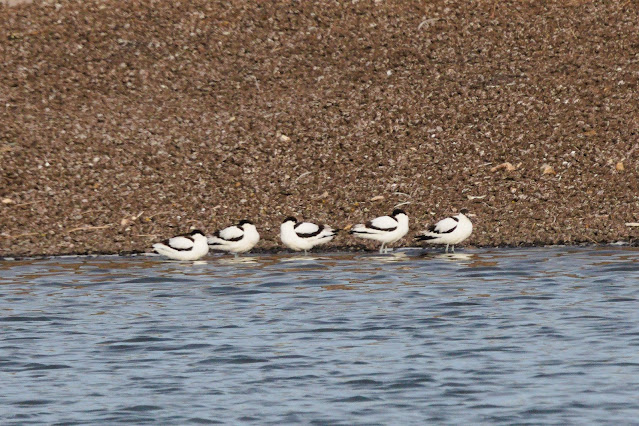 Avocets resting up on Lockwood before resuming the migration  pic @Callahanbirder
Waders generally were few in number but, by the end of the month, there had been a nice range of species. The exception on low counts were the five sleeping Avocets seen early on Lockwood on the 11th which looked as if they may have roosted overnight. Lapwing continue to be scarce with the only record on the 13th. After a flurry of records in late March, Little Ring Plover were also less regular with two on the 2nd and singles on the 8th and 16th. 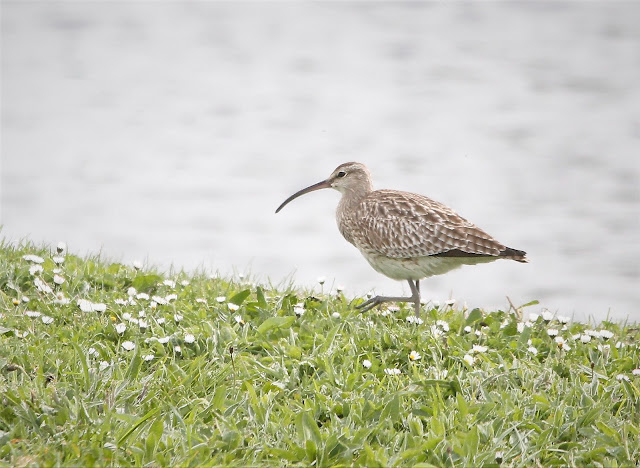 Whimbrel feeding happily on the side of Lockwood and High Maynard pic @Chris_Farthing
April is the month when the first Whimbrel is expected but most don't stop. This year a very tame bird fed on the grassy banks of Lockwood on the 28th just metres from its admirers. The second Dunlin of the year dropped into East Warwick late on the 1st. The wintering Common Sandpiper on No 5 was joined by more migrant birds as the month went on with a peak count of seven across the site on the 29th.  Green Sandpiper numbers also built with singles on 11th and 22nd, two on the 16th and three on 23rd & 24th. 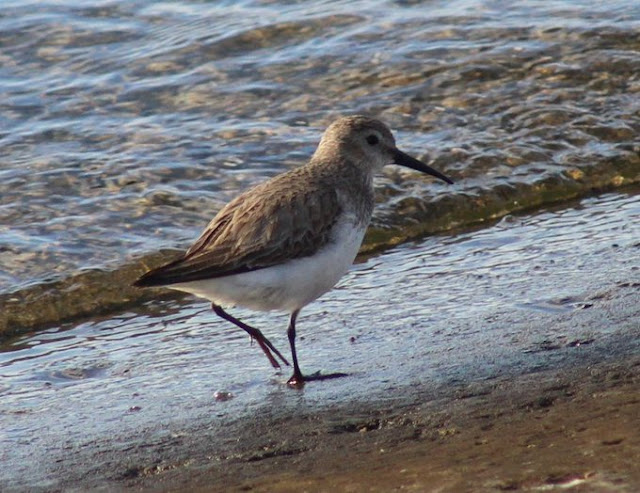 A winter-plumaged Dunlin dropped briefly onto East Warwick  pic @Apaturailia15
Good odds could have been got on Common Redshank being the last 'shank' to be seen at the Wetlands this year but that's what has happened. While there has yet to be a Common Redshank record, JP found the first Spotted Redshank since 2016 on Lockwood on the 29th. When searching for it later, LB instead came across a Greenshank on the same reservoir to show that birds do drop in all the time. 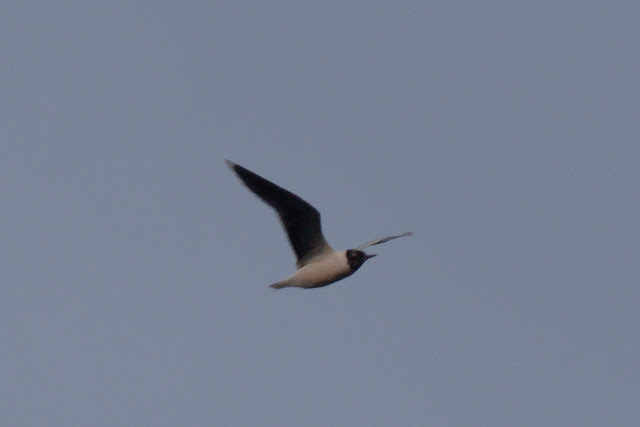 The sole Little Gull of the month flew high over Lockwood  pic @CallahanBirder
April last year was exceptional for terns and gulls with multiple records of both Kittiwake and Little Tern along with flocks of Little Gulls which had become a feature of recent Springs. There was no repeat this month with just a single Little Gull found by DC over Lockwood on the 11th. Two near-adult Mediterranean Gulls which went over calling were a bonus for those watching the Arctic Terns on East Warwick on the 30th. 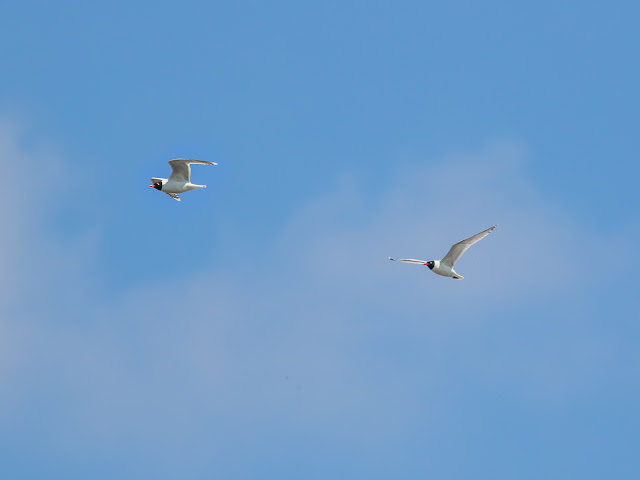 The first Mediterranean Gulls of the year flew over high pic @rudraksh9
The first Common Tern was seen passing through on the 13th, nine days later than the first record last year but five days earlier than the year before. But our - hopefully - breeding birds were very regular making the long journey back from southern Africa to return on the 19th, exactly the same day as last year. Numbers built up as the month passed with pairs seemingly interested in both the rafts - complete with decoy terns - on West Warwick and on Lockwood. They included again a bird sporting a ring from the southern Africa scheme. 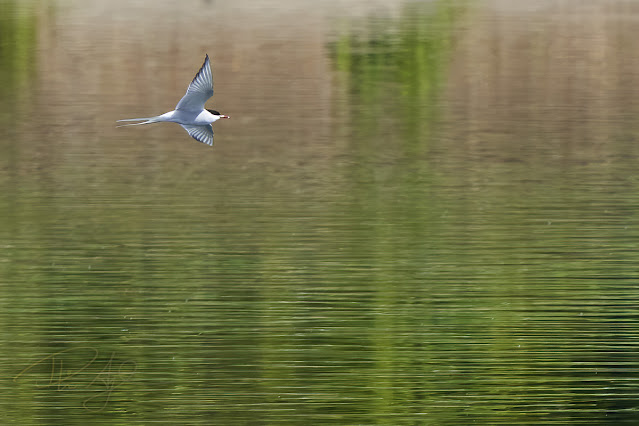 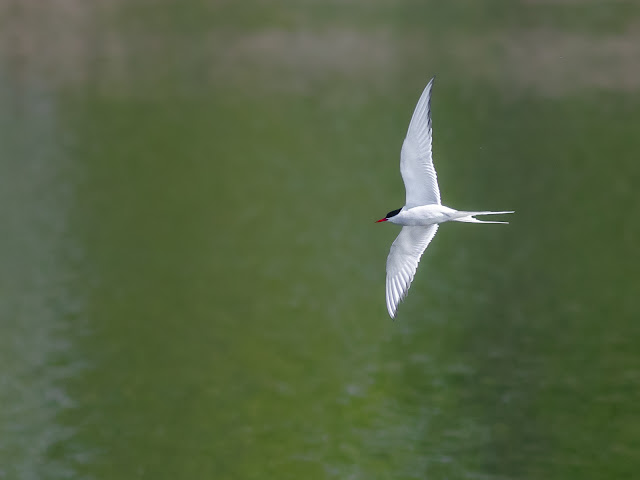 Their noisy displays doubtlessly encouraged Arctic Terns to pause on the northward migration. The first two appeared on East Warwick on the 25th, with singles on the north side on the 28th & 29th before another pair put on a nice display on East Warwick on the 30th. A summer-plumaged Black Tern, found by RT as he was fly-fishing on the 26th, was not so obliging as it evaded all but T & PR. 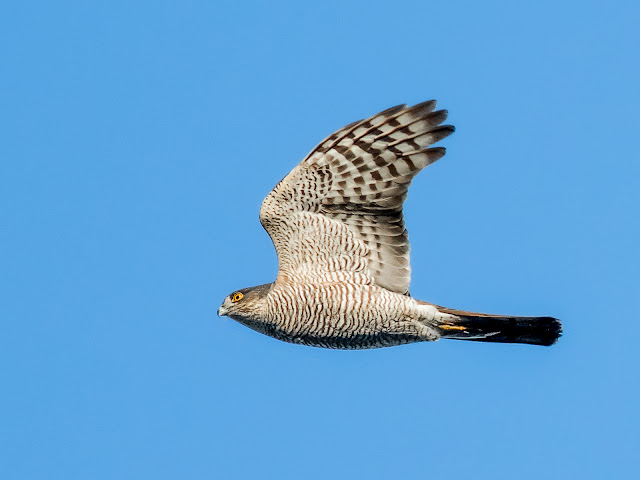 Sparrowhawks regularly displayed and hunted over the Wetlands pic @rudraksh9
Red Kites were recorded on five days - one more than last year - with two on the 21st while single Buzzards were seen on six days, three less than in 2021. Sparrowhawks were seen regularly but Peregrines less so as they appear to be nesting closer to Walthamstow town centre this year.
Unusually, there was no passage Short-eared Owl this Spring but instead a Barn Owl was seen flying in broad daylight over the north end of Lockwood on the 28th before continuing along the flood relief channel. It is the first record since 2018 although occasional reports from the night security team of owls hunting over Lockwood suggest they may be more regular.
Swifts were late with the first only turning up on the 25th - fortunately on the final day of the Wetland's 'guess the arrival date' competition. It was the same date as the first arrived in 2020 but 12 days behind last year. Numbers had hardly reached double figures by the end of the month. 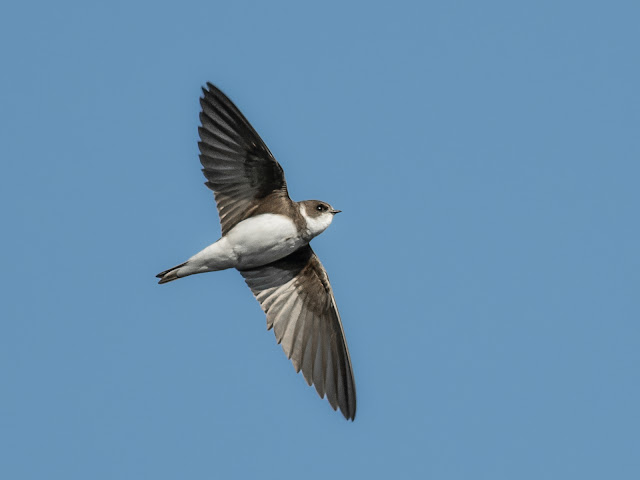 Sand Martins remained scarce until the last week of the month pic @rudraksh9
The same story of late arrivals and low numbers was true of  martins and swallows as well. A single House Martin was seen on the 8th, three days later than last year. There was then a big gap until the 21st when three were feeding over their filter beds where they breed. Sand Martins remained very scarce - with some completely blank days - until the last week. Swallows were even more infrequent with just the odd bird feeding over the reservoirs until a rush at the end of the month with 50 on the 28th and 100 seen feeding over West Warwick next day. The second Skylark of the year was seen on the 8th.
It was a very poor year for Willow Warbler at the Wetlands. The first was a week later than usual on the 7th and there were only records on four more days with a 'peak' of two on the 9th when usually there is one day at least with nearly double figures singing across the site. Sedge Warblers were also slow to arrive with the first on the 11th, nine days later than last year although there were several singing by next day. The first Reed Warbler was heard on the 12th, again five days later than last year but, by the end of the month, they were chuntering across the site. . 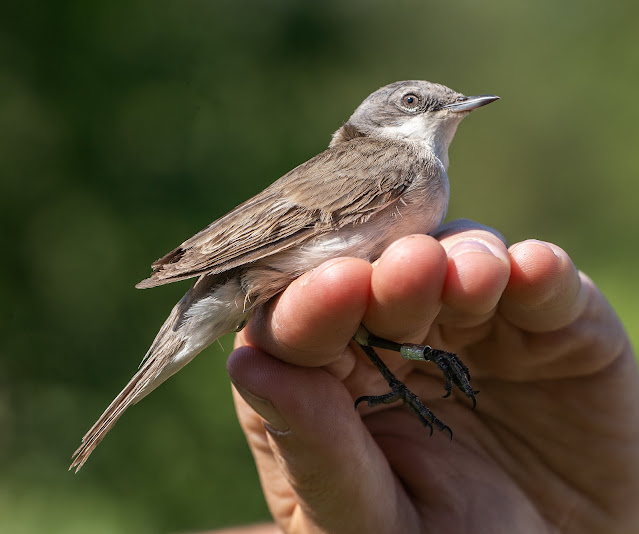 Two Lesser Whitethroats were caught before they had actually been seen pic @ AMP
Arrival dates for both Common and Lesser Whitethroat were also later than last year. The first Common was seen on the 14th, nine days behind last year although they could soon be heard singing in good numbers. An unseen Lesser Whitethroat was heard on the 28th with two birds caught during the opening ringing session of the year on the 30th. . 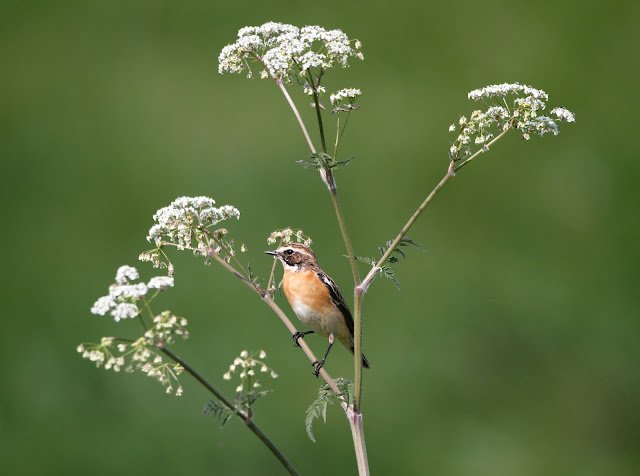 Whinchats were among the most enchanting visitors this month pic @Chris_Farthing
A female Black Redstart was seen on the 24th, 29th & 30th on the north side suggesting it may be hanging around looking for a breeding partner. Whinchat was the one species seen both earlier and in larger numbers than last year. While it was not recorded in 2021 until May, the first this year was found by AMP on the 15th with others on the 21st, 24th and 27th. Wheatears were seen regularly from the 4th with a peak of six on the 13th.  By the end of the month, some showed characteristics of the larger Greenland race. 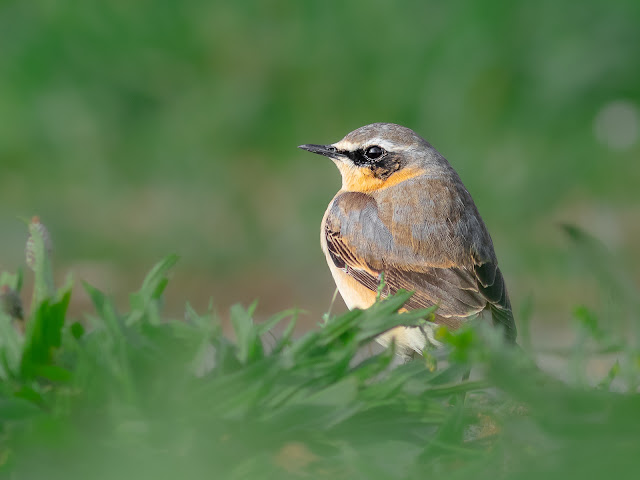 Wheatears passed through in reasonable numbers pic @rudraksh9
There was no repeat of last year's exceptional passage of Yellow Wagtails which saw a flock of 15 on one day late in the month. The first record was not until the 23rd, three weeks later than last year and well behind both 2020 and 2019, followed by four on the 28th and 29th and two on the 30th. SJ's sharp hearing added both Siskin and Lesser Redpoll to the year list with single birds going north on the 8th. 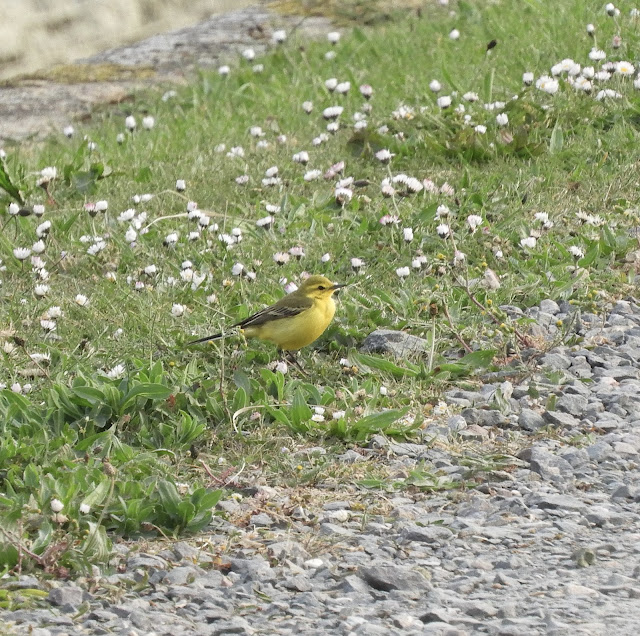 Posted by Walthamstow Birders at 20:26