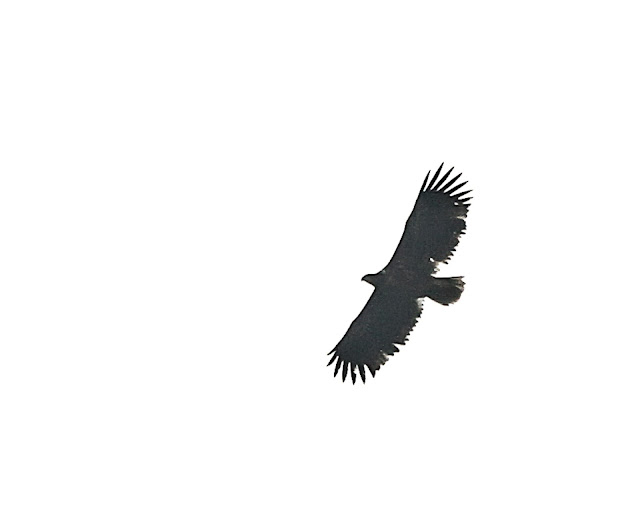 The Wetlands' first ever White-tailed Eagle was the stand-out bird of an excellent month which swept aside the doldrums of January and February. The eagle will long live in the memory of those lucky enough to see it but there was also plenty of interest - from first to last - for those not at the reservoirs that day. Among the highlights were multiple Garganey, Black Redstart, Curlew and Scaup  - each more notable than anything which had turned up in the first two months of 2022. 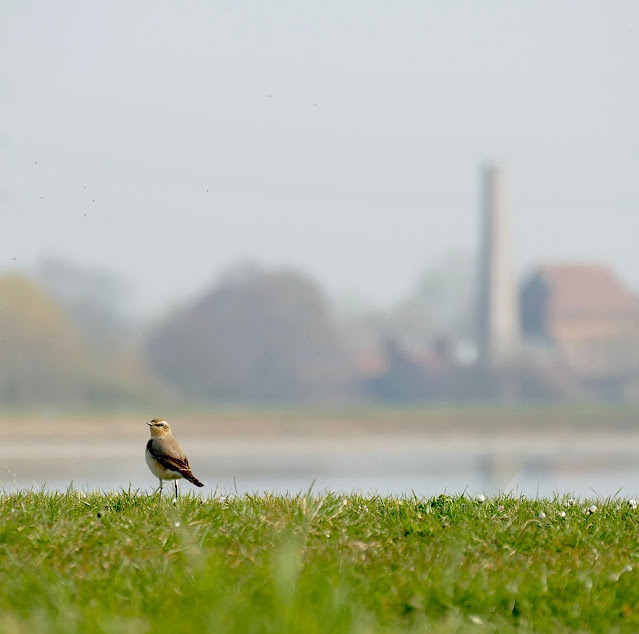 Wheatear posing in front of the Engine House pic @HarringayBirder

March also saw a nice selection of waders including the first Avocet, Dunlin, Oystercatcher, Little Ringed Plover and Black-tailed Godwits of the year. Summer migrants were a little later and slower to arrive than usual but the first Wheatear, Sand Martin and Swallow just about made it through the rain and cold. The month also saw the first Rook and Skylark along with a pair of Mandarin, the first  for 18 months. The 16 additions take the year list so far to 93 -  two behind last year but the same as 2020 and four more than 2019. 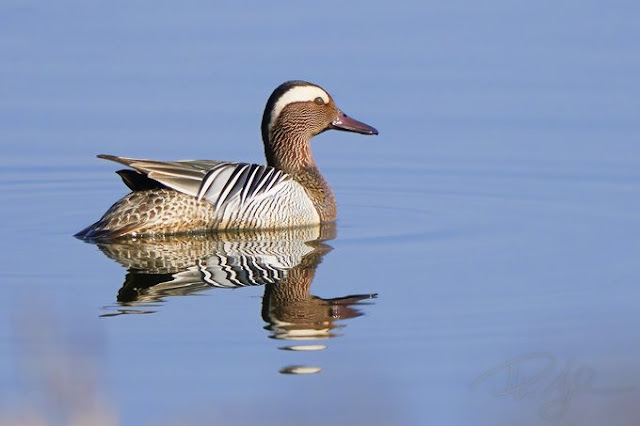 Garganey graced the Wetlands this month pic (above) @OwlTurbot and @giles_greenwood 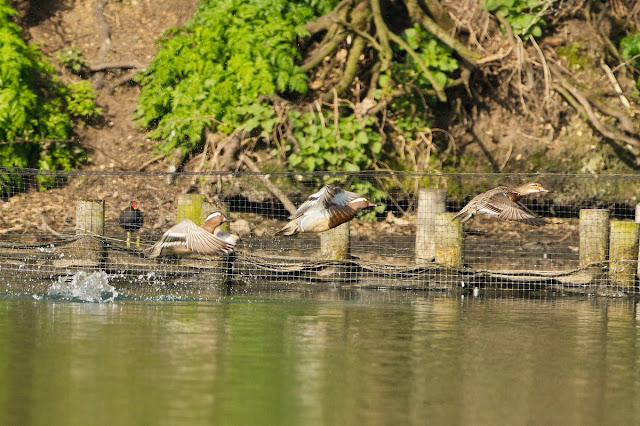 Mandarin, like Red-crested Pochard, are surprisingly rare at the Wetlands despite being widespread in London. The pair which made a typically brief visit to the north side on the 29th were the first since August 2020. Garganey may be more frequent but they are also much more prized - and wilder. CF found the first three of the year on No 1 on the 22nd with what seems likely to be one of the two drakes staying until the 31st. What was presumably another pair was found on Low Maynard on the 30th. 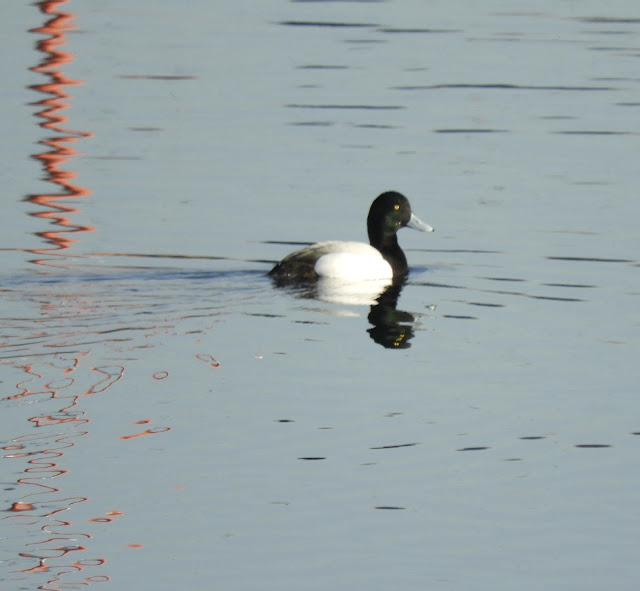 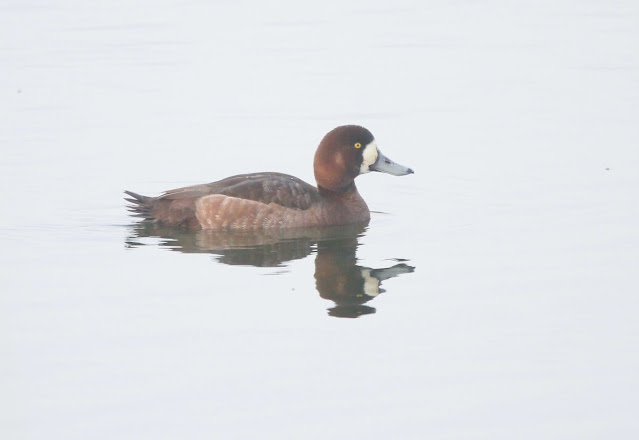 It has been a good winter for Scaup in London but it looked as if the Wetlands, a traditional site, might miss out until a one-day drake was found on the 15th. A second bird - a female -  found on the 25th was more obliging and remained into April. Five of the wintering six Goldeneye - just like last year - also stayed to the end of the month while the last Goosander of the winter were a pair on Lockwood on the 12th. 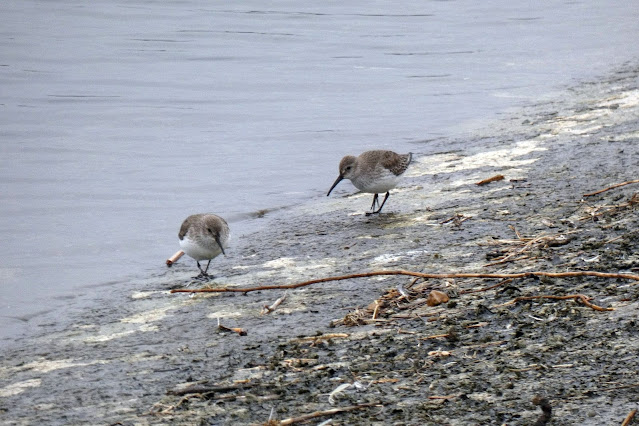 These two Dunlin made a brief stop on East Warwick pic @TG
After two poor months for waders, March opened the tap. The first were two short-staying Dunlin on East Warwick found by TG on the 1st. They were followed by two Curlew photographed in flight by SN on the 5th with a third bird being seen on 27th and 28th when, unusually, it landed on the East Warwick island. 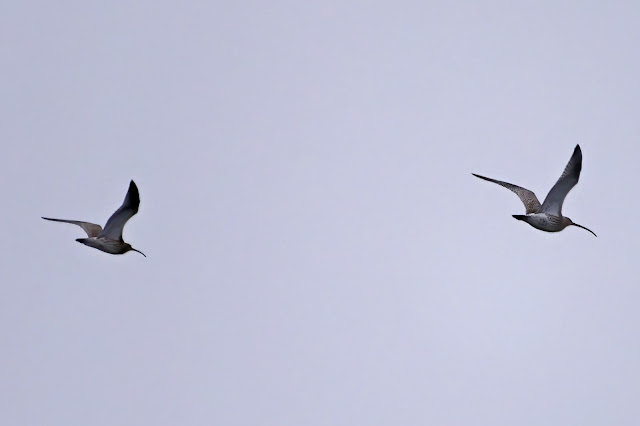 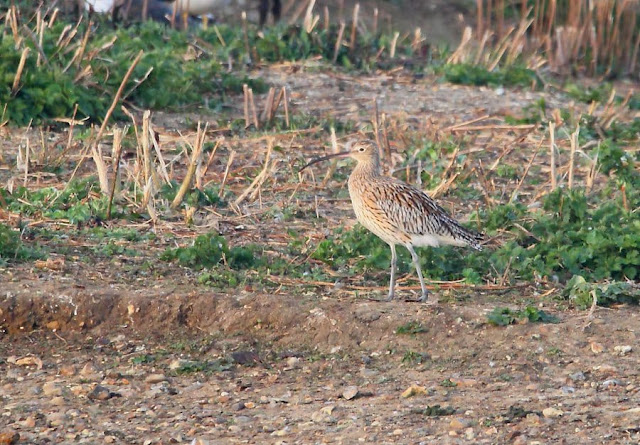 Oystercatchers are among the Wetland's noisiest visitors and the first pair of the year on the 12th were hard to ignore with another on the 23rd. Avocet has become more regular at the reservoirs in recent years so the single seen flying south on the 14th was not as unexpected as it once was. It is the third year on the run this elegant wader has turned up in March and the third consecutive year it has been been found by LB from his loft overlooking Lockwood. 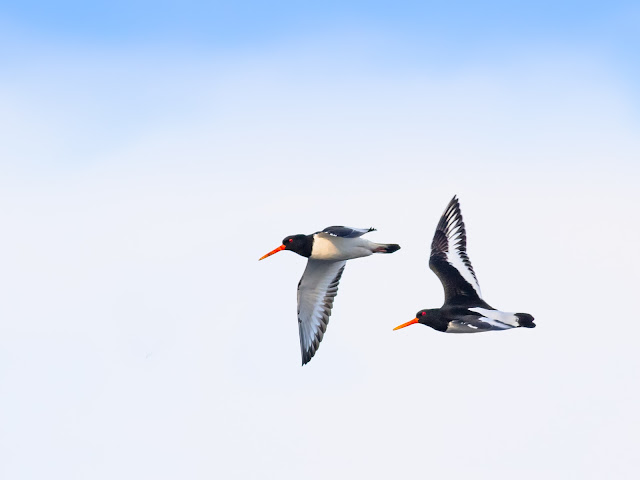 Oystercatchers making a noisy tour of the Wetlands pic @rudraksh9

The first Little Ringed Plover was found by DC on the 18th, around the average arrival time but well ahead of last year when it did not turn up until early April. There were regular records until the end of the month, usually on Lockwood. Two Black-tailed Godwit high towards the Thames on the 29th was the first time since 2019 the species has made it onto the year list before July. Add in the wintering Common Sandpiper throughout the month with what was perhaps the first migrant on Lockwood on the 26th and Green Sandpiper again on the flood relief channel on the 7th and eight species of waders were seen. 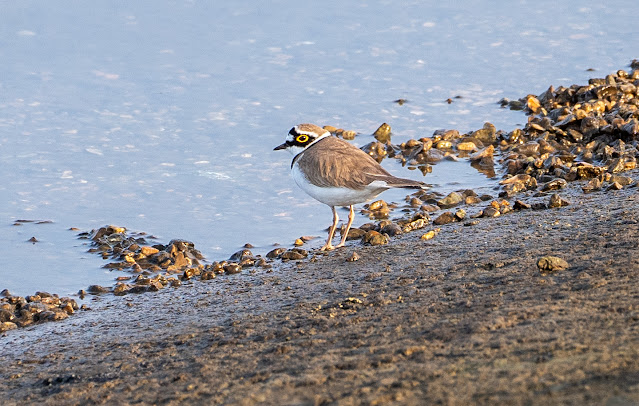 March is also usually one of the better months for birds of prey and that was certainly the case this year. Red Kites were recorded on the 18th, 20th and 21st and Buzzard on the 12th, 22nd, 24th and 29th while Sparrowhawk and Peregrine could be seen regularly displaying over the Wetlands. But what those searching the skies did not expect to see on the 30th was a White-tailed Eagle drifting high south. 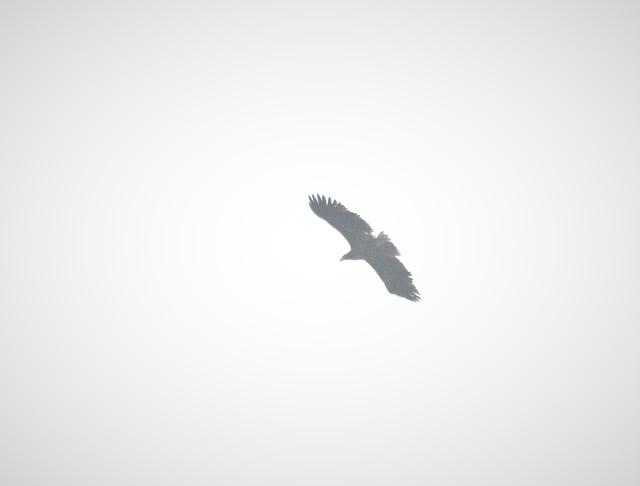 So large that it is known affectionately as the flying barndoor. it was first spotted by TR who immediately put the news of a large raptor out. The alert enabled LB to run up to the Engine House balcony and positively identify it as a White-tailed Eagle and CF to take the all-important photographs as it soared higher for its crossing of London.

Thanks to its tracking device, it could be identified as a second-year male from the re-introduction scheme on the Isle of Wight which was enjoying a tour of the country. It had travelled 667 km in five days on its way back to the south-coast.  While strictly not countable on the year list as the Isle of Wight population is not yet self-sustaining, it seems churlish to ignore such a big event and bird. 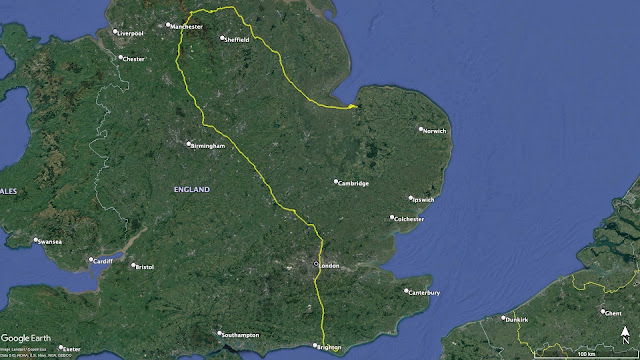 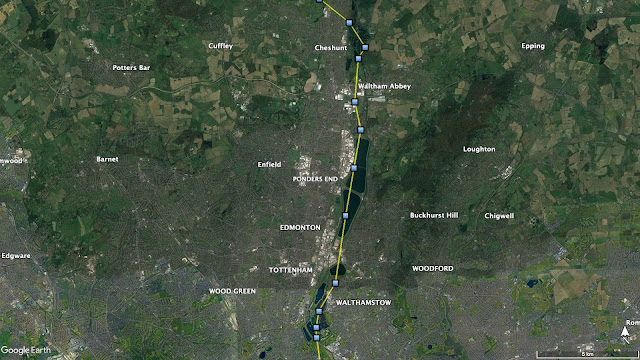 Rather more humdrum, March lived up to its reputation as a good month for scarcer crows with Jackdaw being recorded on several days and a pair of Rooks seen going north by LB on the 23rd. Skylark is also expected in early Spring with the first on the 18th.
Rain over the Mediterranean and later cold northerly winds at Walthamstow probably explains why migration was both late and slow. The first Sand Martins did not arrive until the 13th - ten days later that last year - when four were found by DB & IH with the visiting RSPB North East London group. They remained scarce until April with daily numbers struggling to reach double figures compared to 90 counted on one day last year at the end of the month. The first Swallow scurried across Lockwood on the 29th on exactly the same date as last year but it was the only one seen this month. 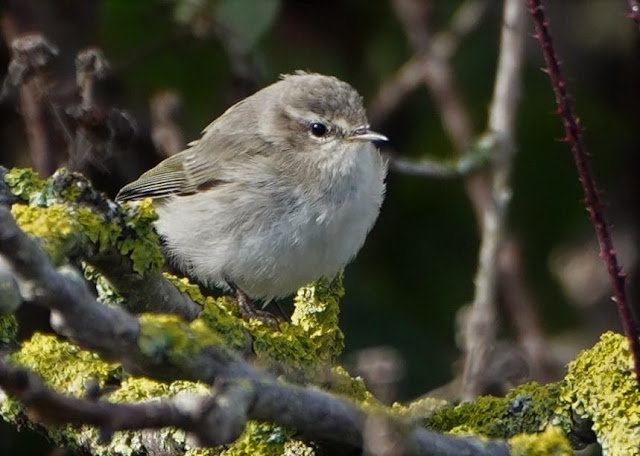 This grey Chiffchaff's call and song confirmed identity as the Siberian sub-species pic @AMP
Even these paltry numbers were better than for Willow Warbler with no records for the whole month when the first singing bird usually turns up by April. Blackcaps and Chiffchaffs did arrive and could be heard across the site. The Chiffchaffs included a singing and calling bird of the Siberian form found by CF on the 2nd which confirmed the probable but silent bird in the same area at the end of February.  It was seen and heard irregularly until mid-month. 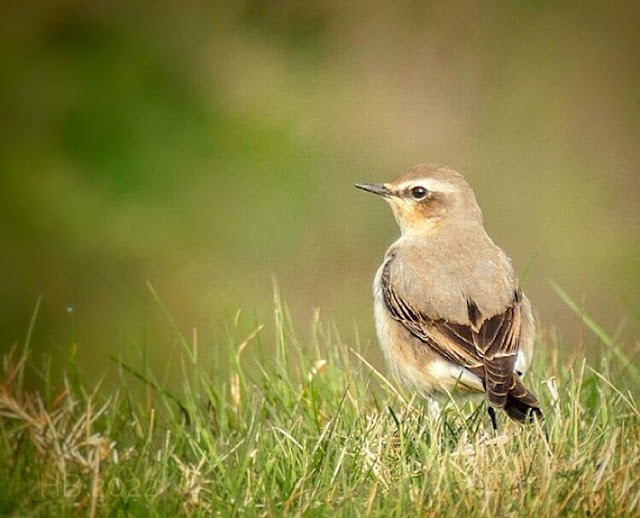 An early female Wheatear oblivious to the happiness she sparked pic @HarringayBirder
The arrival of no species is more anticipated than the first Wheatear of the year. This March it was seen on the 22nd - six days ahead of last year when lockdown put much of the reserve out-of-bounds but six days later than in 2020. In keeping with the slow Spring, the only other records were an early female on the 25th and males on the last four days of the month. The Wetlands shared in a good migration of Black Redstarts across London this month with a male seen briefly by T &PR on the 25th and a female on the 28th & 29th.  The wintering pair of Stonechats seemed to have disappeared on the 2nd with a probable migrant seen on the 24th. 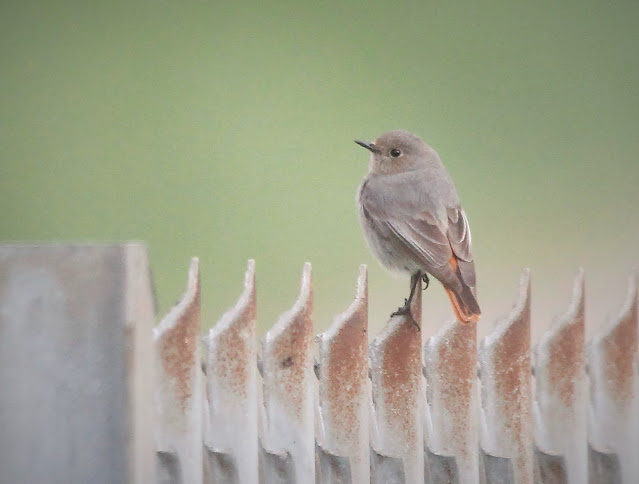 Winter thrushes continued to be in small numbers with 10 Fieldfare on the 5th and 22 Redwing on the 29th among the highest count. One species which got away was a probable Water Pipit on the 11th so the species may now have to wait until the autumn to make it on the year list.

Good news is two species which have suffered serious declines in recent decades continue to make a strong recovery. House Sparrows, once restricted to colonies at the extreme north and south of the Wetlands, have now spread so widely they are now making use of the Engine House 'Swift' tower as a new nesting site.  Greenfinches, too, have bounced back and are singing and displaying across the Wetlands. 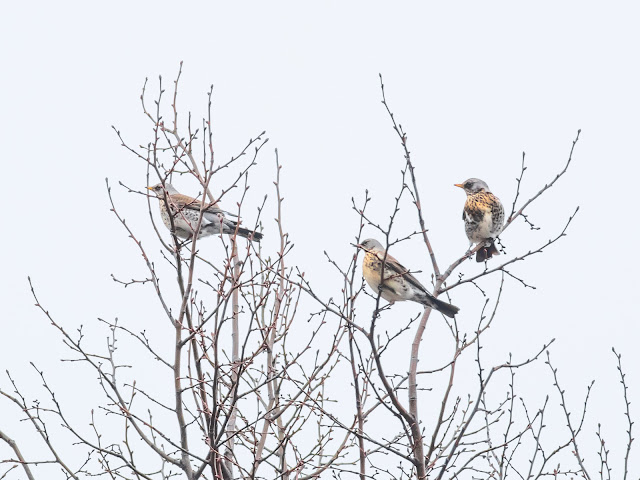 Fieldfare were seen in small numbers this month pic @rudraksh9

Posted by Walthamstow Birders at 14:40