'Cach' of the Day

After not seeing the Brambling last week (though finding a Little Gull) and then hearing it had been seen again this week I thought I had better have another crack today. I was joined by Jamie ‘Larry the Larus Lover’ P but we drew a blank, not a problem for him as he caught up with it on its first day but a bit of a disappointment for me. I did catch up with the Scaup which was sleeping on No.4 and Jamie got Common Sand for the year.

We went South around No.5 mainly to see what was on the filter beds, it was not a pleasant experience as you are looking through one or two fences at distant Gulls but someone has to do it, we were rewarded with quite a few Great Black-backed Gulls and a 1st winter Yellow-legged Gull, it worked out well for JP too as the Barnacle decided to wander through our line of vision.

Aside from a calling Water Rail by the diagonal bridge there was little to get excited about on the Southern section. I must admit I was all for giving up but Jamie was keen to have a look at the Lockwood and I still needed Goosander so we traipsed up to the Lockwood. Viewing from the tower at the Southern end I spotted an almost certain adult Yellow-legged Gull pretty well at the top end, we needed to see it a bit better and Jamie was all for walking up there (far too much energy that boy!). Fortunately the bird took pity on us (me) and flew the length of the reservoir and confirmed its identity. It appeared to land behind the second tower and I stepped to the right to see if I could relocate it, as I did so I noticed a stunning, leggy, white-headed dark-eyed/billed beauty stood standing on the raft. It looked full of Eastern promise and I hurriedly got my scope on it, it looked like a Caspian Gull but was directly facing us, we needed to see it side on. We scooted along the bank and got side-on views. By now Jamie was salivating, I think Caspian Gull is one of his favourite birds. We took a few shots and I decided to try and live stream it to the world.

I wondered about putting the news out by phone (sorry folks) but realistically it was ever going to be twitchable and sure enough it flew off after about 5 minutes though strangely went South and seemed to drop onto No.4 in complete contrast to the thousands of Gulls that were streaming North to the Chingford reservoir roost. The mind boggles at what must fly over the patch every night, we did look but even Jamie can’t identify Gulls by silhouette. 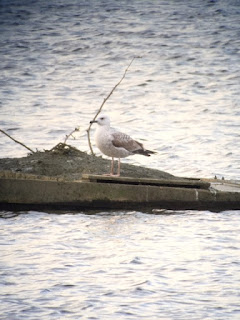 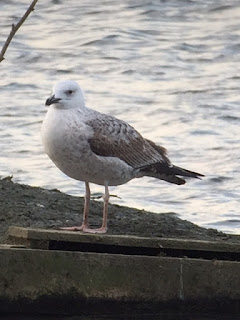 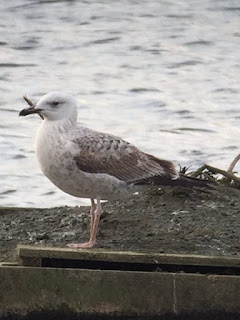 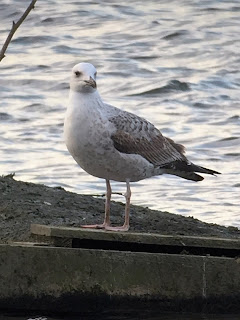 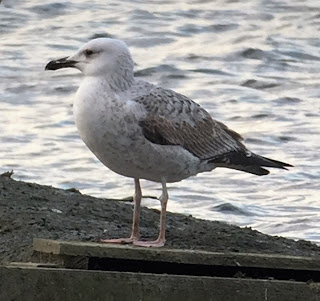 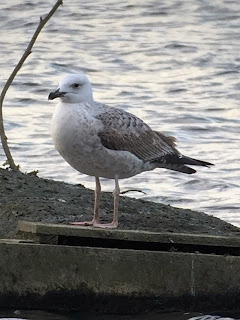 I wonder what Gull I will find the next time I don’t see the Brambling?

@birdingprof
Posted by Walthamstow Birders at 19:12